Adolescents’ Reactions to Adverts for Fast-Food and Confectionery Brands That are High in Fat, Salt, and/or Sugar (HFSS), and Possible Implications for Future Research and Regulation: Findings from a Cross-Sectional Survey of 11–19 Year Olds in the United Kingdom
Previous Article in Journal

Interrelation of Individual, Country and Activity Constraints in Motor Activities of Daily Living among Typically Developing Children: A Cross-sectional Comparison of Spanish and Dutch Populations
Previous Article in Special Issue

In the drinking water reservoir ecosystem, phytoplankton and bacteria play important roles in shaping freshwater health and function. In this work, the associated bacterial community functional diversity during degradation of phytoplankton was determined using the substrate utilization profiling (BIOLOG) technique, meanwhile, the composition and concentration of phytoplankton were examined using a microscope. The results indicated that Euglena decreased 58.33% from 0 to 38 d, while the smallest degradation of Bacillariophyta was 20.19%. Average well color development (AWCD590nm) increased during the static periods from 0 to 38 d; however, the AWCD590nm of 18 and 38 d had no significant difference (p < 0.05). The Simpson’s index (D) was in accordance with Shannon’s diversity (H) and species richness(S); it was measured to be18 > 38 > 5 > 0 d. There were significant differences in the pattern and level of carbon sources used by the phytoplankton-associated bacteria. In addition, the principle component analyses (PCA) suggested that the first principle component (PC1) and the second principle component (PC2) explained 46.76% and 21.49% of the total variation for bacterial community, respectively. Redundancy analysis (RDA) revealed that cell abundance of phytoplankton was negatively correlated with the AWCD590nm, amino acids and other functional indexes. Therefore, the data suggest that there are differences in the phytoplankton-associated bacterial community functional diversity during different static stages of water samples collected from the drinking water reservoir. View Full-Text
Keywords: phytoplankton; associated bacteria; BIOLOG; functional diversity phytoplankton; associated bacteria; BIOLOG; functional diversity
►▼ Show Figures 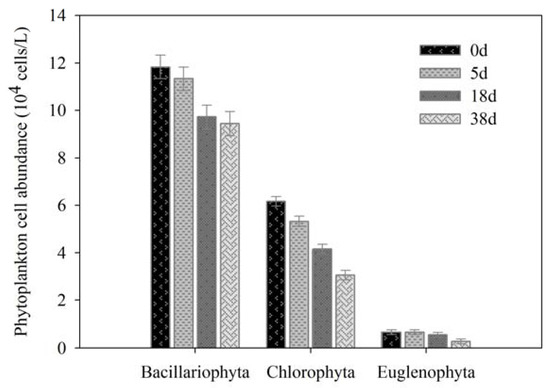