The Association between Physical Fitness Performance and Abdominal Obesity Risk among Taiwanese Adults: A Cross-Sectional Study
Previous Article in Journal

Assessing and improving public knowledge of atrial fibrillation (AF) could increase its detection rate and the subsequent use of stroke prevention therapies. However, there is no validated AF knowledge assessment tool applicable to the general population, including those at risk of AF. Therefore, we aimed to develop and validate such a tool. The tool was developed from a literature review and discussion with subject matter experts. Content validity was ensured by a ten-member panel of experts comprising cardiologists and pharmacists. An online validation survey was conducted and reported based on the Checklist for Reporting Results of Internet E-Surveys (CHERRIES). The survey evaluated the tool performance by construct validity, internal consistency reliability, item discrimination, difficulty index and ease of readability. The survey participants included 14 general medical specialists, 20 fourth-year and 33 second-year undergraduate pharmacy students, and 122 members of the general public. The tool had satisfactory content validity, with a scale content validity index of 0.8. The mean percentage knowledge scores for general medical specialists and fourth-year pharmacy students were higher than second-year pharmacy students, followed by the general public (92.9%, 87.6%, 68.5% and 53.4%, respectively; p-value < 0.001), supporting construct validity. The tool had good internal consistency reliability (Cronbach’s alpha = 0.91). The item-total correlation was in the preferred range of 0.23 to 0.71. The Atrial Fibrillation Knowledge Assessment Tool is a valid instrument and can be used to investigate AF knowledge of the general population. View Full-Text
Keywords: atrial fibrillation; knowledge; assessment; survey; validation atrial fibrillation; knowledge; assessment; survey; validation
►▼ Show Figures 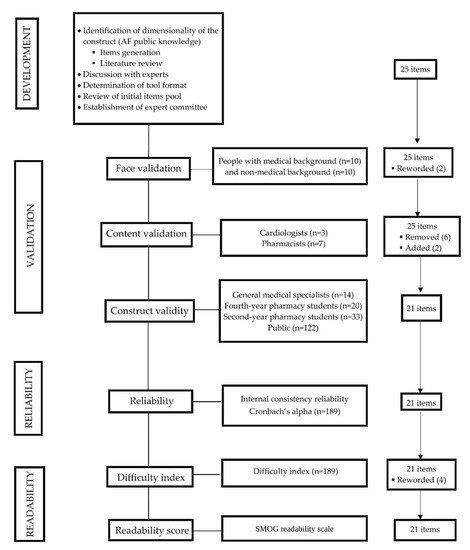