The Effects of Performance of Public Sector Health System on Quality of Life in China: Evidence from the CGSS2015
Previous Article in Journal

“Digging Deeper” into the Relationship Between Safety Climate and Turnover Intention Among Stone, Sand and Gravel Mine Workers: Job Satisfaction as a Mediator
Previous Article in Special Issue

Assessment of the Quality of Life in Patients before and after Coronary Artery Bypass Grafting (CABG): A Prospective Study

A Discrete Choice Experiment on Women’s Preferences for Water Immersion During Labor and Birth: Identification, Refinement and Selection of Attributes and Levels

Objectives: To identify attributes (i.e., characteristics describing a scenario) and levels (i.e., each characteristic may be defined by a different level) that would be included in a discrete choice experiment (DCE) questionnaire to evaluate women’s preferences for water immersion during labor and birth. Methods: A mixed-method approach, combining systematic reviews of the literature and patient focus groups to identify attributes and levels explaining women’s preferences. After the focus groups, preference exercises were conducted and led to the creation of the questionnaire, including the DCE. A qualitative validation of the questionnaire was conducted with women from the focus groups and with medical experts. Results: The literature reviews provided 26 attributes to be considered for childbirth in water, and focus groups identified 14 additional attributes. From these 40 attributes, preference exercises allowed us to select four for the DCE, in addition to the birth mode. Labor duration was also included, even if it was not well ranked, as it is the main clinical outcome in the literature. Validation with experts and women did not change the choice of attributes but slightly changed the levels selected. The final six attributes were: birth mode, duration of the labor phase, pain sensation, risk of severe tears in the perineum during the expulsion of the newborn, risk of death of the newborn, and general condition of the newborn (Apgar) score at 5 minutes. Conclusion: This study allowed us to detail all the stages for the design of a DCE questionnaire. To date, this is the first study of this kind in the context of women’s preferences for water immersion during labor and birth. View Full-Text
Keywords: water immersion; childbirth; preference; discrete choice experiment water immersion; childbirth; preference; discrete choice experiment
►▼ Show Figures 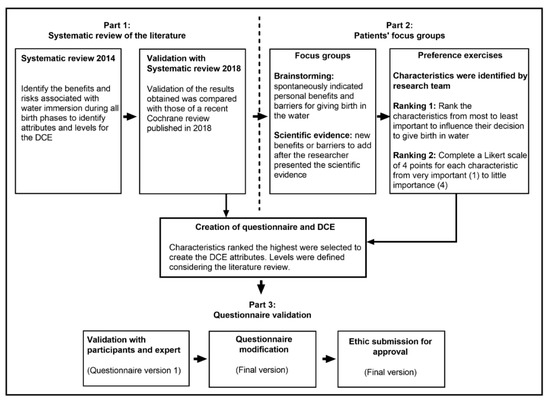