Tinnitus and Self-Perceived Hearing Handicap in Firefighters: A Cross-Sectional Study

In developing and developed countries, air pollution has already become an important health issue. Several factors, such as urbanization, industrialization, heavy traffic, or establishment of thermal power stations, result in air pollution in several countries. Primarily, lung cancer is considered the major severe disease caused by air pollution [1,2]. Notably, accumulating evidence shows that chronic exposure to air pollution is associated with not only respiratory diseases but also non-lung cancers [3,4] and cardiovascular [5,6], inflammatory [7,8], and neurodegenerative diseases [9,10] including age-related macular degeneration (AMD) [11].
Sensorineural hearing loss (SHL) is defined as the damage, degeneration, or loss of the cochlear hair cells (HCs) [12,13] or spiral ganglion neurons [14,15,16] in the auditory system. The majority of SHL patients are diagnosed with congenital SHL including syndromic and non-syndromic SHL. It has been shown that a total of 70–100 genetic loci are associated with SHL. These genetic loci are usually found in genes responsible for signal transduction, membrane ion channel expression, HC development, and aging processes [13]. Most of the genes are directly related to the function of the outer HCs in fine-tuning incoming sound waves. Currently, hearing aids and cochlear implants are clinically beneficial in restoring the hearing function of patients with congenital SHL. However, Food and Drug Administration-approved drugs used to treat congenital or degenerative SHL are not yet available.
Several etiological factors can cause SHL, such as loud noise [17,18], viral infection [14,19], genetic mutations [20,21], accidental events [22,23], ototoxicity [24,25,26], autoimmune diseases [27] and unknown illness-induced sudden SHL [28,29]. Several diseases such as hypertension (HT) [30,31], diabetes mellitus (DM) [32,33], stroke [34], chronic kidney disease (CKD) [35,36], ischemic heart disease (IHD) [37,38], alcoholism [39,40], nicotine dependence [41,42], asthma [43,44,45], chronic obstructive pulmonary disease (COPD) [46], and rheumatoid arthritis (RA) [47] are associated with SHL. Notably, some of these diseases can cause defects in the vascular system and microcirculation in the cochlea, subsequently resulting in hypoxia [48,49,50]. Hypoxia has been demonstrated to damage the HCs and neurons in the inner ear [48,50]. Furthermore, it has been shown that hypoxia-inducible factor-1α is upregulated by cobalt chloride-induced hypoxia in noise-induced hearing loss [51].
Accumulating evidence using the analyses of the National Health Insurance Research Database (NHIRD) in Taiwan shows that chronic exposure to air pollution increases the risk of neurodegenerative diseases including Parkinson’s disease (PD) [9], dementia [10], and AMD [11]. Although air pollution has been considered a risk factor for several diseases, its association with hearing disorders has been less studied. A previous study conducted in Busan, Korea, showed that air pollution is possibly associated with sudden SHL [52]. However, whether air pollution is associated with SHL remains controversial. Therefore, it is significantly interesting to hypothesize that air pollution may also be associated with SHL development. In this study, we focused on investigating the two major traffic-related air pollutants: nitrogen dioxide (NO2) and carbon monoxide (CO). We analyzed the data from a longitudinal cohort study using the Taiwan National Health Insurance (NHI) data to assess the significant effects of these traffic-related air pollutants to SHL.

A single-payer Taiwan NHI program was launched in March 1995. Approximately 99% of Taiwan’s population are included in this program. The NHIRD consists of insured’s inpatients and outpatient claims, medications, and treatment data. In the present study, we utilized the Longitudinal Health Insurance Database which is the health database of a million beneficiaries randomly selected from the NHIRD. The identification information was encrypted to protect the patients’ personal privacy. The disease codes were identified according to the International Classification of Disease, Ninth Revision, Clinical Modification (ICD-9-CM). We recruited subjects aged older than 20 years with no history of SHL from 1998 to 2010, and they were followed up until SHL was observed, they withdrew from the NHI program, and the study ended (December 2011).

We show the demographic distribution as a percentage. The incidence density rates of hearing loss were calculated, and the incidence rate ratio (IRR) was assessed by Poisson regression. We estimated the hazard ratios using the multivariate Cox proportional hazard model, adjusting for age, sex, insurance fee, urbanization, and comorbidities.

Although air pollution has been considered a risk factor for several diseases, its association with hearing disorders has been less studied. In this study, we hypothesized that air pollution may also be associated with SHL development. We focused on investigating the two major traffic-related air pollutants: nitrogen dioxide (NO2) and carbon monoxide (CO). We analyzed the data from a longitudinal cohort study using Taiwan National Health Insurance (NHI) data to assess the significant effects of these traffic-related air pollutants to SHL. Our results revealed that the subjects who were chronically exposed to air pollution were at a significantly increased risk of developing SHL. Based on the longitudinal human data, our results suggest that NO2 and CO could have potential adverse effects on SHL. Furthermore, we showed that long-term exposure to the highest quartile of NO2 significantly increased the risk of SHL by almost 1.63 fold, even after adjusting the confounding factors. Additionally, exposure to the highest quartile of CO also increased the risk of SHL by 1.45 fold. Nitrogen dioxide and CO result in cellular damages through different mechanisms. Nitrogen dioxide is a reactive nitrogen species (RNS). Reactive nitrogen species and reactive oxygen species cause cell apoptosis. On the contrary, CO is considered toxic, as it prevents the blood system from effectively carrying oxygen around the body, specifically to the vital organs such as the heart and brain. However, any report showing the association between CO and SHL does not exist yet. The present study suggests that exposure to CO and NO2 has several adverse effects on the auditory system.
Several studies investigating the clinical effects of air pollution on different organ systems in the human body have been conducted [4,7,8,9,11,53]. Using similar datasets, we have previously shown that CO and NO2 were associated with AMD [11], dementia [53], and PD [9]. Compared with the lowest exposure group, the adj. HRs for AMD and dementia were 1.91 and 1.5 and 1.84 and 1.61 for the highest quartile of NO2 exposure and the highest quartile of CO exposure, respectively. Based on the adj. HRs, our data indicated that these two pollutants have similar adverse effects on SHL, AMD, and dementia. On the contrary, either NO2 or CO is not associated with the incidence of PD. However, particulate matter 10 (PM10) exposure can have significant adverse effects on PD development. Similar to AMD and dementia, SHL is also an age-related disease that primarily affects the cochlear hair cells and spiral ganglion neurons.
The onset of SHL has been associated with several risk factors including inflammation and oxidative stress. Our data further suggest that RNS might also contribute to SHL progression. Nitrogen dioxide is one of the most important components of traffic-related air pollution. It can be hydrolyzed to nitrous and nitric acid, both of which can induce inflammation by oxidative stress and lipid peroxidation. It has been suggested that gentamicin application intratympanally can result in a hearing threshold shift beginning on the second day after gentamicin application. This hearing impairment is simultaneously associated with an increased NO2− (a stable oxidation product of NO2) concentration in the lateral wall, indicating that NO2− contributes to gentamicin-induced hearing impairment [54].
Although the primary route of exposure to NO2 is via inhalation, studies assessed not only the association between the respiratory system and NO2 exposure but also the association between the cardiovascular [55,56] and neurological systems and NO2 exposure [57]. Previously, air pollution has been reported to be a risk factor for sudden SHL [52]. The major differences between our results and the reports of Lee et al. [52] are as follows: (1) our study was the first study to use a large longitudinal cohort from 1998 to 2010 to demonstrate the significant association between SHL and high levels of ambient NO2 and CO. (2) According to the report of Lee et al. [52], they utilized the data from the daily patient numbers admitted to the hospital with sudden SHL in 2015 and demonstrated that in Busan, Korea, there is a statistically significant weak association between the daily numbers of patients admitted to the hospital with sudden SHL and the exposure of mean daily PM10 and PM2.5 concentrations [52].
It has been suggested that the risk of SHL is also significantly associated with factory workers who are co-exposed to noise and heavy metals or organic solvents [58]. Co-exposure to noise and heavy metal or toxic pollution results in a worse SHL compared with isolated exposures [59]. In the present study, both CO and NO2 levels are relatively higher in highly urbanized region and boomtown than in other areas (Table 3). Notably, both noise and air pollution may damage the cochlear HCs via oxidative stress [60], hypoxia-induced reactive oxygen species, and HC damage [48]. Although we found a statistically significant association between air pollution and subsequent SHL, the present study had the following limitations that need to be considered: (1) The noise levels in the studied area and the genetic variants in the studied subjects, which are considered as important risk factors for SHL, were not clarified in the present study, and without the noise-level data, the scope and significance of the study are limited. (2) The study conducted in the assigned residential area was according to the subject’s condition which was associated with the treatment of acute upper respiratory infections in a clinic or hospital, resulting in the underestimation of every subject’s exposure level to each air pollutant in the studied area. However, our findings are still significant and require further investigation. (3) In the present study, we used the ICD-9-CM codes 389.10–389.12 and 388.01 for data acquisition of age-related hearing loss and SHL. However, we did not include the ICD-9-CM codes of sudden hearing loss (388.02) and conductive hearing loss (389.00 and 389.06) considering that only 3.6% (2724 SHL subjects/75,767 subjects) of the subjects were identified as SHL patients in this study (Table 1).

In conclusion, we linked the national health database and air quality database to report NO2 and CO as risk factors for SHL. Our results indicate that the highest quartile of each pollutant could increase the risk of SHL by almost 1.63 and 1.45 fold, respectively. Notably, a mid-level exposure to NO2, but not CO, could also significantly contribute to SHL development by 1.40 fold.

The authors confirm that all data underlying the findings are fully available without restriction. The dataset is owned by the Taiwan National Health Research Institutes (NHRI). Requests for the dataset may be sent via an e-mail to the NHRI at [email protected] or call at +886-037-246166 ext. 33603 for immediate service. Office Hours: Monday–Friday, 8:00–17:30 (UTC+8). 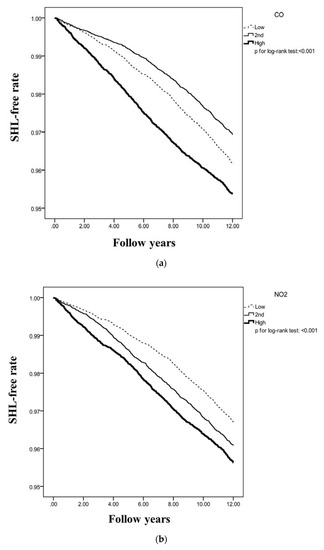 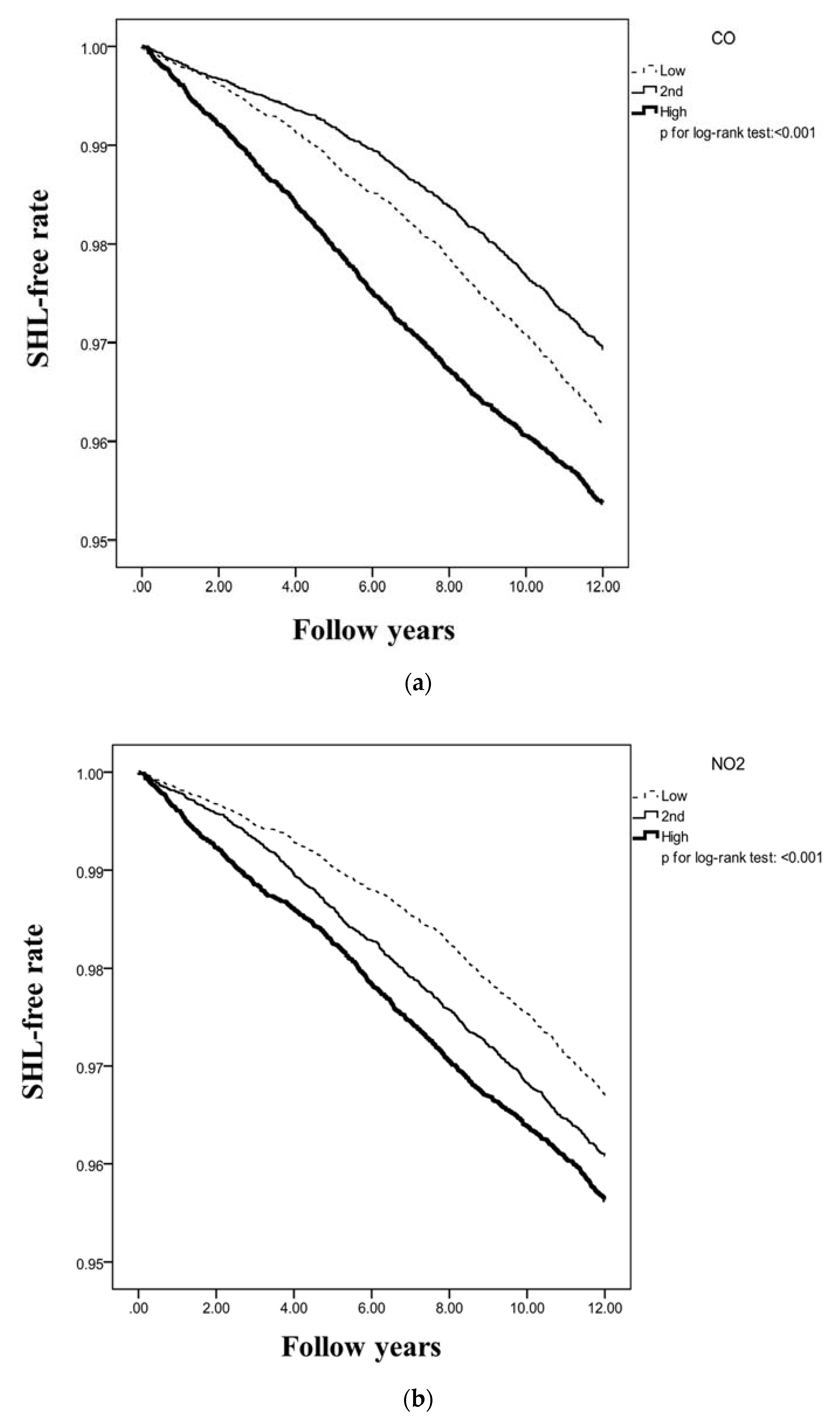