Validity and Internal Consistency of the Preschool-FLAT, a New Tool for the Assessment of Food Literacy in Young Children from the Training-To-Health Project
Previous Article in Journal

Participation to Leisure Activities and Well-Being in a Group of Residents of Naples-Italy: The Role of Resilience

Brain Breaks videos are web-based structured physical activity (PA) videos that aim at stimulating an interest in learning and promoting health. Exercise is one of the important treatment regimens for people with type 2 diabetes mellitus (T2DM). Thus, the objective of this study was to determine the effects that Brain Breaks videos have on the motives for PA, as measured by the Physical Activity and Leisure Motivation Scale-Malay (PALMS-M), and the amount of PA, as measured by the International Physical Activity Questionnaire-Malay (IPAQ-M), in T2DM patients (the most common type of diabetes mellitus patients). This study was conducted using a randomized, double-blind design and grouped subjects under two research conditions: an experimental group given Brain Breaks videos and a control group. Purposive sampling was employed to recruit 70 T2DM patients (male = 39, female = 31) with the mean age of 57.6 (SD = 8.5) from Hospital Universiti Sains Malaysia, Kelantan. Over a four-month period, the participants in the experimental group were asked to perform PA daily based on a Brain Breaks video (10 min in duration) that was shared through a WhatsApp group. All participants from both groups answered the PALMS-M questionnaire five times: pre-intervention, the end of the first month, second month, and third month, and post-intervention. A repeated measure multivariate analysis of variance and a repeated measure analysis of variance were performed for the analyses of the data. The results demonstrated that four (appearance, others’ expectations, physical condition, and mastery) out of eight motives for PA produced a significant mean score difference between the two study groups. All eight motives for PA showed an upward trend for the experimental group during the study period, while the control group showed a downward trend for all motives during the study period. As for the amount of PA, both groups showed significant differences (p = 0.001). The amount of PA increased in the experimental group during the study period, while it decreased in the control group. Therefore, Brain Breaks videos can be considered as an effective intervention for motivating T2DM patients for PA and improving their amount of PA. View Full-Text
Keywords: Brain Breaks®, video exercise; IPAQ; PALMS; motivation; sport; repeated measure Brain Breaks®, video exercise; IPAQ; PALMS; motivation; sport; repeated measure
►▼ Show Figures 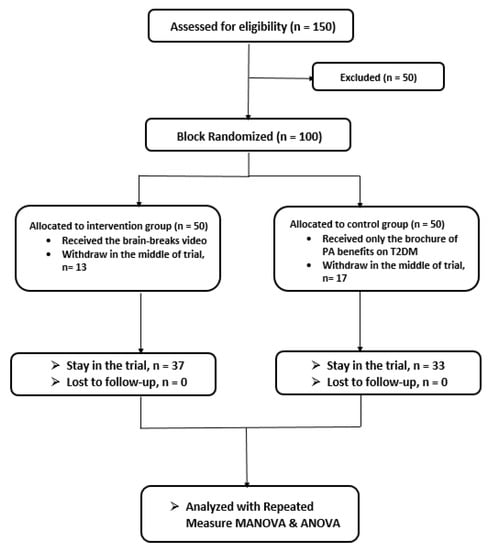