I Am a Nursing Student but Hate Nursing: The East Asian Perspectives between Social Expectation and Social Context
Previous Article in Journal

Is Heart Rate a Confounding Factor for Photoplethysmography Markers? A Systematic Review

A literature search was conducted to investigate the relationship between HR and SI and RI and SDPPG among human subjects. Medline via Ebscohost and Scopus databases were used to identify relevant articles published between 2009 and March 2019. Related articles were identified by using two groups of keywords: (1) heart rate* AND (2) reflection index* OR stiffness index* OR second derivative of finger photoplethysmography* OR finger photoplethysmography*.
The main inclusion criteria for the search results were limited to articles published in the English language with abstracts and full texts that discuss the relationship between HR, SI, RI and SDPPG, using PPG among human subjects. Studies using animal and tissue culture were excluded. In addition, review papers, letters, conference papers, articles in the press, notes, editorials and short surveys were excluded.
For the purpose of this review, only studies that showed a relationship between HR and SI, a relationship between HR and RI or a relationship between HR and SDPPG were selected.
Articles were filtered in three stages before being selected for the review. In the first stage, any article that did not meet the inclusion criteria based on the article title was removed. In the second stage, abstracts of the remaining articles were screened again, and papers that did not meet the selection criteria were discarded. Finally, the remaining articles were read carefully by two independent readers to remove articles that did not meet the selection criteria. All readers had to agree regarding the criteria of selected articles to be reviewed prior to the data extraction stage. Any conflicts of opinions between the reviewers were resolved through rationally mutual discussions. All data searching was done independently using a data search form. The following data were obtained from the articles: main author of the article; publication year of the article; population of subjects in the study; mean age of the subjects; age range among the subjects; percentage of male subjects; instruments used in the study; relationship between heart rate and the parameter; and significant level of the relationship.
The search found eight articles potentially related to the search criteria, of which six articles met the inclusion criteria (Figure 4).

In this study, only RI had a considerable negative association with HR. The association between SI and HR was non-considerable, and the association between HR and SDPPG was inconclusive. Thus, it was suggested that HR may be a confounding factor for RI.
RI describes the magnitude of wave reflection from the lower limbs to the aorta [29]. RI is evaluated by using the formula (PPG-b/PPG-a) × 100% [30]. RI depends on blood volume changes in blood vessels, and blood volume, namely cardiac output/stroke volume, depends on the contraction of the heart. PPG is the method that evaluates changes of blood volume in blood vessels each time a heart beats [49]. From PPG waveform, RI measurement could reveal significant data regarding blood volume changes for high-risk subjects [49].
Contraction of the heart depends on the activity of the sinoatrial (SA) node. The SA node starts electrical impulses to induce contraction. The SA nodes are located in the atrial wall at the junction of the right atrium and the superior cava vein [50]. The blood volume ejected by the heart is correlated with the heart rate. Increasing the heart rate leads to increasing the cardiac output (CO) (CO = HR × SV). The amount of blood pumped out by the heart within 1 min is the cardiac output and stated as liters/minute. The HR, contractility, preload and afterload may influence the CO [48]. Understandably, the product of the stroke volume (SV) and the number of heart beats per minute (HR) is equivalent to CO [51].
Increased heart muscle contractions also promote the increase of blood volume ejected by the left ventricle to the aorta. More blood ejected to the aorta produces more cardiac output. The more blood ejected from the heart to the peripheral, the more reflected waves from lower limbs to the aorta will be decreased due to RI being negatively correlated with HR.
Stiffness index (SI) is recognized as a standard marker for large arterial stiffness [25,29,52,53]. SI value is calculated as height/peak to peak time. SI is an evaluation of the diastolic time relative to the systolic time of PWV in large arteries (body height divided by time between diastolic peak and systolic peak) [54]. Therefore, SI is provisional to the blood flow within the time between two peaks, which are the systolic peak and diastolic peak. The duration is equal to the time between the opening of the aortic valve to the closure of the aortic valve.
After performing exercise or any physical activities, HR will increase. A high HR leads to the reduction of stroke volume. In an acute condition after physical activities, there is no structural characteristic change in blood vessels, but a significant HR increase was recorded. This phenomenon explains that increased oxygen demand causes sympathetic stimulation, which leads to increased HR. So that the time duration of blood flow from the left ventricle via aortic valves to the aorta [55] and then to the peripheral [56] and finally back to the superior and inferior vena cava persists, flows into the right atrium, flows via tricuspid valves and flows into the right ventricle [57] (Figure 5) will not change, although the HR increased. Heart rhythm did not change, but heart rate increased after exercise or physical activities. Because of that, SI is not correlated with HR.
The increased SDPPG-b/SDPPG-a ratio demonstrates an increase in cardiovascular risk or atherosclerosis [34] and an increase in arterial stiffness and age [35]. The SDPPG-b/SDPPG-a ratio represents the blood flow from the opening of the bicuspid valve, flows into the left ventricle and flows via the opening of the aortic valve to the aorta. The blood flow is not influenced by HR. Therefore, the SDPPG-b/SDPPG-a ratio does not correlate with HR.
Takazawa et al. [35] discovered that the increasing SDPPG-d/SDPPG-a ratio characterized a reduction of arterial stiffness, so that the reduction of the SDPPG-d/SDPPG-a ratio represented increasing age and higher arterial stiffness [34,37]. The SDPPG-d/SDPPG-a ratio represented the blood flow in the aorta after the aortic valve opened. Exercise or physical activities may promote the increasing of HR that causes an increase of CO, leading to increased blood flow in the aorta. Vice versa, during resting conditions when HR is at a normal level, the presence of blood flow in the aorta justifies the correlation between the SDPPG-d/SDPPG-a ratio and HR.

In conclusion, HR may be a confounding factor for RI. However, this is based on a limited number of correlation studies, and further interventional studies using pacemakers or drugs should be conducted.

This research was funded by Universiti Kebangsaan Malaysia under the grant GUP-2017-096. 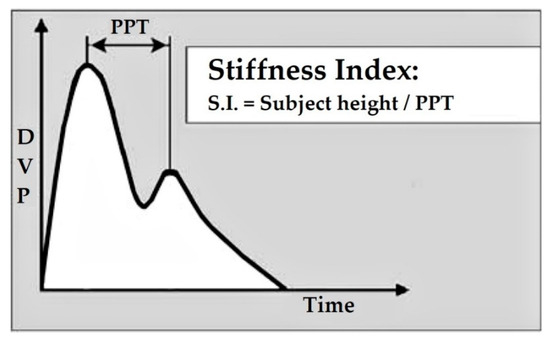 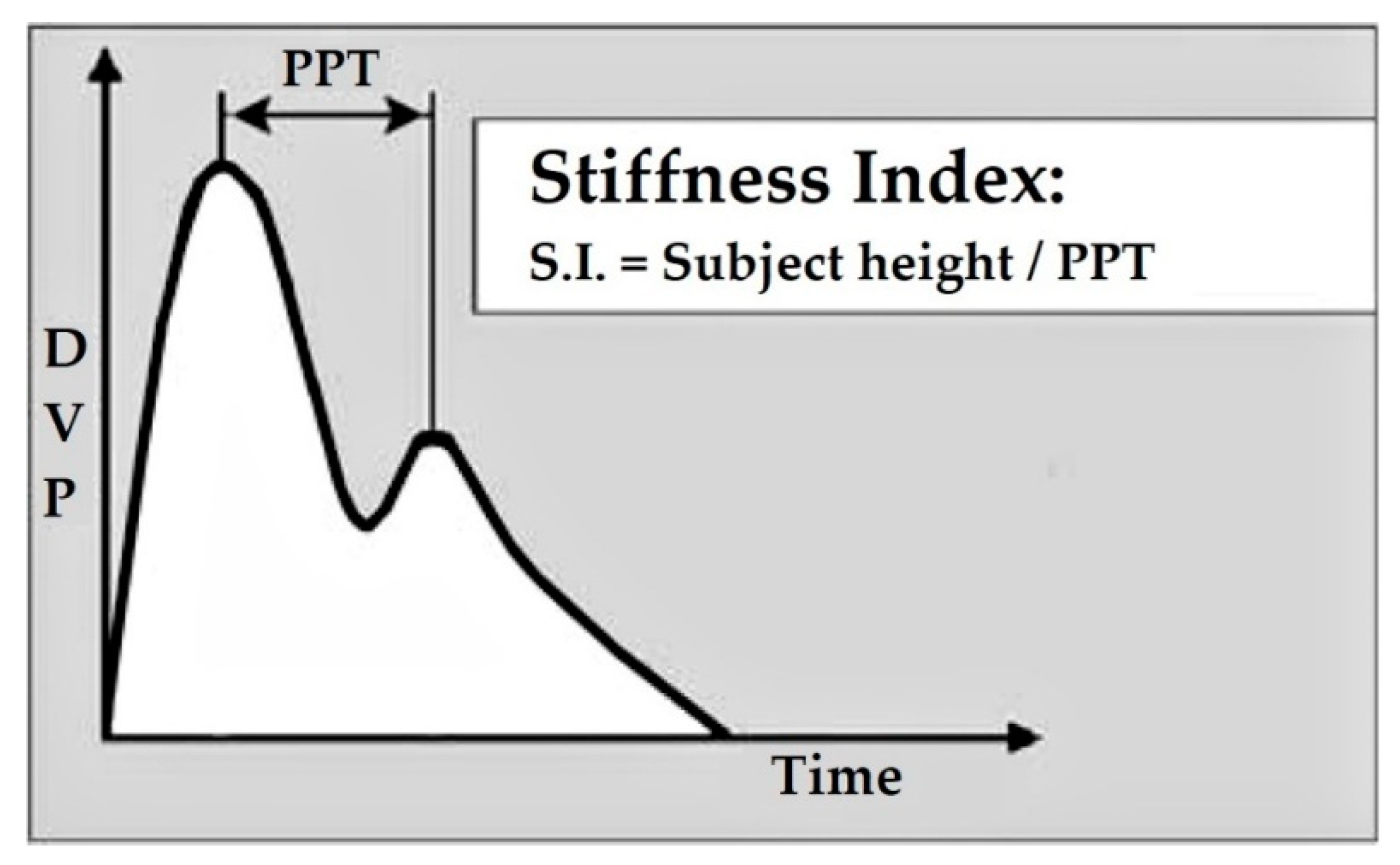 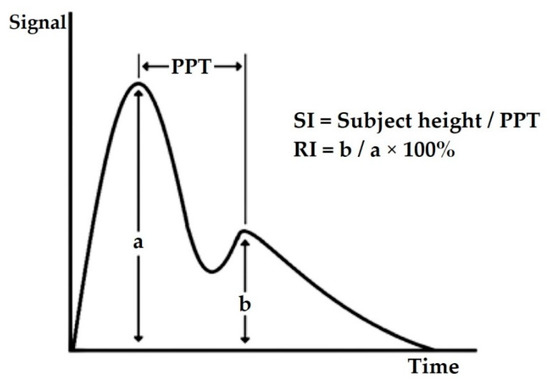 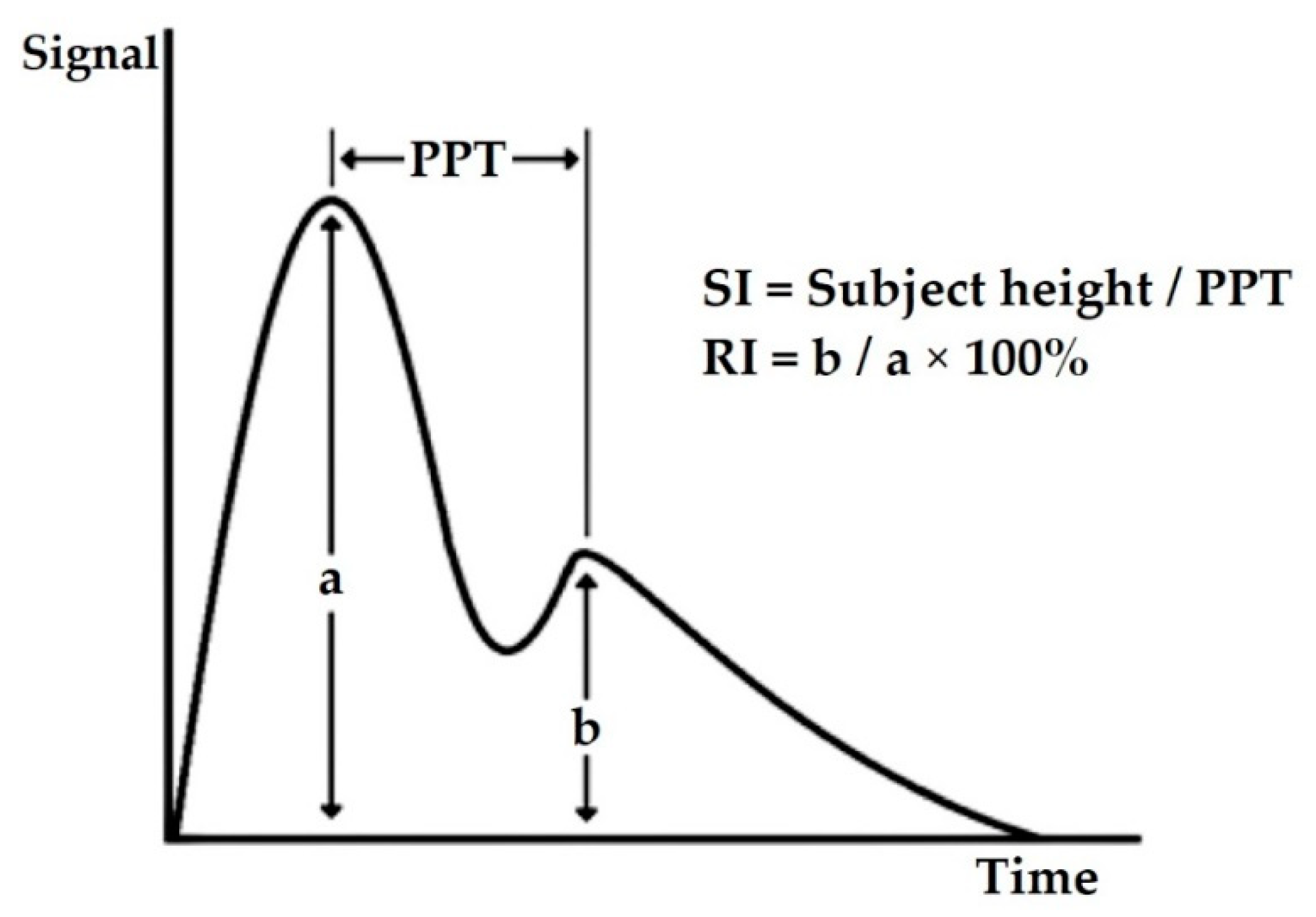 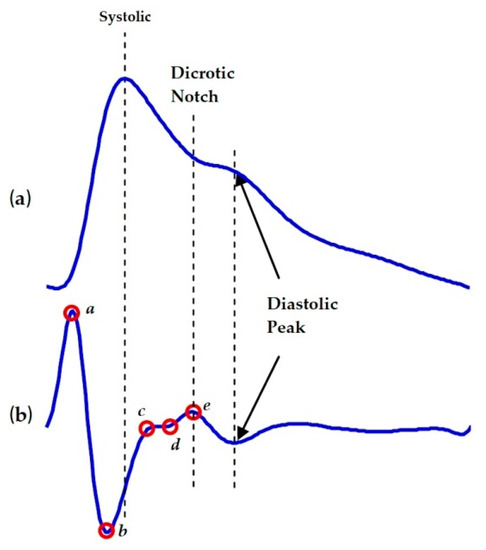 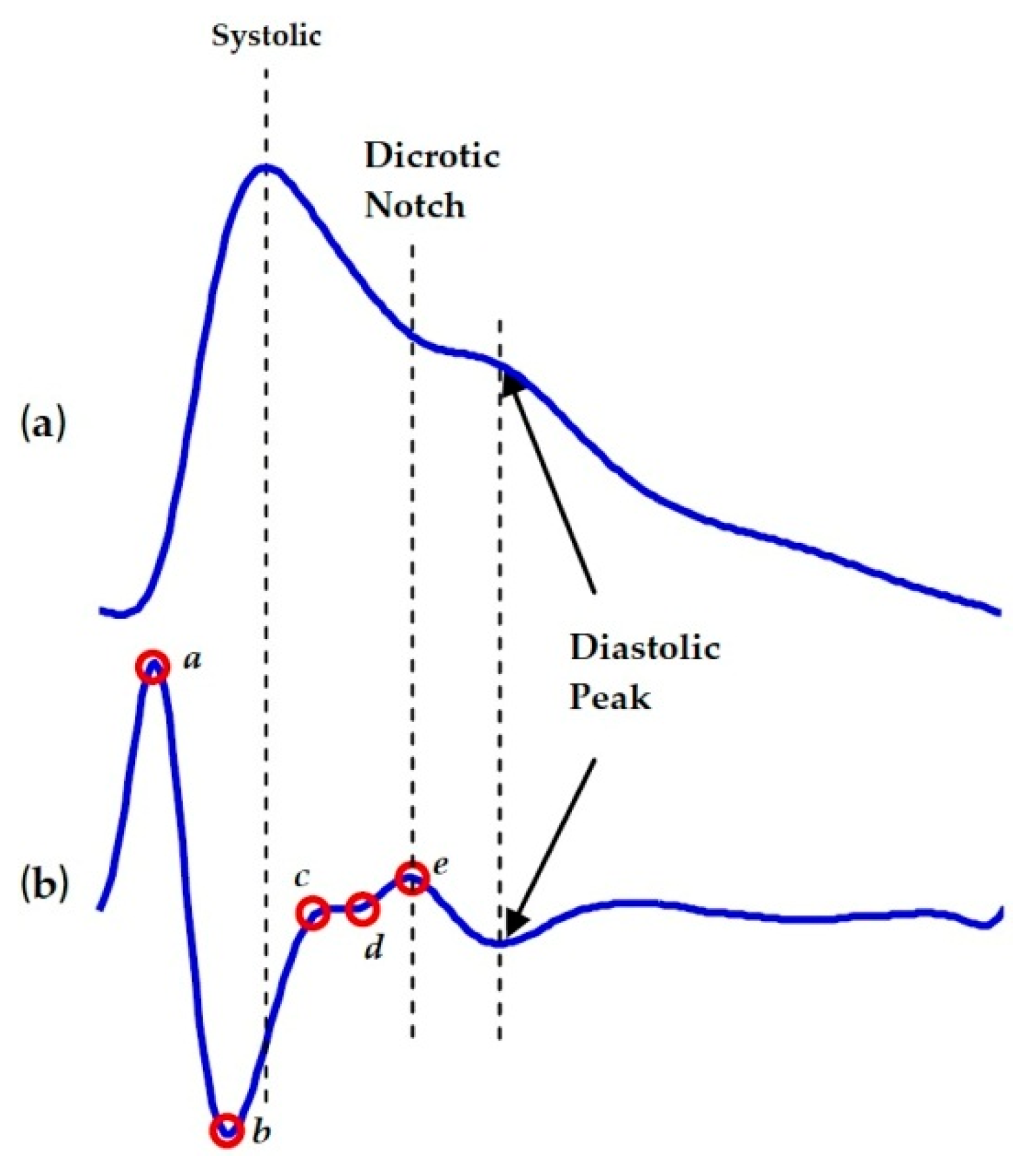 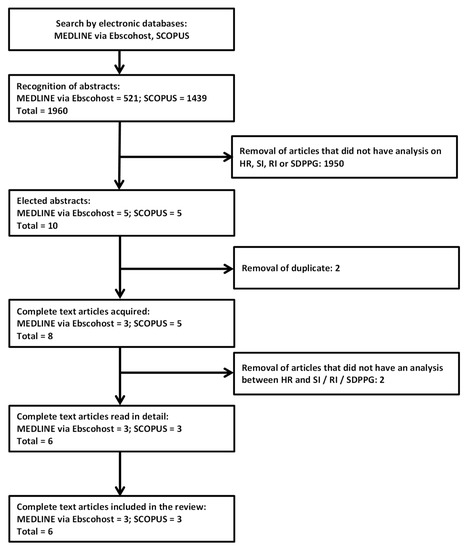 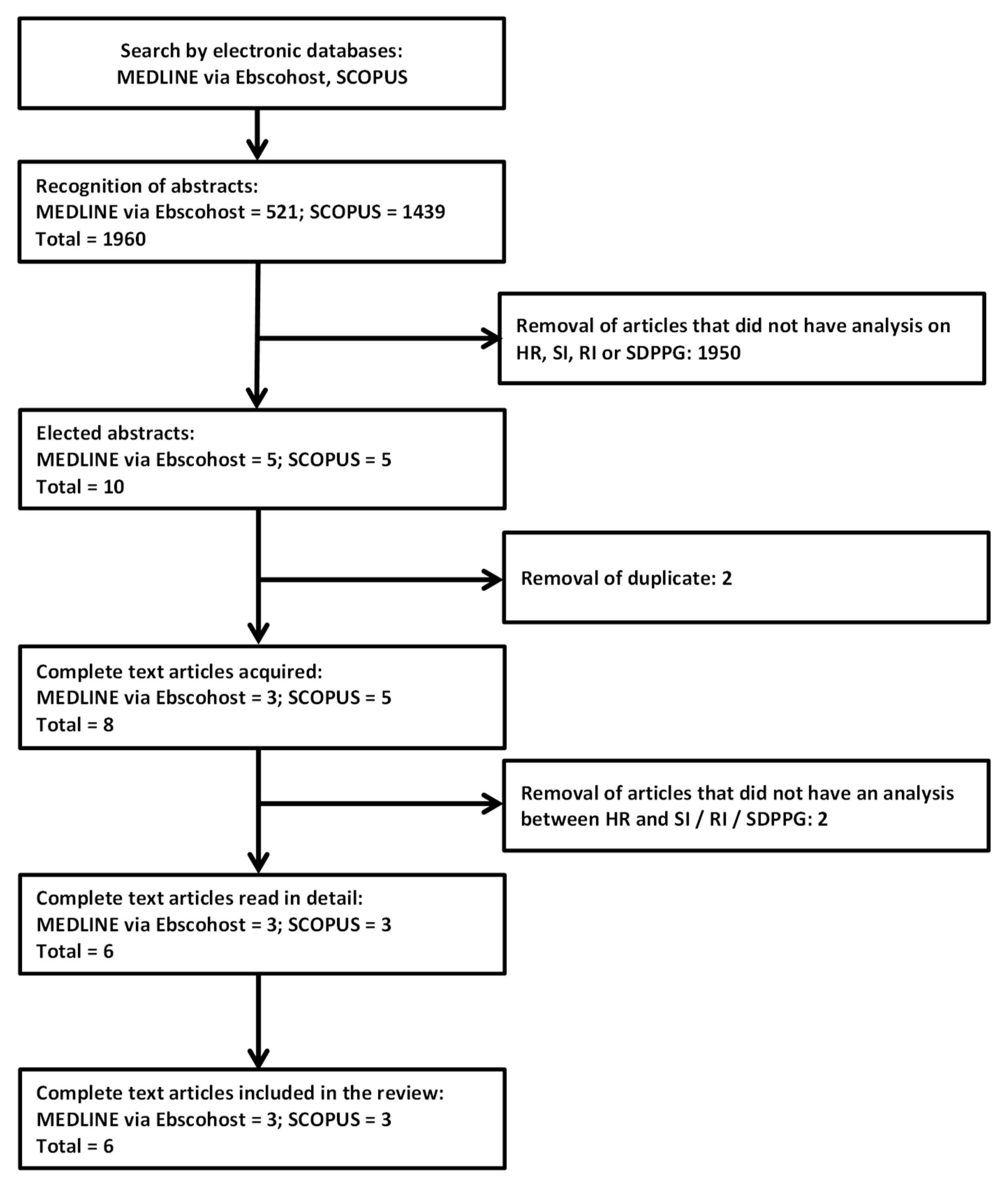 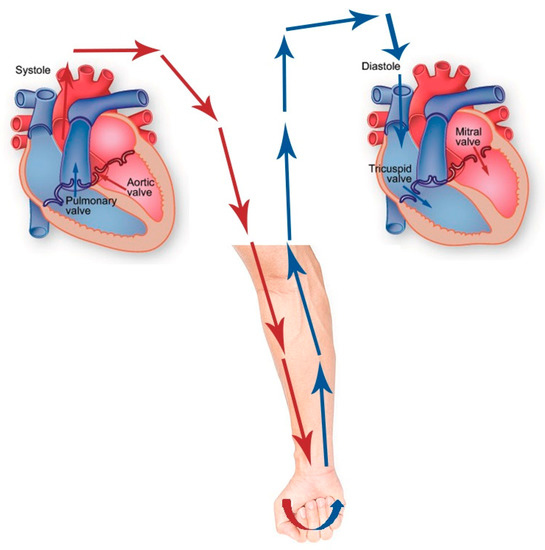 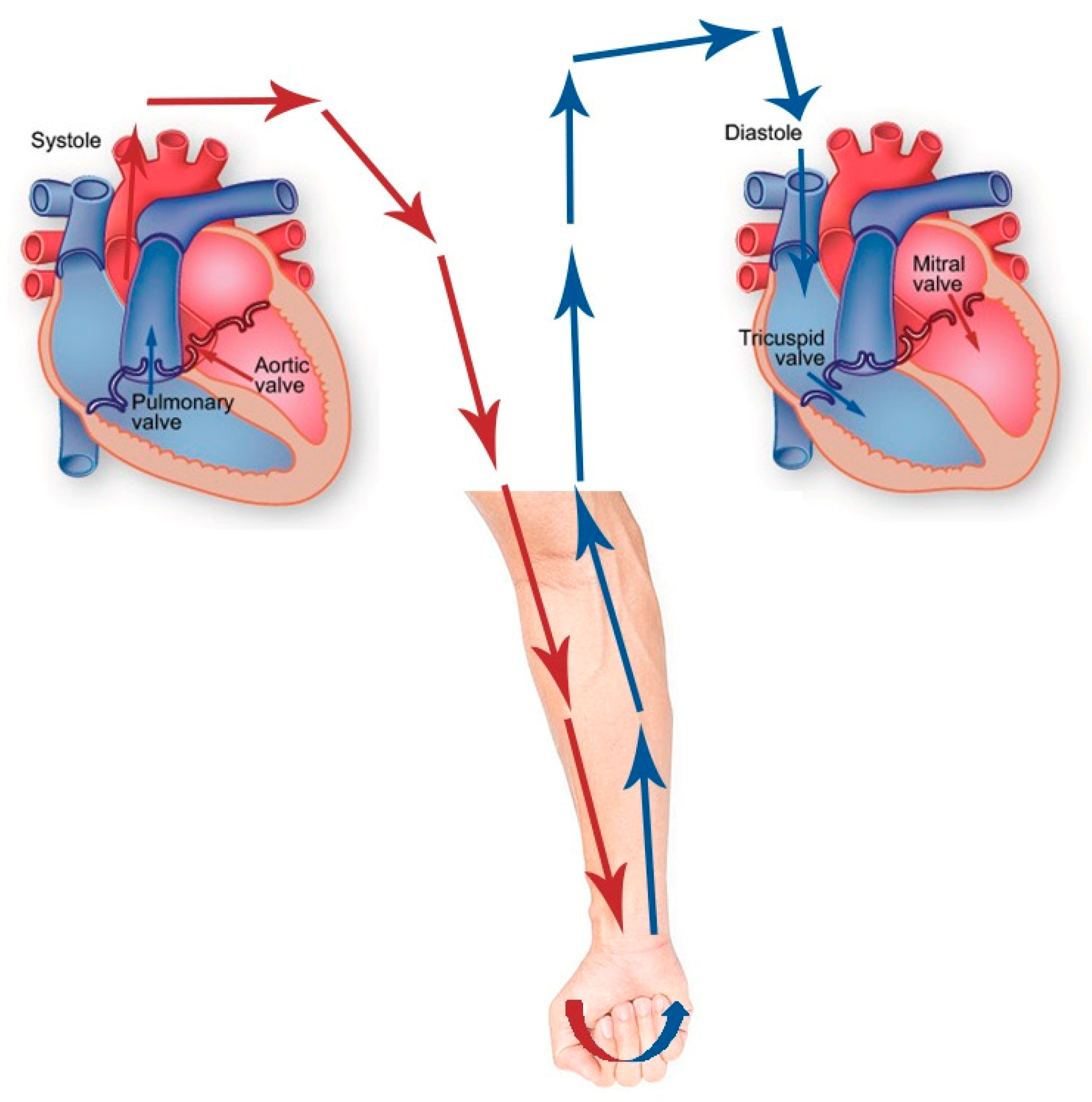