The Prevalence and Context of Alcohol Use, Problem Drinking and Alcohol-Related Harm among Youth Living in the Slums of Kampala, Uganda

We Need to Delay the Age of Onset of Alcohol Consumption

In recent years, new consumption patterns, such as binge drinking, have increased among young people and have not always been recognized as problematic either by health personnel or by society in general, as they are intensive episodes, interspersed with no consumption periods. Although the prevalence of alcohol use disorders in the adult population continues to be higher in men than in women, these gender differences in relation to alcohol consumption are barely observed in adolescents between 14 and 18. Therefore, we are witnessing a change in the pattern of consumption, from regular to episodic, and an attenuation of gender differences. New patterns of alcohol consumption have not only been associated with an increased risk of alcohol use disorders in adult life, but also with neurocognitive involvement in youth. Understanding the risk and resilience factors of alcoholism or problematic drinking patterns will not only allow us to identify the most vulnerable group, but also to guide prevention programs towards protective factors; the skills that contribute to the natural abandonment of the pattern. Knowing the variables involved in the trajectories of abandonment and dependency would contribute to personalizing the interventions and increasing their efficacy and success—a lower relapse rate—, reducing the economic and socio-sanitary costs associated with alcohol dependency, as well as improving the health and well-being, family relations, work and social status of alcohol-dependent people. View Full-Text
Keywords: alcohol consumption; youth; alcohol-attributable fraction alcohol consumption; youth; alcohol-attributable fraction
►▼ Show Figures 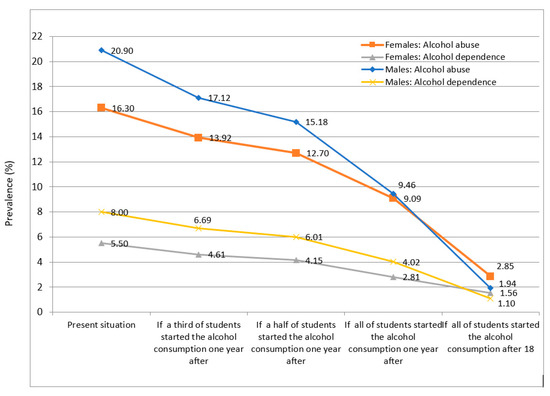