Study Protocol for the Evaluation of the Health Effects of Superblocks in Barcelona: The “Salut Als Carrers” (Health in the Streets) Project
Next Article in Special Issue

A Matter of Degrees: A Systematic Review of the Ergogenic Effect of Pre-Cooling in Highly Trained Athletes

The current systematic review evaluated the effects of different pre-cooling techniques on sports performance in highly-trained athletes under high temperature conditions. PubMed/MEDLINE, EMBASE, Web of Science, CENTRAL, Scopus, and SPORTDiscus databases were searched from inception to December 2019. Studies performing pre-cooling interventions in non-acclimatized highly-trained athletes (>55 mL/kg/min of maximal oxygen consumption) under heat conditions (≥30 °C) were included. The searched reported 26 articles. Pre-cooling techniques can be external (exposure to ice water, cold packs, or cooling clothes), internal (intake of cold water or ice), or mixed. Cooling prior to exercise concluded increases in distance covered (1.5–13.1%), mean power output (0.9–6.9%), time to exhaustion (19–31.9%), work (0.1–8.5%), and mean peak torque (10.4–22.6%), as well as reductions in completion time (0.6–6.5%). Mixed strategies followed by cold water immersion seem to be the most effective techniques, being directly related with the duration of cooling and showing the major effects in prolonged exercise protocols. The present review showed that pre-cooling methods are an effective strategy to increase sports performance in hot environments. This improvement is associated with the body surface exposed and its sensibility, as well as the time of application, obtaining the best results in prolonged physical exercise protocols.
Keywords: cooling; hyperthermia; thermoregulation; athletic performance cooling; hyperthermia; thermoregulation; athletic performance

Nowadays, sport competitions take place in a great diversity of geographical areas characterized by hot environments, such as the 2019 International Association of Athletics Federations (IAAF) World Championships in Doha, the 2020 Olympic Games in Tokyo, and the 2022 Federation International Football Association (FIFA) World Championship in Qatar. This situation constitutes a major challenge for athletic trainers and medical staff due to the impact that heat causes in athletes, mainly in endurance, racket, and team-sport disciplines. The practice of moderate/high-intensity exercise produces large amount of energy, which is eliminated as heat with an associated increase of central temperature [1]. Skin blood flow and sweat rate increments are crucial thermoregulatory mechanisms that favor heat loss [2], although when environmental conditions are extreme, these adjustments are disturbed and cannot avoid the elevation of core body temperature [3]. In this regard, hyperthermia is known to reduce physical and athletic performance [4,5], altering cardiovascular function and leading to both peripheral and central fatigue [6]. Furthermore, exertional heat stroke may occur when core temperature reaches 40 °C and the subject begins to suffer changes in mental status [7]. Nonetheless, highly trained endurance athletes respond physiologically as if they were already heat acclimatized [8], and present less adaptive potential in comparison with moderately trained athletes or untrained subjects [9]. In fact, a study performed in elite cyclists competing in heat showed that they were able to reach core temperatures of 40 °C and above without heat illness [10].
Bearing in mind the particular circumstances in which highly trained athletes compete and in looking for a major performance, sport scientists have put all their effort to find cooling techniques to reduce central temperature and delay the onset of fatigue [11]. Thus, athletes can implement cooling before or during competition to facilitate heat dissipation and increase heat storage capacity, prolonging the time in which exercise intensity can be maintained before reaching a critical top limit [12].
To date, none of the reviews on this topic have focused on highly-trained athletes (>55 mL/kg/min of maximal oxygen consumption (VO2max)) under heat stress conditions (>30 °C) [11,13,14]. This aspect is extremely necessary in preparation for attending to the sports events that will take place in the near future. Therefore, the purpose of this systematic review was to summarize the current scientific evidence in relation to the effectiveness of pre-cooling strategies in highly-trained athletes exercising/competing in high temperature environments.

All studies were identified through a search on electronic databases, including PubMed/MEDLINE, EMBASE, Web of Science, CENTRAL, Scopus, and SPORTDiscus, from inception until December 2019. Reference lists of the included articles were also searched for additional references. Searches were restricted to the English language, without limitations on dates of publication. Details of the search strategy for PubMed/MEDLINE are shown in Appendix A.

Studies were included if they fulfilled the following inclusion criteria: (1) cooling intervention applied before exercise; (2) existence of a control condition (without cooling intervention) through a randomized crossover design; (3) ambient temperature ≥30 °C; (4) highly-trained athletes (>55 mL/kg/min of VO2max or, in case this value was not mentioned, the clear specification by the authors that the athletes were trained); (5) athletes not acclimatized to heat; and (6) measurement of sports performance. Studies were excluded if they were incomplete (e.g., abstracts), if outcome measures were based on non-performance parameters (e.g., physiological markers), and/or if their design was different from randomized crossover trial.

Articles identified by the search strategy were screened independently by two authors for the inclusion criteria using the title and abstract and then the full-text copies. Discrepancies over article inclusion were settled through discussion with a third reviewer until consensus was reached. Data were extracted independently by two investigators, and involved the following items: data on study source, study design, sample size, characteristics of the participants, ambient conditions (temperature and relative humidity), exercise protocol, technique and protocol of pre-cooling, variation in core temperature (Tc) between periods at the end of exercise, and final outcomes of the interventions. The main outcomes were total distance covered, power output, completion time, time to exhaustion, and work.

The quality of the studies was assessed by two researchers using the PEDro scale for this purpose [16]. This scale is based on 11 items, the first of which refers to external validity, and the remaining 10 to internal validity and the presentation of the statistical analysis. The assessment was nevertheless scored out of 10, as the first item was not taken into account for this purpose. For each item whose criterion was met, one point was awarded, whereas no points were given if the item was not fulfilled [17]. The relationship between the score and the quality of the study was on the following basis: excellent quality (9 or 10 points), good quality (6 to 8 points), fair quality (4 or 5 points), and poor quality (fewer than 4 points).

The combination of internal and external strategies was effective in increasing mean power output (3%) and reducing completion time (1.3–5.1%).

Those studies comparing mixed-method cooling vs. internal and/or external strategies did not conclude any significant between-group effects, although there was a trend in favor of mixed methods [31,40,43].

Regarding methodological quality, the risk of bias of the included studies is shown in Table 2. Due to their crossover design, none of the studies could conceal allocations and blind participants from the interventions. Moreover, none of them blinded therapists or assessors. Overall, the quality of the studies attained an average of 4.9 in the PEDro scale, which corresponded to a fair quality.

Sport competitions are currently taking place in non-traditional hot countries, and thus the implementation of cooling techniques before, during, and after competitions will become even more important for athletes to cope with the heat. We have concluded that pre-cooling is effective in improving performance parameters in highly trained athletes. However, no solid evidence exists about the implication of cooling strategies on short and intense efforts, as we have mentioned above. Furthermore, it is also important to find the most suitable pre-cooling technique for each sports practice or specific context, as it may occur that the most effective technique in absolute terms is not the most adequate in certain circumstances. In addition, and parallel to these techniques, the development of technology as wearable biosensors capable of monitoring the thermal state and the response to physical exertion in real time will provide additional advantages to medical staff to protect the health of athletes [69,70].

Pre-cooling methods are an effective strategy to reduce core body temperature prior exercise sessions in heat environments. These methods boost athletic performance, generally increasing power, work, covered distance, and time to exhaustion, as well as reducing completion time. Mixed techniques (a combination of internal and external strategies) seem to be the most adequate option to enhance the benefits of this practice, closely followed by cold water immersion, highlighting the influence of the body surface exposed. Additionally, prolonged physical exercise protocols have evidenced better results from the application of pre-cooling than short bouts.

Appendix A. Search Strategy for Pubmed/MEDLINE 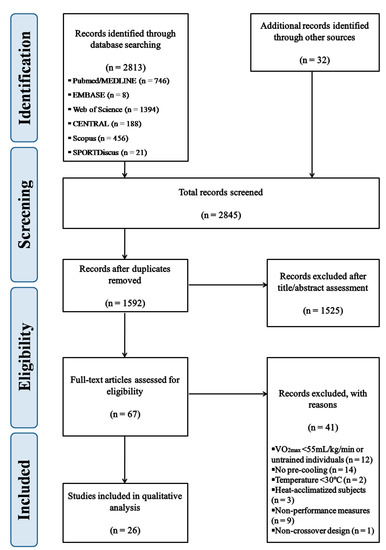 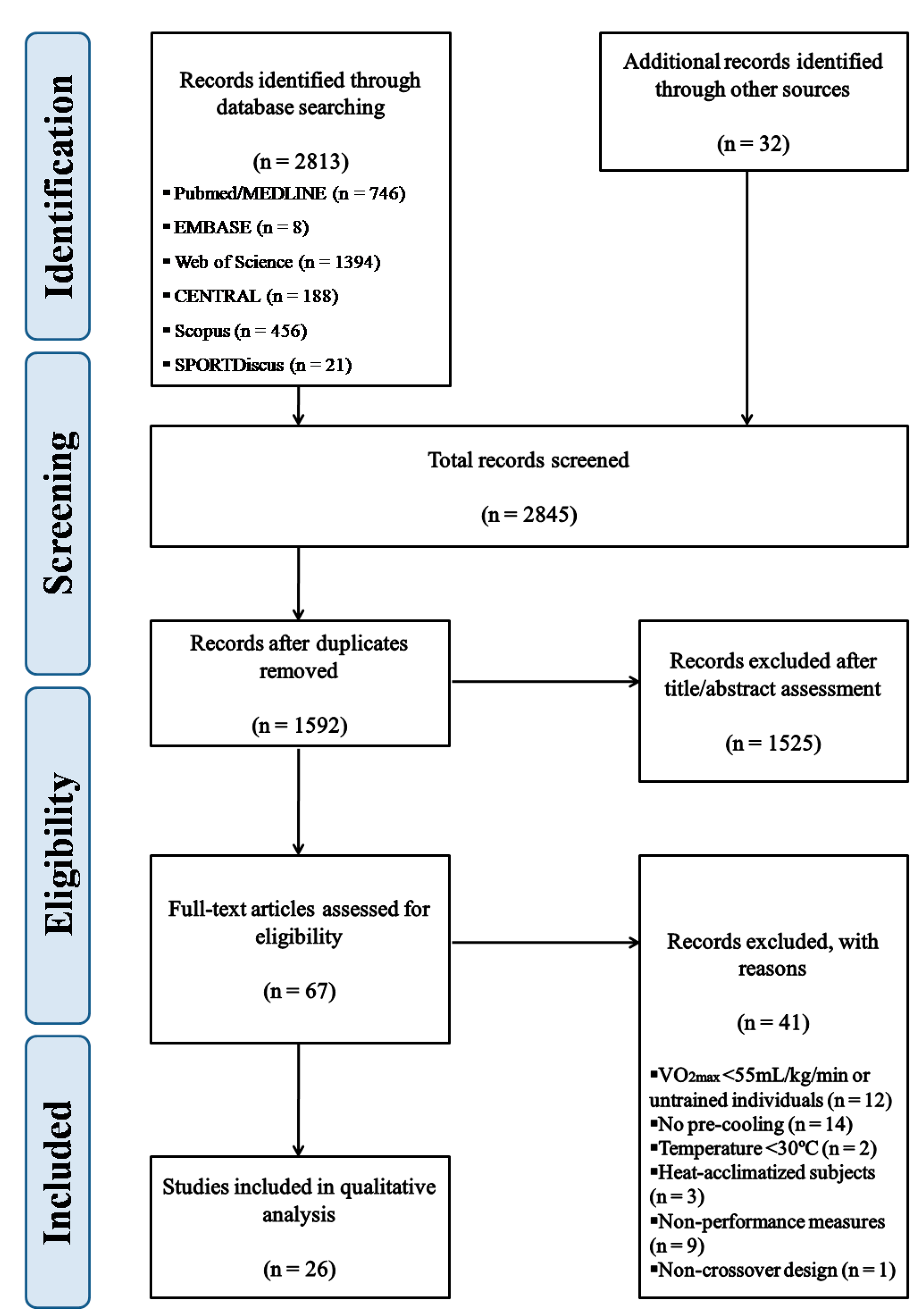 Table 2. Quality assessment of the included studies.
Table 2. Quality assessment of the included studies.
1. Eligibility criteria; 2. Random allocation; 3. Concealed allocation; 4. Baseline comparability; 5. Blind subjects; 6. Blind therapists; 7. Blind assessors; 8. Adequate follow-up; 9. Intention-to-treat analysis; 10. Between-group comparisons; 11. Point estimates and variability. A “●” indicates a “yes” score, and a dash indicates a “no” score.
© 2020 by the authors. Licensee MDPI, Basel, Switzerland. This article is an open access article distributed under the terms and conditions of the Creative Commons Attribution (CC BY) license (http://creativecommons.org/licenses/by/4.0/).
We use cookies on our website to ensure you get the best experience. Read more about our cookies here.
Accept
We have just recently launched a new version of our website. Help us to further improve by taking part in this short 5 minute survey here. here.
Never show this again