Introduction: The use of vitamin K antagonists (VKAs) in non-valvular atrial fibrillation (NVAF) is complicated due to the narrow therapeutic margin they present and their unpredictable dose–response relationship. Most studies are based on warfarin, with the results being extrapolated to acenocoumarol. However, studies comparing the two treatments in terms of the degree of anticoagulation control are scarce, justifying the present study. Main factors associated with poor control of time in therapeutic range (TTR) of anticoagulated patients are also studied. Methods: Cross-sectional study, with real-world data from patients treated in primary care (PC). Data were obtained from the System for the Improvement of Research in PC (SIDIAP) database, covering 60,978 NVAF-anticoagulated patients from 287 PC centres in 2018. Descriptive statistics were derived, and odds ratios were estimated by multivariate logistic regression. Results: 41,430 patients were considered: 93% were being treated with acenocoumarol and 7% with warfarin. There was no difference in poor control of TTR between the two types of VKA treatment, acenocoumarol and warfarin (38.9 vs. 38.4; p = 0.610). Poor anticoagulation control was mainly associated with advanced alcoholism (OR = 1.38), liver failure (OR = 1.37) and intracranial haemorrhage (OR = 1.35) as well as female sex, age < 60 years, cardiovascular history, diabetes mellitus and other variables. Conclusions: There is no association between poor anticoagulation control and the type of VKA treatment administered. Factors associated with poor control of TTR must be considered in clinical practice to improve control and decision-making. View Full-Text
Keywords: atrial fibrillation; vitamin K antagonists; acenocoumarol; warfarin; time in therapeutic range atrial fibrillation; vitamin K antagonists; acenocoumarol; warfarin; time in therapeutic range
►▼ Show Figures 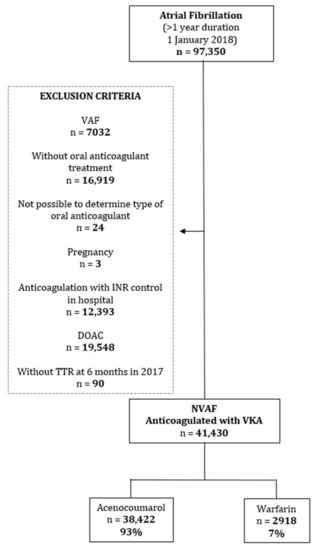