SARS-CoV-2 vs. Hepatitis Virus Infection Risk in the Hemodialysis Population: What Should We Expect?
Previous Article in Journal

Staple crop yield, quality and sustainable production are critical for domestic food security in developing countries. In Tajikistan, both seed-borne diseases and protein quality impair the yield and the quality of the major staple crop, wheat. Here, we used a detailed two-year survey of fields on 21 wheat-producing farms in Tajikistan, combined with lab analyses on seed health and protein quality, to investigate the presence of seed-borne diseases and bread-making quality in Tajik wheat. Seed samples were collected for the analysis of: (i) the presence of common bunt (Tilletia spp.) using the centrifuge wash test, (ii) the major pathogenic fungi on/in the seed using the agar plate test and (iii) the protein amount and size distribution using size-exclusion high-performance liquid chromatography (SE-HPLC). Field occurrence of common bunt and loose smut was generally low (3 farms in year one (14%) showed common bunt occurrence), but the presence of fungi was observed microscopically on most seed samples (on seeds from 19 out of 21 farms = 91%). Tilletia laevis was the dominant agent in common bunt (present in 19 farms compared to T. tritici present in 6 farms). Altogether, 18 different fungi were identified from seed samples by microscopy. Protein composition, measured with high-performance liquid chromatography as protein amount and size distribution (known to correlate with bread-making quality), differed significantly between samples from different farms and years, although the farm type and land elevation of the farm were not the determinants of the protein composition. The presence of certain fungi on the seed correlated significantly with the protein quality and could then have an impact on the bread-making quality of the Tajik wheat. The presence of seed-borne diseases, a low protein content and weak gluten were the characteristics of the majority of the grain samples, mostly irrespective of farm type and farmer’s knowledge. For sustainable development of the Tajik farming systems, and to strengthen the food security of the country, the knowledge of Tajik farmers needs to be increased independently of farm type; in general, plant breeding is required and certified seeds need to be made available throughout the country. View Full-Text
Keywords: common bunt; crop management; environment protection; field survey; food security; seed-borne disease; wheat protein common bunt; crop management; environment protection; field survey; food security; seed-borne disease; wheat protein
►▼ Show Figures 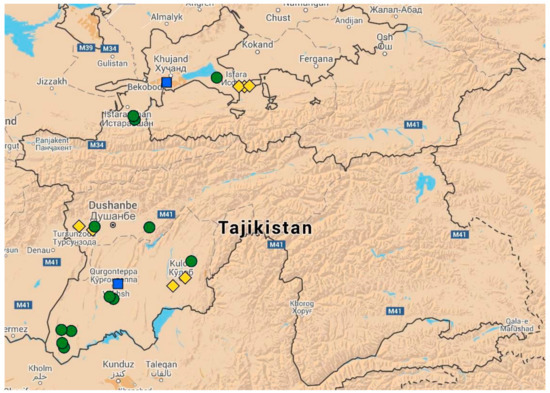 Bahromiddin Husenov
Bahromiddin Husenov is a researcher and wheat breeder at Tajik Agrarian University named after Sh. Shohtemur (TAU). He holds MSc on crop production from TAU and PhD on plant breeding from the Swedish University of Agricultural Sciences (SLU). He used to work for Governmental Institutions, as well as number of local and International NGOs in Tajikistan on wheat breeding and improving the seed sector, as well as plant protection. His research studies aim on improving wheat in Tajikistan through identifying problems and potentials of wheat production, especially grain and seed quality, and by this to contribute for achieving food security in his country and the Central Asian region.

Siham Asaad
Siham Asaad is native of Syria, she holds an MSc and PhD degrees on plant protection and crop production from the University of Aleppo, Syria. Dr Asaad worked at the International Centre for Agriculture Research in the Dry Areas (ICARDA) for a several years in the area of plant-seed pathology, and was the Head of Seed Health Laboratories in Central West Asia and North Africa (CWANA) for more than 11 years. Dr Asaad is a member of the Seed Health Committee at the International Seed Testing Association (ISTA); in addition, she was a member of many other national, regional and international scientific association committees. Her research focused on activities related to screening crops for resistance to diseases, disease surveys, epidemiology, plant protection, improving pathogen detection and control methodologies, in addition to crop production and agronomy practices. Dr Asaad supervised more than 15 PhD and MSc students and addressed international plant-seed-health lectures for training courses and scientific events.

Hafiz Muminjanov
Hafiz Muminjanov is native of Tajikistan and has a background on plant breeding, biotechnology, seed technology, plant protection and crop management. He holds Doctor of Agricultural Science on plant breeding and seed technology (Moscow, 2000) and is Professor of plant physiology and biotechnology (Moscow, 2004). He has more than 30 years’ experience in training young professionals and implementing development projects. Currently he works as an Agricultural Officer at Food and Agriculture Organization of the United Nations, Rome, Italy. He is a co-author for more than 12 wheat varieties released in Tajikistan. He supervised more than 15 PhD and MSc students.

Larisa Garkava-Gustavsson
Larisa Garkava-Gustavsson is native of Ukraine and has got her MSc degree in genetics from Kiev State University, Kiev, Ukraine. Her PhD degree is from The Swedish University of Agricultural Sciences where she holds now a docentship, as well as a position of a researcher at the Department of Plant Breeding. She has coordinated Sida program ‘Support to Higher Education in Tajikistan’ and has an experience of collaborating with CGIAR institutes. She performs research on genetic resources enhancement and disease resistance in a range of horticultural and agricultural crops.

Eva Johansson
Eva Johansson is native of Sweden and has a background in wheat genetics, breeding and quality. She holds a full professorship at the Department of Plant Breeding, The Swedish University of Agricultural Sciences, where she is leading a research group of 35 persons. Professor Johansson is also coordinating SLU Grogrund – Center for breeding of food crops and the strategic research area TC4F (Trees and Crops for the Future). She has long experience in collaborating with CGIAR institutes and is involved in programs related to plant breeding in developing countries, educating PhD-students in Africa, Asia and South America and teaching in MSc programs. She has also evaluated the Sida program in Uganda over a period of seven years. She has published more than 110 peer-review papers in international journals. She received her PhD from the Swedish University of Agricultural Sciences in Sweden.
Zoom | Orient | As Lines | As Sticks | As Cartoon | As Surface | Previous Scene | Next Scene
We use cookies on our website to ensure you get the best experience. Read more about our cookies here.
Accept
We have just recently launched a new version of our website. Help us to further improve by taking part in this short 5 minute survey here. here.
Never show this again