Prevalence of Depression during Pregnancy in Spanish Women: Trajectory and Risk Factors in Each Trimester

Changes in Visual Performance under the Effects of Moderate–High Alcohol Consumption: The Influence of Biological Sex

The purpose of this study was to analyze the changes in visual functions under the effects of moderate–high breath alcohol concentrations (BrACs), and the influence of biological sex on visual deterioration, considering different factors. A total of 37 healthy habitual alcohol users were enrolled in the experiment. The participants underwent a baseline session and a second session after an intake of 450 mL of red wine, so that all of them reached a BrAC above 0.25 mg/L. Visual performance was assessed by measuring the contrast sensitivity function, the halo perception, the stereopsis, and finally the retinal image quality. A Visual Deterioration Score (VDS) was calculated using the deterioration of these visual variables. All visual functions analyzed were significantly impaired following alcohol consumption (p < 0.05). The VDS was associated with the BrAC (ρ = −0.476). The VDS was also significantly higher in females, with the BrAC having a significant effect on the variability of the VDS in males and females (p < 0.05). However, the body mass index showed no significant effect (p > 0.05). Visual functions were significantly impaired under the influence of alcohol, and this deterioration was greater in females. The deterioration depends on the BrAC reached, being the primary thing responsible for the differences observed between males and females. View Full-Text
Keywords: alcohol consumption; visual deterioration; biological sex; retinal image quality; visual discrimination capacity; stereopsis alcohol consumption; visual deterioration; biological sex; retinal image quality; visual discrimination capacity; stereopsis
►▼ Show Figures 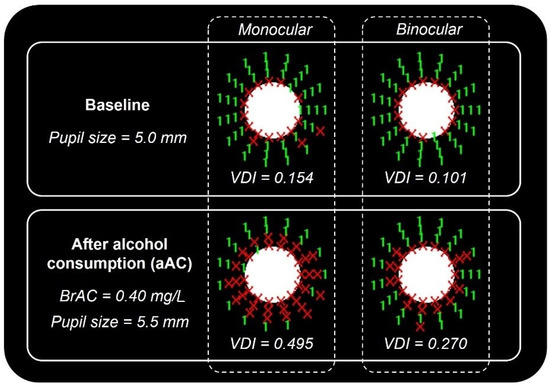