What Affects Quality of Life for People with Type 1 Diabetes?: A Cross-Sectional Observational Study
Previous Article in Special Issue

Characteristics and Trends of the Hospital Standardized Readmission Ratios for Pneumonia: A Retrospective Observational Study Using Japanese Administrative Claims Data from 2010 to 2018

Previous studies indicated that optimal care for pneumonia during hospitalization might reduce the risk of in-hospital mortality and subsequent readmission. This study was a retrospective observational study using Japanese administrative claims data from April 2010 to March 2019. We analyzed data from 167,120 inpatients with pneumonia ≥15 years old in the benchmarking project managed by All Japan Hospital Association. Hospital-level risk-adjusted ratios of 30-day readmission for pneumonia were calculated using multivariable logistic regression analyses. The Spearman’s correlation coefficient was used to assess the correlation in each consecutive period. In the analysis using complete 9-year data including 54,756 inpatients, the hospital standardized readmission ratios (HSRRs) showed wide variation among hospitals and improvement trend (r = −0.18, p = 0.03). In the analyses of trends in each consecutive period, the HSRRS were positively correlated between ‘2010–2012’ and ‘2013–2015’ (r = 0.255, p = 0.010), and ‘2013–2015’ and ‘2016–2018’ (r = 0.603, p < 0.001). This study denoted the HSRRs for pneumonia could be calculated using Japanese administrative claims data. The HSRRs significantly varied among hospitals with comparable case-mix, and could relatively evaluate the quality of preventing readmission including long-term trends. The HSRRs can be used as yet another measure to help improve quality of care over time if other indicators are examined in parallel. View Full-Text
Keywords: administrative claims data; Japan; pneumonia; patient readmission; quality indicator administrative claims data; Japan; pneumonia; patient readmission; quality indicator
►▼ Show Figures 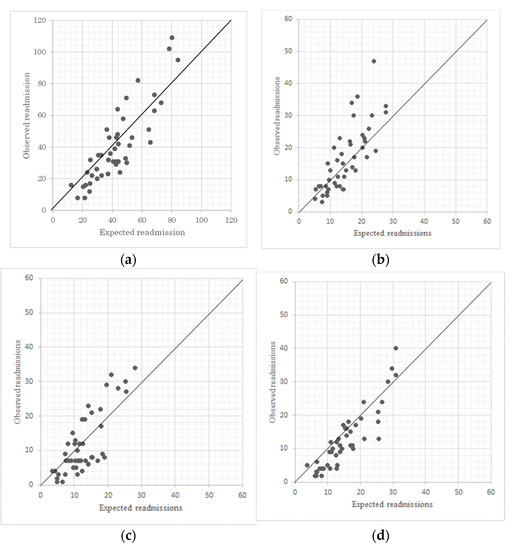