Relationship between Green and Blue Spaces with Mental and Physical Health: A Systematic Review of Longitudinal Observational Studies
Previous Article in Journal

Effectiveness of a Three-Week Inpatient Pulmonary Rehabilitation Program for Patients after COVID-19: A Prospective Observational Study

Socio-Economic Status May Associate Different Risk(s) with Early Childhood Caries (ECC) That Can Cause the Development of Psychomotor Deficiency in Preschool Children Aged 3–6 Years Old: The Results of Preliminary Analysis from a Cohort Study

Background: We have recently shown that there is a positive correlation between severe caries and developing psychomotor deficiency in preschool children. To fully re-assess such a relationship, we embarked on a 3-year longitudinal follow-up study of kindergarteners, where we aimed to: (i) confirm whether early childhood caries is causally related to the development of psychomotor deficiency as proposed, and (ii) address any significant role or contribution of socio-economic status associated with caries–psychomotor interactions in the preschooler family cohorts studied, over time. Methods: A longitudinal study was designed where the total sum of 159 kindergarteners aged 3–6 from the central and southern regions of Taiwan were randomly selected and recruited for clinical examination of caries, together with questionnaires for personal, demographic and dietary information, socio-economic status, and the children’s psychomotor development scales which were collected and analyzed over time. Student’s t test, chi-squared test, correlation coefficients, and multiple linear regression analysis with R2 determinants were employed to assess any attributable differences (of 0~1) between SES vs. psychomotor manifests and caries measured among all variables computed. Results: The results of our preliminary analyses show that: (i) there was likely a causal relationship between caries activities and aspects of general development scale via the Chinese Child Development Inventory over time (4.01 ± 3.47 vs. 5.88 ± 2.58, respectively) in the 3–6-year-old preschoolers, and (ii) there was significantly more attributable influence (via higher R-squared values) from SES and psychomotor manifests than that of caries and the Chinese Child Development Inventory counterparts, as detected over time. Conclusion: Collectively, the resulting analyses support our previous findings and confirm that there is likely a causal relationship between severe caries and psychomotor deficiency in growing preschoolers; the resulting analyses revealed that such causally related interactions may be attributably explainable by a content-reliant association via socio-economic status analyzed in the kindergartener family cohorts studied. Thus, the socio-economic status or its constituents/factors will have a much broader influence not only associated with developing early childhood caries (a biologic trait), but also for psychomotor deficiency (a social trait) in vulnerable children at risk. View Full-Text
Keywords: socio-economic status (SES); early childhood caries (ECC) and dmft; psychomotor; development and CCDI; preschool kindergartners; longitudinal cohort socio-economic status (SES); early childhood caries (ECC) and dmft; psychomotor; development and CCDI; preschool kindergartners; longitudinal cohort
►▼ Show Figures 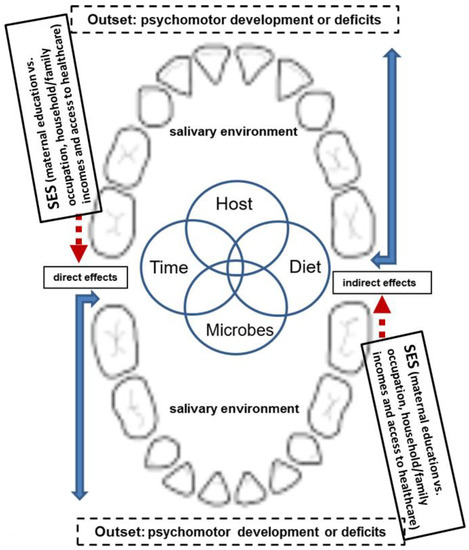 
Teng, Andy Y.-T., Chen-Yi Liang, and Yen C.G. Liu 2021. "Socio-Economic Status May Associate Different Risk(s) with Early Childhood Caries (ECC) That Can Cause the Development of Psychomotor Deficiency in Preschool Children Aged 3–6 Years Old: The Results of Preliminary Analysis from a Cohort Study" International Journal of Environmental Research and Public Health 18, no. 17: 9011. https://0-doi-org.brum.beds.ac.uk/10.3390/ijerph18179011