Cerebellar Degeneration in Epilepsy: A Systematic Review
Next Article in Special Issue

Although asymmetries in lower limbs have been linked with players’ performance in male soccer players, literature that has been published addressing female soccer is scarce. Thus, the aim of this study was twofold: (i) describe the asymmetries of women soccer players during jumping, change-of-direction and range-of-motion tests; and (ii) test possible relationships between asymmetries and injury risk in female soccer players. Sixteen female players (15.5 ± 1.5 years) performed a battery of fitness tests (i.e., jump ability, change-of-direction ability and passive range-of-motion) and muscle mass analysis via dual-energy X-ray absorptiometry, through which the specific asymmetry index and the related injury risk were calculated. Significant (p < 0.05) lower asymmetries in the change-of-direction test were observed in comparison to those observed in jumping and range-of-motion tests; significant (p < 0.05) lower asymmetries in muscle mass were also reported compared to those found in the change-of-direction and countermovement jump tests. Additionally, increased injury risk for countermovement jump and hip flexion with extended knee range-of-motion (relating to asymmetry values) and for ankle flexion with flexed knee range-of-motion in both legs (relating to reference range-of-motion values), as well as increased individual injury risk values, were observed across all tests. These findings suggest the necessity to implement individual approaches for asymmetry and injury risk analyses. View Full-Text
Keywords: fitness testing; interlimb differences; risk factor; football fitness testing; interlimb differences; risk factor; football
►▼ Show Figures 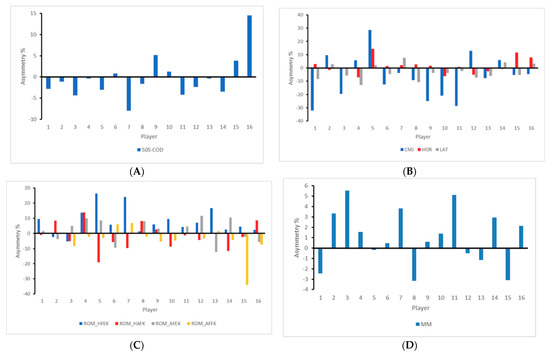