Treatment of Stage 2 Medication-Induced Osteonecrosis of the Jaw: A Case Series
Next Article in Special Issue

Are You Prepared to Save a Life? Nursing Students’ Experience in Advanced Life Support Practice
Previous Article in Journal

How Does the Pandemic Facilitate Mobile Payment? An Investigation on Users’ Perspective under the COVID-19 Pandemic
Previous Article in Special Issue

Effectiveness of Complementary Therapies in Cancer Patients: A Systematic Review

According to the World Health Organization, cancer is the second leading cause of death in the world. In Spain, about a quarter of a million cases were diagnosed in 2017, and 81% of the Spanish population has used, at least once, some kind of complementary therapy. Said therapies are increasingly being used by cancer patients. The purpose of the study is to analyse the effectiveness of complementary therapies among cancer patients. A systematic peer review was conducted following the PRISMA-ScR guide in four databases (PubMed, CINAHL, Scopus and WOS). The inclusion criteria were Randomised Clinical Trials, published between 2013 and 2018, with a value of 3 or more on the Jadad Scale. The protocol was registered in PROSPERO (CRD42019127593). The study sample amounted to 1845 patients (64.55% women), the most common being breast cancer patients (794), followed by lung cancer patients (341). Fifteen complementary therapies were identified. We found two studies for each of the following: electroacupuncture, phytotherapy, hypnotherapy, guided imagery and progressive muscle relaxation. From the remaining ones, we identified a study on each therapy. The findings reveal some effective complementary therapies: auriculotherapy and acupuncture, laser moxibustion, hypnosis, Ayurveda, electroacupuncture, progressive muscle relaxation and guided imagery, yoga, phytotherapy, music therapy and traditional Chinese medicine. On the other hand, electroacupuncture, laser moxibustion and traditional Chinese medicine presented adverse effects, and kinesiology did not show effectiveness. View Full-Text
Keywords: complementary therapies; effectiveness; neoplasms; Randomised Controlled Trial; systematic review; treatment outcome complementary therapies; effectiveness; neoplasms; Randomised Controlled Trial; systematic review; treatment outcome
►▼ Show Figures 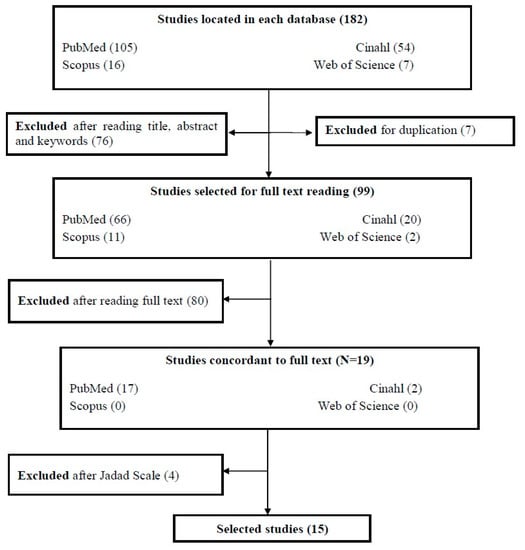