Financing Healthcare in Central and Eastern European Countries: How Far Are We from Universal Health Coverage?

Primary cell cultures from wild organisms have been gaining relevance in ecotoxicology as they are considered more sensitive than immortalized cell lines and retain the biochemical pathways found in vivo. In this study, the efficacy of two methods for primary hepatocyte cell isolation was compared using liver from two marine fish (Sparus aurata and Psetta maxima): (i) two-step collagenase perfusion and (ii) pancreatin digestion with modifications. Cell cultures were incubated in L-15 medium at 17 ± 1 °C and monitored for up to six days for cell viability and function using the trypan blue exclusion test, MTT test, lactate dehydrogenase (LDH) activity, and ethoxyresorufin O-deethylase (EROD) activity after Benzo[a]Pyrene exposure. The results showed significant differences between the number of viable cells (p < 0.05), the highest number being obtained for the pancreatin digestion method (average = 4.5 ± 1.9 × 107 cells). Moreover, the hepatocytes showed solid adherence to the culture plate and the rounded shape, changing into a triangular/polygonal shape. The cell viability and function obtained by pancreatin digestion were maintained for five days, and the EROD induction after exposure to the B[a]P showed that cells were metabolically active. This study shows that the optimized pancreatin digestion method is a valid, cost-effective, and simple alternative to the standard perfusion method for the isolation of primary hepatocytes from fish and is suitable for ecotoxicological studies involving marine pollutants, such as PAHs. View Full-Text
Keywords: primary hepatocytes; in vitro assays; Sparus aurata primary hepatocytes; in vitro assays; Sparus aurata
►▼ Show Figures 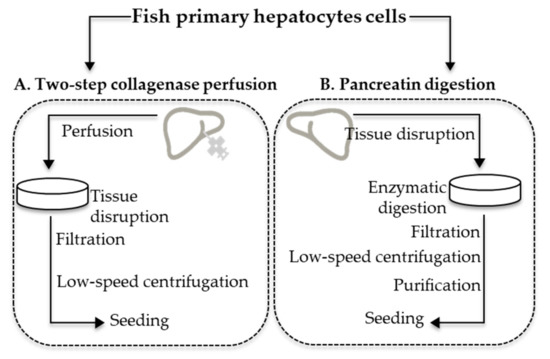