Climate change scenarios show that water availability could be decreasing in the near future, adding to the increasing problem of the growing water demands in socioeconomic sectors. The aim of this work was to generate a geographically explicit water balance concerning availability vs. demand in an overpopulated region of Mexico. Water balance and water deficit models were made for three periods of time: 1970–2000, and two future periods of time (2041–2060 and 2061–2080). Three global climate models were used in addition to two different climate scenarios from each (Representative Concentration Pathways (RCP) RCP 4.6 and RCP 8.5). Water demand for socioeconomic sectors was calculated through the water footprint. Water availability was 197,644.58 hm3/year, while that the water demand was 59,187 hm3/year. The socioeconomic sectors with the highest demand were domestic services (48%), agriculture (27%), livestock agriculture (20%), and timber production (5%). The highest water availability areas were not the same as those with the highest demand and vice versa. However, 39% of municipalities had a higher water demand than its availability. A significant reduction in water availability was identified, considering an interval of −15% to 40%. This variation depends on climate models, scenarios, and period of time. Areas with overpopulated cities in the region would have higher pressure on water availability. These results could be used in the implementation of public policies by focusing on adaptation strategies to reduce water deficit in the immediate future. View Full-Text
Keywords: climate change; mapping water availability; Sierra Madre Oriental; WaterWorld software climate change; mapping water availability; Sierra Madre Oriental; WaterWorld software
►▼ Show Figures 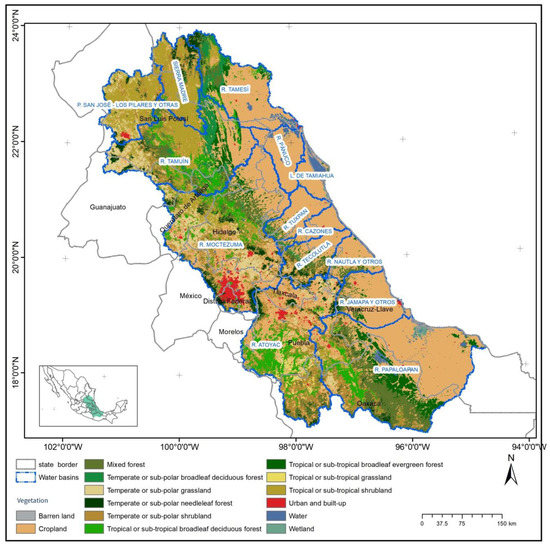