Investigation of Concentration and Distribution of Elements in Three Environmental Compartments in the Region of Mitrovica, Kosovo: Soil, Honey and Bee Pollen
Next Article in Special Issue

There are several types of measurement tools used in orthopedics, including subjective (tests and scores) and objective (laboratory tests) parameters. Patient-reported outcome measures (PROMs) are commonly used in orthopedic studies to assess patient symptoms and health after surgical treatment [1]. PROMs are self-reported measures, designed with the aim of collecting information related to constructs that are reported by the patients themselves, without third party interpretations. PROMs include perception of pain, functionality, prosthesis awareness, satisfaction and health-related quality of life [2,3]. PROMs can be generic, including health-related information, or specific, reporting data on specific diagnosis or procedures (joint replacement, surgery or a specific diagnosis) [4].
The Forgotten Joint Score (FJS-12), the Western Ontario and McMaster Universities Osteoarthritis Index (WOMAC) and the Oxford Hip Score (OHS) are examples of PROMs [5]. The FJS-12 is a patient-reported outcome scale created to evaluate prosthesis awareness during daily activities [6]. Developed by Behrend et al. in 2012, it assesses the prosthetic joint’s degree of awareness, with a low ceiling effect [6].
Total hip arthroplasty (THA) has revolutionized the treatment of hip arthritis. This surgery is related to a high number of risk factors and complications. Bone cement implantation syndrome [7], hip fractures [8] and residual lateral hip pain [9] could affect patients during and after THA surgery. The complications could influence the outcomes [10], the quality of life and the functionality of the joint [8]. The number of THAs performed worldwide increases every year [11,12]. Therefore, finding valid solutions to assess the patient’s outcomes after surgery is mandatory. The efficacy of a surgical procedure is usually evaluated by the mean difference between pre- and post-operative scores. Although this difference could measure a change in outcomes after THA, it does not reflect the effect size [13]. A significant mean change (expressed by significant p-value), could not be transposed into a considerable change for the patient [14]. Moreover, the clinical significance for individual patients may vary widely; therefore, it is necessary to find and evaluate new scores that are as realistic as possible. Remarkable changes in scores can be defined by the minimum clinically important difference (MCID) [15]. The term MCID is always interchangeably used with minimum important change (MIC) [16], causing ambiguity [14]. The MCID can be defined as the smallest change or difference (assessed by PROMs) that is evaluated as beneficial and could change the patient’s clinical management, assuming a lack of significant side effects and costs [17]. The difference in the mean change of FJS-12 between patients without improvements compared to patients with “small” improvements after a THA could be defined as MCID. Another significant value in the literature is the patient acceptable symptom state (PASS). It is considered as the minimum PROMs cut-off value that corresponds to a patient’s satisfactory state [18]. The PASS is the threshold for PROMs most closely associated with patient satisfaction, and is assessed on a separate questionnaire (the anchor) [14]. Despite the validity and reliability of the FJS-12 being already demonstrated [19], the MCID and the PASS of this score have not previously been assessed.
This study aimed to define the MCID and PASS for the FJS-12 after THA. Distribution-based approaches and anchor approaches, using WOMAC and OHS as anchors, were used.

This is a quality improvement study. Patients undergoing THA from January 2019 to October 2019 were assessed pre-operatively and six months post-surgery using the FJS-12, the WOMAC and the OHS. The inclusion criteria were severe hip osteoarthritis (Grade III-IV of Kellgren-Lawrence Classification) [20], high and persistent pain, hip replacement surgery and at least 6 months follow-up after surgery. All the patients underwent total hip arthroplasty (anterior and posterior approaches) and were treated by the same surgical equipment. No revisions were performed during the follow-up period.
The exclusion criteria were revision surgery, Grade I-II of Kellgren-Lawrence Classification, simultaneous bilateral hip replacement, hip resurfacing and patients with cognitive impairment. Cognitive impairment could affect the post-operative results, as patients with dementia reported a higher risk of falls and fractures, influencing the outcomes reporting [21].

An a priori power analysis was performed. With an alpha level of 0.05 (two-tailed), minimum power established at 0.80, and a medium effect size of 0.6 (ES, Cohen’s d) [25], 24 participants would be necessary to find a statistically significant effect on the model. Data normality for the FJS-12 was assessed using the Kolmogorov-Smirnov test of normality. The baseline and 6 months post-operative scores were compared using the paired sample t-test. The statistical level of significance was set to 0.05. Both distribution-based and anchor approaches were used to estimate MCIDs for the normalized FJS-12 from baseline to 6 months post-operative follow-up.

High values of WOMAC and OHS scores at 6 months follow-up were used as the anchor. The cut-off value for WOMAC was 90 points, obtained from the estimate of the score at 6 months post-operative in the literature [26]; while 40 was set as the cut-off for OHS since the score from 40 to 48 indicate satisfactory joint function [27]. Therefore, patients with WOMAC values greater than 90 and OHS values greater than 40 at 6 months post-operative were considered responders. An external anchor was defined as valid if the correlation coefficient with FJS-12 was at least 0.3 with p < 0.05.
Two anchor methods were used: receiver operating characteristic (ROC) curves and the mean change (MC). The ROC curves were used to identify the change in FJS-12 with maximized sensitivity and specificity. To find the cut-off, the Youden Index was used. The MC in FJS-12 is the mean difference in patients who reported high values of WOMAC and OHS scores.
The same anchors were used for estimated PASS. WOMAC and OHS scores as anchors were used to consider pain, physical function and patient satisfaction, as suggested in the literature [28]. PASS thresholds of FJS-12 were calculated, using the 75th percentile of the cumulative percentage curve of patients who consider themselves in an acceptable state of symptoms, and the ROC curve point, which maximized the Youden index. Statistical analyses were performed using SPSS version 26 (IBM Inc., Armonk, NY, USA).

The FJS-2′s MCID and PASS in patients who underwent THA from baseline to 6 months post-operative follow-up were calculated. Both distribution-based and anchor approaches to calculate MCID were adopted. The MCID of FJS-12 is 17.5. Patients who reported this change in the FJS-12 score achieved a clinically significant improvement after THA, from baseline to 6-month post-operative follow-up. The FJS-12′s PASS is 69.8; therefore, an FJS-12 value at least of 69.8 at 6-month follow-up indicates patient satisfaction about the symptoms.

The study was conducted according to the guidelines of the Declaration of Helsinki, and approved by the Institutional Review Board of Campus Bio-Medico University of Rome (COSMO study, Protocol number: 78/18 OSS ComEt CBM, 16/10/18).

The data presented in this study are available on request from the corresponding author. The data are not publicly available due to privacy. 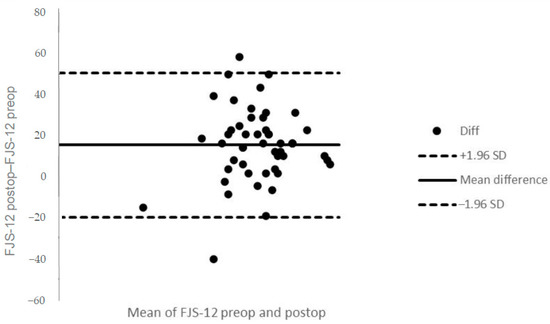 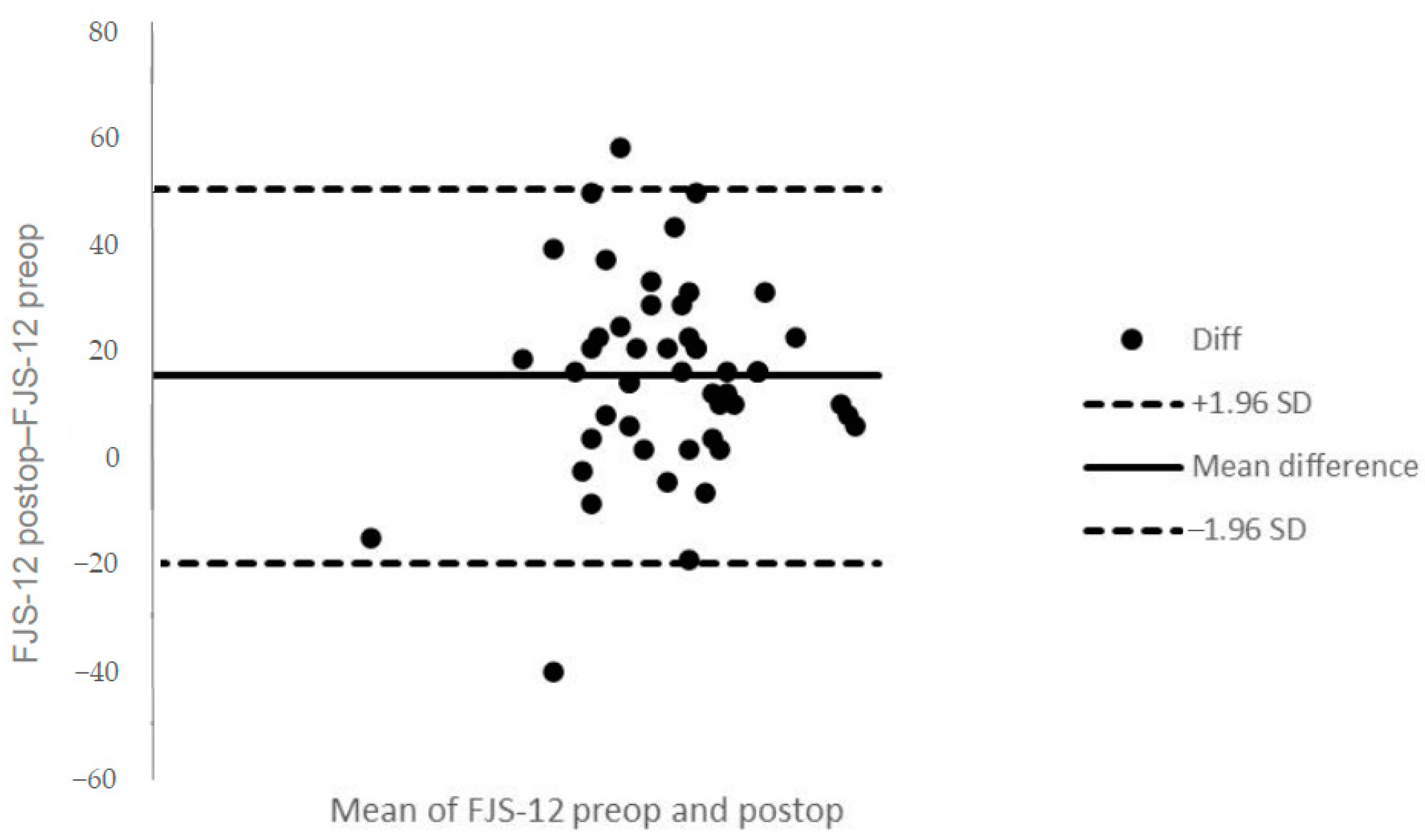 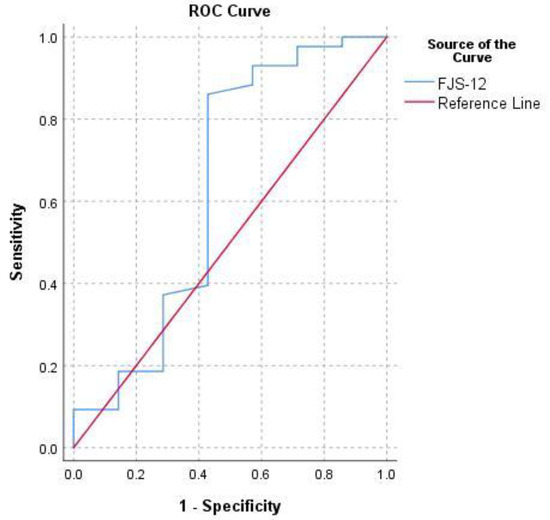 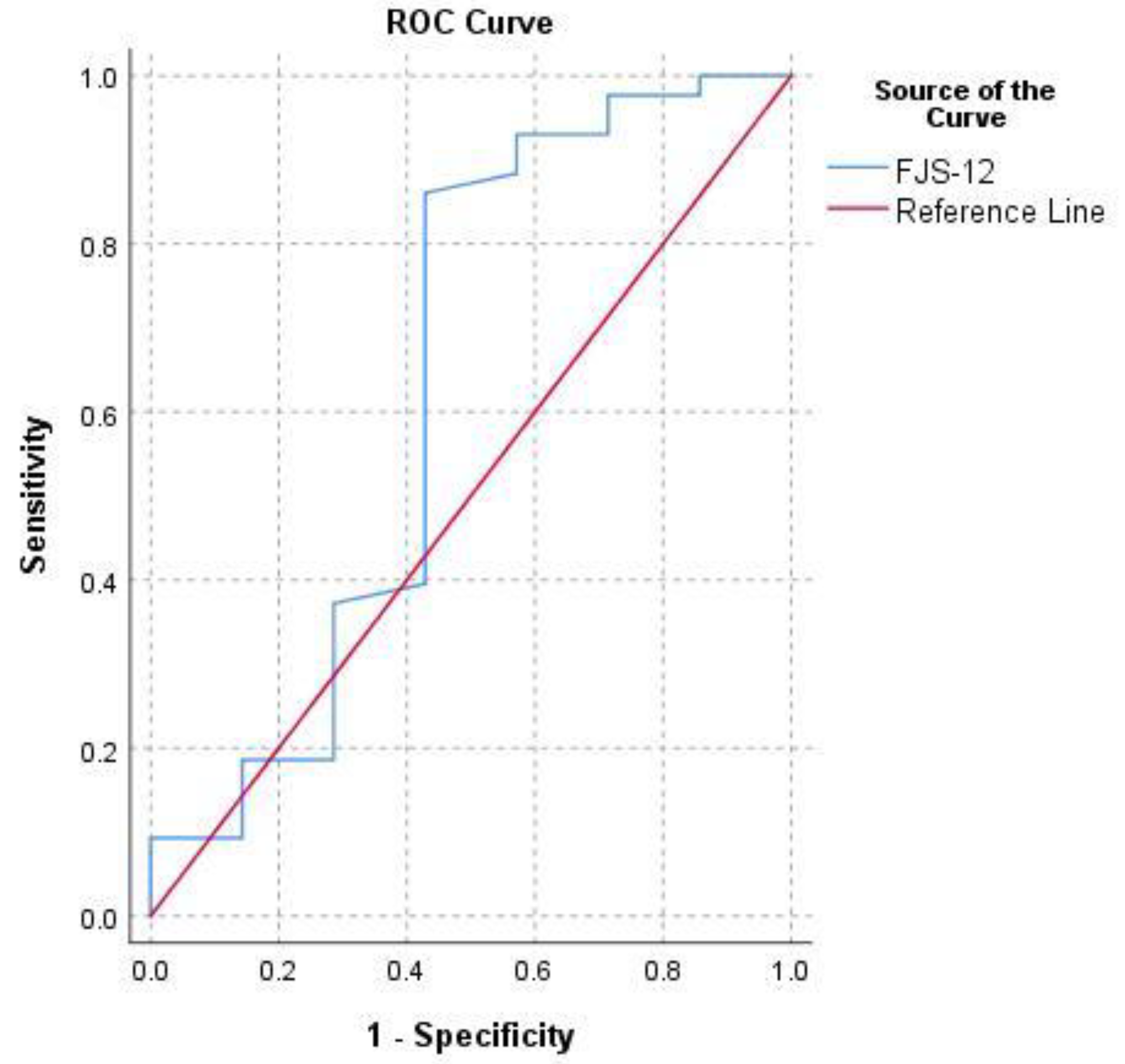 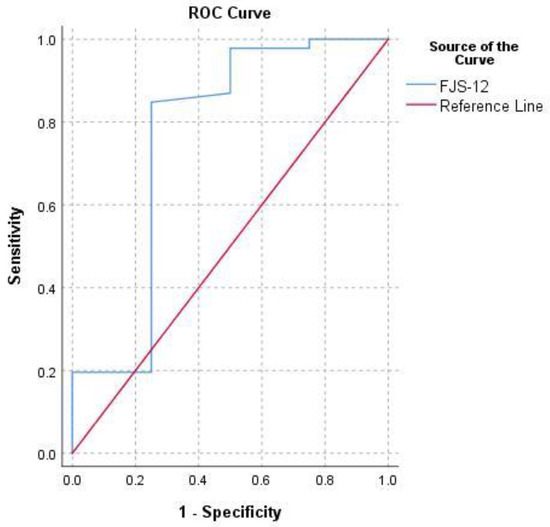 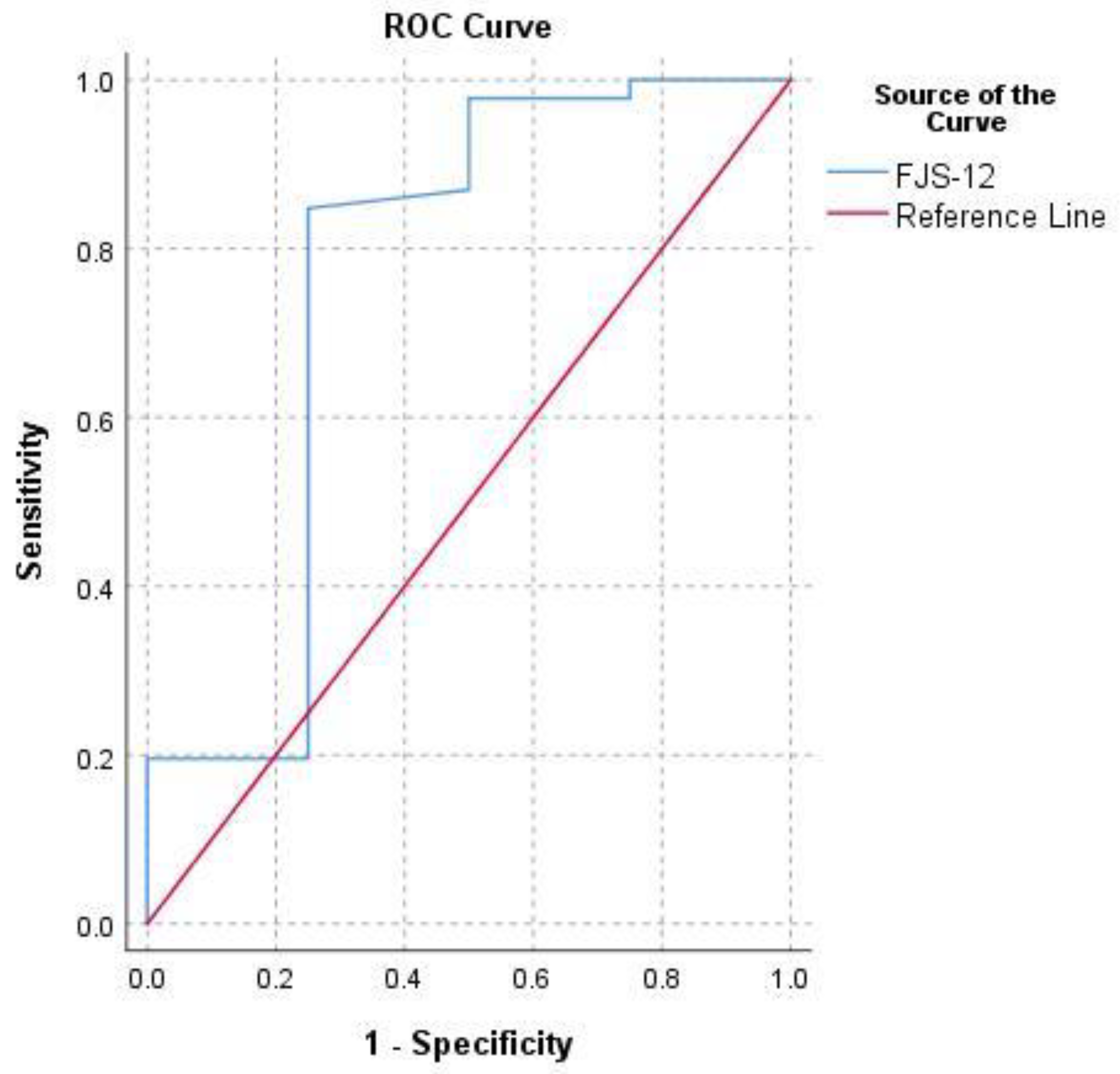