Association of Gender, Painkiller Use, and Experienced Pain with Pain-Related Fear and Anxiety among University Students According to the Fear of Pain Questionnaire-9
Next Article in Special Issue

To Adapt or Not to Adapt: The Association between Implementation Fidelity and the Effectiveness of Diabetes Self-Management Education
Previous Article in Special Issue

Effect of a Preventive Oral Health Program Starting during Pregnancy: A Case-Control Study Comparing Immigrant and Native Women and Their Children

The objective was to evaluate whether including pregnant women in a preventive dental program prevented the appearance of caries in their children up to the age of 6, and whether the effect was similar in children of immigrant and non-immigrant women. In phase I, 90 pregnant women, 45 immigrants and 45 natives, were taught about the development and prevention of caries. In phase II the oral health of their children at the age of 6 (n = 90) was evaluated, along with a control group of children of natives and immigrants of the same age (n = 90). A survey was used to determine participants’ backgrounds and habits. A multivariate study of the results was performed using R-core software. The number of children without caries was 128 (71.1%), whereas 52 (28.9%) had caries, 15 from the protocol (16.67%) and 37 from the control group (41.11%), with statistically significant differences (p < 0.001). The mean number of caries for the children in the protocol was 0.62 ± 2 and in the control group it was 1.88 ± 2.9 (p = 0.001). In the multivariate analysis the risk of developing caries was higher for the condition of being the child of an immigrant (OR = 11.137), inadequate oral health (OR = 4.993), the children being overweight at the age of 6 (OR = 10.680), and the consumption of candies (OR = 5.042). In conclusion, the preventive protocols started during pregnancy reduced caries in participants’ children, which suggests that these protocols should be encouraged. Because immigrant children are more vulnerable to caries, they and their parents should be included in preventive programs once they arrive in the host country. View Full-Text
Keywords: caries; primary prevention; immigrant; pregnant woman; health services; randomized trial caries; primary prevention; immigrant; pregnant woman; health services; randomized trial
►▼ Show Figures 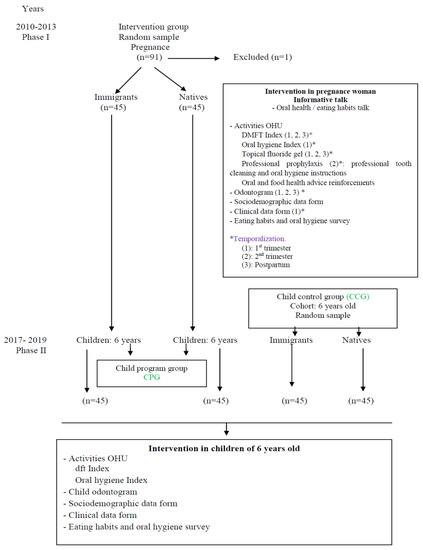 María García-Pola
I am a teacher of Oral Medicine and of Preventy at the Oviedo University (Asturias, Spain)
Zoom | Orient | As Lines | As Sticks | As Cartoon | As Surface | Previous Scene | Next Scene
We use cookies on our website to ensure you get the best experience. Read more about our cookies here.
Accept
We have just recently launched a new version of our website. Help us to further improve by taking part in this short 5 minute survey here. here.
Never show this again