Factors Associated with Practice of Chemical Pesticide Use and Acute Poisoning Experienced by Farmers in Chitwan District, Nepal
Previous Article in Journal

“It Is Like Medicine”: Using Sports to Promote Adult Women’s Health in Rural Kenya

Adherence Is More Than Just Being Present: Example of a Lay-Led Home-Based Programme with Physical Exercise, Nutritional Improvement and Social Support, in Prefrail and Frail Community-Dwelling Older Adults

Background: Little is known about the implementation of lifestyle interventions in frail, community-dwelling people. This study highlights different domains of adherence to explain an effectively delivered home-based intervention. Methods: Eighty prefrail and frail persons (≥65 years) participated in a physical training, nutritional, and social support intervention over 24 weeks. A detailed log book was kept for comprehensive documentation in order to assess adherence and further organizational, exercise, and nutritional parameters. Results: Participants reached an adherence rate (performed home visits/number of planned visits) of 84.0/80.5% from week 1–12/13–24. Out of those, 59% carried out ≥75% of the offered visits. Older age was associated with a higher adherence rate. A mean of 1.5 (0.6) visits/week (2 were planned) were realized lasting for a mean of 1.5 (0.9) hours (154% of the planned duration). Per visit, 1.2 (0.6) circuits of strength training were performed (60.5% of the planned value) and 0.5 (0.3) nutritional interventions (47%). After twelve months, 4.2% still carried out the home visits regularly and 25.0% occasionally. Conclusion: Adherence is much more than “being there”. Adherence rate and category are limited parameters to describe the implementation of a complex lifestyle intervention, therefore a comprehensive documentation is needed.
Keywords: complex intervention study; adherence; lay-led intervention; community-dwelling people; frailty; buddy complex intervention study; adherence; lay-led intervention; community-dwelling people; frailty; buddy

This randomized, controlled trial took place in Vienna (Austria) and included a physical training and nutrition (PTN) group and a social support (SoSu) group. The study design and planned interventions were published before the participants were enrolled [31]. The sample size calculation was described in detail in the study protocol and was based on handgrip strength. Participants in both groups were community-dwelling prefrail and frail persons (aged > 65 years), who were visited at home from lay volunteers called “buddies” over 24 weeks. In this face-to-face intervention, home visits were planned twice a week and each session was scheduled for 1 h. Eighty couples of prefrail/frail persons and their buddies participated in the study. A buddy was allowed to support more than one prefrail/frail participant. The health status, quality of life, nutritional status, and physical activity parameters were already published earlier [32,33,34].

2.1.1. Characteristics of the Participants

Prefrail and frail community-dwelling people older than 65 years were enrolled in this study. The frailty status was obtained using the Frailty Instrument for Primary Care of the Survey of Health, Ageing, and Retirement in Europe (SHARE-FI) [35]. For the case that a robust person was undernourished, participation in the study was accepted. Malnutrition was assessed with the Mini Nutritional Assessment Short-Form (MNA-SF) questionnaire [36]. People with planned admission to a nursing home, with acute or planned chemo- or radiotherapy, with impaired cognitive functions, with insulin-treated type 2 diabetes mellitus, or chronic obstructive pulmonary disease stage III or IV were excluded from the study.
The prefrail/frail participants were visited by lay volunteers (buddies) who were aged ≥50 years [37]. Both, the prefrail/frail participants and their buddies were asked to participate in the study in either the PTN or SoSu group for at least six months.

The intervention was divided into two phases, with each period lasting for 12 weeks. Thus, over a period of 24 weeks, home visits were planned twice a week. During the first 12 weeks, in the PTN group, buddies and the prefrail/frail subjects performed a standardized strength training twice a week, for which the buddies were trained. The buddies also addressed various nutritional topics, e.g., hydration in a standardized manner. The education of the buddies was delivered by the project staff, which included medical doctors, nutritional scientists, nutritionists, sport scientists, physiotherapists, and psychologists. The education consisted of four modules, each lasting for 3 h. In short, the standardized physical activity intervention consisted of 5 min of mobilization and warm-up exercises and 30 min of strength training. According to the study protocol, two circuits with six different strength exercises, each with 15 repetitions, were planned within a visit. The standardized nutritional intervention was based on three main messages: fluid intake, animal and plant protein intake, and appropriate energy intake. The other component of the nutritional intervention was the use of a modified Harvard Healthy Eating Plate [38], the so-called “Healthy for Life Plate” aimed to exemplify the quantity and composition of daily food intake [31].
Over the first 12 weeks, for the SoSu group, the buddies were encouraged to visit the older persons twice a week and performed various social activities together, such as playing games, talking, sharing interests, or doing cognitive training exercises. Within this period, the prefrail/frail participants in the SoSu group did not perform the exercise regime, nor was the nutritional support given.

2.2. Measurements of Different Aspects of Adherence

For 24 weeks for each single visit a comprehensive documentation was done by the buddies using a standardized log book. This included organizational items, but also details of the physical training and nutritional intervention. The different domains of adherence were assessed after 12 weeks (follow-up 1) and after 24 weeks (follow-up 2) and are shown in Figure 1. After 12 months, the long-term participation (continuation) was assessed.

2.2.2. Comprehensive Documentation of the Lifestyle Intervention

After the intervention week 24, all participants (prefrail/frail persons and their buddies) retrospectively answered three questions regarding self-perceived adherence to the program over the last 12 weeks. The questions were:

The long-term maintenance of the visits six months after the official ending of the study was defined as continuation. Therefore, telephone interviews were performed 12 months after the intervention started. Buddies were asked:

The study was approved by the local ethics committee (Ref: 1416/2013) and was registered at ClinicalTrials.gov (NCT01991639). The study was performed in accordance with the Declaration of Helsinki [40].

3.1. Baseline Characteristics of the Participants

In this study, 80 couples were included. Baseline data for 80 prefrail/frail persons and their buddies (N = 70) were investigated. According to the SHARE-FI classification almost all participants were prefrail or frail. Further baseline characteristics of the study population are shown in Table 1.

As shown in Table 2, adherence data were calculated for the PTN and SoSu groups at both follow-up points. Although the data do show a higher adherence rate in the PTN group compared to the SoSu group after 12 and 24 weeks, this was not statistically significant in the between-group comparisons. According to the comparison within the same group adherence declined within the second 12 weeks-period, but again not significantly. Adherence categories were significantly different in the PTN group between follow-ups (p = 0.018). Adherence is presented in Table 2.
After 24 weeks, 21 prefrail/frail participants (26%) had dropped out. Of these drop-outs, three (14%) died, another six (28%) dropped out for medical reasons and 1 (5%) person showed an aggressive attitude towards the buddy and was therefore excluded. The majority (11 persons, 52%) dropped out for unspecified personal reasons.

3.3. Quality of the Intervention (Based on the Comprehensive Documentation)

After 12 weeks, the number of missed visits (3.0 ± 3.8) in the SoSu group due to buddies was significantly higher than in the PTN group (1.6 ± 2.2 visits, p = 0.028). In addition, at follow-up 2, significantly more visits were cancelled by the prefrail/frail individuals than by the buddies. After 24 weeks, 59 prefrail/frail participants were included in the analysis based on the completed log book. The quality of the delivered interventions is shown in Table 3. Only couples that performed the PTN regime in the observed period of time were included in the analysis.

The SHARE-FI category and age were significantly associated with the adherence category in the prefrail/frail participants (Table 4), while no such association was found for the buddies (Table 5).

For this analysis, participants were interviewed by telephone. The home visits were regularly performed by 4.2%, sporadically by 25% of the participants, and 70% did not answer that question. The mean number of home visits in the last 6 months was 19.3 (15.3), which resulted in a mean number of 18.0 (16.3) physical training sessions and in 13.75 (15.05) nutritional interventions.

To sum up the results, our study showed high adherence rates regarding the execution of the home-visits, but showed significant differences in the realization of the actually delivered intervention compared to the study protocol. So, we conclude that adherence rate alone is not adequate to evaluate the implementation of an intervention. Moreover, “being there” is the prerequisite for measures—but cannot show what was done during the intervention, i.e., it does not give any information on the quality of the intervention. Thus, comprehensive documentation led to an important gain in knowledge on how an intervention was done—and was accepted by the participants. These findings led to important questions:

–
How much of the planned intervention has to be done to gain effects?
–
How should the overall adherence to an intervention respectively the performed quality be described?
–
Is a psycho-social context even more important than a physiological context?

In conclusion, lay volunteers can carry out home-based lifestyle interventions in community-dwelling older people, resulting in good adherence rates. Further parameters to document the intervention help explain adherence rates—as well as other study outcomes. Comprehensive documentation is needed in lifestyle interventions: it should not be focused only on the intervention itself but also on the level of social support, because the interpersonal contact is a decisive factor for the successful implementation of lifestyle programs. Within the current study, it was shown that laymen can efficiently carry out a physical activity and nutritional support program in community dwelling older people. However, similar interventions can easily be transferred to other settings like community senior living centers that would also benefit from a program like this.

This research was funded by WWTF-Vienna Science and Technology Fund, reference number LS12-039 within the Life Sciences Call 2012.

See Section 2.3. The study was conducted according to the guidelines of the Declaration of Helsinki, and approved by the local Ethics Committee (Ref: 1416/2013) and was registered at ClinicalTrials.gov (NCT01991639). 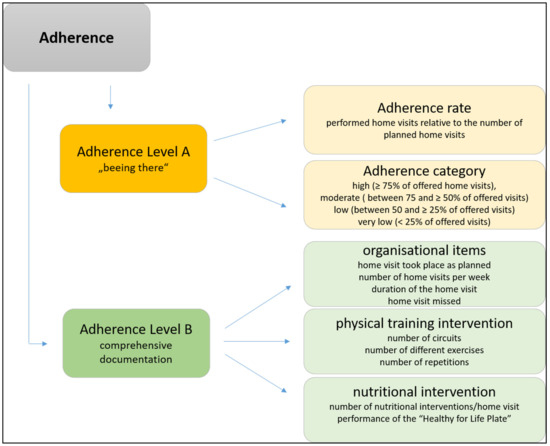 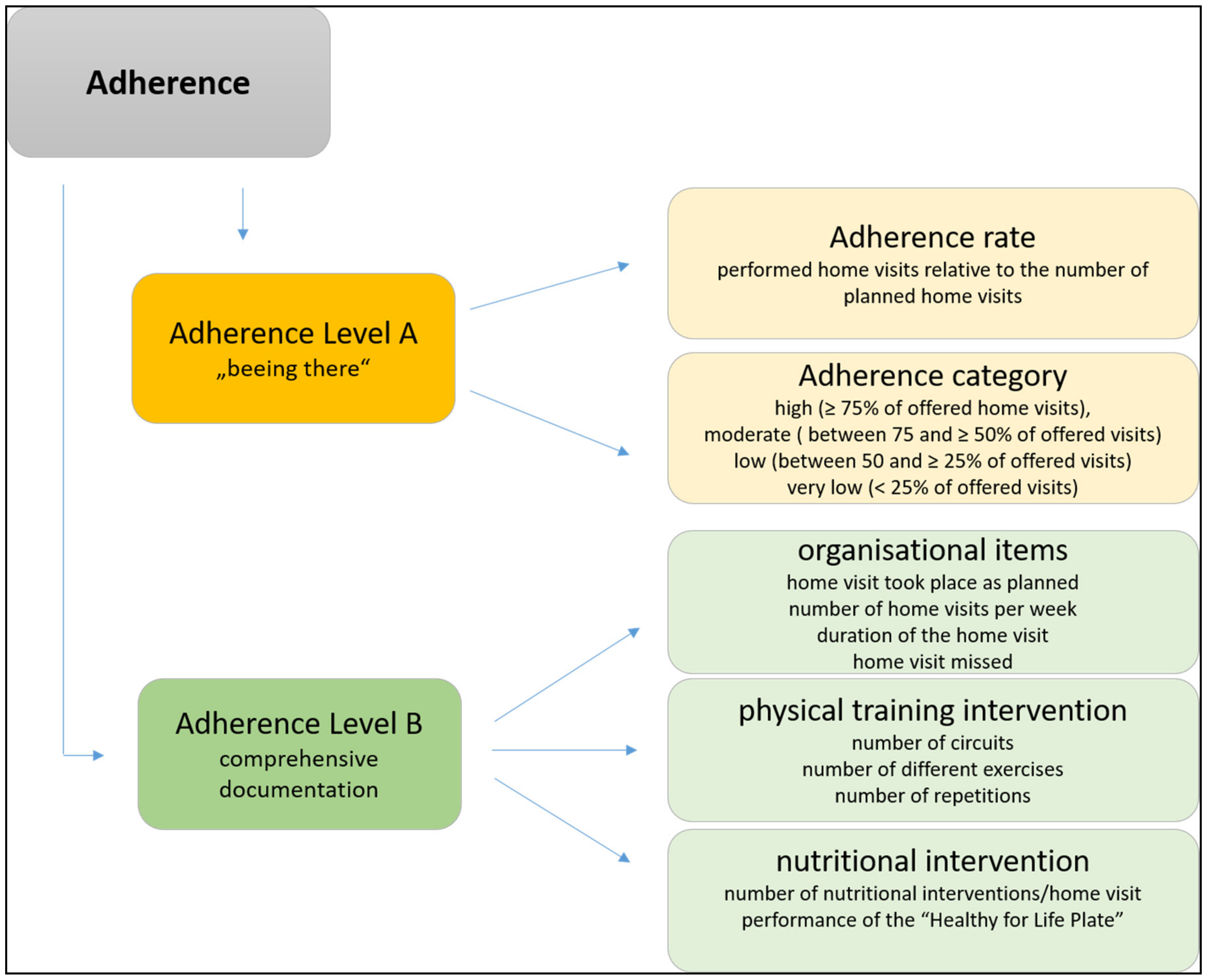