Food Patterns According to Sociodemographics, Physical Activity, Sleeping and Obesity in Portuguese Children
Next Article in Special Issue

Leg Length, Body Proportion, and Health: A Review with a Note on Beauty

For over 30 years it has been established that the Entamoeba histolytica protozoan included two biologically and genetically different species, one with a pathogenic phenotype called E. histolytica and the other with a non-pathogenic phenotype called Entamoeba dispar. Both of these amoebae species can infect humans. E. histolytica has been considered as a potential pathogen that can cause serious damage to the large intestine (colitis, dysentery) and other extraintestinal organs, mainly the liver (amebic liver abscess), whereas E. dispar is a species that interacts with humans in a commensal relationship, causing no symptoms or any tissue damage. This paradigm, however, should be reconsidered or re-evaluated. In the present work, we report the detection and genotyping of E. dispar sequences of DNA obtained from patients with amebic liver abscesses, including the genotyping of an isolate obtained from a Brazilian patient with a clinical diagnosis of intestinal amebiasis that was previously characterized as an E. dispar species. The genetic diversity and phylogenetic analysis performed by our group has shown the existence of several different genotypes of E. dispar that can be associated to, or be potentiality responsible for intestinal or liver tissue damage, similar to that observed with E. histolytica. View Full-Text
Keywords: human amebiasis; E. histolytica; E. dispar;genetic diversity; phylogeny human amebiasis; E. histolytica; E. dispar;genetic diversity; phylogeny
►▼ Show Figures 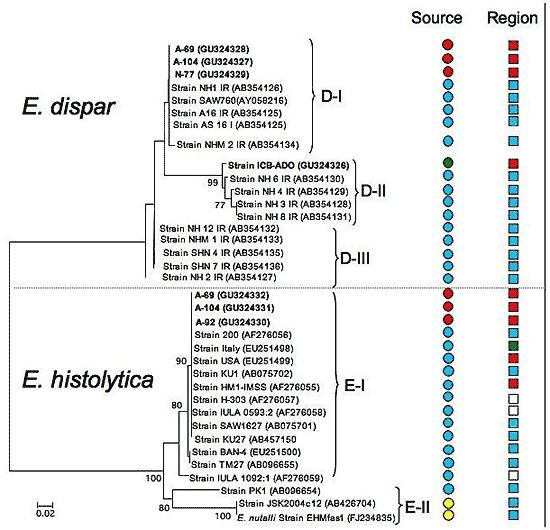