The dissolved organic matter (DOM) is one of the important factors for controlling water quality. The behavior and constitutions of DOM is related to the risk of human health because it is able to directly or indirectly affect the behavior, speciation and toxicity of various environmental pollutants. However, it is not easy to know the contents of DOM components without using various complicated and time consuming analytical methods because DOM is a complex mixture and usually exists at low concentration. Here, we describe the fluorescence properties of DOM components in water samples collected from four rivers in Toyama, Japan by means of the three-dimensional excitation-emission matrix (3DEEM) fluorescence spectroscopy. In order to evaluate the alterations of DOM components in each of the river during the flow from upstream to downstream, the patterns of relative fluorescence intensity (RFI) at six peaks which are originated from fluorophores including humic-like and protein-like components were investigated. The changes in the patterns of RFI values at each of the peak and the concentration of dissolved organic carbon (DOC) for each river water sample were discussed in connection with the differences of land use managements and basic water quality parameters, such as pH, EC, turbidity, Fe3+, T-N, NO3-N, T-P, PO4-P, chlorophyll a, DOC and N/P ratio. The DOC concentrations in the water samples collected from these rivers were relatively low (0.63–1.16 mg/L). Two main peaks which have a strong RFI value expressed a positive correlation with the DOC concentration (r = 0.557, 0.535). However, the correlations between the RFI values for other four peaks and the DOC concentration were below 0.287. The alterations of DOM components during the flow of a river from upstream to downstream were investigated from the changes in the patterns of RFI values for six fluorescent peaks. It was clarified that the great increase of RFI values in peak A and peak T from river water located in urban area showed high concentration of PO4-P and Fe3+, and low N/P ratio due to the high biological activities. The values of fluorescence index (FIX) and biological index (BIX) were as high as 1.60 and 0.72, respectively. View Full-Text
Keywords: dissolved organic matter; three-dimensional excitation-emission matrix; humic-like components; protein-like components; river water; land usage dissolved organic matter; three-dimensional excitation-emission matrix; humic-like components; protein-like components; river water; land usage
►▼ Show Figures 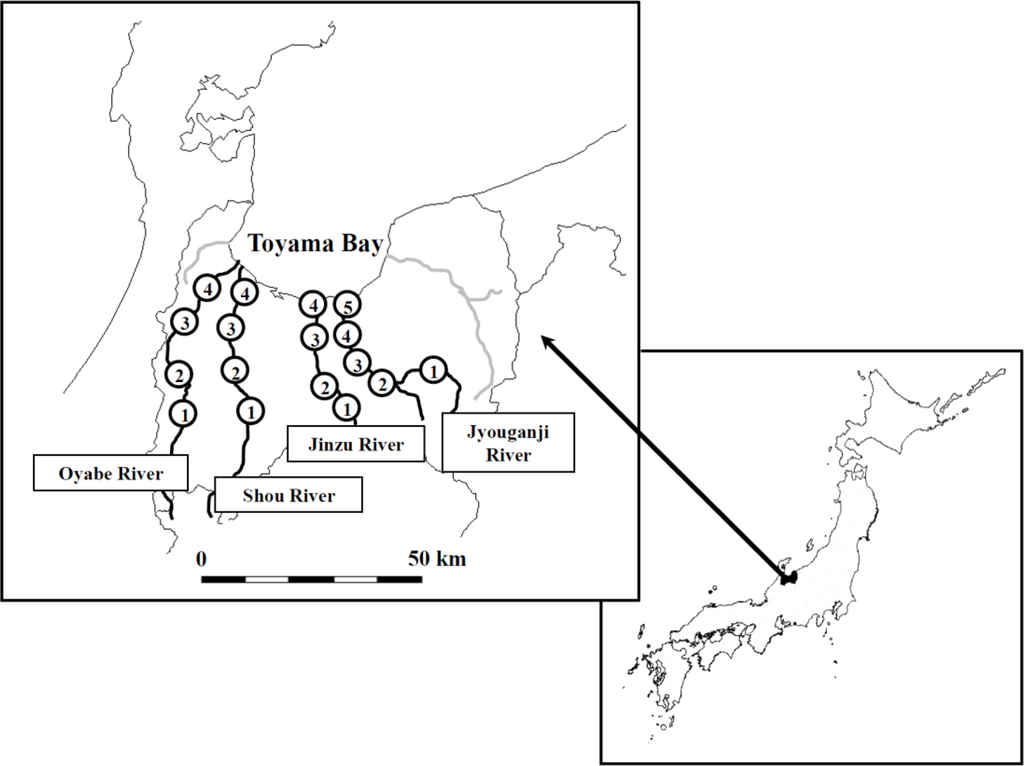