Descriptive Study on Parents’ Knowledge, Attitudes and Practices on Antibiotic Use and Misuse in Children with Upper Respiratory Tract Infections in Cyprus
Next Article in Special Issue

Increasing and Decreasing Alcohol Use Trajectories Among Older Women in the U.S. Across a 10-Year Interval
Previous Article in Journal

Alcohol Mixed with Energy Drinks: Consumption Patterns and Motivations for Use in U.S. College Students

Binge drinking in college students is widespread and known to cause significant harms and health hazards for the drinker. One factor that may be exacerbating hazardous drinking in young people is the new popular trend of consuming alcohol mixed with energy drinks (AmED). However, rates of AmED use and motivations for AmED consumption in college students have not been well established. In this study, 706 undergraduate college students from a university in the United States participated in a web-based survey that queried self-reported alcohol, energy drink, and AmED use. In addition, motivations for using AmEDs were assessed. The results indicated that for all participants, 81% reported that they have tried at least one energy drink in the past and 36% reported consumption of at least one energy drink in the past 2 weeks. Alcohol consumption patterns were similar to findings from U.S. national surveys of college drinking, as 37% of respondents were classified as binge drinkers and 23% abstained from drinking. In the whole sample (including the alcohol abstainers), 44% reported trying AmED at least once and 9% reported AmED consumption at least once in the past 2 weeks. 78% of respondents agreed with the statement that AmEDs appeal to underage drinkers. When AmED users were asked about various motivations for consuming AmEDs, users reported that they consumed these beverages to get drunk and reduce sedation compared to alcohol alone. In conclusion, the consumption of AmEDs is common in U.S. college students. Motivations for using AmEDs include the reduction of the sedative effects of alcohol, an important interoceptive cue that one should stop drinking. View Full-Text
Keywords: alcohol; energy drinks; college students; binge; motivation for use alcohol; energy drinks; college students; binge; motivation for use
►▼ Show Figures 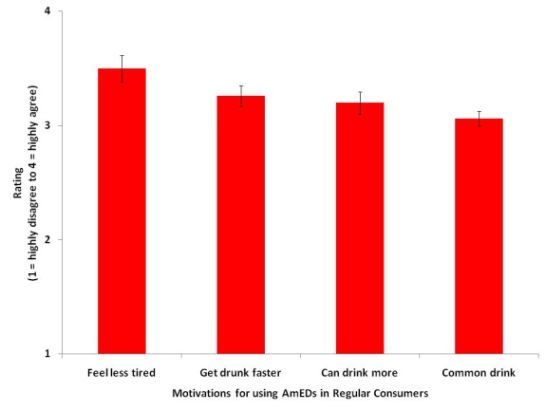