Descriptive Study on Parents’ Knowledge, Attitudes and Practices on Antibiotic Use and Misuse in Children with Upper Respiratory Tract Infections in Cyprus
Next Article in Special Issue

Increasing and Decreasing Alcohol Use Trajectories Among Older Women in the U.S. Across a 10-Year Interval
Previous Article in Journal

Alcohol Mixed with Energy Drinks: Consumption Patterns and Motivations for Use in U.S. College Students

Binge drinking in college students is widespread and known to cause significant harms and health hazards for the drinker. One factor that may be exacerbating hazardous drinking in young people is the new popular trend of consuming alcohol mixed with energy drinks (AmED). However, rates of AmED use and motivations for AmED consumption in college students have not been well established. In this study, 706 undergraduate college students from a university in the United States participated in a web-based survey that queried self-reported alcohol, energy drink, and AmED use. In addition, motivations for using AmEDs were assessed. The results indicated that for all participants, 81% reported that they have tried at least one energy drink in the past and 36% reported consumption of at least one energy drink in the past 2 weeks. Alcohol consumption patterns were similar to findings from U.S. national surveys of college drinking, as 37% of respondents were classified as binge drinkers and 23% abstained from drinking. In the whole sample (including the alcohol abstainers), 44% reported trying AmED at least once and 9% reported AmED consumption at least once in the past 2 weeks. 78% of respondents agreed with the statement that AmEDs appeal to underage drinkers. When AmED users were asked about various motivations for consuming AmEDs, users reported that they consumed these beverages to get drunk and reduce sedation compared to alcohol alone. In conclusion, the consumption of AmEDs is common in U.S. college students. Motivations for using AmEDs include the reduction of the sedative effects of alcohol, an important interoceptive cue that one should stop drinking.
Keywords: alcohol; energy drinks; college students; binge; motivation for use alcohol; energy drinks; college students; binge; motivation for use

Seven hundred and six (706) psychology undergraduate students (354 males) at Northern Kentucky University (NKU) completed an anonymous Internet-based online survey of beverage consumption patterns. NKU (Highland Heights, KY, USA) is a 4-year public university with an undergraduate enrollment of approximately 12,000 students. 1,210 students from the psychology department were eligible to participate in this survey during the fall semester, and 706 were recruited, resulting in a 58% response rate. Note that students were offered multiple choices of research studies to participate in, to limit the coercive aspect of recruiting. Informed consent was obtained from all participants in accordance with the university’s institutional review board for the protection of human subjects. Participants received partial course credit for participation in psychology research for completing the survey. Data collection occurred during September, October and November of 2008.

The use of a web-based survey ensured the complete anonymity of responses and that responses of participants could not be tied to personal information including the name or course instructor or any other identifying feature of the participant. Given that the legal drinking age is 21 years in the U.S., anonymous data collection afforded us greater ability to recruit more subjects without participants having concerns about the legal ramifications of admitting to their illegal alcohol consumption activities. Participants were informed that the survey contained 188 questions and would take approximately 45 minutes to complete. The questions queried demographic information (age, gender and race), energy drink consumption patterns (rates of use), alcohol consumption patterns, consumption patterns of alcohol mixed with energy drinks (AmED) and motivations for using AmEDs. The demographic and alcohol use questions were similar to those used in Harvard College Alcohol Surveys (CAS) [27]. These questions ask the participant about drinking behavior in the past 2 weeks. For example, the participant would be asked, “Think back over the last 2 weeks. How many times did you have 5 or more drinks in a row?”. The energy drink and AmED questions were modified based on the CAS survey questions. Additional questions were developed after reviewing the available published surveys regarding energy drink and AmED use studies [18,19,25]. A small pilot study at the university revealed additional motivations that should be included for AmED use. Some questions had yes/no responses (e.g., Have you consumed an energy drink in the past 2 weeks?). Other questions pertaining to motivations for use utilized a 4-point Likert-type scale with response options of 1 (strongly disagree), 2 (disagree), 3 (agree) and 4 (strongly agree).
Upon completion of data collection, participants were classified as binge and non-binge drinkers based on one widely-used definition of a binge-drinking episode as drinking five or more drinks on an occasion in the past 2 weeks for men and four or more drinks on an occasion in the past 2 weeks for women [2–6].

The goals of data analysis were to: (1) report prevalence estimates of energy drink consumption, alcohol consumption, and AmED consumption; and (2) examine the motivations for using AmEDs in the regular users of these beverages. For motivations for use, one-sample t-tests (2-tailed) were utilized to test against the null value of 2.5, since those items were responded to on a 4-point Likert scale with 2.5 as the midpoint between the ratings of 2 (disagree) and 3 (agree). All analyses were performed using SPSS v.17.0 and the alpha value was set at .05.

Seven hundred and six participants (354 males) with a mean (SD) age of 20.9 (5.3) years participated in this study. The self-reported racial make-up of the sample was 88.7% Caucasian, 5.5% African-American, 1.7% Hispanic/Latino, 1.4% Asian American, and 2.7% other (which included American Indian, Alaska Native, Native Hawaiian, Pacific Islander, and multiracial). Participants identified his or her class rank as freshman (58.4%), sophomore (17.3%), junior (13.0%), senior (10.1%), or other (1.3%, which included continuing education or graduate study). Greek affiliation was queried with 8.9% reporting membership in a fraternity or sorority.

Table 3 illustrates the prevalence estimates for alcohol mixed with energy drinks (AmED) consumption for all survey respondents (including those individuals who did not drink any alcohol in the past 2 weeks). For the entire sample, 44.0% had tried AmEDs or were regular consumers of AmEDs. Recent use of AmEDs (in the past 2 weeks) was reported by 9.3% of the entire sample.

Table 4 lists the responses from the regular users of AmEDs (n = 66, 9.3% of the whole sample) for possible motivations for using AmEDs. As participants responded on a 4 point Likert scale ranging from 1 (highly disagree) to 4 (highly agree), one-sample t-tests were used to test against the null value of 2.5 to reveal possible motivations for using these beverages. Participants were likely to agree with statements such as: it is a common alcoholic drink, AmEDs allow you to get drunk faster, and I don’t feel as tired when I drink AmEDs. AmED consumers also agreed that AmEDs appeal to underage drinkers (p < 0.001). For reference, the same finding was observed for the entire sample (n = 706) with 78% of the sample agreeing or strongly agreeing with the statement that AmEDs appeal to underage drinkers. The top 4 highly rated motivations that were specific to AmEDs are presented in Figure 1.

The author thanks Dana Vice for her assistance with data collection. This work was supported by Award Number R15AA019795 from the National Institute on Alcohol Abuse and Alcoholism and a Faculty Fellowship awarded by the Kentucky Biomedical Research Infrastructure Network (NIH grant P20RR016481). 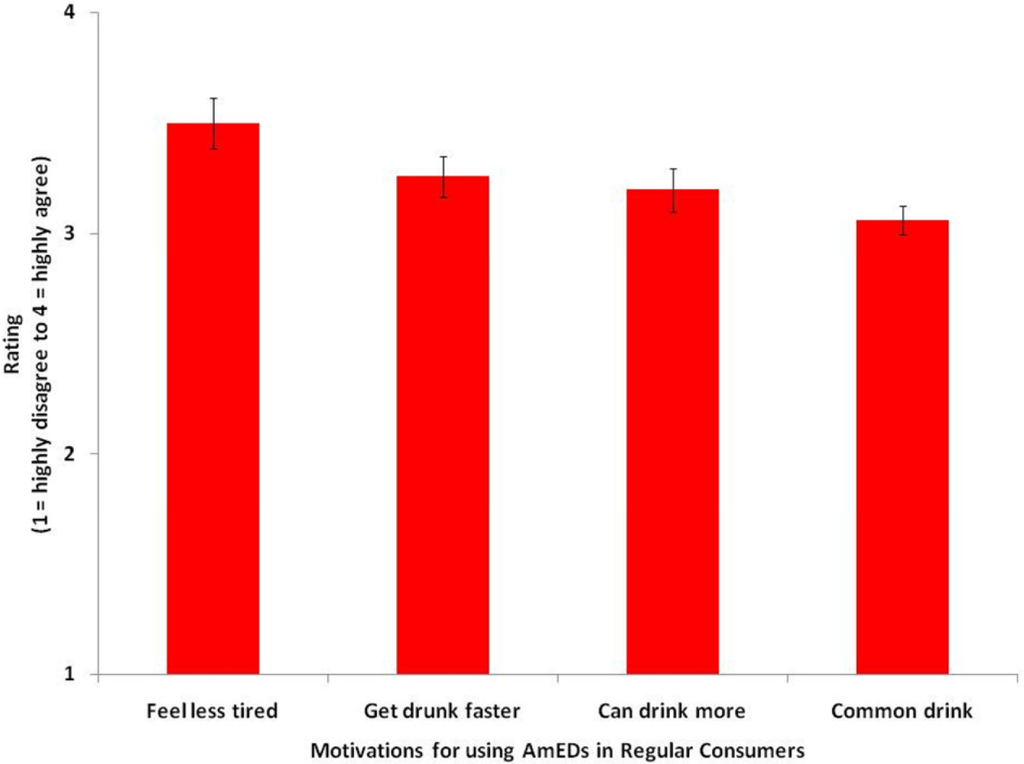 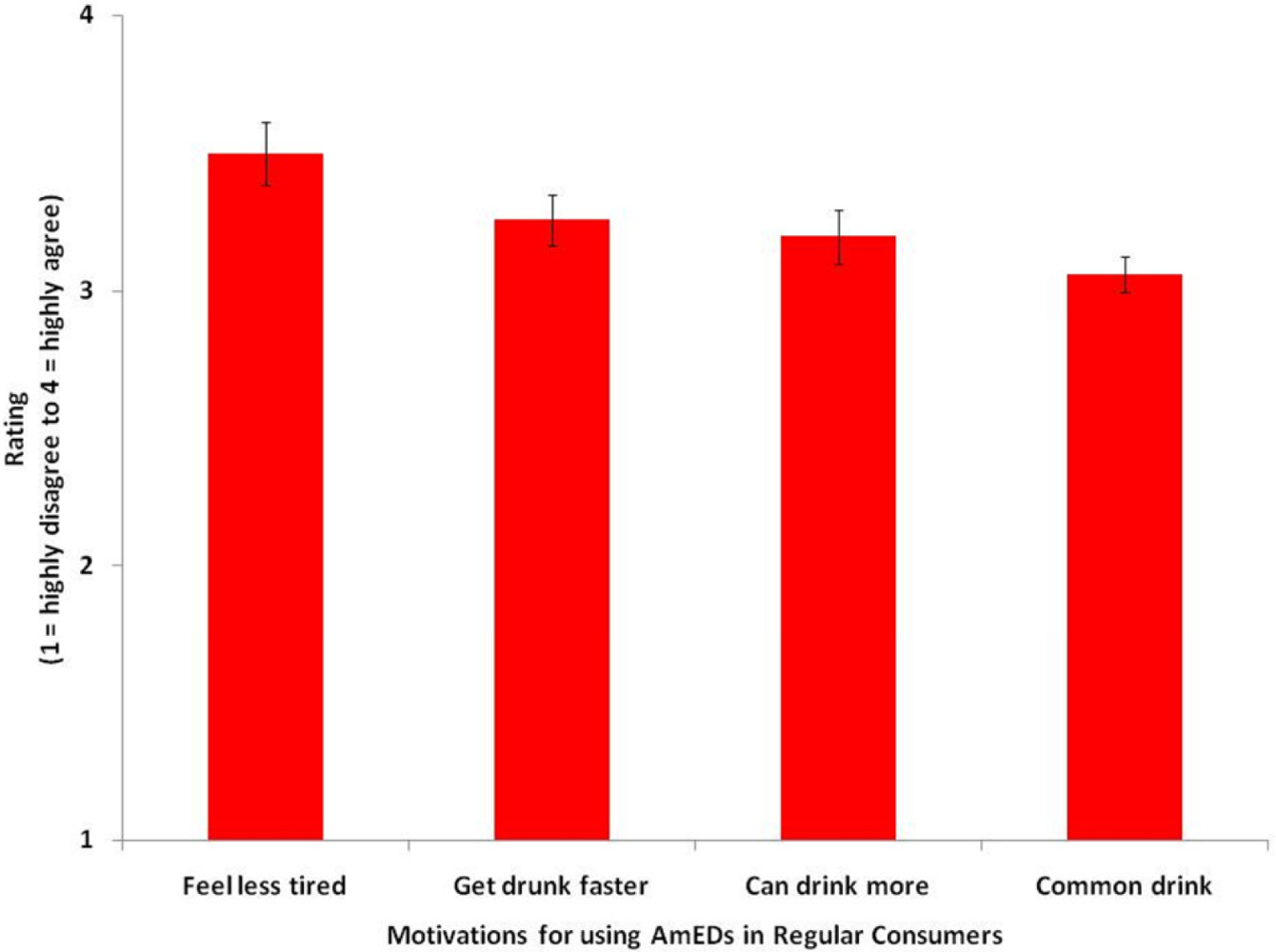 Table 4. Motivations for using AmEDs in regular users (n = 66). Responses were made on a 4 point Likert scale ranging from 1 (highly disagree) to 4 (highly agree). Significance refers to a one-sample t test (2-tailed) testing against a 2.5 null value.