Increasing and Decreasing Alcohol Use Trajectories Among Older Women in the U.S. Across a 10-Year Interval

The present study assesses the validity and reproducibility of two occlusal indices for epidemiological studies—the Dental Aesthetic Index (DAI) and the Dental Health Component of the Index of Orthodontic Treatment Need (DHC-IOTN) for the identification of orthodontic treatment needs. The total of 131 study models was examined by an examiner (orthodontic specialist) for the determination of the DAI and DHC-IOTN. Thirty days later, further assessment was performed to determine the reproducibility. The duration of each exam was measured in seconds with a stopwatch. The indices were compared by a panel of three experts in orthodontics to evaluate validity. The intra-examiner reliability evaluation resulted in an intraclass correlation coefficient of 0.89 for the DAI (95% CI = 0.64 to 1.0) and 0.87 for the DHC-IOTN (95% CI = 0.56 to 0.96). The time spent on the evaluation of the DHC-IOTN was less than the time spent on that of the DAI (P < 0.001). The accuracy of the indices, as reflected by the area under the receiver-operating characteristic curve, was 61% for the DAI (95% CI = 51 to 70; p = 0.037) and 67% for the DHC-IOTN (95% CI = 58 to 77; p = 0.001). Both indices presented good reproducibility and validity.
Keywords: indexes; orthodontics; epidemiology indexes; orthodontics; epidemiology

Since the 1960s, considerable effort has been made to develop a valid, reproducible and standardised orthodontic index. Occlusal indices such as the Index of Orthodontic Treatment Need (IOTN) [1], and the Dental Aesthetics Index (DAI) [2] have been developed to rank malocclusion according to the level of treatment need. Occlusal indices can be defined as methods for determining the level of treatment need or the amount of deviation from normal occlusion and can be used for the evaluation of individual patients and populations [3]. Occlusal indices such as the DAI [2] and the IOTN [1] are used to determine the need or priority for orthodontic treatment in epidemiological surveys.
The Dental Aesthetic Index (DAI), adopted by the World Health Organization, evaluates 10 occlusal characteristics: overjet, negative overjet, tooth loss, diastema, anterior open bite, anterior crowding, anterior diastema, width of the anterior irregularities (mandible and maxilla) and antero-posterior spring relationship [2]. The DAI has four stages of malocclusion severity: a score lower than or equal to 25 (no or slight treatment need), a score between 26 and 30 (elective treatment), a score between 31 and 35 (treatment highly desirable) and a score greater than 36 (treatment mandatory) [4]. The IOTN records the need for treatment based on two components: the Dental Health Component (DHC) and the aesthetic component (AC). The DHC-IOTN consists of a hierarchical scale with five levels: level 1 represents little or no need for treatment and level 5 represents a great need for treatment. It evaluates the malocclusion by means of five characteristics: tooth loss, overjet, crossbite, displacement of the contact point, and overbite [1].
Thus, despite having a similar goal, the DAI and the DHC-IOTN exhibit differences that determine their ability to predict malocclusion and the need for orthodontic treatment. Moreover, the IOTN has been described as an index for easy use [1]. In Brazil, the DAI has been used in national epidemiological surveys organised by the Ministry of Health. Other epidemiological surveys, using DAI or IOTN, were carried out in Brazil [5], Spain [6], India [7] and United States [8]. This study aimed to assess the validity and reproducibility of the DAI and the DHC-IOTN in the identification of orthodontic treatment needs.

This study was carried out between July and October 2009. The study involved the assessment of a sample of 131 pairs of dental casts selected randomly from the archive of the Specialization Course in Orthodontics at the Faculty of Dentistry, Universidade Federal de Minas Gerais, Brazil. This archive contains 198 models of oral cavities of all orthodontic patients from Universidade Federal de Minas Gerais. Models in inadequate conditions (with fractures in casts) and models of patients who had received previous orthodontic treatment were not included. The age of participants whose models were included in this study ranged from 12 to 15 years, an age group recommended in studies of occlusal indices by several authors [2,4]. The patients, whose models were evaluated, were at early permanent dentition.
The sample size calculation was performed by considering the 54.3% prevalence of orthodontic treatment need, as measured by the DAI [9], with a confidence interval of 95% and 5% of level of precision. Approval was obtained from the Ethics Committee in Research of Universidade Federal de Minas Gerais (No 0369.0.203.000-09).

First, to assess reproducibility, 13 models (10% of the total sample set) were examined on two occasions, with an interval of 30 days between examinations, using the two indices proposed in the study. The reproducibility analysis was carried out before the validation analysis.
After the reproducibility assessment, the 131 study models were examined by the researcher, an expert in orthodontics, to assess the ability of both indices to identify orthodontic treatment need. The DAI [2,4] and the DHC-IOTN [1] values were classified according to the specific criteria of each index studied. The recommendations were used to measure the DHC-IOTN in the models [10]. The aesthetic component of the IOTN was not assessed, as it presents poor association with the clinical condition when used in models [11]. The instruments used were those recommended for each index, namely the periodontal probe for the DAI and the proper ruler for the DHC-IOTN.
The gold standard of orthodontic treatment need was determined by three professors who are experts in the area of orthodontics with at least 10 years of clinical experience [12]. They examined the 131 study models separately. Each model was coded as “no need for orthodontic treatment”, “elective orthodontic treatment” or “orthodontic treatment required” based on the clinical evaluation of each one. Where there was disagreement in the assessment of the models, there was a discussion among the researchers to reach a consensus [12–14].
The DAI scores and degrees of treatment need as determined by the DHC-IOTN were regrouped in a dichotomous manner as follows: “without treatment needs” and “in need of treatment”. The DAI scores were dichotomised as “no need for treatment” (DAI ≤ 25) and “in need of treatment” (DAI > 25). The DHC-IOTN is subdivided into three stages of severity according to the need for treatment. Grade 1 (none) and 2 (little) were considered as not requiring treatment, while Grades 3 (moderate need), 4 (great need) and 5 (very great need) were considered as in need of treatment [1] In the same way, the gold standard evaluation was dichotomised as follows: “without treatment needs” and “in need of treatment”. The latter category included “elective orthodontic treatment” and “orthodontic treatment required”. The time needed to evaluate the indices was measured by a digital stopwatch by the same researcher who evaluated the models.

To assess the reproducibility of the original DAI and DHC-IOTN values, the average estimate of the intraclass correlation coefficient for agreement (95% IC) was calculated. The Cohen Kappa coefficient (95% IC) and the Prevalence-adjusted bias-adjusted Kappa (PABAK) [15] were calculated to measure agreement between the dichotomised DAI and DHC-IOTN. An evaluation of the normality of the variable “time” was conducted using the Kolmogorov-Smirnov test. The comparison between time needed to evaluate the indices was done by the Wilcoxon test. The significance level was set at 5% for all analyses. The validation of the indices was done by calculating sensitivity, specificity, positive predictive value, negative predictive value and accuracy (area under the receiving-operating characteristic curve [ROC curve]). An optimum cutoff point for each of the indexes was determined by plotting ROC curves.

The mean (±Standard Deviation) and median DAI values obtained were 35.4 (±10.9) and 33.0, respectively. The minimum and maximum values were 19 and 98. For the ordinal DHC-IOTN, the minimum and maximum values ranged between 1 and 5. The orthodontic treatment need according to the DAI and DHC-IOTN evaluation made by the examiner were presented on Table 1.
The intra-rater reliability assessment resulted in an intraclass correlation coefficient of 0.89 for the DAI (95% IC = 0.64 to 1.0) and 0.87 for the DHC (95% CI = 0.56 to 0.96). Table 2 shows the comparison between the two indices, the Cohen Kappa and PABAK coefficients.
The time spent (in seconds) to assess the DAI and the DHC-IOTN were presented on Table 3. These variables were not normally distributed (Kolmogorov-Smirnov test, P < 0.05). The time spent to assess the DHC-IOTN was statistically lower than that for the DAI (Wilcoxon test, P < 0.001).
When comparing the two indices with the gold standard (Table 4), less agreement on the overall diagnosis of models examined for treatment needs was observed (47% according to the DAI and 52% according to the DHC-IOTN), with a significant percentage of false positives both for the DAI (41%) and the DHC-IOTN (39%).
The accuracy of the indices, as reflected by the ROC curve, was also presented (Figure 1). In the analysis of the validity of the indices (Table 5), both had great sensitivity and very low specificity, indicating a good ability to identify orthodontic treatment need in patients. However, the positive predictive value (PPV) for both indices was low, reducing the certainty of the sensitivity. Otherwise, the specificity is low but the negative predictive value is high. The new cutoff points (DAI=31, and DHC=3), have changed the properties of indexes.
The agreement between assessments of the gold standard and the DHC in three categories (need—borderline—no need) were also fair (Kappa = 0.18 [95% CI = 0.09 to 0.26]).

The DHC and the DAI are reproducible and have reasonable accuracy. The biggest problem presented is the high false positive rate compared to the gold standard. The DHC has the advantage of being an index of rapid implementation. The time spent assessing the DAI is greater than that spent assessing the DHC.

The authors are grateful to CNPq, FAPEMIG and PRPq/UFMG for the financial support. 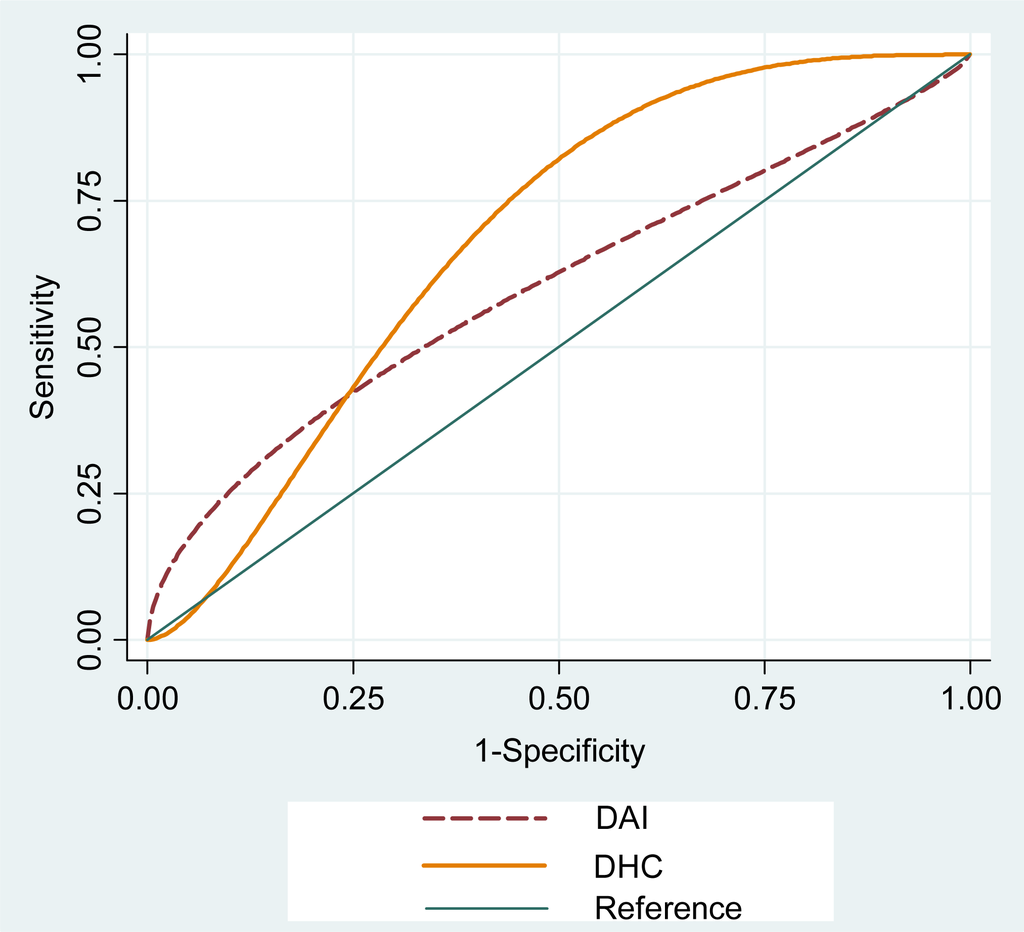 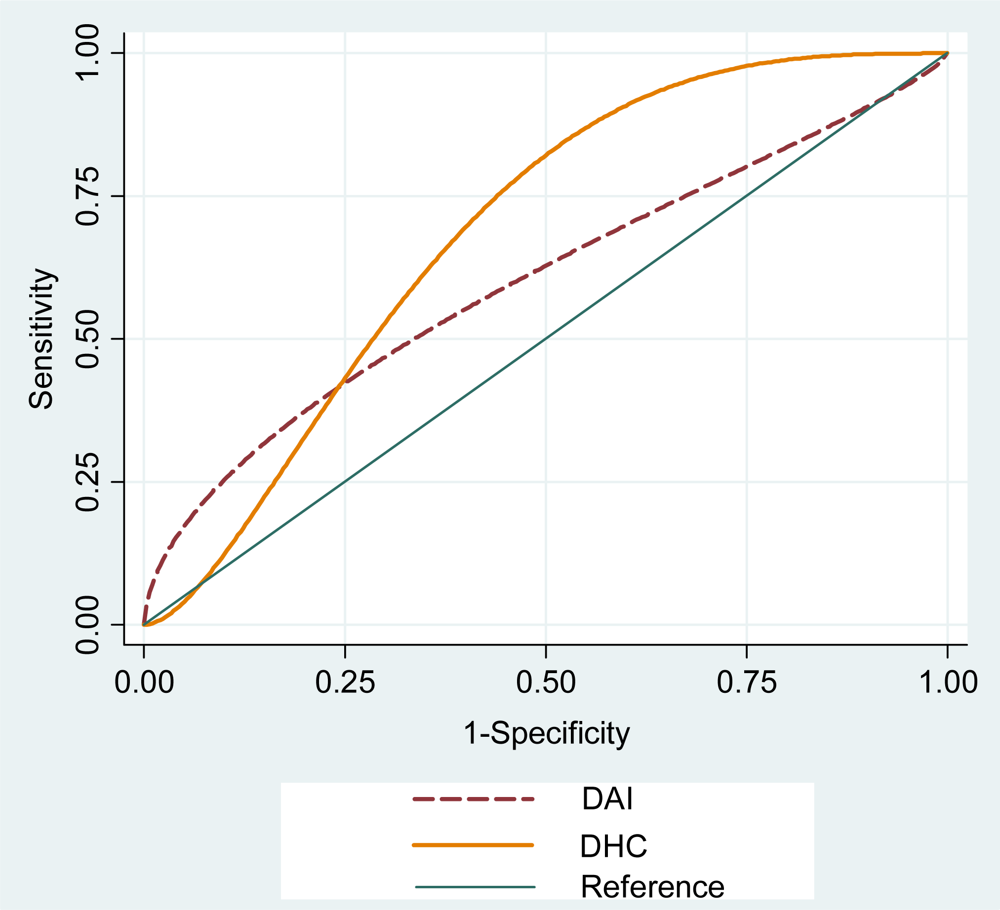 Table 3. Comparison of time spent (in seconds) to assess DAI and DHC-IOTN in Brazil, 2009.
*Wilcoxon test.

Table 4. Comparison of orthodontic treatment need between the DAI, DHC and the gold standard in Brazil, 2009.