Vulnerability of Newborns to Environmental Factors: Findings from Community Based Surveillance Data in Bangladesh
Previous Article in Special Issue

Propiconazole is a chiral fungicide used in agriculture for control of many fungal diseases on a variety of crops. This use provides opportunities for pollution of soil and, subsequently, groundwater. The rate of loss of propiconazole from the water phase of two different soil-water slurries spiked with the fungicide at 50 mg/L was followed under aerobic conditions over five months; the t1/2 was 45 and 51 days for the two soil slurries. To accurately assess environmental and human risk, it is necessary to analyze the separate stereoisomers of chiral pollutants, because it is known that for most such pollutants, both biotransformation and toxicity are likely to be stereoselective. Micellar electrokinetic chromatography (MEKC), the mode of capillary electrophoresis used for analysis of neutral chemicals, was used for analysis of the four propiconazole stereoisomers with time in the water phase of the slurries. MEKC resulted in baseline separation of all stereoisomers, while GC-MS using a chiral column gave only partial separation. The four stereoisomers of propiconazole were lost from the aqueous phase of the slurries at experimentally equivalent rates, i.e., there was very little, if any, stereoselectivity. No loss of propiconazole was observed from the autoclaved controls of either soil, indicating that the loss from active samples was most likely caused by aerobic biotansformation, with a possible contribution by sorption to the non-autoclaved active soils. MEKC is a powerful tool for separation of stereoisomers and can be used to study the fate and transformation kinetics of chiral pesticides in water and soil. View Full-Text
Keywords: capillary electrophoresis; propiconazole; stereoselectivity; biotransformation capillary electrophoresis; propiconazole; stereoselectivity; biotransformation
►▼ Show Figures 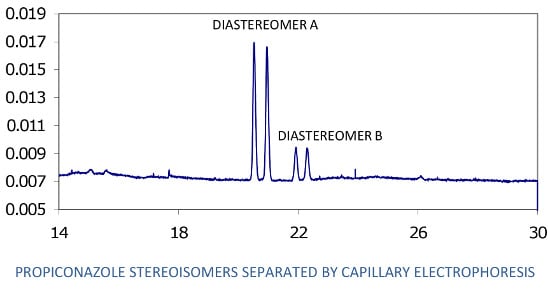