Comparison of BMI Derived from Parent-Reported Height and Weight with Measured Values: Results from the German KiGGS Study
Previous Article in Journal

Building Climate Resilience in the Blue Nile/Abay Highlands: A Framework for Action

Ethiopia has become warmer over the past century and human induced climate change will bring further warming over the next century at unprecedented rates. On the average, climate models show a tendency for higher mean annual rainfall and for wetter conditions, in particular during October, November and December, but there is much uncertainty about the future amount, distribution, timing and intensity of rainfall. Ethiopia’s low level of economic development, combined with its heavy dependence on agriculture and high population growth rate make the country particularly susceptible to the adverse effects of climate change. Nearly 90% of Ethiopia’s population lives in the Highlands, which include the critical Blue Nile (Abay) Highlands—a region that holds special importance due to its role in domestic agricultural production and international water resources. A five year study of climate vulnerability and adaptation strategies in communities of Choke Mountain, located in the center of the Abay Highlands, has informed a proposed framework for enhancing climate resilience in communities across the region. The framework is motivated by the critical need to enhance capacity to cope with climate change and, subsequently, to advance a carbon neutral and climate resilient economy in Ethiopia. The implicit hypothesis in applying a research framework for this effort is that science-based information, generated through improved understanding of impacts and vulnerabilities of local communities, can contribute to enhanced resilience strategies. We view adaptation to climate change in a wider context of changes, including, among others, market conditions, the political-institutional framework, and population dynamics. From a livelihood perspective, culture, historical settings, the diversity of income generation strategies, knowledge, and education are important factors that contribute to adaptive capacities. This paper reviews key findings of the Choke Mountain study, describes the principles of the climate resilience framework, and proposes an implementation strategy for climate resilient development to be applied in the Abay Highlands, with potential expansion to agricultural communities across the region and beyond. View Full-Text
Keywords: adaptation; adaptive capacity; agroecosystem; climate change; innovation platforms; livelihood; resilience; vulnerability adaptation; adaptive capacity; agroecosystem; climate change; innovation platforms; livelihood; resilience; vulnerability
►▼ Show Figures 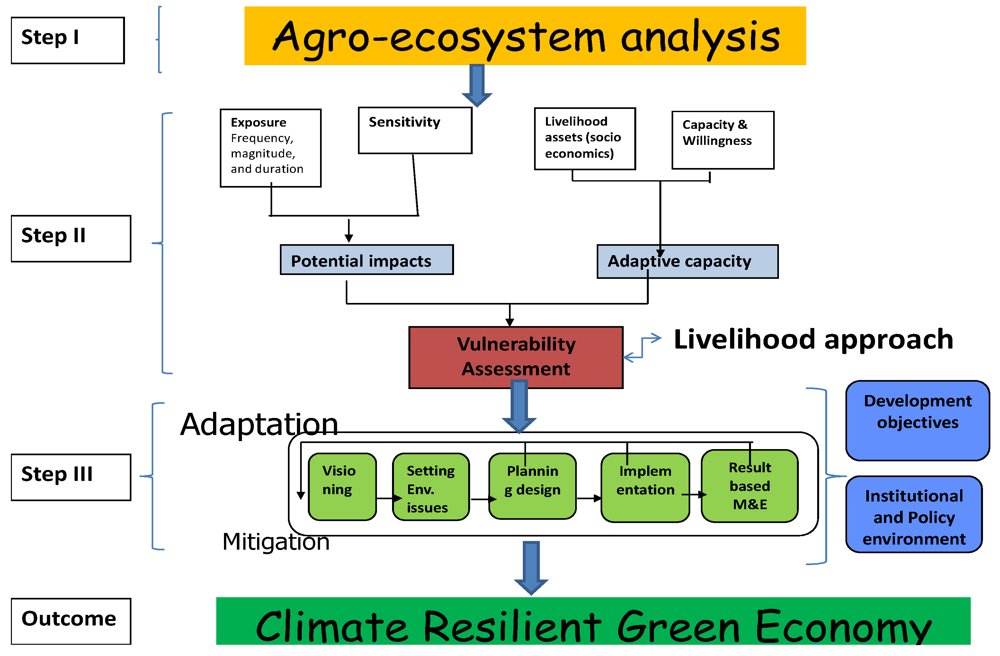