Nutritional Rehabilitation of HIV-Exposed Infants in Malawi: Results from the Drug Resources Enhancement Against AIDS and Malnutrition Program

Child Acute Malnutrition and Mortality in Populations Affected by Displacement in the Horn of Africa, 1997–2009

Drought and conflict in the Horn of Africa are causing population displacement, increasing risks of child mortality and malnutrition. Humanitarian agencies are trying to mitigate the impact, with limited resources. Data from previous years may help guide decisions. Trends in different populations affected by displacement (1997–2009) were analyzed to investigate: (1) how elevated malnutrition and mortality were among displaced compared to host populations; (2) whether the mortality/malnutrition relation changed through time; and (3) how useful is malnutrition in identifying high mortality situations. Under-five mortality rates (usually from 90-day recall, as deaths/10,000/day: U5MR) and global acute malnutrition (wasting prevalences, < −2SDs of references plus edema: GAM) were extracted from reports of 1,175 surveys carried out between 1997–2009 in the Horn of Africa; these outcome indicators were analyzed by livelihood (pastoral, agricultural) and by displacement status (refugee/internally displaced, local resident/host population, mixed); associations between these indicators were examined, stratifying by status. Patterns of GAM and U5MR plotted over time by country and livelihood clarified trends and showed substantial correspondence. Over the period GAM was steady but U5MR generally fell by nearly half. Average U5MR was similar overall between displaced and local residents. GAM was double on average for pastoralists compared with agriculturalists (17% vs. 8%), but was not different between displaced and local populations. Agricultural populations showed increased U5MR when displaced, in contrast to pastoralist. U5MR rose sharply with increasing GAM, at different GAM thresholds depending on livelihood. Higher GAM cut-points for pastoralists than agriculturalists would better predict elevated U5MR (1/10,000/day) or emergency levels (2/10,000/day) in the Horn of Africa; cut-points of 20–25% GAM in pastoral populations and 10–15% GAM in agriculturalists are suggested. The GAM cut-points in current use do not vary by livelihood, and this needs to be changed, tailoring cut points to livelihood groups, to better identify priorities for intervention. This could help to prioritize limited resources in the current situation of food insecurity and save lives. View Full-Text
Keywords: malnutrition; refugees; humanitarian assistance; Africa; drought malnutrition; refugees; humanitarian assistance; Africa; drought
►▼ Show Figures 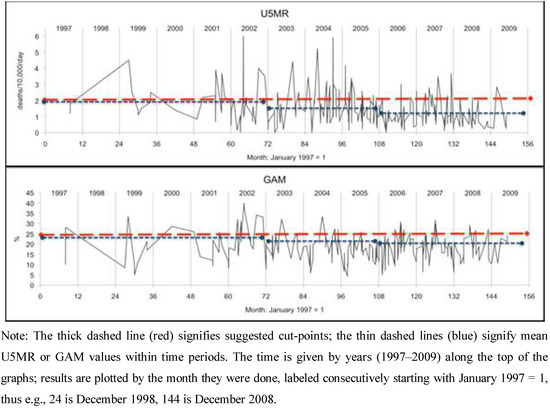