Tobacco Addiction and Smoking Status in Heroin Addicts under Methadone vs. Buprenorphine Therapy
Next Article in Special Issue

Social Aspects of Suicidal Behavior and Prevention in Early Life: A Review
Previous Article in Journal

Patterns of Suicide and Other Trespassing Fatalities on State-Owned Railways in Greater Stockholm; Implications for Prevention

Suicide Mortality in Comparison to Traffic Accidents and Homicides as Causes of Unnatural Death. An Analysis of 14,441 Cases in Germany in the Year 2010

Aim: To assess suicide mortality in comparison to traffic accidents and homicide deaths in Germany in the year 2010 and to compare years of life lost (YLL) due to these unnatural deaths. Methods: Mortality data were provided by the Federal Statistical Office giving death rates (related to 100,000 inhabitants) and proportions (related to 100 deaths of individuals) for suicide, traffic accidents and homicide as well as YLL data. Results: A total of 14,441 unnatural deaths (suicide, traffic accidents, homicide) were reported in 2010 in Germany. Of those, 10,021 subjects (69.4%) committed suicide, 3,942 (27.3%) died in traffic accidents, 478 (3.3%) were murdered. Suicide death rates were by far the highest, with rates for men (18.6) three times higher than for women (6.1). For both sexes, suicide rates increased with age, whereas suicide as a proportion of all causes of death was higher in younger age groups. In both sexes, suicide was the leading cause of YLL (men: 314 YLL, women: 90 YLL). Conclusions: Suicide is the leading cause of unnatural death and YLL. The sex- and age- specific patterns in suicide mortality call for different action plans to target high risk groups. View Full-Text
Keywords: unnatural death; suicide; traffic accidents; homicide; years of life lost; Germany; suicide prevention unnatural death; suicide; traffic accidents; homicide; years of life lost; Germany; suicide prevention
►▼ Show Figures 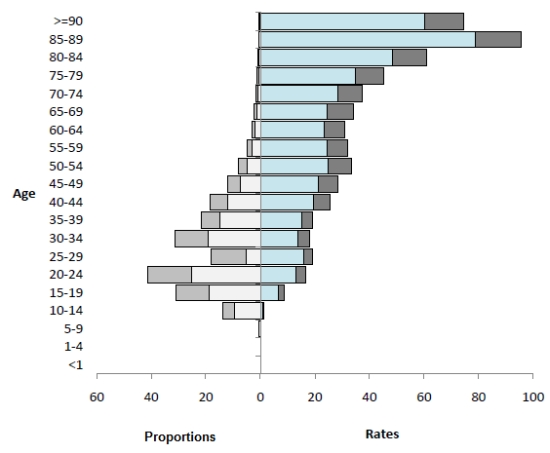 
Lukaschek, Karoline, Natalia Erazo, Jens Baumert, and Karl-Heinz Ladwig. 2012. "Suicide Mortality in Comparison to Traffic Accidents and Homicides as Causes of Unnatural Death. An Analysis of 14,441 Cases in Germany in the Year 2010" International Journal of Environmental Research and Public Health 9, no. 3: 924-931. https://0-doi-org.brum.beds.ac.uk/10.3390/ijerph9030924