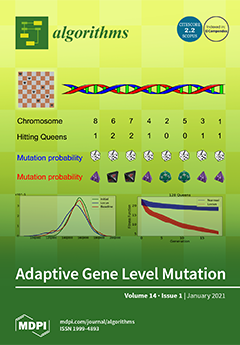 Cover Story (view full-size image): Our method, which is called Locus mutation, is a gene-dependent local mutation operator where every gene has a different mutation rate induced from its partial fitness value. A certain set of problems are partially solvable, allowing us to grade segments of a solution individually, which results in the local and individual tuning of mutation parameters for genes. In these cases, our approach can speed up the convergence of the algorithm and yield a more accurate final solution, which we have demonstrated on the N-Queens and traveling salesman problems. Our approach extends the traditional mutation operator by introducing an extra parameter that yields the traditional approach if it is set to zero or balances the exploitation–exploration ratio with non-zero values. View this paper.
Previous Issue
Volume 13, December
Next Issue
Volume 14, February
We use cookies on our website to ensure you get the best experience. Read more about our cookies here.
Accept
We have just recently launched a new version of our website. Help us to further improve by taking part in this short 5 minute survey here. here.
Never show this again