The time-dependent traveling salesman problem (TDTSP) asks for a shortest Hamiltonian tour in a directed graph where (asymmetric) arc-costs depend on the time the arc is entered. With traffic data abundantly available, methods to optimize routes with respect to time-dependent travel times are widely desired. This holds in particular for the traveling salesman problem, which is a corner stone of logistic planning. In this paper, we devise column-generation-based IP methods to solve the TDTSP in full generality, both for arc- and path-based formulations. The algorithmic key is a time-dependent shortest path problem, which arises from the pricing problem of the column generation and is of independent interest—namely, to find paths in a time-expanded graph that are acyclic in the underlying (non-expanded) graph. As this problem is computationally too costly, we price over the set of paths that contain no cycles of length k. In addition, we devise—tailored for the TDTSP—several families of valid inequalities, primal heuristics, a propagation method, and a branching rule. Combining these with the time-dependent shortest path pricing we provide—to our knowledge—the first elaborate method to solve the TDTSP in general and with fully general time-dependence. We also provide for results on complexity and approximability of the TDTSP. In computational experiments on randomly generated instances, we are able to solve the large majority of small instances (20 nodes) to optimality, while closing about two thirds of the remaining gap of the large instances (40 nodes) after one hour of computation. View Full-Text
Keywords: integer programming; traveling salesman problem; shortest path problem integer programming; traveling salesman problem; shortest path problem
►▼ Show Figures 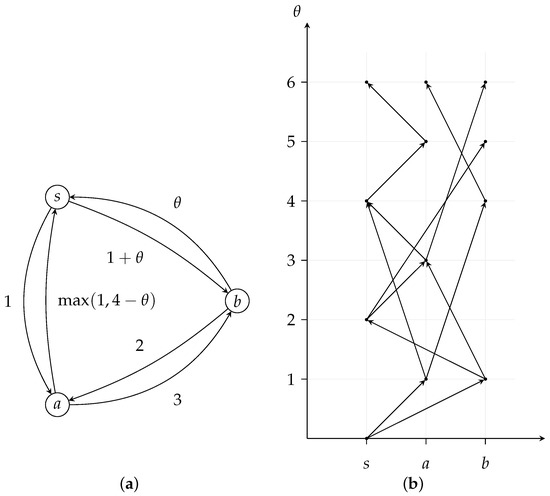