From Enumerating to Generating: A Linear Time Algorithm for Generating 2D Lattice Paths with a Given Number of Turns
Previous Article in Journal

Given a set of data points x1,…,xn and some notion of similarity sij ≥ 0 between all pairs of data points xi and xj, the intuitive goal of clustering is to divide the data points into several groups, so that points in the same group are similar and points in different groups are dissimilar to each other. If we do not have more information than similarities between data points, a nice way of representing the data is in the form of the similarity graph G = (V,E). Each vertex vi in this graph represents a data point xi. Two vertices are connected if the similarity sijbetween the corresponding data points xiand xj is positive or larger than a certain threshold and the edge is weighted by sij. The problem of clustering can now be reformulated by using the similarity graph: we want to find a partition of the graph so that the edges between different groups have very low weights and the edges within a group have high weights.
The goal of constructing similarity graphs is to model the local neighborhood relationships between the data points. As far as we know, the Gaussian kernel function is still an important construction method; and the important feature of the Gaussian kernel function is that the construction form is based on the Gaussian kernel model, which can be defined as Equation (1).

Where, the d(i,j) is the Euclidean distance between xi and xj, and σ is the kernel parameter, which is a fixed parameter and cannot vary with the change of the surroundings. Zelnik-Manor et al. proposed a local scale parameter σi for each point to replace the fixed parameter σ[14], which allows the similarity self-tuning capability. Usually, σi = d(xi, xm), where xm is the m-th closest neighbor of the point xi, and the similarity function is defined as Equation (2).

Li et al. assumed that vertexes in the same manifold have a higher similarity and a higher local density region than those in different manifolds. They used the number of the shared nearest neighbors to characterize the similarity between vertex xi and xj [15]. The construct similarity function is defined as Equation (4).

According to this method, the similarity between two vertexes is higher if there are more common shared nearest neighbors. Due to the non-homogeneity of the network topology, the importance of each node in the network is different, and the similarity of two vertices relates to not only the number of neighbors shared, but also closely to the importance of the shared neighbor vertices.

3. Similarity Matrix Based on the Importance of Shared Nearest Neighbors

3.1. The Importance of Node

Some efficient web searching engines are often based on the idea of characterizing the most important vertices in a graph representing the connections or links between pages on the web, such as Google. Because the linkages between pages can be interpreted as interrelated and mutually supportive between pages, the importance of a page can be determined according to the linkages. Kleinberg et al. proposed a similar method to identify in a set of pages relevant to a query search the subset of pages that are good hubs or the subset of pages that are good authorities [17]. Good hubs are pages that point to good authorities, and good authorities are pages that are pointed to by good hubs. From these implicit relations, Kleinberg derived an iterative method that assigns an “authority score” and a “hub score” to every vertex of a given graph.
Given a graph G = (V,E) with vertex set V and with edge set E, let hi and ai be the hub and authority scores of vertex i. The hub score of vertex i is set equal to the sum of the authority scores of all vertices pointed to by i, and similarly, the authority score of vertex i is the set equal to the sum of the hub scores of all vertices pointing to i. The scores of hi and ai can be calculated as Equation (5).

Let these scores be initialized by some positive values and then update them simultaneously for all vertices; the “authority score” and “hub score” can be obtained as a limit of a converging iterative process according to Equation (6):

Where, B is the matrix whose entry (i,j) is equal to the number of edges between the vertices i and j in G (the adjacency matrix of G). Blondel et al. has proven that in the initial condition

; Equation (4) will converge when the number of iterations is odd or even times, respectively [16]. When getting the “authority score” and a “hub score” for every vertex, the score of vertex importance can be calculated as Im = (h+a). Obviously, the importance of one vertex is related to the vertex’s out-degree, in-degree and neighboring vertexes’ importance, to represent the structure and properties characteristics of the network. Similarly, we can utilize the score of vertex importance to construct a similarity matrix in graph G.

3.2. Similarity Matrix Based on the Importance of Shared Nearest Neighbors

Table 1. The algorithm of similarity matrix based on the importance of shared nearest neighbors.

Table 2. Adaptive spectral clustering algorithm based on the importance of shared nearest neighbors.

Given a dataset with n samples, clustering is classified as a relationship between samples; the samples are divided into the same clusters, or different clusters. In following experiments, we adopt the adjusted Rand index (ARI) as the performance metric.
The adjusted Rand index assumes the generalized hyper geometric distribution as the model of randomness, i.e., the different partitions of the objects are picked at random, such that the number of objects in the partitions to compare is fixed. The general form of ARI can be simplified as Equation (10). Where, the nij is the number of objects that are both in different partitions; the ni and nj are the number of objects in different clusters, respectively. The ARI can take on a wider range of values between zero and one, with the increasing sensitivity of the index.

As shown in Figure 1, six synthetic datasets [20] with different structure are used in the experiments, and the results are shown in Table 3. 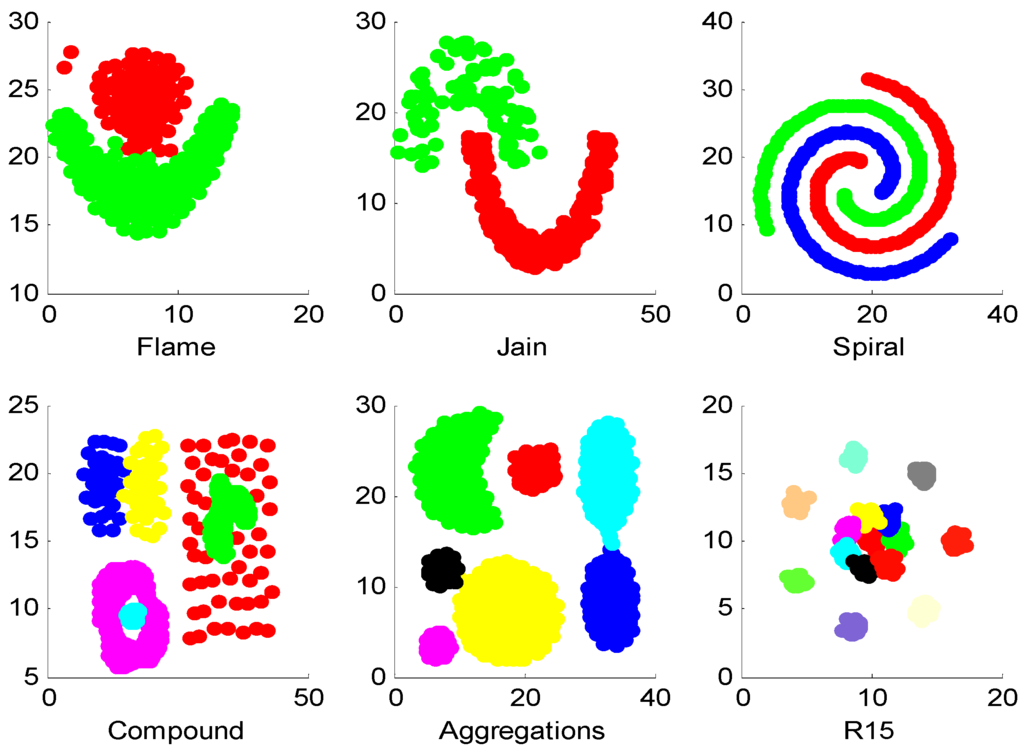 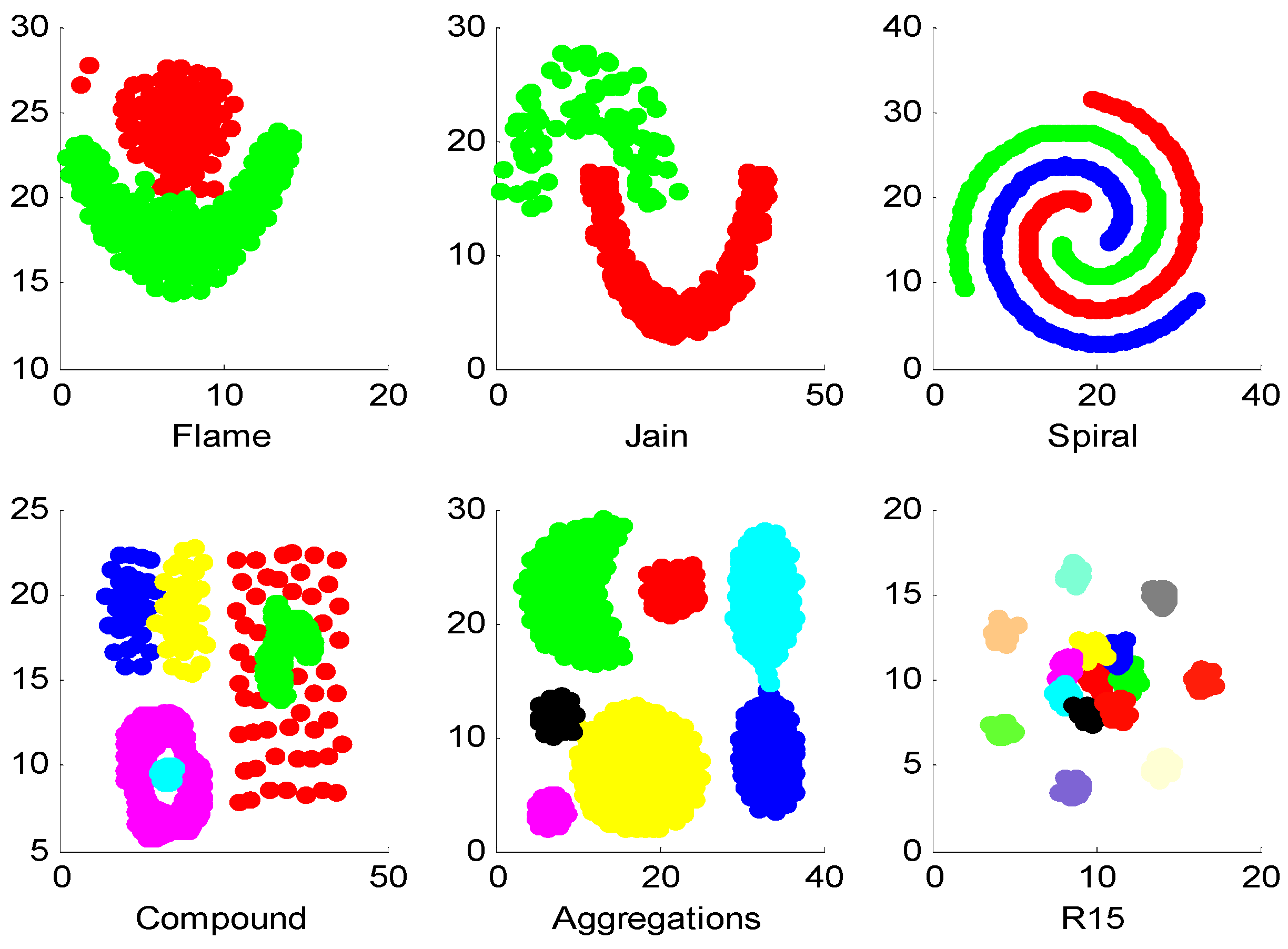 This example is used to test the ability of identifying different structures on synthetic datasets. In Table 3, the average value is used to show the average performance of algorithms on different datasets, and the best value is marked by boldface. It can be seen from the Table 3 that SSC, SNNSC and SNNISC get similar results on all the datasets (about 97%, except on the forth dataset), which indicates that the proposed similarity measure can effectively identify different synthetic datasets.

To test the performance of SNNISC further, eight real-word datasets are adopted from UCI datasets about classification and clustering [21,22,23,24,25,26,27,28,29], and the results are shown in Table 4. From the boldface in the Table 4, we observe that the clustering performance of SNNISC is superior to SSC and SNNSC on four datasets in addition to “Breast Tissue” and “Data Bank”. In particular, for the dataset “Iris”, one cluster is linearly separable from the other two nonlinearly clusters, which is challenging for clustering algorithms. Although the ARI value of SSC and SNNSC can reach to about 83%, SNNISC can achieve 92%. On dataset “Seeds”, SNNISC, SNNSC and SSC get the same ARI value (71%).
On dataset “Glass”, the ARI value of SNNISC (24%) is less than SSC (27%), but better than SNNSC (23%). Meanwhile, it can be found that SNNISC is more stable, which is just less than the best result between 0.2%~0.3%.Therefore, we conclude that the SNNISC can improve the performance of the spectral clustering algorithm.

Table 4. The results of ARI on the UCI Machine Learning Repository.

The MNIST dataset of handwritten digits [30] contains 10 digits with a total of 50,000 examples (Figure 2). Every example is a 28 × 28 grayscale image, and the dimension is 784. To obtain a comparable result, in our experiments, the first 900 examples are used. Each pair of the digits is used for clustering, with a total of 45 tests. Figure3 shows the results. The mean value and standard deviation of ARIs of different methods on the 45 tests are shown in Table 5.
From Figure 3, we observe that SNNISC and SNNSC get a similar ARI value in some tests, but in most cases (about 73% of tests), SNNISC is superior to SNNSC and SSC. From Table 5, we find that the mean value of SNNISC (74%) is better than SNNSC (73%) and SSC (59%), and the standard deviation of SNNISC (23%) is less than SNNSC (24%) and SSC (28%). This shows that the proposed method has the best performance and is robust for most data. 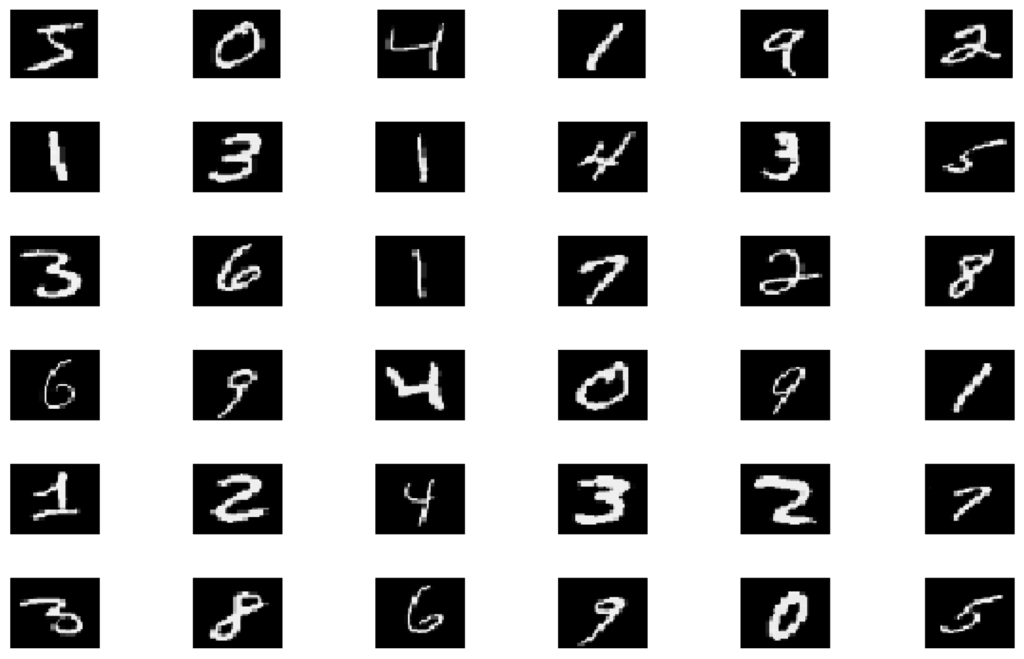 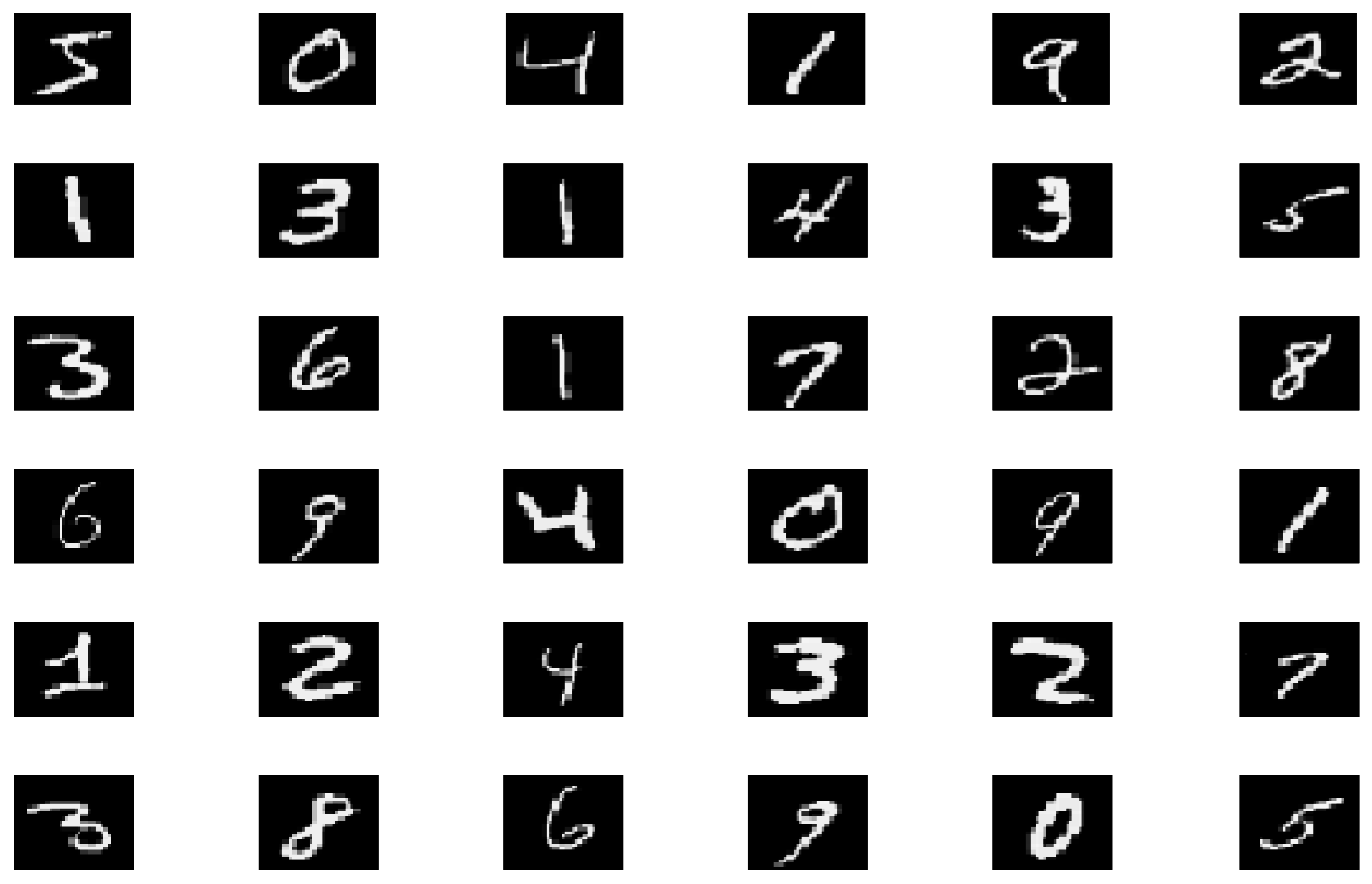 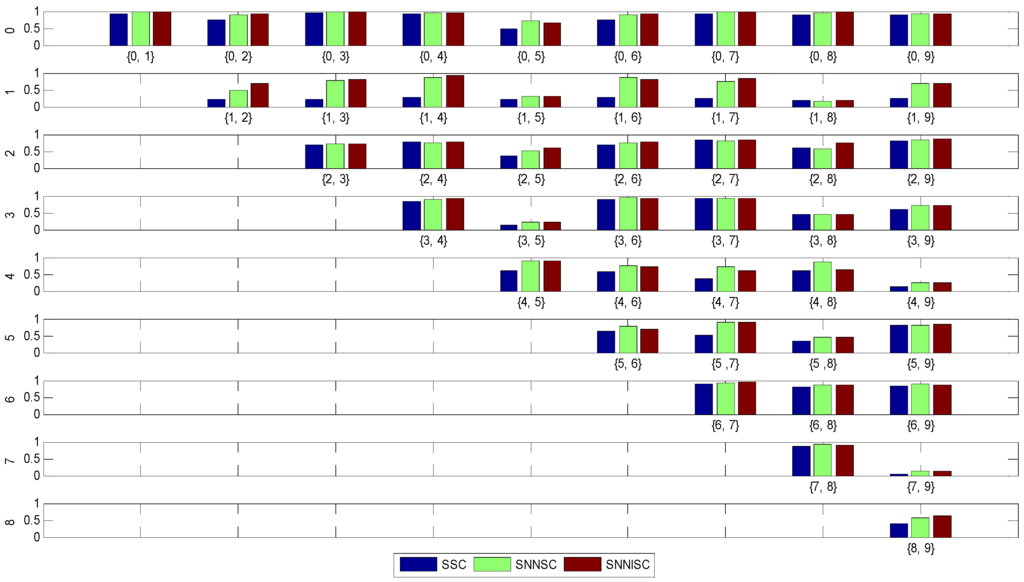 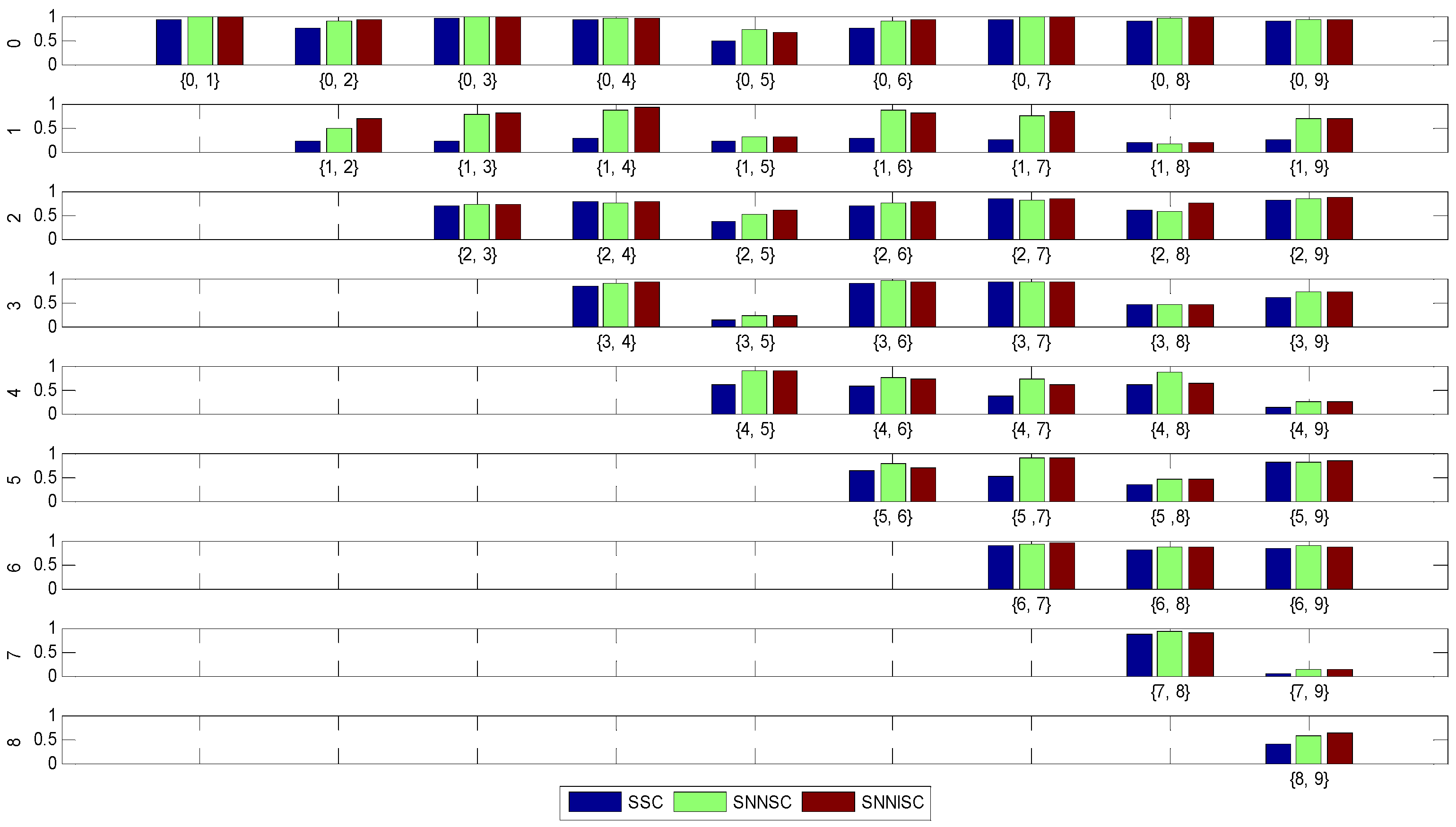 The work presented here was carried out in collaboration between all authors. Xiaoqi He designed the methods, and Yangguang Liu defined the research theme. Sheng Zhang carried out experiments, analyzed the data and interpreted the results. Yangguang Liu provided suggestions and comments on the manuscript and polished up the language in the paper. All authors have contributed to reading and approved the manuscript.