A Quartically Convergent Jarratt-Type Method for Nonlinear System of Equations

In recent years, various high-precision applications have been produced and applied to prompt the micro/nano-technology to develop rapidly, such as adjustable posture institution of microwave antenna, scanning tunnel microscopy, bionic mechanism, micro-gripper, etc. [1,2,3,4,5]. A compliant mechanism with flexure hinges is regarded as one of the best and has been implemented in these fields due to its incomparable merits including no friction, lubrication and backlash, reduced weight, low clearance, and being easy to manufacture, integrally. For specific micro-technology applications, the micro-manipulator should have the ability to amplify the output displacement of lead zironcate titanate (PZT) in order to meet the actual requirements [6,7].
In the literature, research results have been published on every aspect of the compliant mechanism. Some works are dedicated to the design and verification of the mechanical configurations. A flexure-based compliant mechanism with three degrees of freedom (3-DOF) is presented in [8]. A parallel compliant mechanism with two axis linear motion, for ultra-precise motion, is designed in [9]. By employing flexure hinges, a micro manipulator with six degrees of freedom (6-DOF) as a fiber optics aligner is presented in [10]. The design of an XY novel flexure-based stage is proposed in [11] with high placement precision. A compliant stage with high scanning speed and a relatively large range is presented in [12]. A novel parallel-kinematic XY micro-positioning system is designed with the characteristics of a large range of motion in [13]. Another flexure-based parallel manipulator is designed with 3-DOF motion in [14].
Some researchers are focused on the quasi-static properties of the micro-manipulator. An analytical model for a classic compliant mechanism is proposed in [15]; by using this model the amplification ratio, input and output stiffness can be calculated. Another mathematical model is proposed in [16] to calculate the amplification ratio by using kinematic theory and elastic beam theory. A similar work is presented in [17]; the authors discuss several previously established models and set an improved analytical model based on Euler-Bernoulli beam theory, but the result does not match well with that of FEA. The matrix method for investigating the compliant mechanism is presented in [18,19]. The authors in [20] designed a micro-manipulator, with multi-lever and flexure hinges, and proposed equations to assess the properties of the mechanism. A two-step amplifier is designed in [21], and Lagrange’s equation is used to calculate its performance. On the other hand, researchers are also interested in the approaches to build the stiffness analytical equations of flexure hinges. The spatial stiffness matrix is built in [22] by using the finite element method. The regular circular hinge is regarded as a beam element with three nodes in [23] for the purpose of enhancing the calculation accuracy. In [24], the flexure hinge is taken as a varied cross-section in-plane beam element with two nodes. A similar work is presented in [25]; a high-order Hermite multinomial is utilized to build shape functions of three nodes of a non-prismatic beam element. The authors in [26] presented the exact shape functions through the governing differential equations, but this method has narrow application scope.
To better acquire the satisfactory comprehensive performance of the mechanism, the studies of multi-objective optimization have been introduced to solve this problem. A hybrid technique based on differential evolution algorithms is introduced to solve multi-pass turning optimization problems in [27]. In [28], a new particle swarm-based optimization method is employed to optimize vehicle crashworthiness. A new hybrid optimization approach, based on the particle swarm optimization algorithm and receptor-editing properties of immune systems, seeks to solve problems in both design and manufacturing areas in [29]. In [30], an optimization algorithm called “cuckoo search algorithm” is adopted for solving manufacturing optimization problems. In [31], the paper firstly developed a mathematical model and then, combined with a multi-objective genetic algorithm, the researchers obtain the optimal design parameters of the plant. After established an analytical model, a multi-objective optimization method is employed to search for the optimal solution in [32].
The aim of this paper is to propose both of the quasi-static calculation model and the dynamic calculation model for assessing the micro-mechanism properties. Firstly, according to the theory of statically indeterminate structure, the uncanonical linear homogeneous equations are built to obtain the amplification ratio and input stiffness of the manipulator. Then, the modal analysis is carried out by the analytical dynamic model. Finally, based on these two tested theoretical models, the multi-objective optimization design is performed to improve the micro-manipulator performance.

The main component parts of the classic monolithic micro-manipulator are eight regular, circular flexure hinges. As shown in Figure 1a, the displacement loads and all of the hinges and levers are symmetric, and a 1/2 model is separated as the analytical objective, as shown in Figure 1b.

It can be seen in Figure 1b that the normal force, X1, and bending moment, X2, will be considered as the redundant forces. The input force, X3, that is produced by the PZT is not a given force and the vertical displacement of the edge point of the 1/2 model would be considered. Combining above conditions and constrains, the uncanonical equations of the 1/2 model are established as: where and are the varied input displacement output load and the displacement of the manipulator, respectively. is defined as the corresponding displacement and can be obtained as follows: where and can be obtained by bending moment expressions. is given by:
According to Equation (1), the displacement ratio R and the input stiffness Kin can be expressed as:

When the micro-manipulator is applied in the specific applications, the resonance frequency of the mechanism should be considered. On the other hand, according to the transmission principle of the classic manipulator, there are eccentric distances among some nodes. The improved analytical model is established by using the Energy principle and Hamilton principle, consequently.

The Lagrange functional is written, combining with the displacement constraints of the nodes, as follows: Where is the Lagrangian multiplier, and the variational expression can be given:
Considering the condition that: and Equation (7) is rewritten as follows:
Eliminating the right part of Equation (9), the free vibration expression is derived as: where M and K are the total mass matrix and stiffness matrix respectively, which can be obtained by the finite element method, and the matrix C is consist of multipoint constraint equations.

3.2 The Derivation of Matrix C

Eliminating the degrees freedom of the rigid body q1, q2 and q3, we can obtain three equations as:
The same procedure can be performed to obtain another group of constraint equations, as shown in Figure 2b:

Parametric studies of analytical models have been carried out to investigate the influences of key design parameters on the mechanical amplifier performances, respectively [33]. On the other hand, considering this micro-manipulator may be used in some special applications, it is necessary to coordinate and compromise these major design objectives such as displacement ratio, R, input stiffness, Kin, natural frequency, f, the mass, T and the max stress, σ, due to their complicated, variable and nonlinear relationships.
When the output displacement produced by the PZT is 0.05 mm, the changing scopes of the cross section height, t, and the radius of the flexure hinge, r, are 0.3–0.9 mm and 2.2–4.5 mm respectively, the relationships of displacement ratio, input stiffness max stress and the first frequency are shown in Figure 3. From Figure 3a, one can find that the input stiffness, Kin, and the max stress, σ, is a nonlinear relationship along with the ratio, R, changes. For small values of the ratio, R, the σ increases slowly when Kin increases, but when R changes from 0.55 to 0.65 mm, it is noted that the σ increases first and then decreases. In Figure 3b, one can see that the frequency f sharp increases along with the stiffness, Kin, increases, but it has an inconspicuous change with the ratio, R. That means the objective, f, is more sensitive to the changes in the stiffness, Kin. The similar analysis processes can be carried out with another group of design parameters. When lx changes from 6 to 16 mm and ly changes from 2.2 to 2.9 mm, the relationships among these design objectives are different compared with the first group. From Figure 4a, it can be observed that the most significant change is the relationship between σ and ratio R, and the frequency, f, is less sensitive to the changes in other objectives from Figure 4b. Besides, the Kin decreases in 0.25–0.6 N/μm along with lx and ly changes, this means that the ratio, R, and Kin are more sensitive to the second parameter group.

It can be observed that the multi-objective optimization of the mechanical amplifier is complicated. In this case, the greater the displacement ratio, R, the better. For a given PZT, the output displacement is 0.01 mm and its stiffness, KPZT, has been determined; therefore the input stiffness, Kin needs to be smaller than KPZT. One also desires that the fundamental frequency, f, is greater and the mass, T, is smaller. Consequently this model can be described as:
Max: R, Kin, f
Min:
Subject to:
There are other kinds of optimization algorithms with respect to the multi-objective optimization problem. In this paper, non-dominated sorting genetic algorithm II (NSGA-II) is employed to solve this problem. The population size is 36, the number of generations is 30, crossover probability is 0.9, crossover distribution is 10, and mutation distribution is 20, the optimized dimensions are: lED = 25.51 mm, lx = 15.71 mm, ly = 2.58 mm, r = 3.92 mm, and t = 0.96 mm, which result in this micro-manipulator with R = 14.85, f = 110.72 Hz, Kin = 11.61 N/μm, and T = 1.19E−4 kg as previously predicted by the analytical models. Figure 5 shows the game relationships among different optimal objectives. 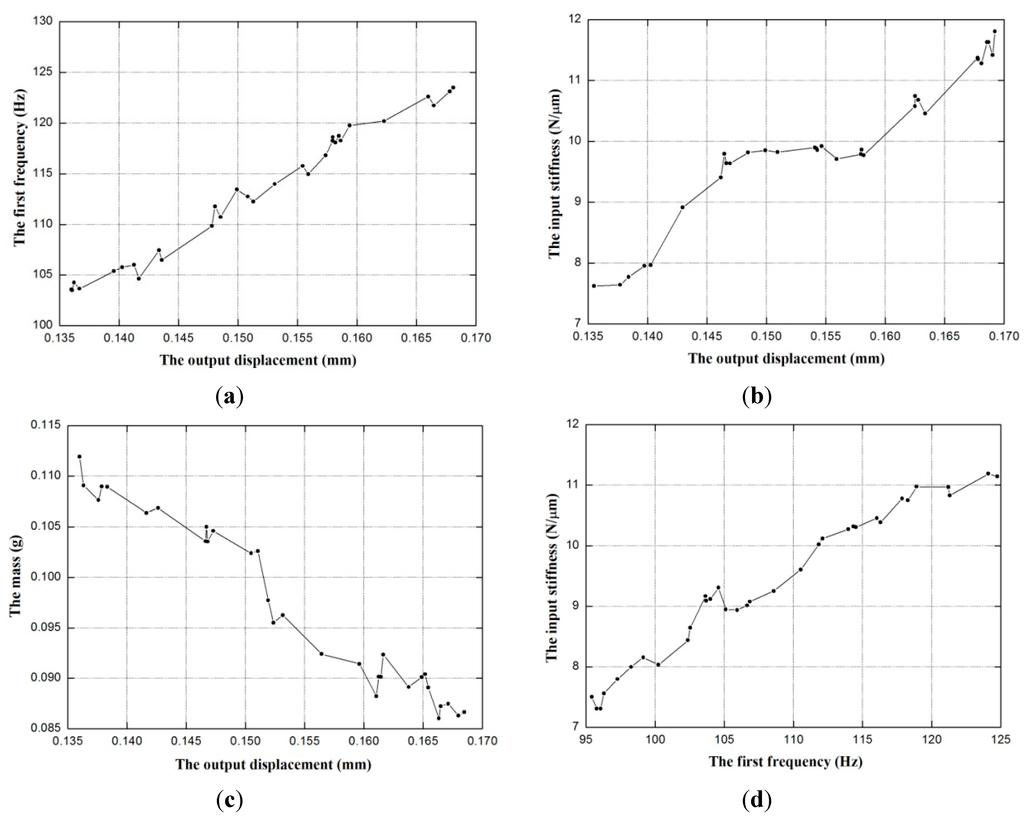 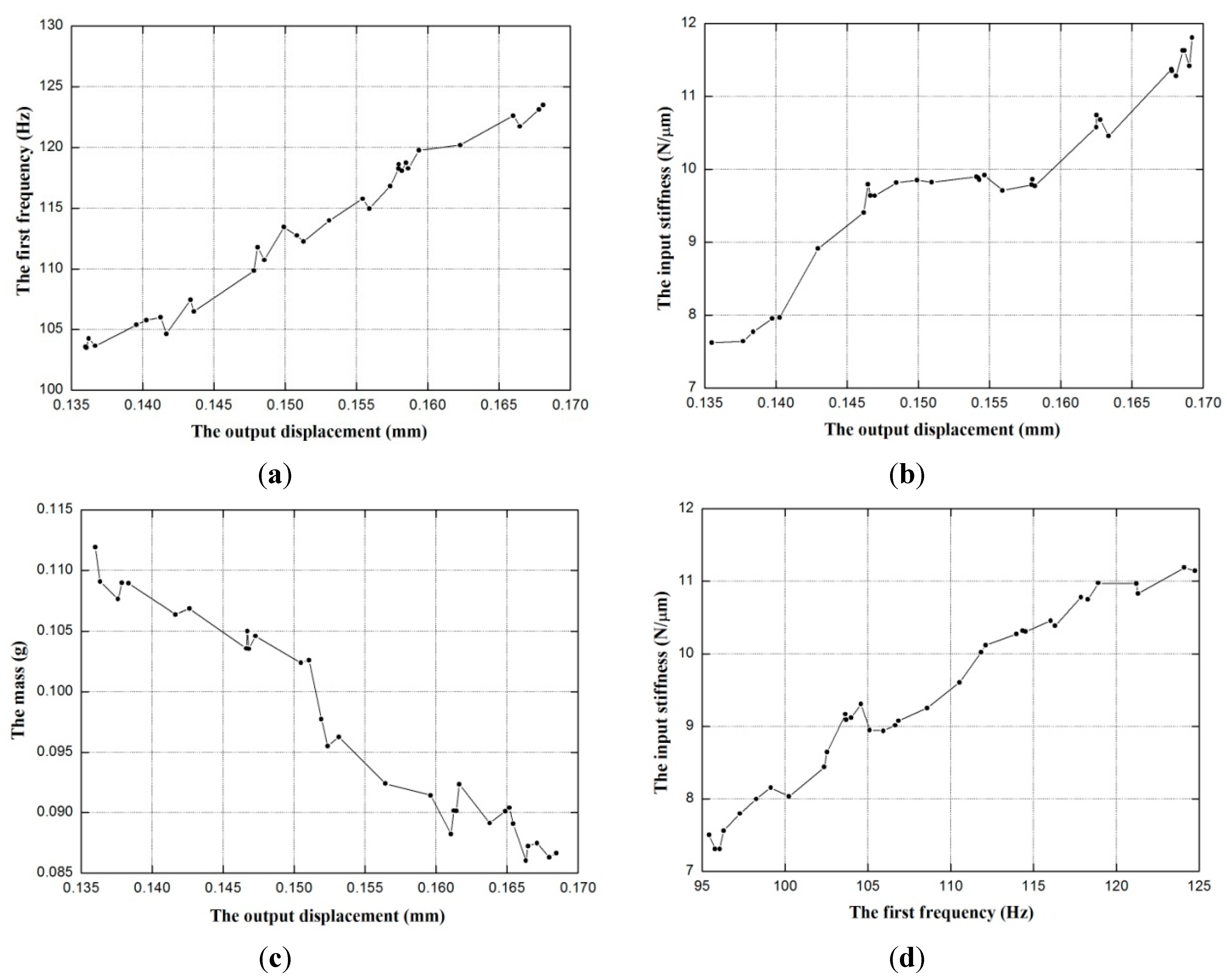 Yuan Ni organized and supervised the main research of the study. Zongquan Deng and Xiang Wu were also responsible for conceiving and designing the simulation analysis. Junbao Li and Long Li contributed the details of the algorithms.