It is generally hypothesized that forest dieback is a characteristic of alder swamp forests (alder carrs, Alnion glutinosae alliance). Different internal and external factors may trigger this process, including human disturbance, changes in river discharge, unusually severe and prolonged flooding, terminal age of an even-aged alder forest (ca. 100–150 years) and others. Although forest dieback in this type of forest may cause major changes in environmental conditions, the influence of this change on the floristic composition has not been well recognized. The study aimed to detect any possible changes in floristic variation in alder swamp forest following forest dieback. Vegetation plots in alder swamp forests affected by forest dieback were resurveyed 20 years after a previous study. PERMANOVA was used to test the significance of the compositional change and nonmetric multidimensional scaling (NMDS) with passively fitted means of the Ellenberg’s Indicator Values were used to interpret its ecological meaning. In addition, different structural and diversity indices were compared, including species richness, percentage cover of vegetation layers, Shannon and Simpson diversity and evenness. Finally, we analyzed changes in the frequency of vascular plant species using Chi square tests. We recorded clear and significant compositional changes following alder swamp forest dieback. This change was most related to the gradient of moisture, followed by the gradients of light and temperature. The analysis of the individual species showed that the species of hummocks declined, while the species of hollows increased. Moreover, the current communities are dominated by some hydrophytes that were not recorded 20 years ago. Forest dieback resulted in profound changes in the hydrological regime. The observed changes are consistent with a model of cyclic succession as proposed for alder swamps. In addition, we conclude that the natural forest dynamics have to be taken into consideration while interpreting the results of re-survey studies. View Full-Text
Keywords: alder swamp forest; alder carr; swamp woodland; Alnion glutinosae; Alnetea glutinosae; Alnus glutinosa; forest dieback; forest dynamic; cyclic succession; vegetation resurvey alder swamp forest; alder carr; swamp woodland; Alnion glutinosae; Alnetea glutinosae; Alnus glutinosa; forest dieback; forest dynamic; cyclic succession; vegetation resurvey
►▼ Show Figures 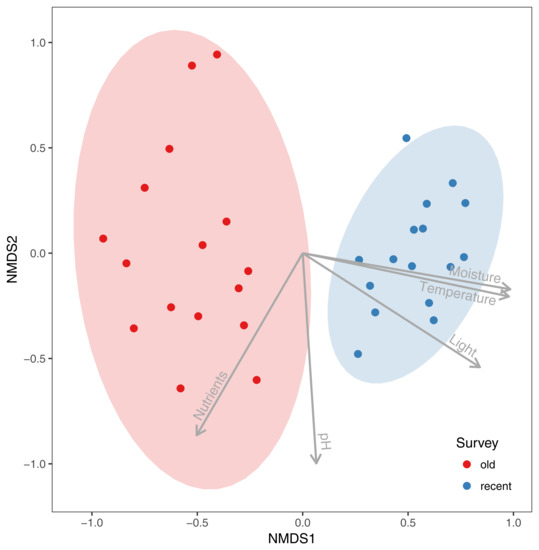