Feline Infectious Peritonitis as a Systemic Inflammatory Disease: Contribution of Liver and Heart to the Pathogenesis
Previous Article in Journal

Bacteriophages of the significant veterinary pathogen Staphylococcus pseudintermedius are rarely described morphologically and genomically in detail, and mostly include phages of the Siphoviridae family. There is currently no taxonomical classification for phages of this bacterial species. Here we describe a new phage designated vB_SpsS_QT1, which is related to phage 2638A originally described as a Staphylococcus aureus phage. Propagating strain S. aureus 2854 of the latter was reclassified by rpoB gene sequencing as S. pseudintermedius 2854 in this work. Both phages have a narrow but different host range determined on 54 strains. Morphologically, both of them belong to the family Siphoviridae, share the B1 morphotype, and differ from other staphylococcal phage genera by a single long fibre at the terminus of the tail. The complete genome of phage vB_SpsS_QT1 was sequenced with the IonTorrent platform and expertly annotated. Its linear genome with cohesive ends is 43,029 bp long and encodes 60 predicted genes with the typical modular structure of staphylococcal siphophages. A global alignment found the genomes of vB_SpsS_QT1 and 2638A to share 84% nucleotide identity, but they have no significant similarity of nucleotide sequences with other phage genomes available in public databases. Based on the morphological, phylogenetic, and genomic analyses, a novel genus Fibralongavirus in the family Siphoviridae is described with phage species vB_SpsS_QT1 and 2638A. View Full-Text
Keywords: bacteriophages; Staphylococcus pseudintermedius; viral taxonomy; Siphoviridae; comparative genomics bacteriophages; Staphylococcus pseudintermedius; viral taxonomy; Siphoviridae; comparative genomics
►▼ Show Figures 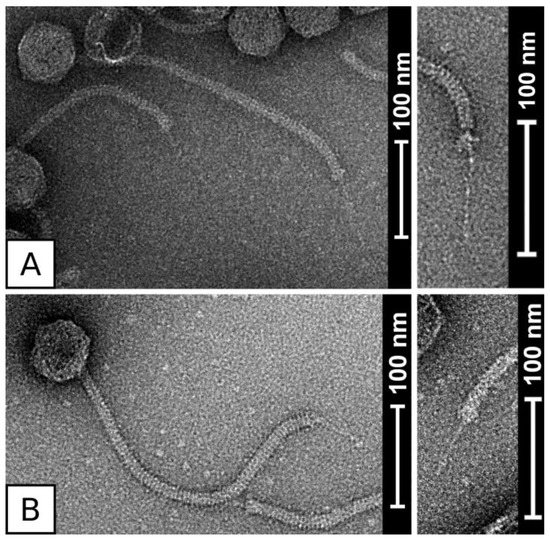