Impact of Abiotic Stresses on Plant Virus Transmission by Aphids

All experiments were carried out with melon, Cucumis melo var. Gold Express (Syngenta Seeds Inc., Greensboro, NC, USA), germinated in seed flats in a climate-controlled growth chamber (25 ± 1 °C, 65% relative humidity) under a 16 h light/8 h dark photoperiod. One and a half weeks after sowing, seedlings were transplanted to 6 inch diameter × 5.75 inch tall round pots (Kord Regal Standard Pots, Greenhouse Megastore, West Sacramento, CA, USA) and moved to the greenhouse, where natural light and supplemental fluorescent shop lights provided a 16 h light/8 h dark photoperiod. Plants were kept in BugDorm insect rearing tents for the duration of experiments.
The isolate of CYSDV used for all experiments was collected in 2006 from a commercial melon field in Imperial County, CA, and, thus, is known as the Imperial Isolate [16]. It is maintained in live melon in the UC Riverside Insectary and Quarantine facility greenhouse and transmitted to new melon seedlings monthly, using the whitefly vector B. tabaci. All experiments involving CMV were performed with isolate KV-PG2, originally collected in 2009 from a field of cultivated squash in Kampsville, IL, USA [25]. Frozen infected melon tissue generated from one cohort of melon plants grown in January 2019 was used for all CMV inoculations in this study.
The Bemisia tabaci MEAM1 (formerly biotype B) colony used for this study originated from whiteflies collected in 2006 from cotton at the Maricopa Agricultural Center, Maricopa, AZ, USA [38]. All whiteflies used in this study were sourced from colonies maintained on cowpea (Vigna unguiculata) under climate-controlled conditions of 25 ± 1 °C and a 16 h light/8 h dark photoperiod. In addition to the primary bacterial endosymbiont Portiera aleyrodidarum, the secondary endosymbiont Rickettsia sp. nr. bellii is fixed in this laboratory colony.
The Aphis gossypii colony used for this study originated from aphids collected from squash near Reedley, CA about a decade ago and reared on melon since then [39]. All aphids used here were reared on melon in the laboratory under climate-controlled conditions of 24 ± 2 °C and supplemental LED lighting providing a 16 h light/8 h dark photoperiod.

Four days after foliar treatments were applied, we used viruliferous B. tabaci to inoculate melon seedlings with CYSDV (Figure 1A). Cohorts of 50–75 B. tabaci had previously been placed in clip cages on symptomatic leaves of CYSDV-infected melon plants for a 48 h virus acquisition period. The whiteflies were then released in BugDorms containing melon seedlings at the 1–2 true leaf stage and allowed to feed for 48 h before being removed. For mock inoculations, the same number of non-viruliferous whiteflies were allowed to feed on control plants at the same stage of development and removed after 48 h.

2.4. Detection of Viruses and Estimation of Titer

We released insect vectors in the middle of the bottom of a clear, rectangular cuboid arena surrounded by white poster board and centered under LED lights (Figure 1B). One plant from each of the four treatment groups was placed randomly outside each corner of the arena, and one leaf of the same age from each plant was pushed through a slit into the arena. The slit was sealed with a strip of white felt to prevent insects from escaping. The number of insects on each of the four leaves was then counted one, two, and twenty-four hours after release. For CYSDV, the assay was repeated with different plants 14 times with approximately 25 whiteflies used for each iteration. Whiteflies had to be chilled for 30s in −20 °C to prevent them from escaping as they were being transferred to the holding area under the arena. This occasionally resulted in one or two fatalities. For CMV, this assay was repeated with different plants 15 times, using approximately 20 alate aphids per iteration. Although winged, they usually did not make any attempt to fly away during transfer to the behavioral assay arena, and, therefore, did not require chilling.

To evaluate the side effects of ASM on plant growth, we measured the dry weights of aboveground tissue from plants treated with either 20 mL distilled water or 25 ppm ASM solution at 1.5 weeks of age in the greenhouse, and performed a field experiment to evaluate ASM effects on melon production and quality. In greenhouse experiments, plant shoots were cut off at the soil line, placed in individual paper bags, and dried at 60 °C for one week before weighing. Plants were harvested either at 5 weeks of age (3.5 weeks after ASM application) or at 6 weeks of age (4.5 weeks after ASM application), to evaluate changes in the severity of side effects at different time points in plant phenology post-application. The experiment was repeated twice for plants harvested at 5 weeks of age: the first iteration used 8 plants per treatment group, after which we opted to reduce the number of plants to six per treatment group for the second iteration due to logistical constraints. This resulted in a total of 14 plants per treatment group. The assay was also repeated twice for plants harvested at 6 weeks of age using 6 plants per treatment group each time and, thus, resulting in a total of 12 plants per treatment group.
For the field experiment, six 1.5 m wide flat-top beds were prepared with furrows in between at the UC Riverside Agricultural Operations facility. Beds were pre-treated with a pre-emergent herbicide (Pre-far) which is typically used prior to melon planting in California. Furrows were treated throughout the season with spot treatments of Roundup (Monsanto, St. Louis, MO, USA) and Reward (Syngenta, Greensboro, NC, USA) to prevent weeds from over-shadowing developing vines. All beds were outfitted with drip tape down the center, which was connected to an automated irrigation system. Melon seedlings (cv. Gold Express) to be used in the field experiment were started in the greenhouse in 36 pot flats. On May 7 2019, we transplanted seedlings to the field when the first true leaves had fully expanded (3.5 weeks post-planting). Beds were well watered prior to planting, and subsequently, all beds were watered for 45 min each day until week 5, at which time the watering was increased to 60 min each day to keep up with transpiration from larger plants. After planting, the beds were divided into plots of four plants each using marking flags, and each plot was assigned randomly to one of three spray treatments: 25ppm ASM, 12.5ppm ASM (half dose), or water (control) (21 plots per treatment). ASM and control treatments were applied seven days after transplanting to allow plants to acclimate. Fertilizer was applied twice during the season through chemigation (Peter’s soluble fertilizer, 20-20-20 NPK, 20bs/acre rate); once shortly after planting, and once during the flowering period (week 6 post-treatment application). Plant size and health assessments were taken at 27 and 39 days post-transplanting. Plant size was rated on a 1–10 scale corresponding to the percent of the bed covered by each plant (1 = 0%–10% covered, 10 = 90%–100% covered) and plant health was rated on a 0–9 scale based on the percent of the plant that was deep green rather than yellow or brown (0 = dead, 1 = 0%–10% green, 9 = 90%–100% green). Melon yields were quantified at the conclusion of the season (three picks over three weeks, selecting melons at full slip during each pick).

The effect of ASM treatment on virus infection rate was determined using Chi-square tests. Differences in symptom severity, relative titer, and dry weight data between ASM-treated and untreated virus-inoculated plants were determined using independent t-tests or Wilcoxon rank sum tests, depending on whether data were normally distributed or not. All behavioral assay data were analyzed together (for each virus separately) using a generalized linear model with virus treatment, ASM treatment, and their interaction as fixed effects and time point as a random effect (R package ‘lme4′). For fixed effects terms that were significant in the mixed effects models (i.e., virus treatment, ASM treatment, or the interaction), we determined differences within each time point using two-way ANOVAs with interaction effect followed by Tukey’s tests. Melon size, condition, and yield data from our field experiment were analyzed using a one-way ANOVA with ASM treatment as a fixed factor having two levels (25 ppm and 12.5 ppm doses). Statistical differences were considered significant at p < 0.05. All statistical analyses were carried out using the statistical program “R” (version 3.5.1) (R Studio Core Team, Boston, MA, USA).

3.1. ASM Effects on Susceptibility to Viruses and Symptom Development

3.2. ASM Effects on Vector Attraction to, and Settling on, Virus-Infected Plants

3.3. Effects of ASM Treatment on Plant Size and Productivity

This study was conceptualized and supervised by K.E.M. J.R.K. performed all experiments, except EPG, which was conducted by M.-E.G. The manuscript was drafted by J.R.K. and K.E.M. All authors have read and agreed to the published version of the manuscript.

This work was supported by grants from the California Melon Research Board awarded to K. Mauck in 2018 and 2019 and Hatch project funds (CA-R-ENT-5144-H). J.R.K. is supported by the Provost’s Ph.D. fellowship from the University of California, Riverside.

The authors would like to acknowledge the contributions of Ian Wright and Quentin Chesnais in developing experimental methods for this project. Thanks to Bill Wintermantel for providing the CYSDV pathogen to initiate our culture. The ASM compound (Actigard) was generously donated for our use by Syngenta through a local representative (Jeanette Rapicavoli). 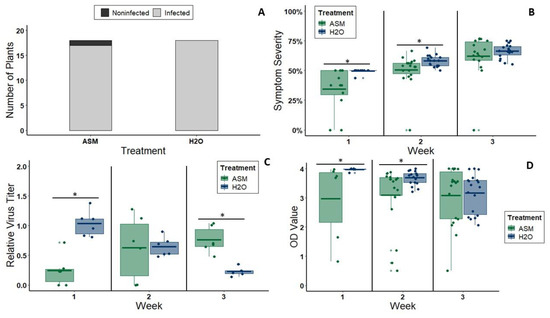 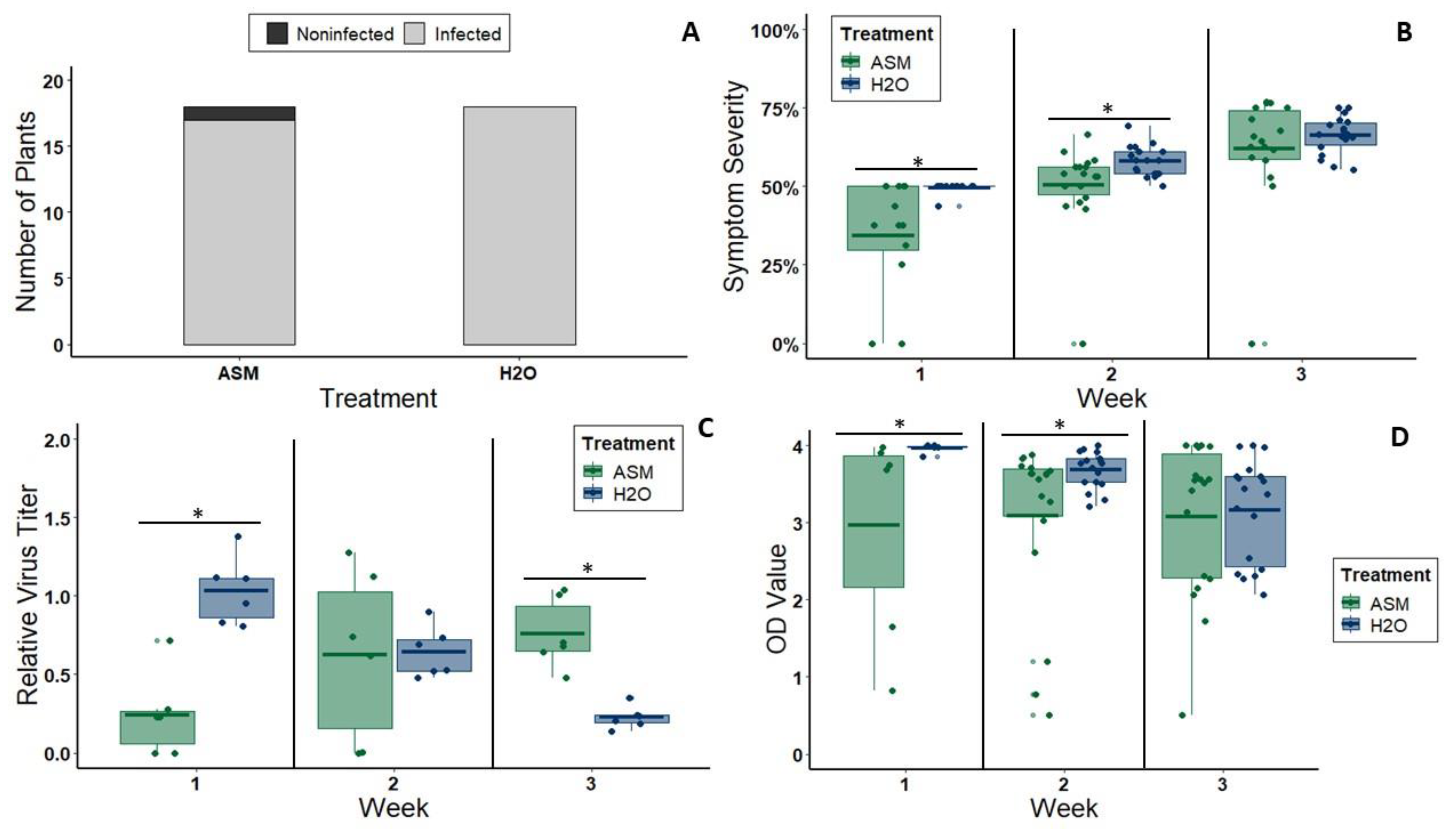 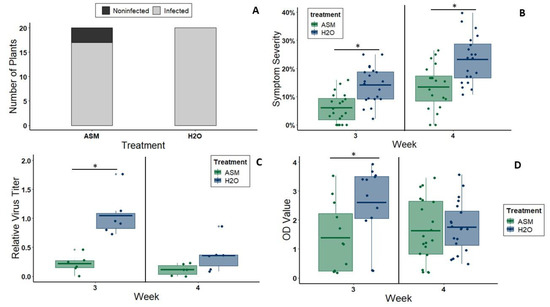 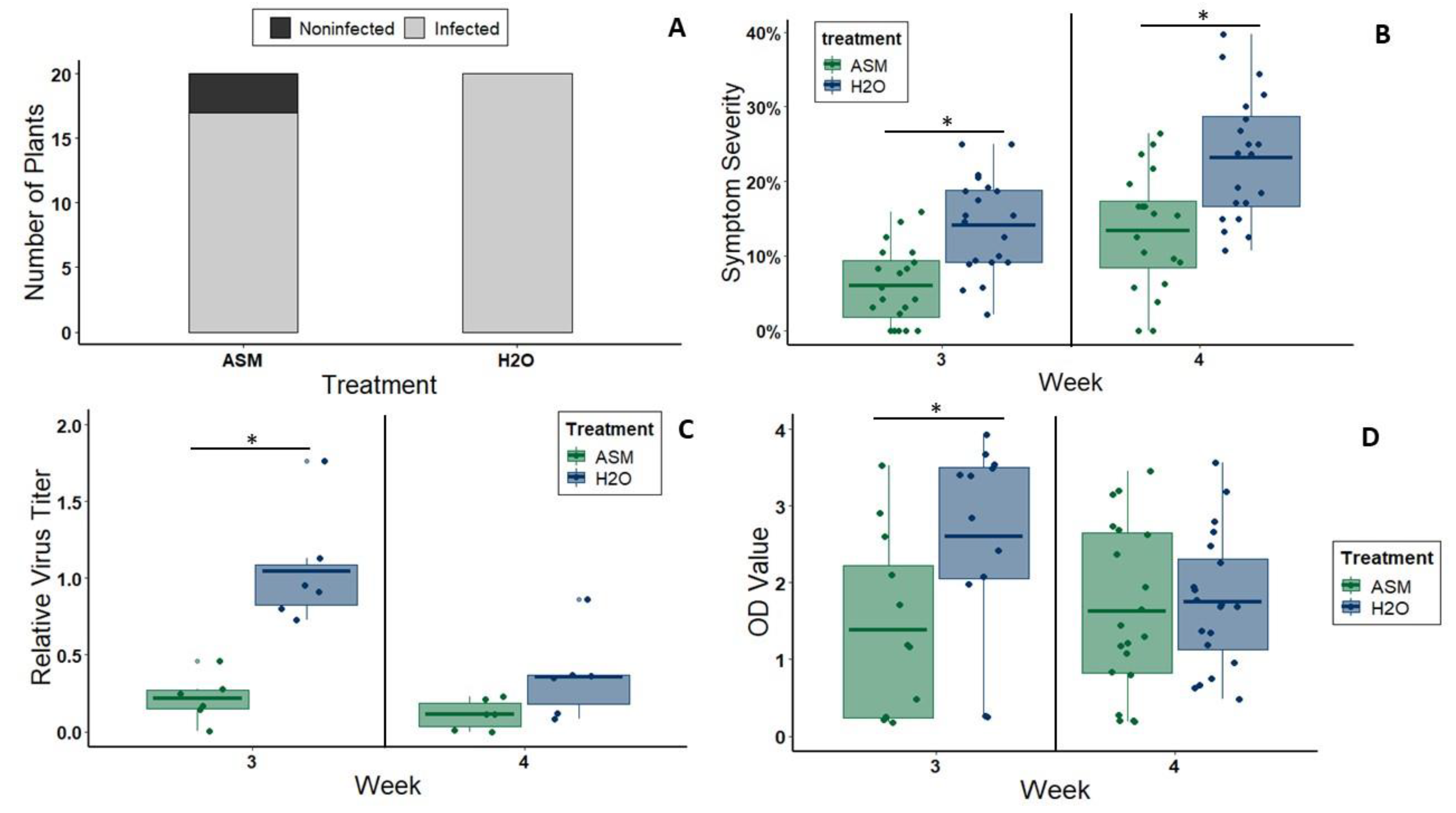 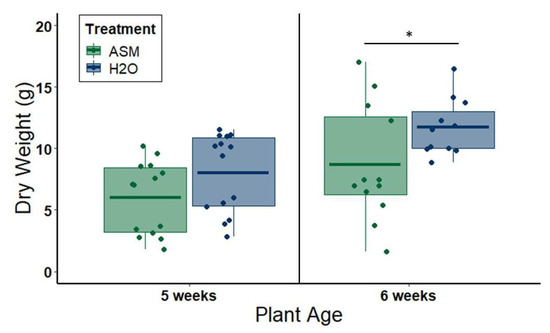 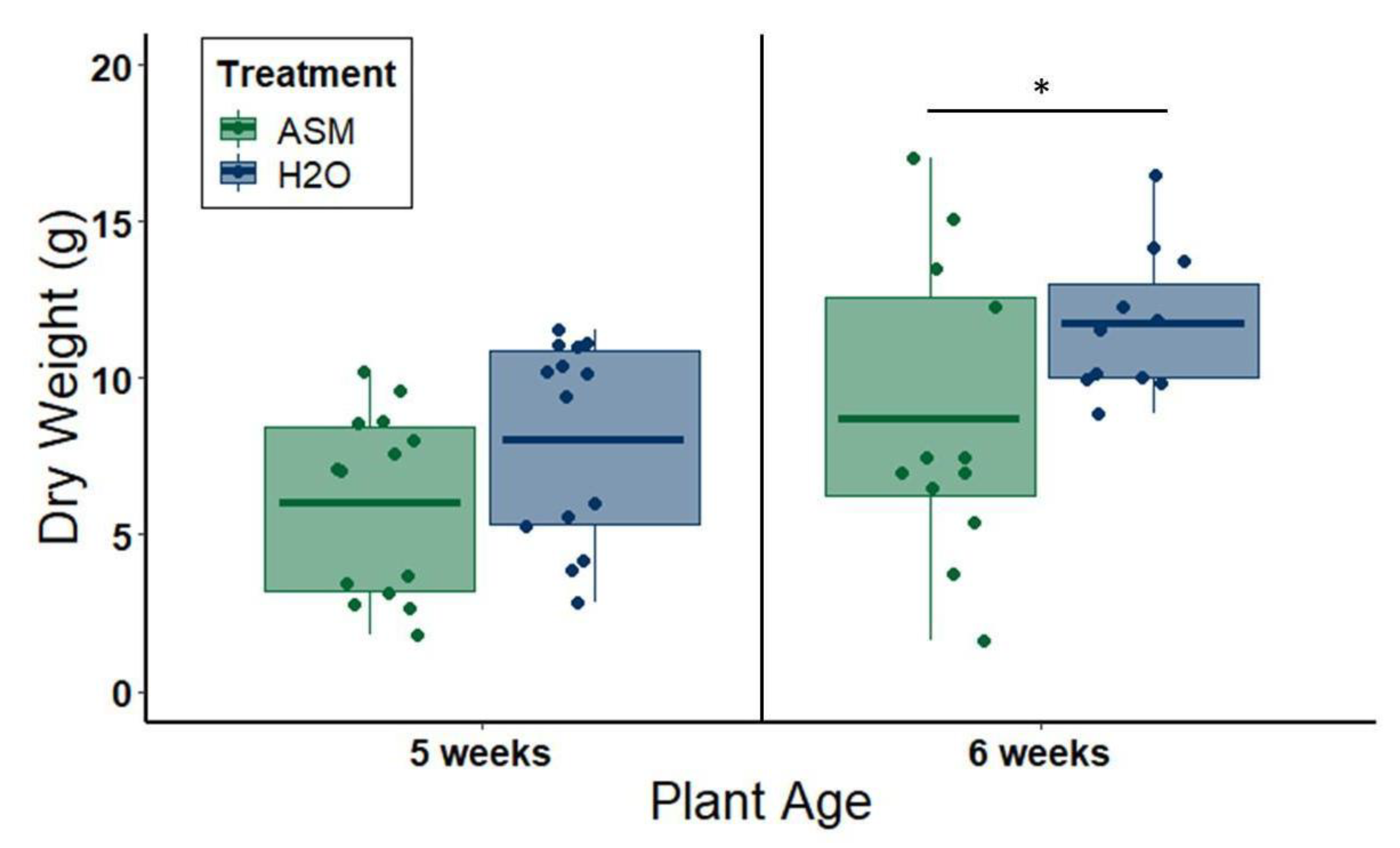 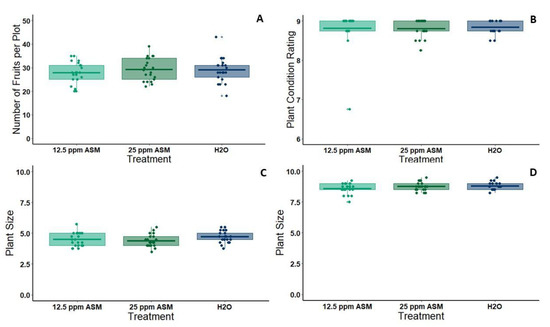 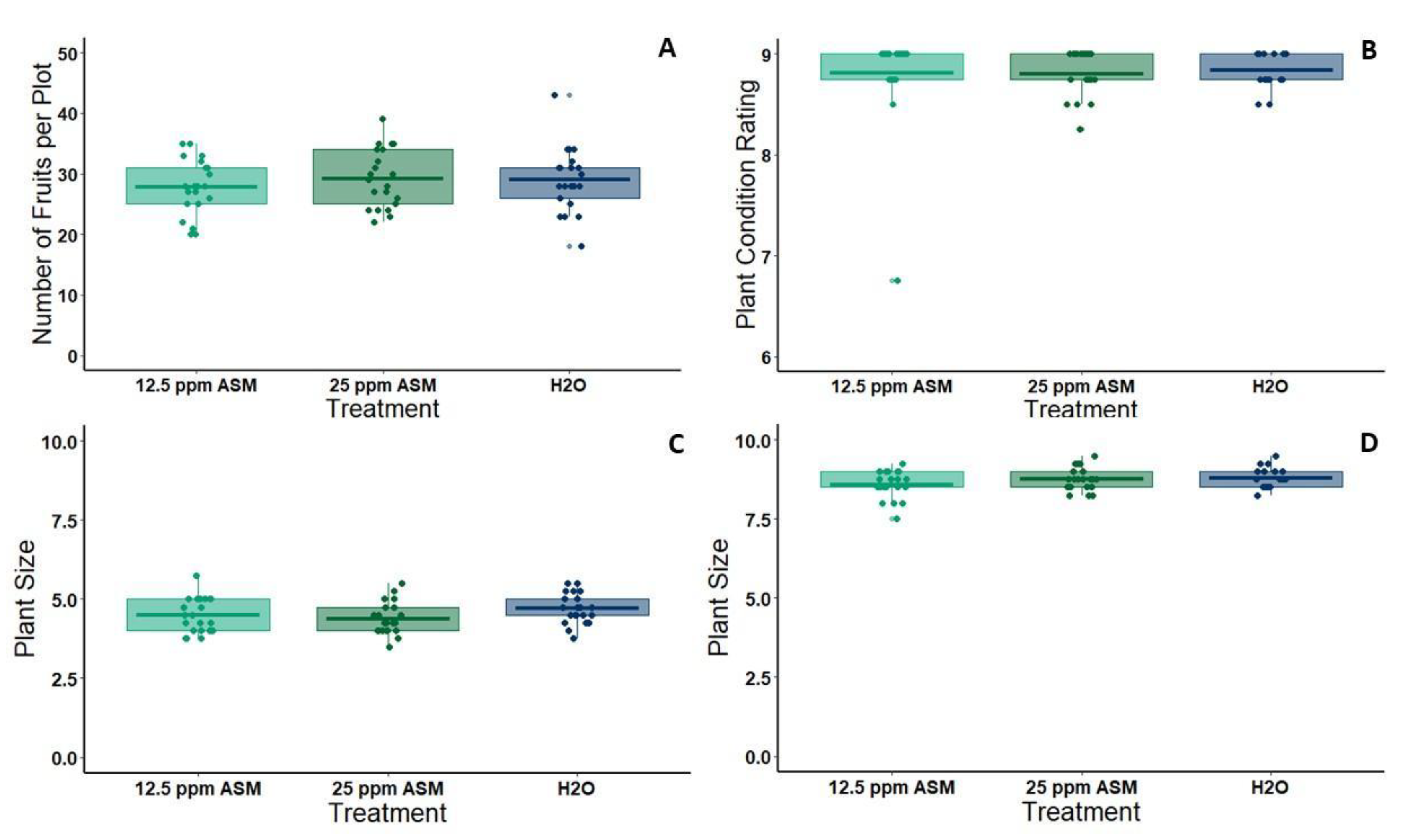