Feline panleukopenia, caused by feline parvovirus (FPV), is a highly infectious disease characterized by leucopenia and hemorrhagic gastroenteritis that severely affects the health of large wild Felidae. In this study, tiger FPV virus-like particles (VLPs) were developed using the baculovirus expression system. The VP2 gene from an infected Siberian tiger (Panthera tigris altaica) was used as the target gene. The key amino acids of this gene were the same as those of FPV, whereas the 101st amino acid was the same as that of canine parvovirus. Indirect immunofluorescence assay (IFA) results demonstrated that the VP2 protein was successfully expressed. SDS-PAGE and Western blotting (WB) results showed that the target protein band was present at approximately 65 kDa. Electron micrograph analyses indicated that the tiger FPV VLPs were successfully assembled and were morphologically similar to natural parvovirus particles. The hemagglutination (HA) titer of the tiger FPV VLPs was as high as 1:218. The necropsy and tissue sections at the cat injection site suggested that the tiger FPV VLPs vaccine was safe. Antibody production was induced in cats after subcutaneous immunization, with a >1:210 hemagglutination inhibition (HI) titer that persisted for at least 12 months. These results demonstrate that tiger FPV VLPs might provide a vaccine to prevent FPV-associated disease in the tiger. View Full-Text
Keywords: feline parvovirus; virus-like particles; VP2 protein; antibodies feline parvovirus; virus-like particles; VP2 protein; antibodies
►▼ Show Figures 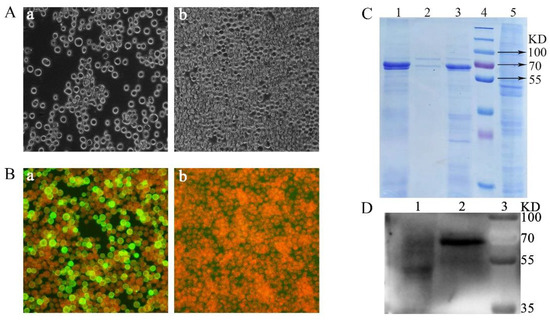