Members of Picornaviridae and of the Hepacivirus, Pegivirus and Pestivirus genera of Flaviviridae all contain an internal ribosomal entry site (IRES) in the 5′-untranslated region (5′UTR) of their genomes. Each class of IRES has a conserved structure and promotes 5′-end-independent initiation of translation by a different mechanism. Picornavirus 5′UTRs, including the IRES, evolve independently of other parts of the genome and can move between genomes, most commonly by intratypic recombination. We review accumulating evidence that IRESs are genetic entities that can also move between members of different genera and even between families. Type IV IRESs, first identified in the Hepacivirus genus, have subsequently been identified in over 25 genera of Picornaviridae, juxtaposed against diverse coding sequences. In several genera, members have either type IV IRES or an IRES of type I, II or III. Similarly, in the genus Pegivirus, members contain either a type IV IRES or an unrelated type; both classes of IRES also occur in members of the genus Hepacivirus. IRESs utilize different mechanisms, have different factor requirements and contain determinants of viral growth, pathogenesis and cell type specificity. Their dissemination between viruses by horizontal gene transfer has unexpectedly emerged as an important facet of viral evolution. View Full-Text
Keywords: IRES; Flavivirus; Horizontal gene transfer; Hepacivirus; Pegivirus; Pestivirus; Picornavirus; recombination; translation IRES; Flavivirus; Horizontal gene transfer; Hepacivirus; Pegivirus; Pestivirus; Picornavirus; recombination; translation
►▼ Show Figures 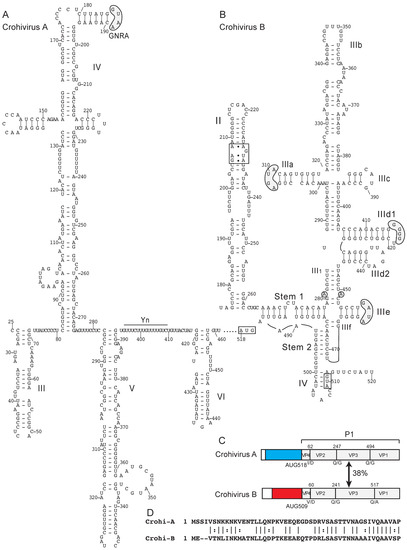