Production of Recombinant African Swine Fever Viruses: Speeding Up the Process
Next Article in Special Issue

Severe acute respiratory syndrome coronavirus-2 (SARS-CoV-2) is a member of the betacoronavirus family, which causes COVID-19 disease. SARS-CoV-2 pathogenicity in humans leads to increased mortality rates due to alterations of significant pathways, including some resulting in exacerbated inflammatory responses linked to the “cytokine storm” and extensive lung pathology, as well as being linked to a number of comorbidities. Our current study compared five SARS-CoV-2 sequences from different geographical regions to those from SARS, MERS and two cold viruses, OC43 and 229E, to identify the presence of miR-like sequences. We identified seven key miRs, which highlight considerable differences between the SARS-CoV-2 sequences, compared with the other viruses. The level of conservation between the five SARS-CoV-2 sequences was identical but poor compared with the other sequences, with SARS showing the highest degree of conservation. This decrease in similarity could result in reduced levels of transcriptional control, as well as a change in the physiological effect of the virus and associated host-pathogen responses. MERS and the milder symptom viruses showed greater differences and even significant sequence gaps. This divergence away from the SARS-CoV-2 sequences broadly mirrors the phylogenetic relationships obtained from the whole-genome alignments. Therefore, patterns of mutation, occurring during sequence divergence from the longer established human viruses to the more recent ones, may have led to the emergence of sequence motifs that can be related directly to the pathogenicity of SARS-CoV-2. Importantly, we identified 7 key-microRNAs (miRs 8066, 5197, 3611, 3934-3p, 1307-3p, 3691-3p, 1468-5p) with significant links to KEGG pathways linked to viral pathogenicity and host responses. According to Bioproject data (PRJNA615032), SARS-CoV-2 mediated transcriptomic alterations were similar to the target pathways of the selected 7 miRs identified in our study. This mechanism could have considerable significance in determining the symptom spectrum of future potential pandemics. KEGG pathway analysis revealed a number of critical pathways linked to the seven identified miRs that may provide insight into the interplay between the virus and comorbidities. Based on our reported findings, miRNAs may constitute potential and effective therapeutic approaches in COVID-19 and its pathological consequences. View Full-Text
Keywords: COVID-19; SARS–CoV-2; coronavirus; microRNAs (miRs 8066, 5197, 3611, 3934-3p, 1307-3p, 3691-3p, 1468-5p); viral pathogenesis; cell signalling pathways; comorbidities COVID-19; SARS–CoV-2; coronavirus; microRNAs (miRs 8066, 5197, 3611, 3934-3p, 1307-3p, 3691-3p, 1468-5p); viral pathogenesis; cell signalling pathways; comorbidities
►▼ Show Figures 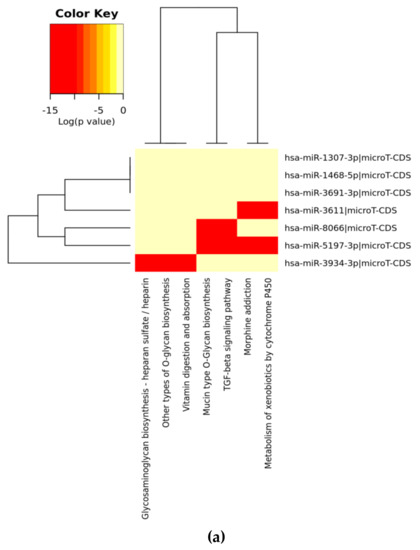