The health of honey bees is threatened by multiple factors, including viruses and parasites. We screened 557 honey bee (Apis mellifera) colonies from 155 beekeepers distributed all over Belgium to determine the prevalence of seven widespread viruses and two parasites (Varroa sp. and Nosema sp.). Deformed wing virus B (DWV-B), black queen cell virus (BQCV), and sacbrood virus (SBV) were highly prevalent and detected by real-time RT-PCR in more than 95% of the colonies. Acute bee paralysis virus (ABPV), chronic bee paralysis virus (CBPV) and deformed wing virus A (DWV-A) were prevalent to a lower extent (between 18 and 29%). Most viruses were only present at low or moderate viral loads. Nevertheless, about 50% of the colonies harbored at least one virus at high viral load (>107 genome copies/bee). Varroa mites and Nosema sp. were found in 81.5% and 59.7% of the honey bee colonies, respectively, and all Nosema were identified as Nosema ceranae by real time PCR. Interestingly, we found a significant correlation between the number of Varroa mites and DWV-B viral load. To determine the combined effect of these and other factors on honey bee health in Belgium, a follow up of colonies over multiple years is necessary. View Full-Text
Keywords: honey bee virus; honey bee parasite; virus screening; Belgium; Varroa; Nosema; DWV honey bee virus; honey bee parasite; virus screening; Belgium; Varroa; Nosema; DWV
►▼ Show Figures 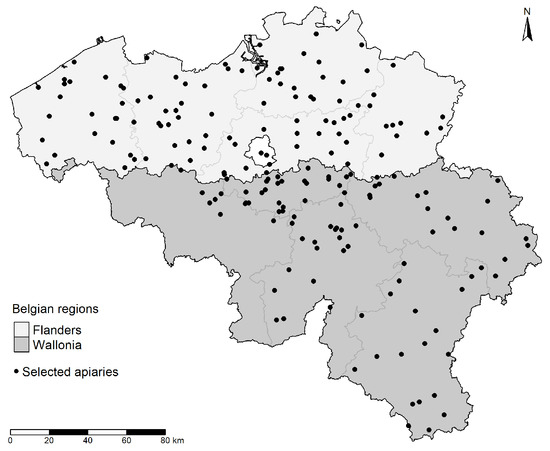