Metagenomic Insights into the Sewage RNA Virosphere of a Large City

Sewage-associated viruses can cause several human and animal diseases, such as gastroenteritis, hepatitis, and respiratory infections. Therefore, their detection in wastewater can reflect current infections within the source population. To date, no viral study has been performed using the sewage of any large South American city. In this study, we used viral metagenomics to obtain a single sample snapshot of the RNA virosphere in the wastewater from Santiago de Chile, the seventh largest city in the Americas. Despite the overrepresentation of dsRNA viruses, our results show that Santiago’s sewage RNA virosphere was composed mostly of unknown sequences (88%), while known viral sequences were dominated by viruses that infect bacteria (60%), invertebrates (37%) and humans (2.4%). Interestingly, we discovered three novel genogroups within the Picobirnaviridae family that can fill major gaps in this taxa’s evolutionary history. We also demonstrated the dominance of emerging Rotavirus genotypes, such as G8 and G6, that have displaced other classical genotypes, which is consistent with recent clinical reports. This study supports the usefulness of sewage viral metagenomics for public health surveillance. Moreover, it demonstrates the need to monitor the viral component during the wastewater treatment and recycling process, where this virome can constitute a reservoir of human pathogens. View Full-Text
Keywords: sewage RNA virosphere; viral metagenomics; wastewater; Picobirnavirus; Rotavirus sewage RNA virosphere; viral metagenomics; wastewater; Picobirnavirus; Rotavirus
►▼ Show Figures 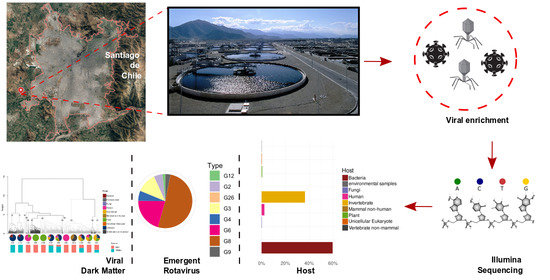