The HIV-1 Capsid: From Structural Component to Key Factor for Host Nuclear Invasion

Highly pathogenic avian influenza (HPAI), a zoonotic disease, is a major threat to humans and poultry health worldwide. In January 2014, HPAI virus subtype H5N8 first infected poultry farms in South Korea, and 393 outbreaks, overall, were reported with enormous economic damage in the poultry industry. We analyzed the spatiotemporal distribution of HPAI H5N8 outbreaks in poultry farms using the global and local spatiotemporal interaction analyses in the first (January to July 2014) and second (September 2014 to June 2015) outbreak waves. The space–time K-function analyses revealed significant interactions within three days and in an over-40 km space–time window between the two study periods. The excess risk attributable value (D0) was maintained despite the distance in the case of HPAI H5N8 in South Korea. Eleven spatiotemporal clusters were identified, and the results showed that the HPAI introduction was from the southwestern region, and spread to the middle region, in South Korea. This spatiotemporal interaction indicates that the HPAI epidemic in South Korea was mostly characterized by short period transmission, regardless of the distance. This finding supports strict control strategies such as preemptive depopulation, and poultry movement tracking. Further studies are needed to understand HPAI disease transmission patterns. View Full-Text
Keywords: avian influenza; H5N8 subtype; South Korea; spatiotemporal analysis avian influenza; H5N8 subtype; South Korea; spatiotemporal analysis
►▼ Show Figures 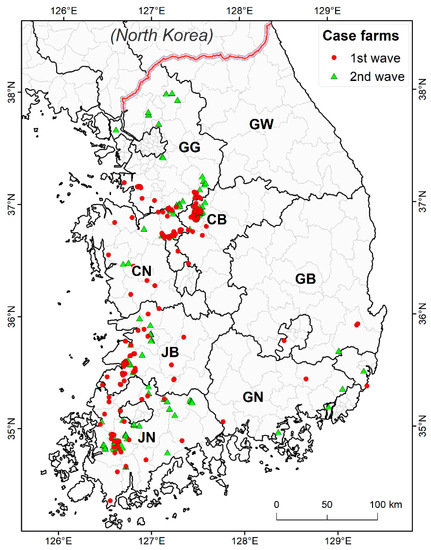