Tilapia tilapinevirus, or tilapia lake virus (TiLV), is a highly contagious virus found in tilapia and its hybrid species that has been reported worldwide, including in Asia, the Americas, and Africa. In this study, we experimentally challenged Mozambique tilapia (Oreochromis mossambicus) with a virulent TiLV strain, VETKU-TV01, at both low (1 × 103 TCID50/mL) and high (1 × 105 TCID50/mL) concentration. After the challenge, the Mozambique tilapia showed pale skin with some hemorrhage and erosion, lethargy, abdominal swelling, congestion around the eye, and exophthalmos; there was a cumulative mortality rate at 48.89% and 77.78% in the groups that received the low and high concentration, respectively. Quantitative PCR and in situ hybridization confirmed the presence of TiLV in the internal organs of moribund fish. Notably, severe histopathological changes, including glycogen depletion, syncytial hepatic cells containing multiple nuclei and intracytoplasmic inclusion bodies, and infiltration of melanomacrophage into the spleen, were frequently found in the Mozambique tilapia challenged with high TiLV concentration. Comparatively, the infectivity and pathology of the TiLV infection in Mozambique tilapia and red hybrid tilapia (Oreochromis spp.) were found to be similar. Our results confirmed the susceptibility of Mozambique tilapia, which has recently been determined to be a vulnerable species, to TiLV infection, expanding knowledge that the virus can cause disease in this fish species. View Full-Text
Keywords: Tilapia tilapinevirus; TiLV; Mozambique tilapia; infection; pathology Tilapia tilapinevirus; TiLV; Mozambique tilapia; infection; pathology
►▼ Show Figures 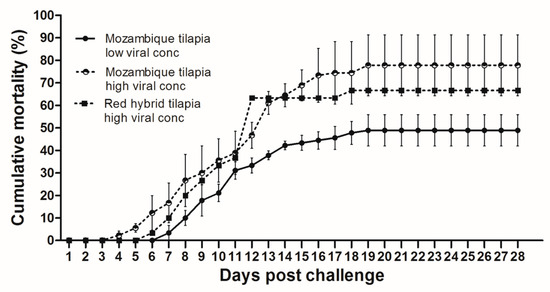