Orthohantavirus Survey in Indigenous Lands in a Savannah-Like Biome, Brazil
Next Article in Special Issue

Plant viruses transmitted by hemipteran vectors commonly cause losses to crop production. Rice stripe virus (RSV) and rice black streaked dwarf virus (RBSDV) are transmitted to rice plants by the same vector, the small brown planthopper (SBPH), Laodelphax striatellus Fallén, in a persistent propagative manner. However, rarely do the respective diseases they cause occur simultaneously in a field. Here, we determined the acquisition efficiency of RSV and RBSDV when acquired in succession or simultaneously by SBPH. When RBSDV was acquired first, RSV acquisition efficiency was significantly lower than when only acquiring RSV. However, RBSDV acquisition efficiency from insects that acquired RSV first was not significantly different between the insects only acquiring RBSDV. Immunofluorescence assays showed that the acquisition of RBSDV first might inhibit RSV entry into midgut epithelial cells, but RSV did not affect RBSDV entry. SBPHs were more likely to acquire RBSDV when they were feeding on plants coinfected with the two viruses. When RBSDV was acquired before RSV, RBSDV titer was significantly higher and RSV titer first declined, then increased compared to when only acquiring RBSDV or RSV. Only 5% of the SBPHs acquired both viruses when feeding on plants coinfected with RSV and RBSDV. These results provide a better understanding of the interaction between two persistent viruses when present in the same vector insect and explain why RSV and RBSDV occur in intermittent epidemics.
Keywords: rice stripe virus (RSV); rice black-streaked dwarf virus (RBSDV); acquisition; accumulation; virus interaction rice stripe virus (RSV); rice black-streaked dwarf virus (RBSDV); acquisition; accumulation; virus interaction

Rice stripe virus (RSV, genus Tenuivirus, family Phenuiviridae) and rice black streaked dwarf virus (RBSDV, genus Fijivirus, family Reoviridae) cause serious yield losses of rice in East Asian countries [1,2,3,4,5,6,7]. RSV usually causes chlorotic or necrotic stripes on newly developed leaves, then premature wilting and stunting, sometimes resulting in total crop loss [8,9,10]. RBSDV causes stunted stems and dwarfism in seedlings [11,12], especially severe growth retardation and excessive tillering, and typical rice grains do not form [13]. Although RSV and RBSDV are transmitted to host plants by the same insect vector, the small brown planthopper (SBPH, Laodelphax striatellus Fallén; order Hemiptera, family Delphacidae), diseases caused by these two viruses rarely occur simultaneously in the field [14]. A high viruliferous rate and population density of the vector insects are the main factors causing epidemics.
The SBPH is an important insect vector of several crop viruses due to its piercing and sucking mouthparts [3,15]. It does not migrate long distances and can complete its life cycle in a variety of Gramineae plants. The virus can then accumulate in an area once infection has been established. SBPHs can commonly be transported to other regions by wind or in infected seedlings. The favored stage for it to invade crops and transmit viruses is in the rice seedling stage. During unfavorable periods, SBPHs move to other cereals or weeds to survive and maintain their population [3,4]. During the winter, SBPH nymphs can survive on crops such as wheat, barley, and some grass weeds. Some insects can settle in wheat plants infected with RSV or RBSDV in the spring, then acquire the viruses to cause virus epidemics in rice or maize [16,17,18].
RSV and RBSDV are transmitted in a persistent and propagative manner in the SBPH [8,19,20,21,22,23]. Persistent viruses exist in the insect vector until its death, and some persistent viruses can replicate in the insect’s organs [19]. The virus firstly enters the insect gut and infects the epithelial cells where the virions replicate. Then, the virions move from the gut to other tissues, including the salivary glands from where they are transmitted to another plant to complete the horizontal transmission. Some persistent viruses such as RSV can be transmitted from female hoppers to their progeny via eggs (vertical transmission), but RBSDV is not transmitted to the next generation [24]. Insects have defense systems to avoid virus infection, replication, or release. Therefore, a virus that requires a specific insect vector for successful transmission needs to fend off attack by the insect’s immune system and overcome the transmission barriers in the midgut or salivary gland [19,25,26,27]. Effective transmission by the insect vector thus depends on factors in either the virus itself or the vector.
Thus far, the SBPH has rarely been found to carry both RSV and RBSDV in the field, but in laboratory experiments the insect can simultaneously carry both viruses [16]. However, little is known about whether RSV and RBSDV in same insect are favored or if the presence of one limits the acquisition efficiency of the other. In the present work, we studied the interplay of RSV and RBSDV when present in the same SBPH. We found that coinfection with RBSDV limited RSV acquisition by inhibiting RSV entry into the midgut epithelial cells of SBPHs and that only 5% of the insects acquired both RSV and RBSDV from coinfected plants. These results explain why diseases caused by RSV and RBSDV rarely occur simultaneously in the field. The results will also aid the development of more effective control measures and improve our understanding of the behavior of two persistent viruses that interact in the same vector insect.

Insects for each treatment were collected and placed on ice for 30 min, then dissected in a PBS solution to excise the guts. The guts were fixed in 4% (vol/vol) paraformaldehyde for 2 h, washed 3 times with PBS, and then incubated in osmotic buffer (2% (vol/vol) TritonX-100 in PBS) for 30 min at room temperature. After another wash with PBS, the guts were incubated with anti-RSV monoclonal antibody labeled with DyLight 549 (red), anti-RBSDV antibody labeled with Alexa Fluor 488 (green), and with phalloidin labeled with Alexa Fluor 633 in PBS containing 3% (wt/vol) BSA at 37 °C room temperature for 2 h. Samples were then washed three times in PBS, and stained with glycerol at room temperature. Fluorescence was observed with a Zeiss LSM 780 3-Channel Confocal Microscope [28].

After checking the SBPHs which were infected with both viruses from the RBSDV-RSV groups and RSV-RBSDV groups by RT-PCR, we quantified the virus titer of RSV and RBSDV in the whole body of each insect by analyzing the expression of viral capsid genes (RSV pc3 and RBSDV p10) in the insect using RT-qPCR [29,30]. The relative RSV pc3 and RBSDV p10 RNA levels of the individual insects which fed on the virus source at 7 and 14 days after acquisition access to the second virus were calculated. For statistical analysis, we checked more than 10 insects for each group. The biological experiments were done at least three times independently. Total RNA was extracted from the insects using the standard TRIzol reagent protocol (Invitrogen). The purity and amount of extracted RNA were quantified using the NanoDrop 2000 spectrophotometer as the ratio of OD260/OD280. cDNA was synthesized from 2 μg of total RNA using a Fast Quant RT Kit (TIANGEN, Beijing, China). For an internal reference, the actin gene was used to normalize the quantity of total RNA purified from each sample. The Super Real PreMix Plus (SYBR Green) Kit (TIANGEN) was used for the PCR with a final volume of 20 μL containing 10 μL of PCR buffer, 0.5 μL of each primer (10 μM/μL), 1 μL of template cDNA, 7 μL of DEPC H2O, and 10 μL 2 × RealStar Green Fast Mixture ROX II. Real-time PCR was performed with SYBR Green using QuantStudio 6 Flex ThermoFisher (Applied Biosystems) and a thermocyling program of 95 °C for 2 min and 40 cycles of 95 °C for 15 s, and 60 °C for 30 s. Fluorescence was measured at the end of every 60 °C extension phase. Relative gene expression was calculated according to the Livak method (2−ΔΔCt).

3.1. Acquisition Efficiency of RSV and RBSDV by SBPHs after Successively Feeding on Plants Infected with a Different Virus

3.2. Localization of RSV and RBSDV in Midgut Epithelial Cells from Insects Successively Feeding on Plants Infected with a Different Virus

3.3. Viral Titer of RSV and RBSDV in Insects Successively Feeding on Plants Infected by Different Viruses

3.4. Acquisition and Accumulation of RSV and RBSDV in SBPHs That Fed on Plants Coinfected with Both Viruses

The RT-PCR to detect the viruses in the insects showed that, after 3 days of acquisition access to coinfected plants, around 50% of the insects did not acquire virus, 39% acquired RBSDV, only 3% acquired RSV, and 5% acquired both (Figure 6A). Further, when RSV-pc3 and RBSDV-p10 RNA levels were detected by RT-PCR, RBSDV-p10 levels were significantly higher than in the RBSDV-only control insects (Figure 6B). Although the levels of RSV-pc3 were low, they did not differ significantly from the RSV-only control levels (Figure 6C).

We thank B. E. Hazen (Willows End scientific editing and writing, USA) for critical reading and revising of the manuscript and to Zhang Meng for her technical support in breeding and maintenance of SBPHs.

The authors declare that they have no competing interests. 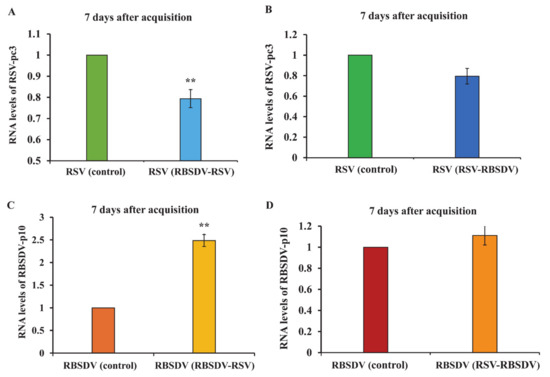 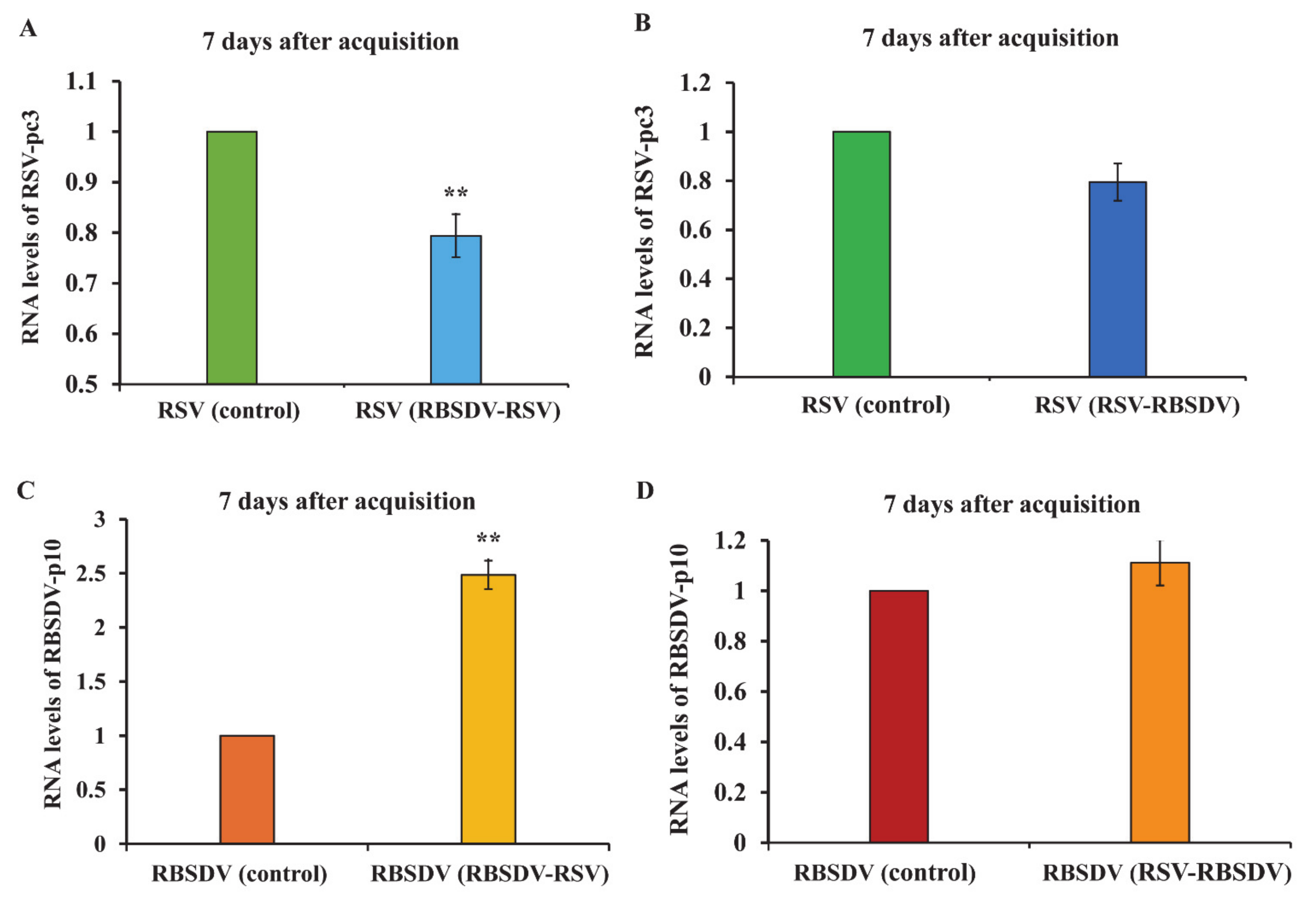 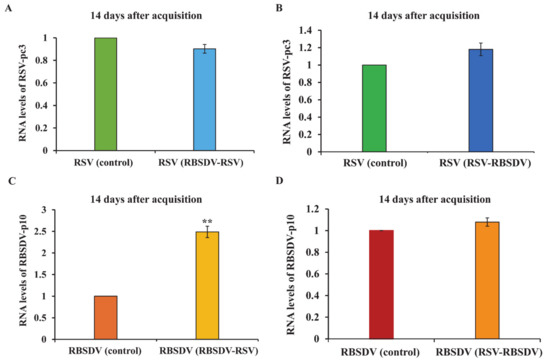 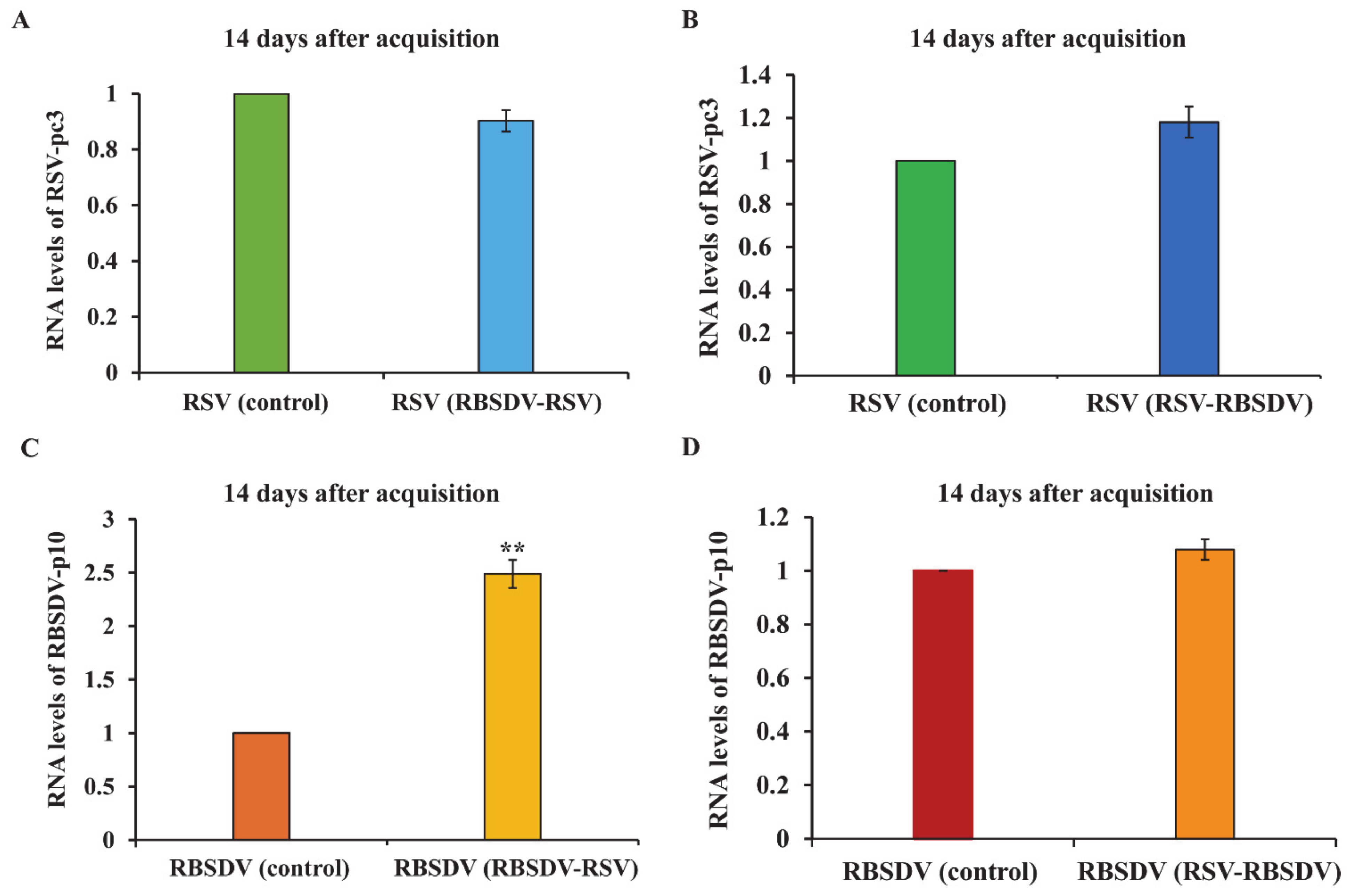