The Viral Capsid: A Master Key to Access the Host Nucleus
Next Article in Special Issue

Hantaviruses cause two clinical disease entities. Hemorrhagic fever with renal syndrome (HFRS) found in Eurasia is caused by Hantaan, Puumala and Dobrava viruses. Hantavirus cardiopulmonary syndrome (HCPS) present in the Americas is caused by Sin Nombre, Andes and related hantaviruses. Seoul virus that causes HFRS is found worldwide [1].
Puumala virus (PUUV) is the only human pathogenic hantavirus in Finland. It is a member of the Orthohantavirus genus in the Hantaviridae family, order Bunyavirales and it is carried by the bank vole (Myodes glareolus). PUUV-induced HFRS is characterized by thrombocytopenia, increased capillary leakage, and acute kidney injury (AKI).
The clinical picture of PUUV infection varies from asymptomatic infection to severe disease, but most cases have a mild course. In typical forms of infection, five distinct phases can be recognized: febrile, hypotensive, oliguric, polyuric and convalescent. Patients usually arrive at the hospital at the hypotensive phase when capillary leakage prevails. Patients may have pulmonary infiltrations and pleural effusion, pericardial effusion, and retroperitoneal edema [1]. Of the hospitalized patients, less than 5% have circulatory shock. As markers of renal involvement, most patients have transient proteinuria and hematuria. The hypotensive phase is followed by oliguria and AKI. About 6% need transient dialysis treatment. Polyuria, that can be substantial, is a sign of recovery [2]. Bleeding diathesis is rare and case fatality is less than 0.5% [2]. Host genetic factors influence the clinical course of the disease [3].
The impact of hyperglycemia on the outcome of hospitalized patients has been studied in various diseases. It is currently appreciated that hyperglycemia, whether critical illness induced or related to diabetes, is associated with poor outcome in severely ill patients [4,5]. In diabetic SARS-CoV2 patients, poorly controlled glycemic variability is associated with higher mortality as well as with higher incidence of AKI, septic shock, acute respiratory distress syndrome (ARDS) and disseminated intravascular coagulation (DIC) [6,7]. Interestingly, fasting blood glucose at admission in COVID-19 patients without previous diagnosis of diabetes is also an independent predictor for 28-day mortality in a multi-center retrospective study [7].
There is a growing body of evidence showing that acute hyperglycemia in non-diabetic patients is related to kidney injury. In patients with acute myocardial infarction, admission hyperglycemia is associated with AKI [8]. In an experimental animal model, 6-h glucose infusion caused structural and functional changes in kidney glomeruli and tubular epithelial cells, and induced structural changes in small vessels [9]. Of these, renal tubular injury appeared to be most prominent. In addition, transient hyperglycemia induced inflammation, oxidative stress and apoptosis [9].
Recently we reported that 12% of patients with PUUV infection have mild and transient glucosuria on admission to hospital. Glucosuria is associated with more severe thrombocytopenia and inflammation, as well as with higher capillary leakage and more severe AKI [10]. Histologically PUUV causes acute tubulointerstitial nephritis (ATIN), and therefore we hypothesized that more severe ATIN impaired glucose reuptake in the proximal tubule of the kidney resulting in glucosuria [10]. In that study, blood glucose concentration was slightly higher in the glucosuric patients, but in the majority of patients, it was below the kidney glucose threshold level [10]. This finding led us to investigate the association of blood glucose level with the severity of PUUV infection.
We analyzed the outcome of patients grouped according to the maximum plasma glucose concentration of either <7.8 mmol/L or ≥7.8 mmol/L during hospital treatment. According to our results, plasma glucose concentration is associated with all the known determinants of disease severity of acute PUUV infection. In addition, markers of increased capillary leakage and levels of thrombocytopenia and leukocytosis are associated dose dependently with maximum plasma glucose level.

The study cohort included 185 adult patients treated in Tampere University Hospital, Finland, due to serologically confirmed acute PUUV infection during the years 1986–2017. Information of plasma glucose level during hospital care was collected retrospectively. Analyses of plasma glucose concentrations during hospital treatment were based on clinical relevance. One glucose value was found for 127 patients, two for 39 patients, and 3–10 values for 19 patients.
A detailed medical history of the patients was obtained, and all patients were carefully clinically examined. Blood pressure, heart rate and weight were measured at least daily. The daily urine output was followed during the hospital stay.
Out of the 185 patients, 69 (37%) had one or several previous diagnoses: hypertension (n = 19), hypercholesterolemia (n = 8), type 2 diabetes (n = 6), cardiac arrhythmia/conduction disturbance (n = 6), coronary heart disease (n = 4), rheumatoid arthritis (n = 3), coeliac disease (n = 3), operated malignancy (n = 3), prostate hyperplasia (n = 2), osteoporosis (n = 2), psoriasis (n = 2), and mental illness (n = 2). In addition, the following diagnoses were present in one patient each: hyperthyroidism, hypothyroidism, cerebral infarction, juvenile rheumatoid arthritis, Sjögren’s syndrome, spondyloarthropathy, Crohn’s disease, epilepsy, sarcoidosis, idiopathic thrombocytopenia, bronchial asthma and spherocytosis. One patient was pregnant, and one was breastfeeding. One patient was diagnosed with type two diabetes during hospital care. None of the patients had a known chronic kidney disease before the PUUV infection. Three patients used metformin prior to hospitalization and two patients received insulin during hospital treatment.
A chest radiograph was taken from 75/185 (41%) patients at hospital admission. Radiographs were analyzed by one radiologist for the presence or absence of pulmonary infiltrations or pleural effusion [11]. Chest radiographs were graded as normal, or as having mild, moderate or severe changes as described by Paakkala et al. [11].
Shock was defined as having systolic blood pressures of under 90 mmHg and clinical symptoms of shock such as pale, cold, or clammy skin, rapid breathing, and rapid heartbeat.
All patients provided a written informed consent, and the study with its extensions was approved by the Ethics Committee of the Tampere University Hospital (study codes 97166, 99256, R04180, R15007 and R09206).

The diagnosis of PUUV infection was made by detecting the typical granular staining pattern of acute infection and/or low avidity of IgG antibodies in immunofluorescence using PUUV -infected Vero E6 cells as antigens, and/or by detecting PUUV IgM antibodies by an “in-house” enzyme-linked immunosorbent assay based on baculovirus-expressed PUUV nucleocapsid protein. The development and use of the above and diagnostic methods have been described elsewhere [12].
Type 2 diabetes is diagnosed based on increased concentration of glycated hemoglobin (HbA1c), fasting plasma glucose, or 2-h postprandial plasma glucose. According to the American Diabetes Association (ADA) and World Health Organization (WHO) criteria, P-Gluc < 7.8 mmol/L is normal in oral glucose tolerance test, P-Gluc 7.8–11.0 mmol/L corresponds to impaired glucose tolerance and P-Gluc > 11.0 mmol/L is diabetic. Random glucose value of >11 mmol/L in a symptomatic patient is diagnostic for diabetes [13]. There are no reference values of what constitutes hyperglycemia during acute illness. For the purpose of the present study, random glucose value <7.8 mmol/L during hospital care was considered normoglycemic, and random glucose level ≥7.8 mmol/L was considered hyperglycemic.
Blood glucose was analyzed from whole blood samples and reported as blood glucose (mmol/L) until August 2003, and as plasma glucose (mmol/L) thereafter. For the analyses, blood glucose values were converted to plasma glucose values by multiplying the blood glucose values by 1.11 [14]. The highest plasma glucose value measured during the hospital treatment was chosen for the analysis, regardless of how many samples per patient were available.
Plasma creatinine was analyzed by Vitros (Johnson & Johnson, Rochester, NY, USA) until the year 1999 and by Cobas Integra (F. Hoffmann-La Roche Ltd., Basel, Switzerland) from thereafter. Blood cell count was determined by automated hematological cell counters (Bayer Diagnostics, Elkhart, IN, USA) and albumin concentrations using routine automated chemistry analyzers. All laboratory determinations were performed by the Laboratory Centre of the Pirkanmaa Hospital District (later named Fimlab laboratories), Tampere, Finland.
Plasma creatinine, C-reactive protein (CRP) and blood count including hematocrit, leukocytes and platelets were measured in 96%–100%, and plasma albumin in 48% of the study subjects. Information on body mass index (BMI) and shock was available from 70% and 90% of the patients, respectively. Minimum or maximum of the values were used in the statistical analysis as indicated in Table 1 and Table 2.

The data are presented as medians and ranges for continuous variables and numbers and percentages for categorical variables. Groups were compared using the Kruskal-Wallis test or Mann–Whitney U test, as appropriate. Bonferroni correction for multiple comparisons was applied in the post-hoc analyses. The Chi-square or Fisher’s exact tests were used to examine differences in proportions. Spearman correlations (rS) was used to study the relationship between continuous variables. Multivariate linear regression analyses were performed, taking variables reflecting disease severity (maximum blood hematocrit, leukocytes and CRP, and minimum blood platelet and plasma albumin level, as well as change in weight and duration of hospital stay) as dependent variables, and taking maximum plasma glucose value, BMI, age and sex as independent variables. All analyses were performed using IBM SPSS Statistics version 25 (IBM, Armonk, NY, USA).

We have described here a novel finding that plasma glucose levels relate to the clinical, laboratory and radiological markers of increased capillary leakage, thrombocytopenia, inflammation, and AKI in PUUV infection. Further studies are needed to explore both the mechanism of hyperglycemia and the possible pathophysiological role of plasma glucose behind these findings.

The study with its’ extensions was conducted according to the guidelines of the Declaration of Helsinki, and approved by the Ethics Committee of the Tampere University Hospital (study codes 97166, 99256, R04180, R15007 and R09206).

The skillful assistance of Katriina Ylinikkilä and Eini Eskola is greatly appreciated. 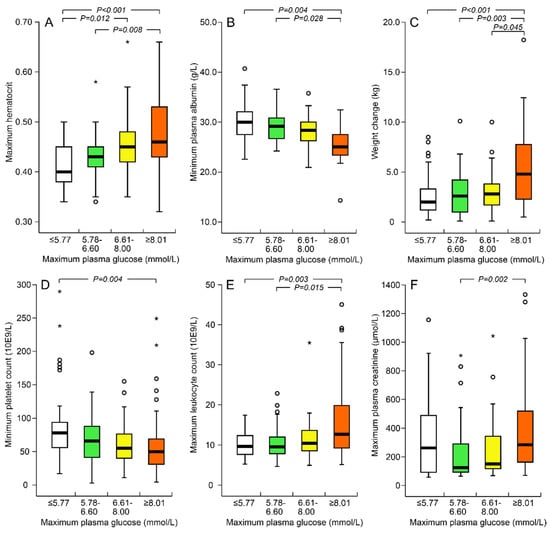 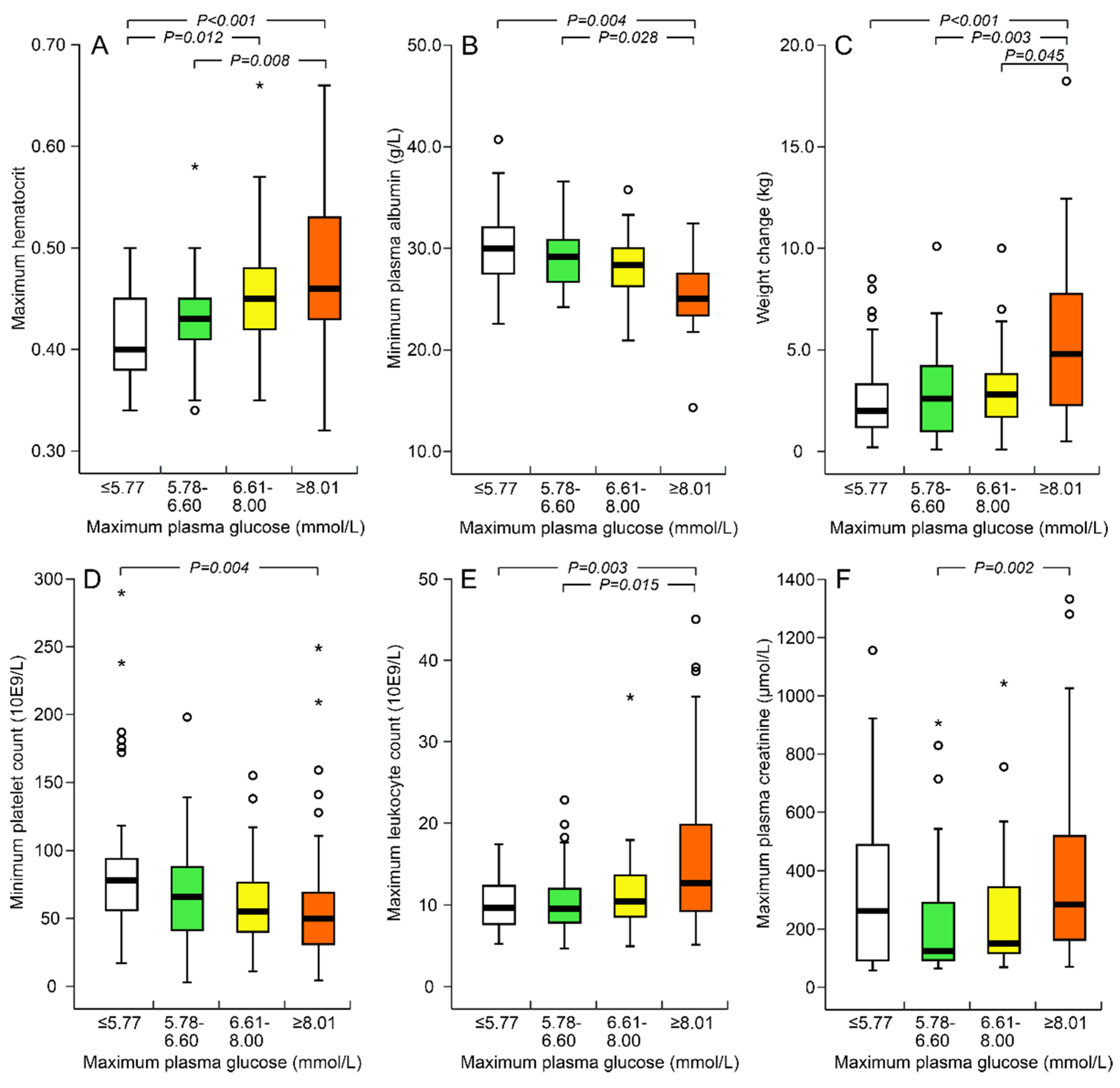