Acetylation, Methylation and Allysine Modification Profile of Viral and Host Proteins during Influenza A Virus Infection

Human lung alveolar epithelial cells, A549 were grown and maintained in minimum essential medium (MEM) supplemented with 10% foetal bovine serum, 1% L-glutamine and 1% penicillin-streptomycin (Life Technologies, Carlsbad, CA, USA) under 5% CO2 atmosphere and at 37 °C. Influenza virus A/Puerto Rico/8/1934 (H1N1) was propagated in 10 days old embryonated chicken eggs and titrated in Madin Darby canine kidney (MDCK) cells. For infection, confluent A549 cell monolayers, prewashed twice with serum-free MEM, were incubated with virus inoculum (multiplicity of infection of 1.0) in serum-free MEM for 1 h at 35 °C. The inoculum was removed, cells were washed once with serum-free MEM, replenished with fresh serum-free MEM, and incubated at 35 °C. After 24 h, the culture medium and the cells were harvested separately. The medium was titrated to measure the amount of released viral progeny and confirm a productive infection.

Cells were lysed in a lysis buffer containing 40 mM Tris base, 1 mM EDTA, 0.5 M TCEP, 0.5% SDS, 0.5% sodium deoxycholate, 0.1% NP-40 and 1X protease inhibitor cocktail. The lysates were centrifuged at 16,000× g for 30 min and the supernatants were further processed by the FASP method described elsewhere [31]. The resulting protein amount was quantified by Bradford assay and digested with trypsin overnight. Peptides were dried and concentrated as above.

The dried peptides were resolubilized in 5% acetonitrile (ACN) and 0.1% formic acid (FA) in water and analysed using the Ultimate 3000 nano-flow uHPLC-System (Dionex Co, San Jose, CA, USA) in-line coupled to the nanospray source of LTQ-Orbitrap XL mass spectrometer (ThermoFisher Scientific, San Jose, CA, USA). The peptides were separated on in-house packed emitter tip columns (75 μm ID fused silica tubing filled with C-18 material to a length of 12 cm) at a flow rate of 400 nL/min. The liquid chromatography gradient gradually increased from 5% (v/v) ACN, 0.1% (v/v) FA to 45% ACN, 0.1% (v/v) FA and then to 95% (v/v) ACN, 0.1% (v/v) FA. Full mass spectra were acquired in the Orbitrap analyser in a mass range between m/z 400–2000 and a mass resolution of 60,000 at m/z 400. The five strongest signals were selected for collision-induced dissociation-MS2 acquisition in the LTQ ion trap at a normalised collision energy of 35%. At least two technical replicates of each of the biological replicates were analysed.

Raw data were pooled from three independent biological replicates and was analysed using the Proteome Discoverer software (version 2.2, ThermoFisher Scientific, San Jose, CA, USA) and searched against a customised database containing human and influenza virus A/Puerto Rico/8/1934 (H1N1) reference amino acid sequences (55,836 entries downloaded on 23 June 2018 from the NCBI server, https://0-www-ncbi-nlm-nih-gov.brum.beds.ac.uk/) using the SEQUEST HT search engine (ThermoFisher Scientific, San Jose, CA, USA). The search was set up for full tryptic peptides with a maximum of 3 missed cleavages. The precursor mass tolerance threshold was fixed at 10 ppm with a maximum fragment mass error of 0.8 Da. Carbamidomethyl (C) was set as a static modification and acetylation (K, S), lysine > allysine (K), methylation (K, R) as dynamic peptide modifications. N-terminal acetylation with the dynamic loss of the N-terminal methionine was set as a dynamic protein modification. Proteins were considered identified only when at least two significant peptide hits were detected. Peptide hits were considered significant when passing the adjusted score threshold at a strict False Discovery Rate (FDR) of q < 0.01 as calculated by the percolator algorithm [32]. Protein modifications were considered only if a given modification in a peptide was identified in at least two biological replicates.

3.1. Eight Viral Proteins Were Modified by Acetylation, Methylation and/or Allysine

3.2. Two Hundred and Forty-Five Host Proteins Were Modified at 300 Sites by Methylation, Acetylation, and/or Allysine in Response to IAV Infection

The data presented in this study are available as supplementary material or from the authors upon request.

We thank the University of Otago for doctoral scholarship and the Dept. of Microbiology and Immunology and Putea Tautoko for support to F.A., and Abhishek Kumar for help with MS experiments.

Authors declare no conflict of interest. 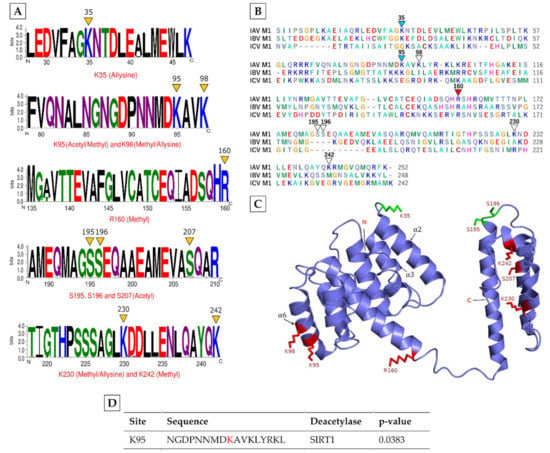 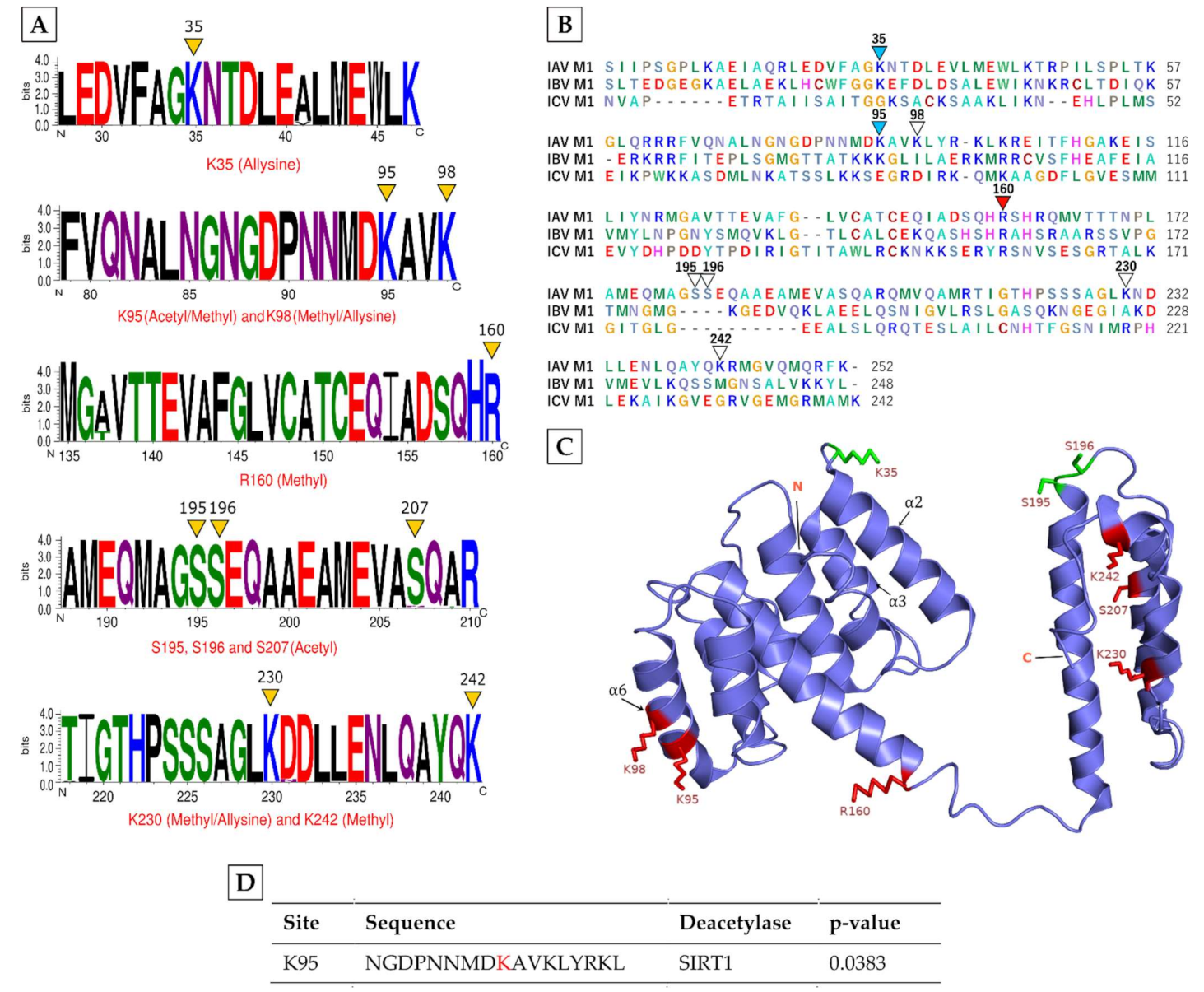 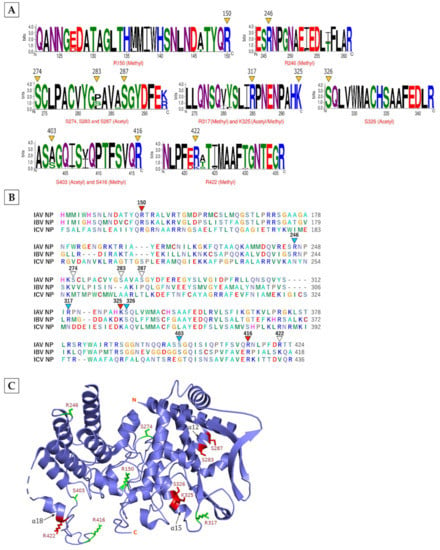 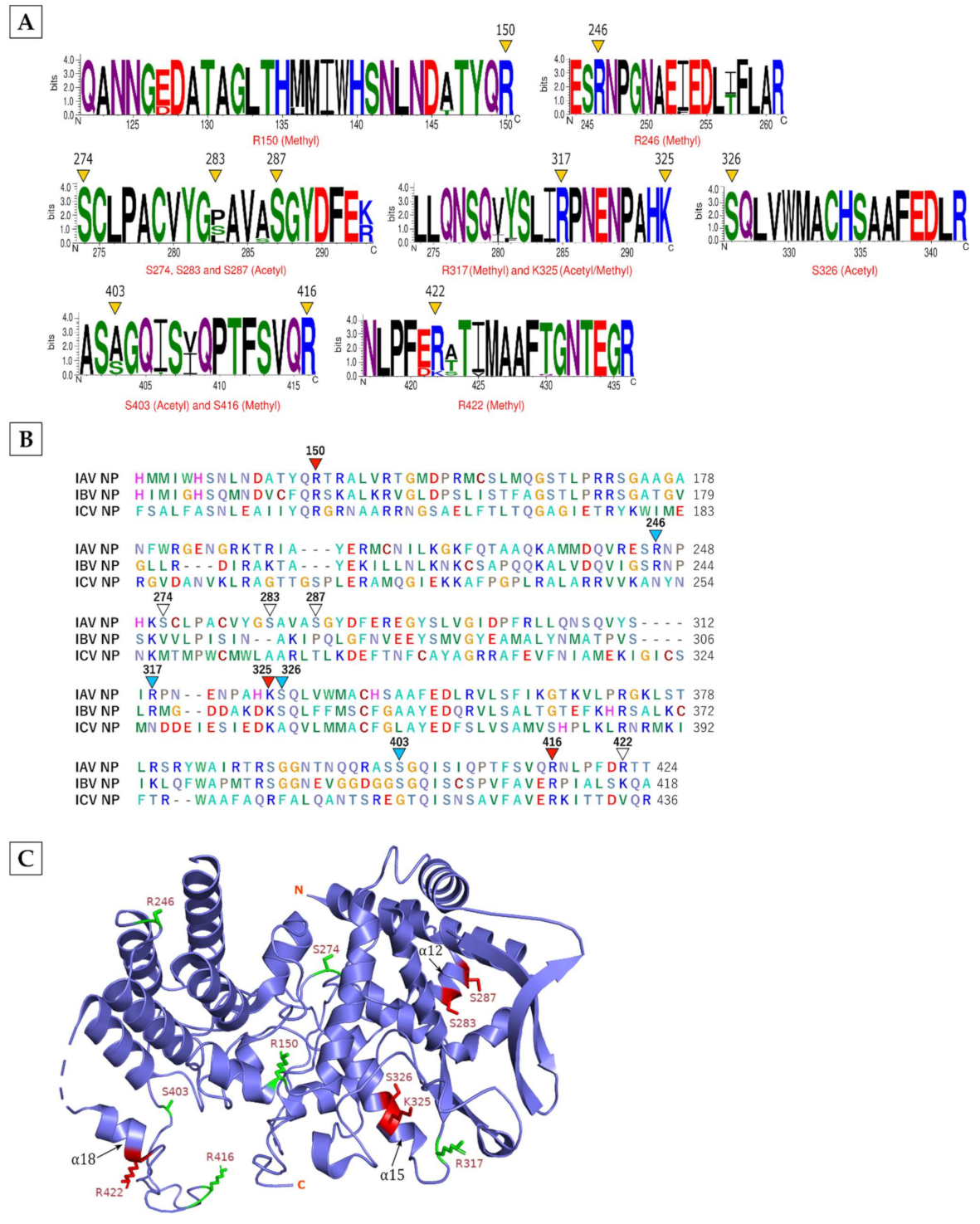 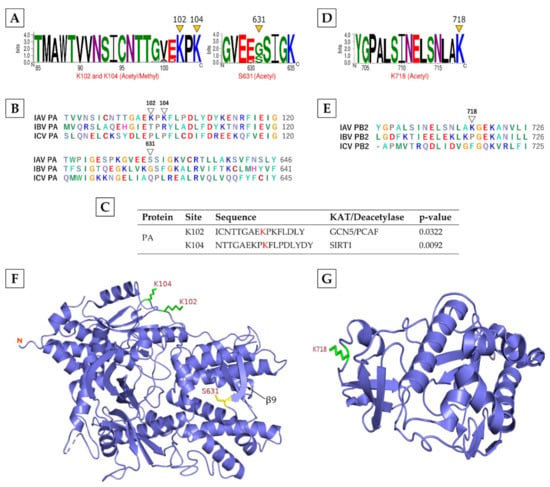 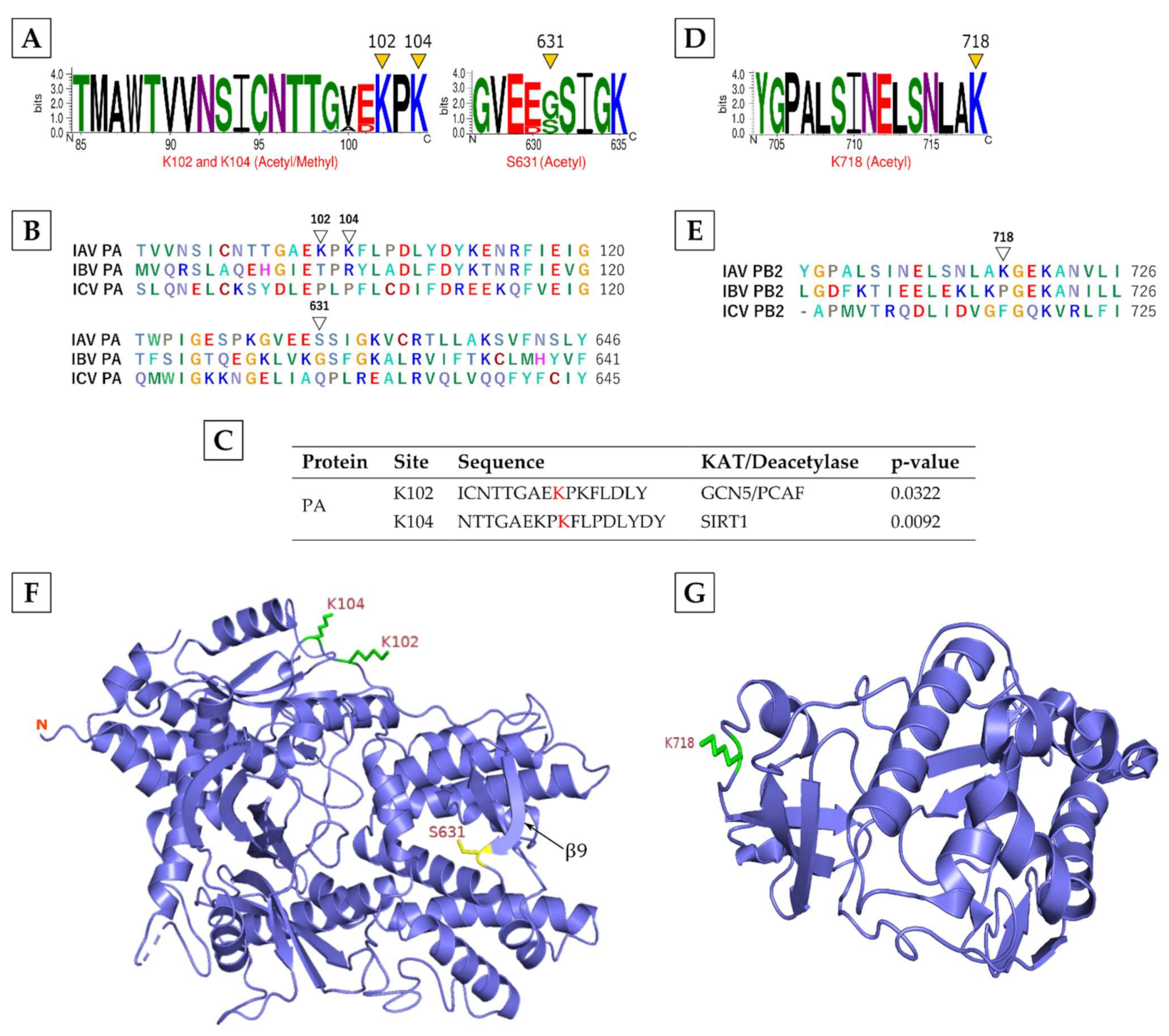 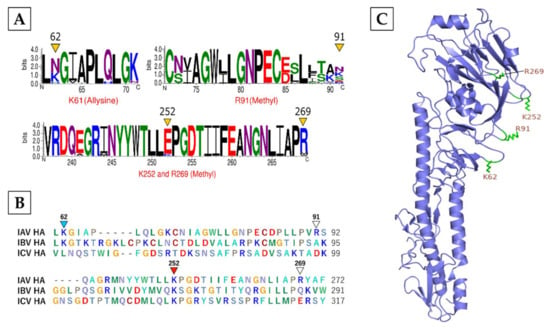 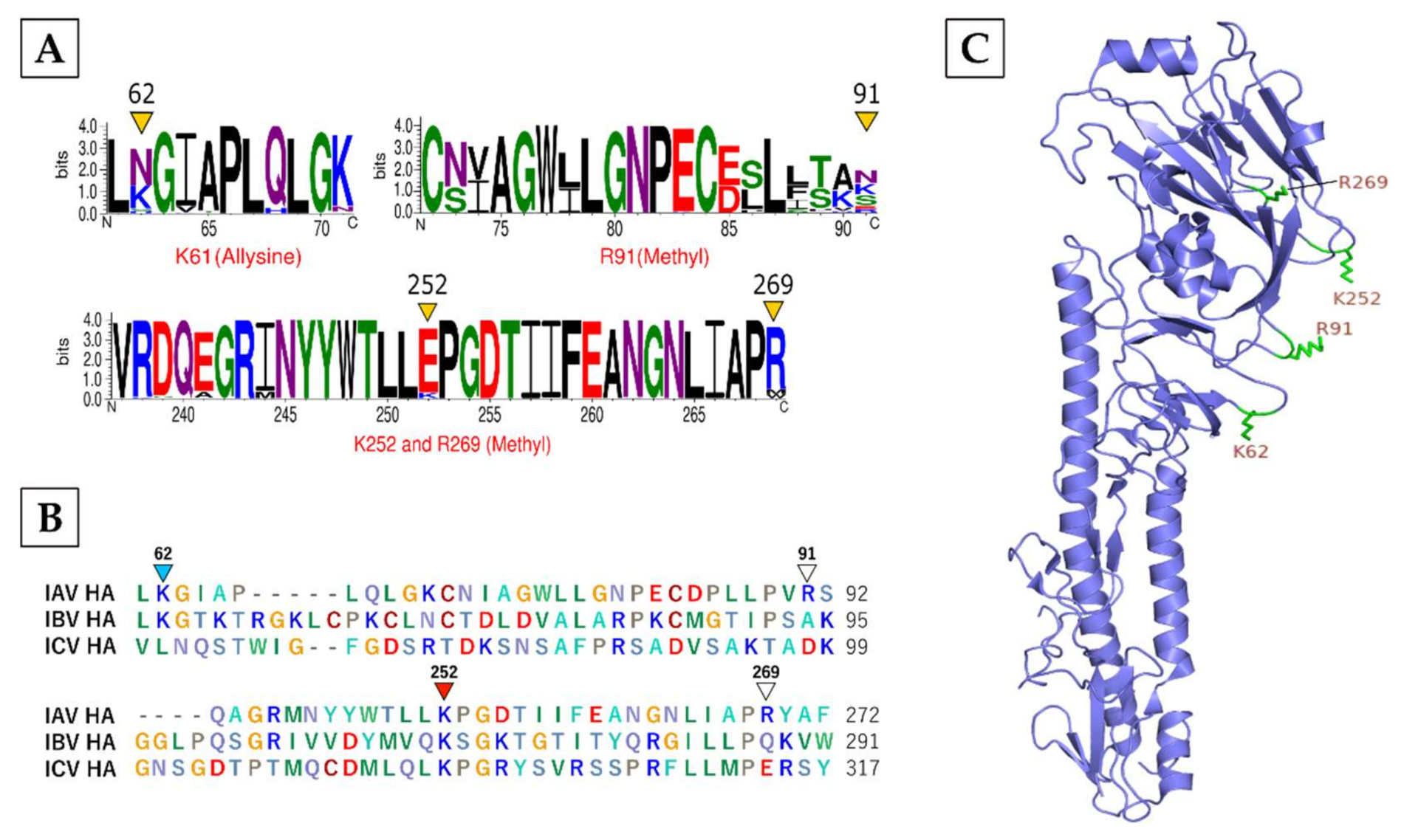 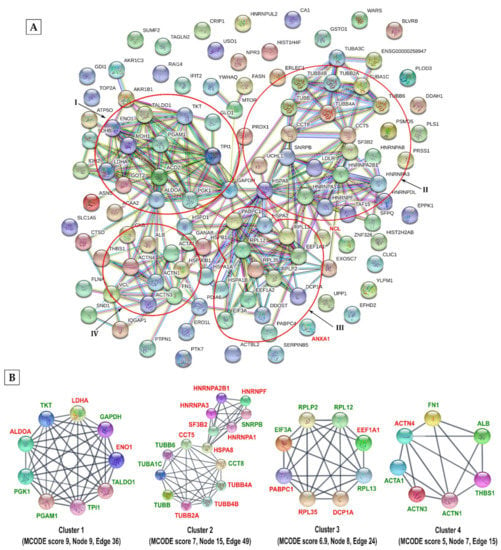 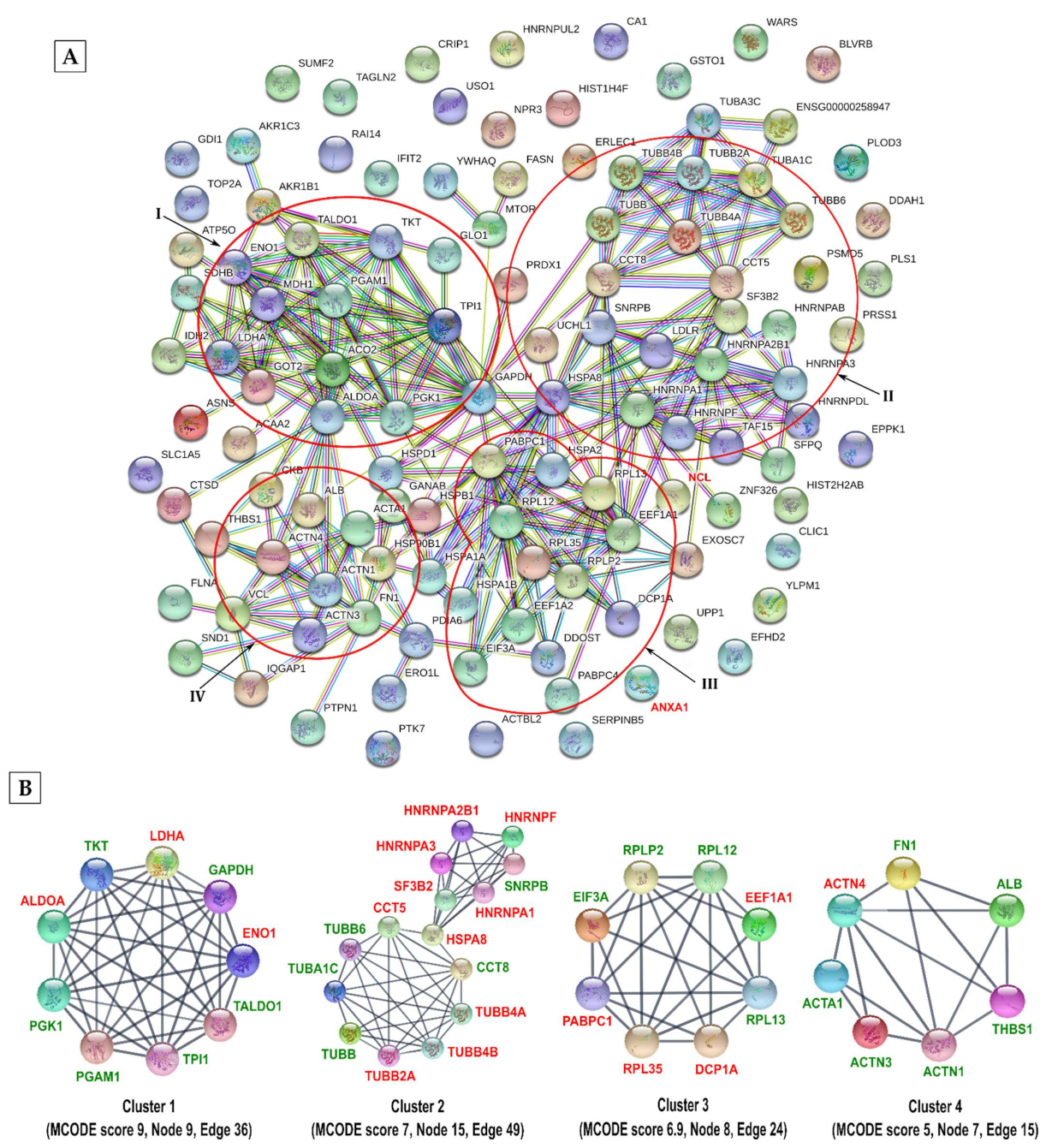 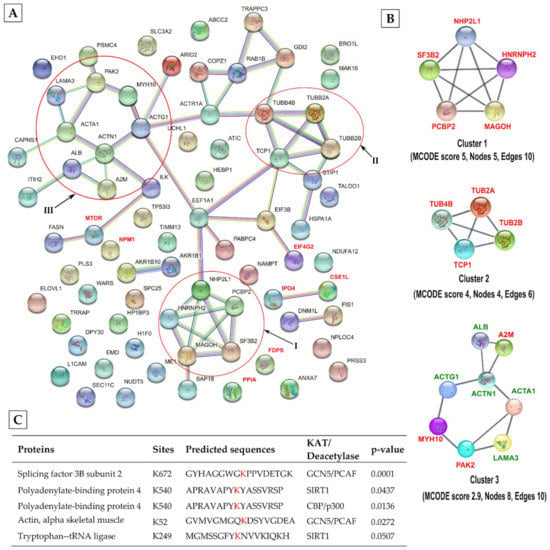 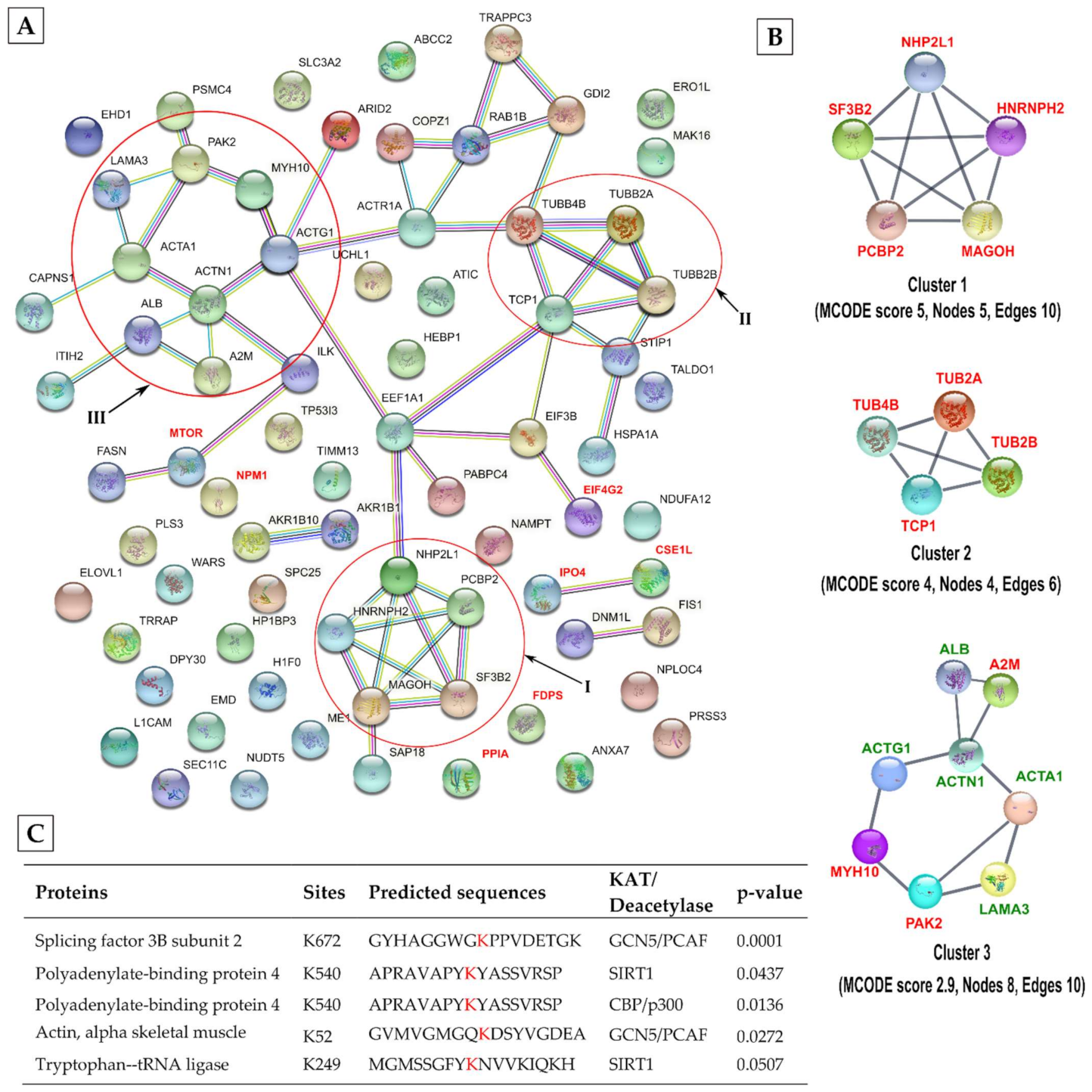