Human bocavirus (HBoV) 1 is considered an important respiratory pathogen, while the role of HBoV2-4 in clinical disease remains somewhat controversial. Since, they are characterized by a rapid evolution, worldwide surveillance of HBoVs’ genetics is necessary. This study explored the prevalence of HBoV genotypes in pediatric patients with respiratory tract infection in Croatia and studied their phylogeny. Using multiplex PCR for 15 respiratory viruses, we investigated 957 respiratory samples of children up to 18 years of age with respiratory tract infection obtained from May 2017 to March 2021 at two different hospitals in Croatia. Amplification of HBoV near-complete genome or three overlapping fragments was performed, sequenced, and their phylogenetic inferences constructed. HBoV was detected in 7.6% children with a median age of 1.36 years. Co-infection was observed in 82.2% samples. Sequencing was successfully performed on 29 HBoV positive samples, and all belonged to HBoV1. Croatian HBoV1 sequences are closely related to strains isolated worldwide, and no phylogenetic grouping based on mono- or co-infection cases or year of isolation was observed. Calculated rates of evolution for HBoV1 were 10−4 and 10−5 substitutions per site and year. Recombination was not detected among sequences from this study.
Keywords: bocavirus; respiratory tract; prevalence; Croatia; phylogeny; recombination bocavirus; respiratory tract; prevalence; Croatia; phylogeny; recombination

Human bocavirus (HBoV) was discovered 16 years ago by Allander et.al. using a new molecular method for screening respiratory samples collected from children who had respiratory tract infection (RTI) of unknown etiology [1]. Additional serological and quantitative PCR research have provided compelling evidence that the newly discovered virus (later classified as HBoV1) acts as an etiologic agent for respiratory tract infections [2,3]. In the following years, three other genotypes (HBoV2-4) were discovered [4,5], primarily from the gastrointestinal tract; therefore, it seems to be involved in pathogenesis of gastroenteritis. Although HBoV2-4 has also been detected in samples from the respiratory tract but with a much lower frequency, their role in the pathogenesis of respiratory infections is unclear.
HBoVs are small viruses up to 26 nm in diameter, nonenveloped, DNA viruses that belong to the Parvoviridae family, Bocaparvovirus genus. Members of two species within Bocaparvovirus genus infect humans: HBoV1 and HBoV3 belonging to the species Primate bocaparvovirus 1, and HBoV 2 and HBoV 4 belonging to the species Primate bocaparvovirus 2 [6]. HBoV possess a linear, single-stranded DNA genome of 5543 nucleotides (nt) long with non-identical terminal hairpins of 140 and 122 nt that play a key role in virus replication [7,8]. Recent advances in molecular biology research of HBoV1 revealed that during its replication in the polarized/nondividing airway epithelial cells HboV1 expresses six nonstructural proteins: NP1, NS1, NS1-70, NS2, NS3, and NS4, depending on splicing mRNAs within ORF 1 [9]. The mRNA spliced at the D2-A2 sites results in a shift of the NS1 ORF at the C-terminus and encodes NS1. Unspliced mRNA that reads the D2-A2 intron encodes the NS1-70 protein, and alternative splicing within the NS1-coding region generates mRNAs that encode NS2, NS3 and NS4 [9]. Moreover, HBoV1 also expresses viral non-coding RNA (BocaSR) and three structural proteins VP1, VP2, and VP3. The BocaSR is the first identified RNA polymerase III (Pol III) transcribed viral non-coding RNA in small DNA viruses [9].
HBoVs are considered to be highly diverse pathogens characterized by a rapid evolution [5,10]; therefore, worldwide surveillance of HBoVs’ genetic evolution is necessary. Although both mutation and recombination are responsible for bocavirus evolution, in a HBoV genome prone to rapid evolution with low level of polymorphisms, recombination seems to play a dominant role [5,11,12].
In this study, we focused on an investigation of the prevalence, phylogenetics, and evolution of HBoVs from pediatric patients with RTI, which will help to reveal the molecular epidemiology and phylogeny of the circulating HBoV in Croatia.

Respiratory specimens obtained from 957 children up to 18 years of age were collected from May 2017 to March 2021. From each patient, nasopharyngeal and pharyngeal flocked swabs were collected, combined, and placed in viral transport medium (UTM™, Copan, Italy). Specimens were immediately transported to the molecular microbiology laboratory at the Public Health Institute, where they were stored at −80 °C until tested. Patients were recruited from two Croatian hospitals: Clinical Hospital Zagreb (n = 736) and General Hospital Karlovac (n = 221), respectively. Inclusion criteria were clinical diagnosis of acute respiratory tract infection (ARI) and need for hospitalization. Exclusion criteria were presumed to be bacterial respiratory infection according to biochemical parameters and healthcare-associated infection. Patients were categorized into the four groups according to age (<1, 1–2.99, 3–4.99 and ≥5 years of age), and two groups regarding the localization of infection (upper respiratory tract infection (URTI) and lower respiratory tract infection (LRTI)), according to the symptoms and signs previously described [13]. Demographic and clinical illness data were retrospectively analyzed by review of patient charts.

Nucleotide sequences of HBoV1 strains were obtained from the GenBank and used to construct alignments and phylogenetic trees. As outgroups, sequences belonging to genotypes HBoV2, HBoV3 and HBoV4, previously described in the literature, were included in the analysis. Alignments were performed using MAFFT [18] and were manually edited with AliView [19]. Phylogenetic trees were generated using the maximum likelihood method with Molecular Evolutionary Genetics Analysis (MEGA) software v6.06. [20], under the most appropriate model of nt substitution determined with jModeltest v2.1.4 [21]. Bootstrap probabilities for 1000 iterations were calculated to evaluate confidence estimates.
The consensus sequences of HBoV strains obtained in this study were deposited in GenBank under acc. Nos. MZ468522-MZ468550.

3.1. Prevalence and Epidemiology of HBoV Infection

Out of 73 HBoV positive samples, 49 (67.1%) samples were available for further analysis, of which 29 sequences could be successfully determined. We first started with the approach to amplify near-complete genomes in one PCR amplicon, which was successful in only five samples (HR1119-19, HR1097-19, HR1223-20, HR142-17 and HR387-18), thus a majority of samples had to be amplified in three overlapping fragments. Out of 49 samples subjected to PCR amplification, 24 samples produced amplicons that cover nearly full HBoV genome and 5 produced amplicons covering two-thirds of the genome. As expected, all samples mapped to HBoV1 reference sequence (acc. no. KP710213). In general, samples had high coverage (an average of 13,048×) (Table 1). Four samples (HR1223-20, HR142-17, HR387-18, HR421-18) had much lower coverage and were additionally analyzed by de novo assembly and running BLAST search for contigs over 400 bp. For all samples, longer contigs mainly contained human sequences (not shown); therefore, assembly could not be improved. Despite lower coverage, we were able to retrieve consensus sequence covering whole amplified region, as the lowest mean coverage of 25× was seen in HR142-17 (Table 1).

The phylogenetic tree was based on 5212 bp of Croatian sequences, along with related sequences retrieved from the database. The tree shows that Croatian HBoV1 sequences are closely related to strains isolated worldwide (e.g., Tunisia, Japan, China, The Netherlands and USA as shown in Figure 2).
There was no phylogenetic grouping based on mono- or co-infection cases or year of isolation. It is also noticeable that sequences are closely related, with only several nucleotide differences and no phylogenetic lineages that can be distinguished with certainty. This was confirmed both at the nucleotide and amino acid level. The identities of our samples ranged from 97.7–99.2 when coding regions were aligned, showing that coding region of VP3 was least conserved (Table 2). The identities were higher at the protein level: NP1 was fully conserved, while NS1, the longest of NS proteins, had five variable sites. Two of these substitutions are shared with the shorter NS1-70 protein, which lacks the C-terminus: variation at sites 580 (between Asp and Asn) and 627 (Ala and Thr), respectively. NS1 had three additional variable sites in the C-terminal part not shared with NS1-70 (Asn647Asp, Pro668Ser/Thr and Thr722Ala).
Among VP proteins, VP3 had only two variable sites, at 305 (Ser and Asn) and 461 (Ser and Thr), respectively. VP1 had an additional variable site outside of the region shared with VP3, at position 17 where Arg and Lys were observed (not shown). The middle VP protein, VP2 uses a non-canonical start codon [24] and was not analyzed separately since its sequence is already covered by analysis of VP1 and VP3.
Only full coding regions were considered for estimation of rates of evolution. For VP1 and VP3 proteins, this included the shared part as well. Calculated rates of evolution show that HBoV1 strains evolve in the range of 10−4 and 10−5 substitutions per site and year: NS1, NP1, VP1 and VP3 had a similar mean rate of evolution, while NS1-70 gene evolves at the rate that resembles complete genome (Table 2). Recombination was not detected among sequences from this study.

This research was funded by the Croatian Science Foundation under the project titled “New and neglected respiratory viruses in vulnerable groups of patients” (grant no. IP-2016-06-7556 to S. Lj.-S), and “Strengthening the capacity of CerVirVac for research in virus immunology and vaccinology“, KK.01.1.1.01.0006, awarded to the Scientific Centre of Excellence for Virus Immunology and Vaccines and co-financed by the European Regional Development Fund.

The study was conducted according to the guidelines of the Declaration of Helsinki and approved by the ethics committee of the Dr Andrija Štampar Teaching Institute of Public Health (protocol code 500-04/15-01/01; date of approval 23 May 2016).

Written informed consent was obtained from all participants (childrens’ parents or their legal guardians).

Data is contained within the article and Supplementary Material. 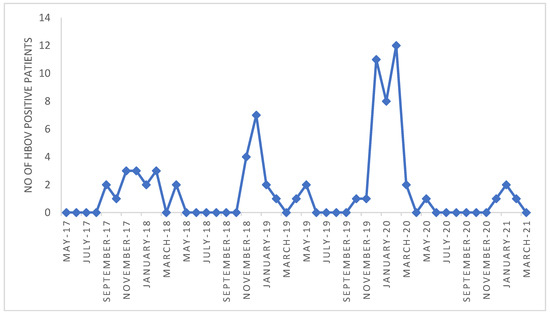 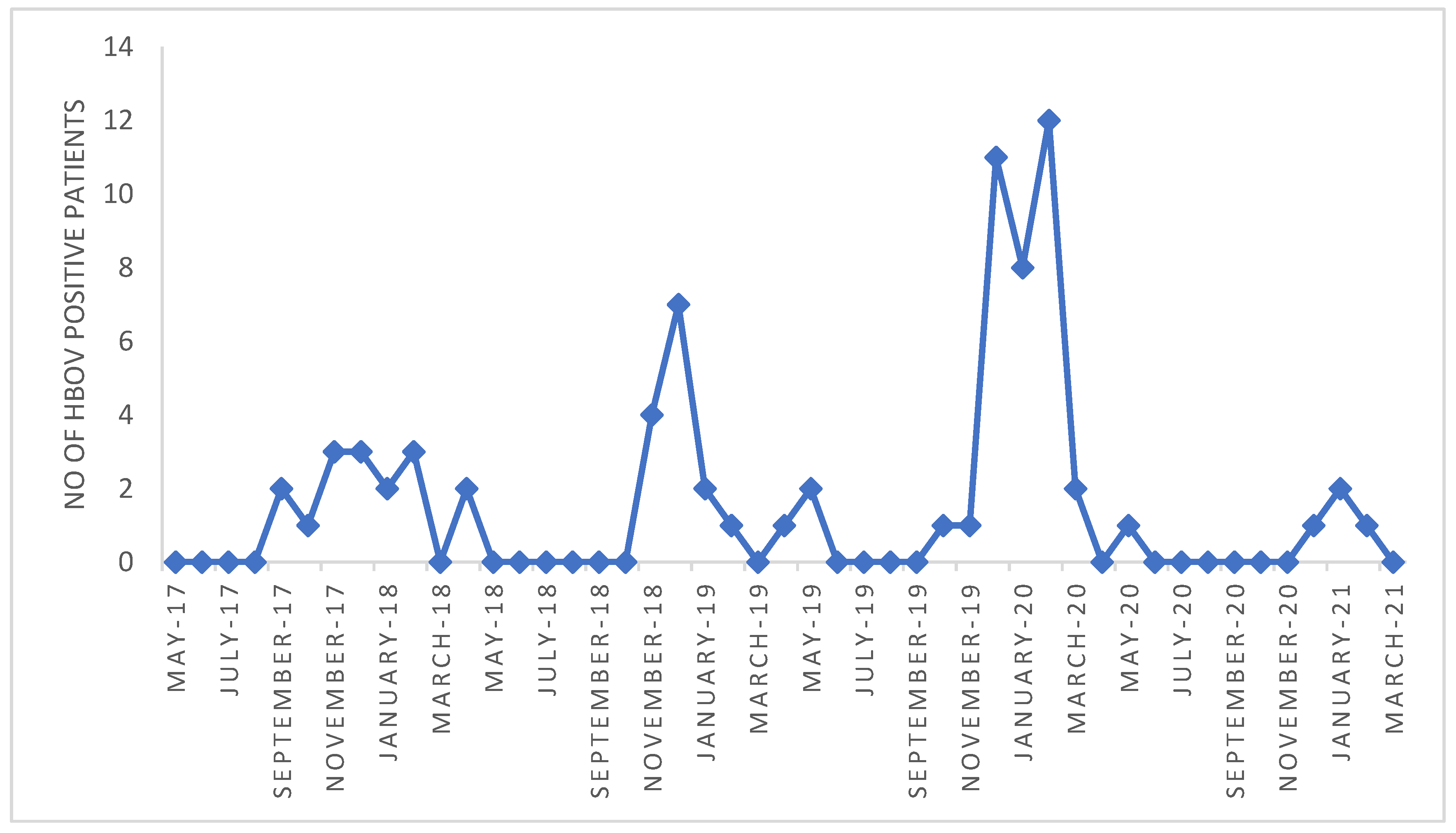 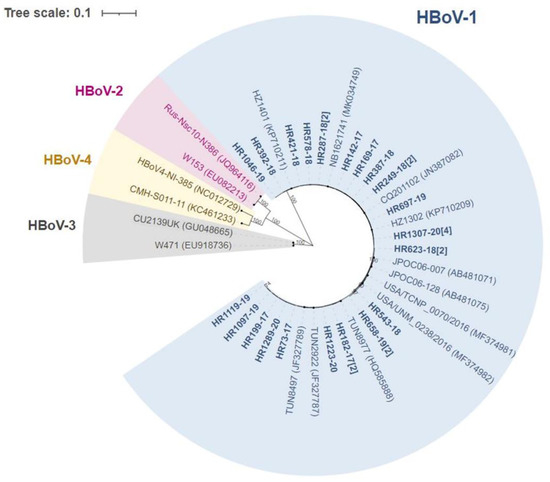 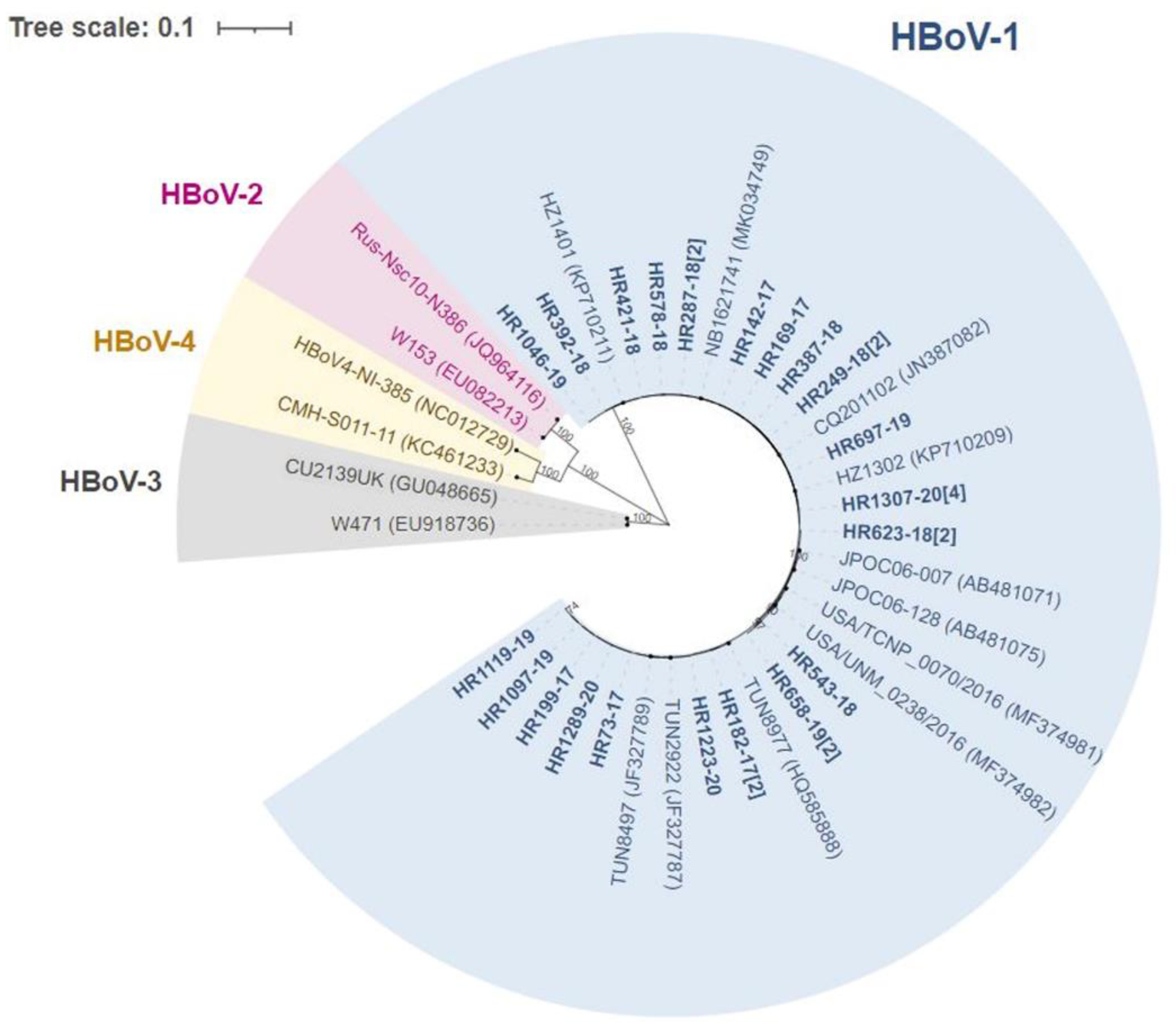