To gain comprehensive genetic information of circulating avian coronavirus infectious bronchitis virus (IBV) isolates in China, analysis of the phylogenetic tree, entropy of the amino acid sequences, and the positive selection as well as computational recombinations of S1, M and N genes of 23 IBV isolates was conducted in the present study. The phylogenetic trees based on the S1, M and N genes exhibited considerably different topology and the CK/CH/LSC/99I-type isolates were the predominant IBVs based on the phylogenetic analysis of S1 gene. Results of entropy of amino acid sequences revealed that the S1 gene had the largest variation; the M gene had less variation than the N gene. Positive selections were detected in not only S1 but also M and N gene proteins. In addition, five S1 gene recombinants between vaccine strain 4/91 and CK/CH/LSC/99I-type field isolate were confirmed. In conclusion, multiple IBV genotypes co-circulated; genetic diversity and positive selections existed in S1, M and N genes; 4/91 vaccine recombinants emerged in China. Our results show that field IBVs in China are continuing to evolve and vaccine strains may have an important role in the appearance of new IBV strains via recombination. In addition, the present study indicates that IBV evolution is driven by both generations of genetic diversity and selection.
Keywords: infectious bronchitis virus; genetic variation; phylogenetic tree; entropy; positive selection; recombination infectious bronchitis virus; genetic variation; phylogenetic tree; entropy; positive selection; recombination

Infectious bronchitis (IB) is an acute, highly infectious and contagious disease of domestic chickens worldwide caused by avian infectious bronchitis virus (IBV), a member of genus Gammacoronavirus, subfamily Coronavirinae, family Coronaviridae [1]. IB affects chickens of all ages and IBV replicates primarily in the respiratory tract, and also in some epithelial cells of the kidney, gut and oviduct, resulting in reduced performance, reduced egg quality and quantity, increased susceptibility to infections with other pathogens, and condemnations at processing [2]. Multiple IBV serotypes or genotypes have been identified worldwide and different serotypes of IBVs confer little or no cross-protection against the others.
IBV genome consists of a linear, single-stranded, positive-sense RNA of 27.6 kb, which encodes four major structural proteins, the spike (S) glycoprotein, the membrane (M) glycoprotein, the nucleocapsid (N) protein and the envelope or small membrane (E) protein [3]. The S glycoprotein is post-translationally cleaved into S1 and S2 subunits and S1 is the most divergent region, which carries conformationally-dependent virus-neutralizing and serotype-specific epitopes [4,5]. The N protein located in the capsid of the virion is involved in RNA replication, assembly and carries group-specific antigenic determinants [6] and has high immunogenicity, readily inducing antibodies and cytotoxic T-lymphocyte immunity in chickens [7]. S1 and N genes have been used most frequently to determine the relatedness of emerging strains of IBV [5,8]. The M protein is a structural membrane protein and plays an important role in the viral assembly process and particularly is indispensable for many biological functions including viral core stability. Interactions of M and E proteins are important for virus budding and formation of virus-like particles, which are involved in mucosal immunity [9].
The genetic diversity and viral evolution of IBV are mainly monitored by analysis of the S1 gene because of its high variability and close serotype correlation [10], but viruses within the same serotype can have a high degree of genetic variability outside of the spike gene [11]. Pathogenicity of IBV is associated with the spike gene as well as genes outside of the spike gene [12]. The M protein is associated with virus assembly and change this protein will affect the efficiency of virus particles formation and subsequent transmission of the virus [3]. The N protein plays an important role in viral replication, assembly, and immunity. In addition to S1 glycoprotein, the N protein could represent an important target in the prevention of IB outbreaks [13]. Recent evidence revealed that there are significant variations in the N and M genes between strains [13,14]. Therefore, it is necessary to analyze multiple genes especially to analyze the genetic variation of S1, M and N genes considering their importance as structural proteins.
The major challenge for the prevention and control of IB is the increasing number of new serotypes or variants of IBV, which was caused by frequent gene mutation and recombination [15,16,17,18]. Recombination is thought to be a contributing factor in the emergence and evolution of IBV or even the emergence of new coronaviruses and new diseases [3]. The studies of IBV recombination are very important for IBV control, because they will further our understanding of the diversity and evolution mechanisms of these viruses and thus enable the development of better control methods [3,18].
IBV strains within a geographic region are unique and distinct [19] although many countries share some common antigenic types. Therefore, it is extremely critical to identify the prevalence of IBVs and genetic characteristics of circulating strains in a region or a country in order to develop effective vaccines for the control of the disease. Outbreaks of IB have been occurring frequently in China in spite of intensive vaccinations for many years [15,17,20,21,22]. IB is still a major problem in Guangxi province [15,17], which is located in southern China and produces a total of 700 million birds per year and ranks third in China [23]. It is very important to know the genetic characteristics of prevalent strains of IBVs in this region. We previously reported the genotype diversity of Guangxi IBV isolates based on the hypervariable region I (HVR I) of S1 gene [15], but the available comprehensive genetic information of circulating IBV strains in this region was limited. Therefore, in the present study we performed the analysis of the phylogenetic tree, of the entropy of the amino acid sequences, of positive selection as well as of computational recombination based on the sequencing results of the viral structural protein genes S1, M and N in order to provide molecular epidemiology information of IBV and to lay a good foundation for the control of IB in the field.

2.1. Alignment Analysis of Nucleotide and the Deduced Amino Acid Sequences

Both the phylogenetic trees constructed with the Neighbor-joining and Maximum-likelihood method had very similar topography, so only the Neighbor-joining trees are shown (Figure 1). The phylogenetic trees based on S1 gene amino acid sequences showed that all IBV isolates except GX-C were divided into five distinct groups (Figure 1a). Eleven out of 23 isolates were grouped into the CK/CH/LSC/99I-type with China IBV reference strains CK/CH/LSC/99I, SAIBK and A2, which were isolated during 2004–2008. Isolates GX-NN7, GX-NN11, GX-NN9, GX-NN10, GX-NN8, GX-YL7 and reference vaccine strain 4/91 were classified into the 4/91-type, but the latter five isolates occupied another offshoot. GX-YL6 and reference strains LDT3, Partridge/GD/S14/2003 and Korea strain KM91 were grouped as the tl/CH/LDT3/03-type. Amazingly, GX-G and GX-XD isolated in 1988 were grouped with Taiwan reference strains TW2296/95, TW2575/98 as Taiwan-type. Isolates GX-NN1 and GX-NN2 showed a close relationship with commonly used vaccine strains H120, H52, Ma5, M41 and other China vaccine strains W93, H94, D41, IBN, HK and grouped as Mass-type. GX-C, isolated in 1985, showed considerable low homology with the above five genotypes and belonged to a separate group. 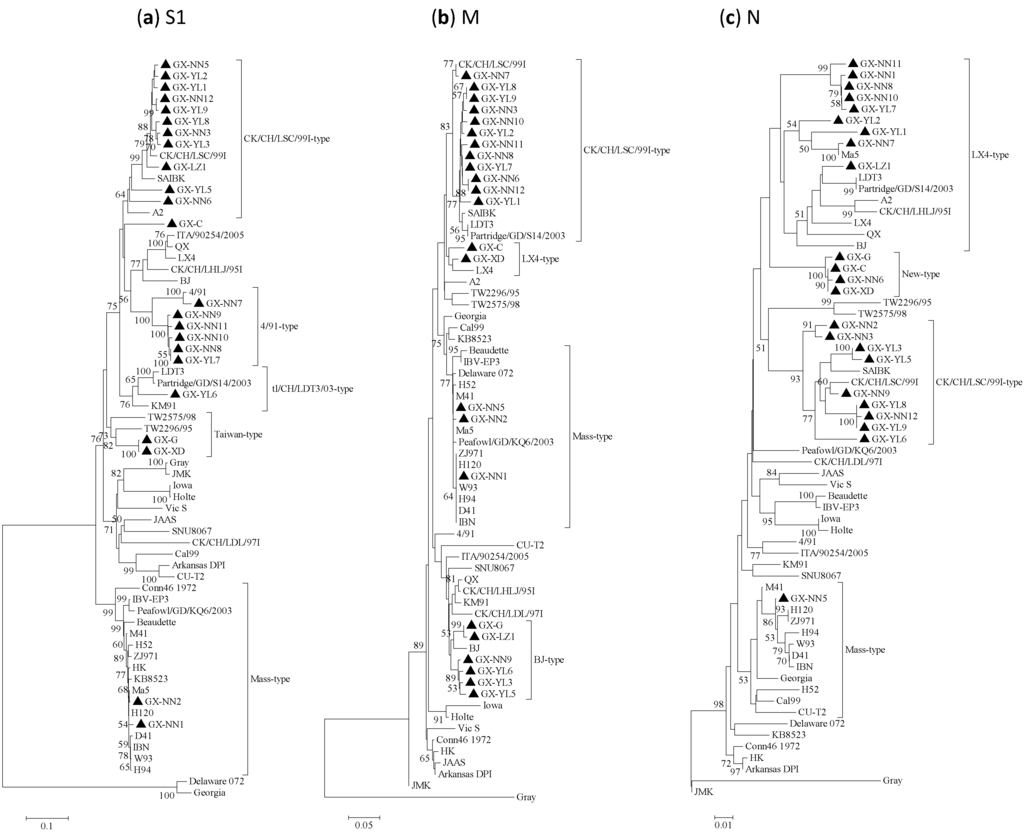 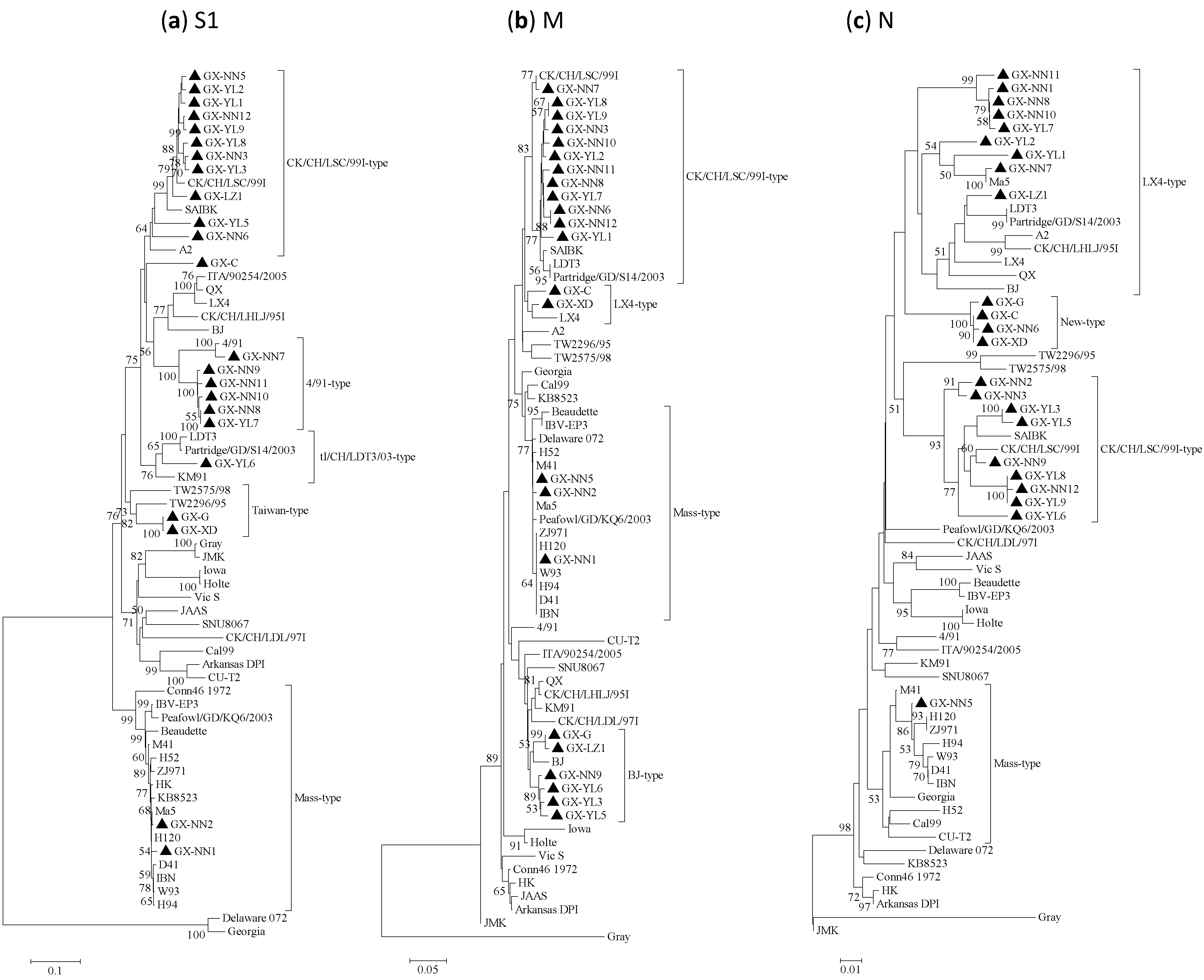 2.3. Positive Selection on the S1, M and N Proteins of IBVs 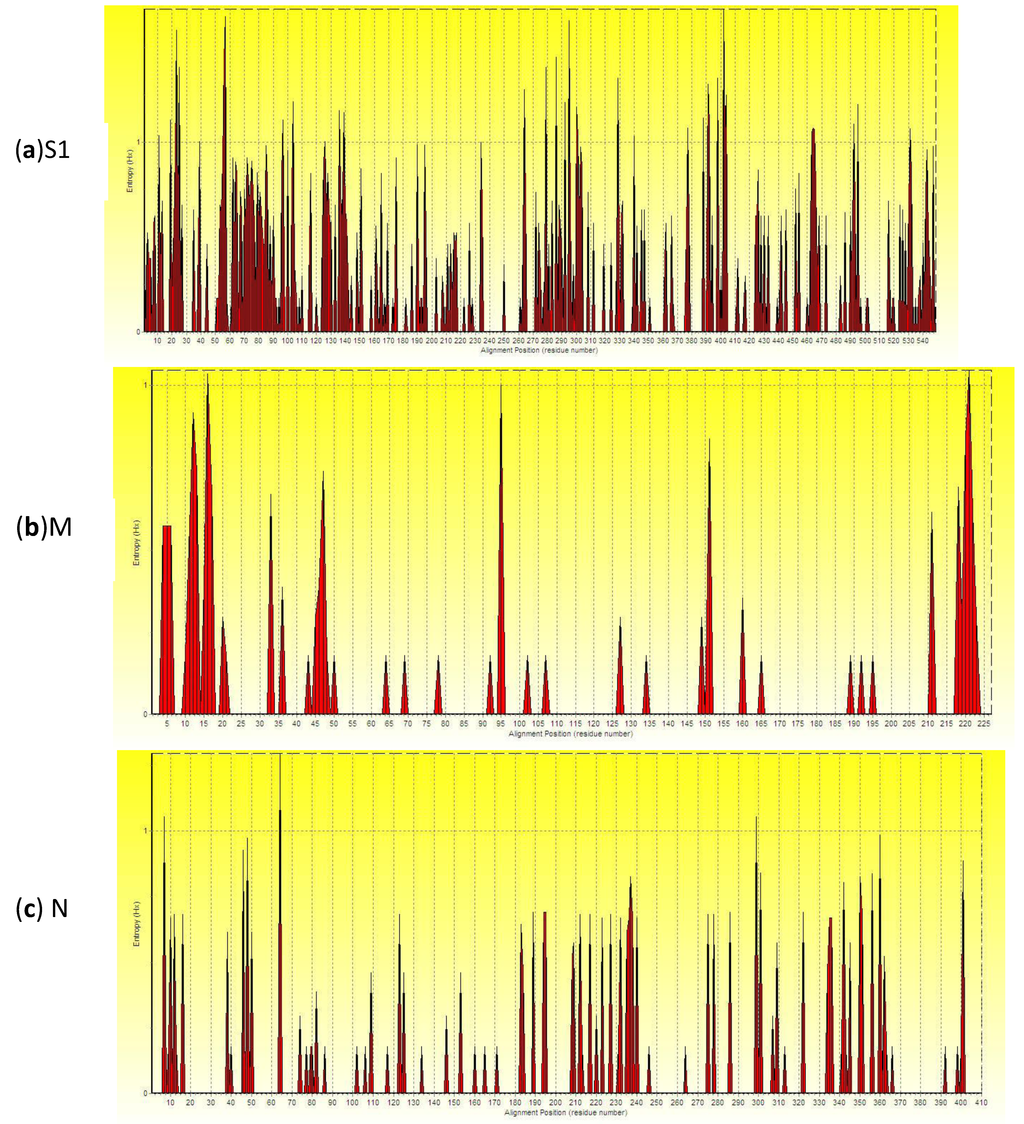 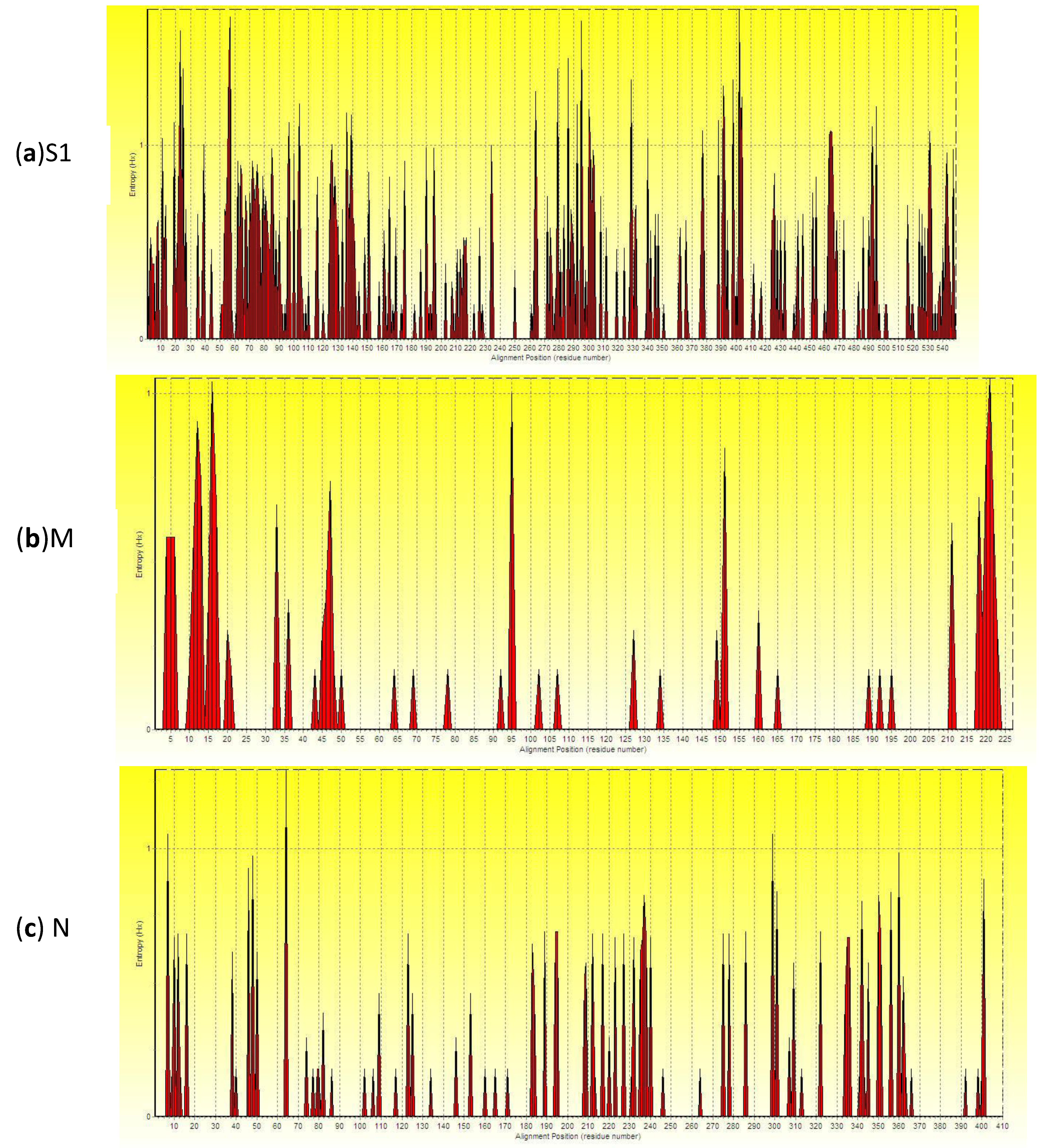 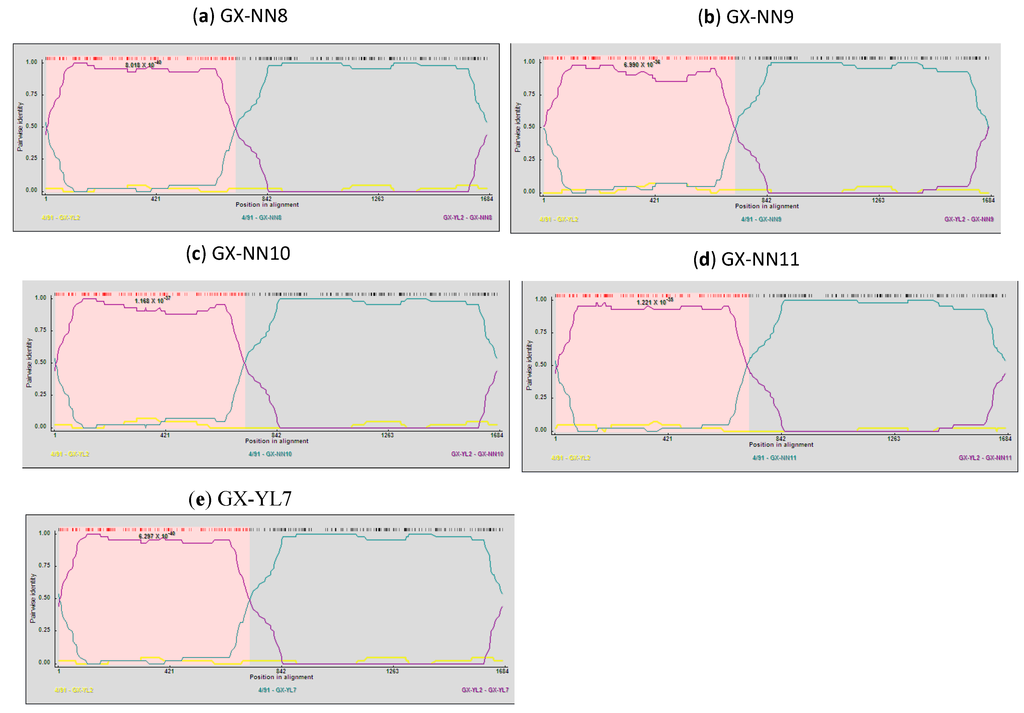 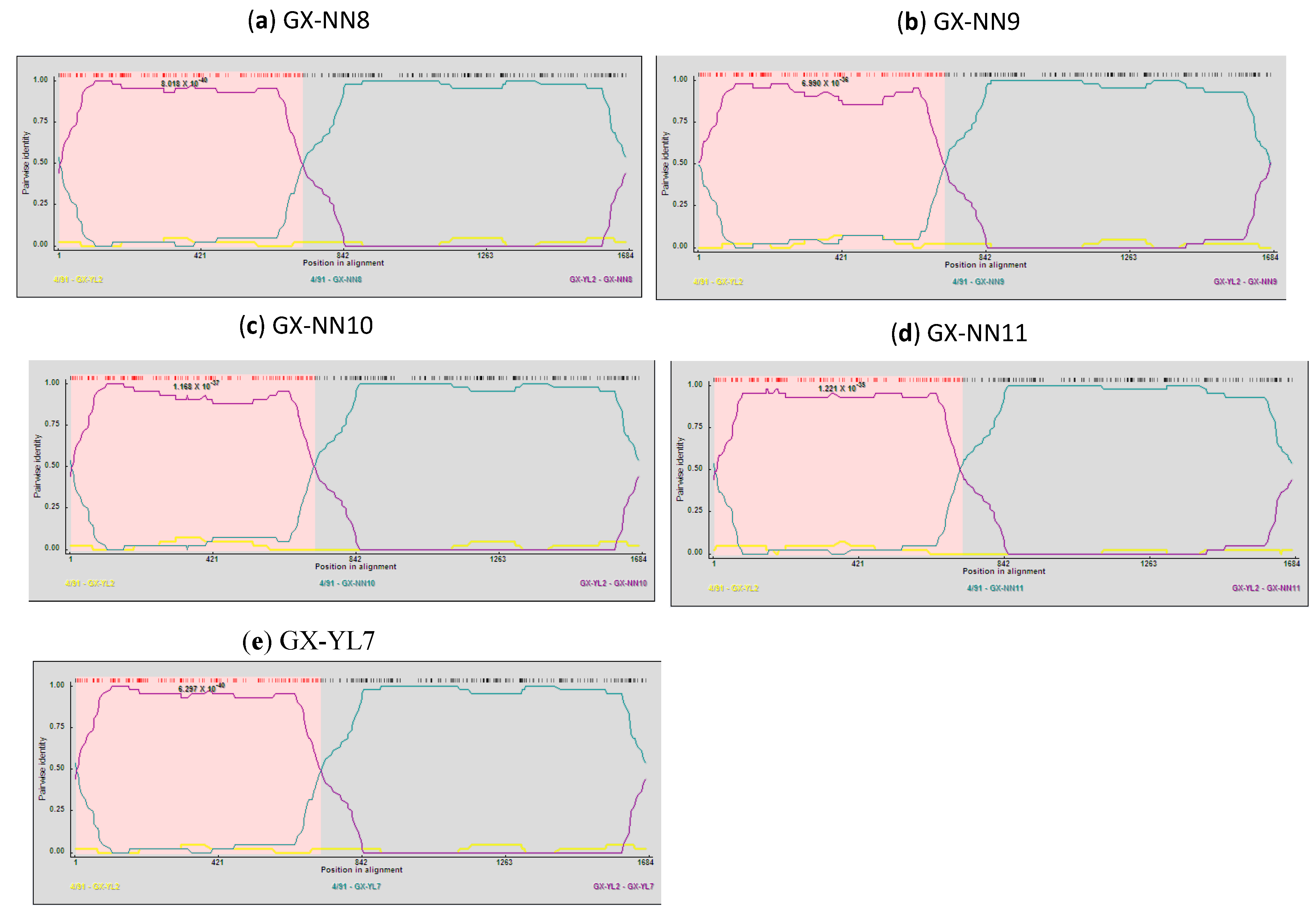 Twenty-three IBV strains, isolated as previously described [15] were analyzed in the present study. The IBV field isolates were propagated in 9 to 11-day-old specific pathogen free embryonated chicken eggs via the allantoic cavity route. Allantoic fluids were harvested at 48 h post-inoculation, frozen, and stored at −70 °C until used.

4.3. RNA Extraction and Amplification of S1, N and M Genes

The PCR products were purified, cloned and then sequenced by Sangon Bio-company (Shanghai, China). For each gene, three independent clones were selected randomly and sequenced twice from both directions. The open reading frames of S1, M and N gene were determined using the DNAstar version (DNAStar, Madison, WI). The nucleotide sequences of S1, M and N genes have been submitted to GenBank database and assigned accession numbers (Supplementary Table S2). The nucleotide and the deduced amino acid sequences alignments were generated using the ClustalW Multiple Alignment method of BioEdit version 7.0.9.0 and compared with those of 42 reference IBV strains retrieved from the GenBank database with the accession numbers listed in in supplementary material (Supplementary Table S3). Phylogenetic trees were constructed based on the amino acid sequences of S1, M and N genes with the Neighbor-joining method (Jones-Taylor-Thornton (JTT) model) and Maximum-likelihood method (JTT model) using MEGA 5.05 version. The bootstrap values were determined from 1000 replicates of the original data.

4.5. Analysis of Entropy of Amino Acid Sequences and Positive Selection

The entropy is one useful quantification of diversity in a single position of amino acid sequences. A large entropy means the amino acid in the given position is prone to be substituted. In order to understand the variation degree of S1, M and N genes, the entropy of aligned amino acid sequences within these genes of the isolates was calculated by BioEdit version 7.0.9.0. In addition, codon-based tests of positive selection (Z-test, MEGA5) were used to estimate the numbers of non-synonymous and synonymous substitutions per site (dN/dS ratio) within the S1, M and N proteins in order to understand whether these proteins are submit to positive selection.4.6. Computational Recombination Analysis.
Aligned nucleotide sequences of S1, M and N genes were analyzed with the Recombination Detection Program (RDP4, Version 4.14) to detect potential within-gene recombination events. The window size was adjusted to 40 bp from the default setting 30 bp because IBV has a high mutation rate, which can mask recombination signals. The highest acceptable P value was 0.05 and the detection of recombination events was applied between sequences sharing 0 and 100% identity. Seven algorithms in RDP 4.14, including RDP, GENECONV, BootScan, MaxChi, Chimaera, SiScan and 3Seq were used to confirm the recombination events. Two phylogenetic trees, which were constructed from the portion of the alignment between the inferred breakpoints and the remainder of the alignment were made and compared to assess recombination events further. Recombination events and recombination breakpoints were further confirmed by Similarity plot and BootScan analyses using the SimPlot program (version 3.5.1.).

In conclusion, multiple IBV genotypes co-circulated; genetic diversity and positive selections existed in S1, M and N genes; 4/91 vaccine recombinants emerged in China. Our results show that field IBVs in China are continuing to evolve and vaccine strains may have an important role in the appearance of new IBV strains via recombination. In addition, the present study indicates that IBV evolution is driven by both generations of genetic diversity and selection.