Molecular Characterization and Phylogenetic Analysis of New Variants of the Porcine Epidemic Diarrhea Virus in Gansu, China in 2012

Porcine epidemic diarrhea virus (PEDV), a member of Coronaviridae, is an enveloped, single-stranded RNA genome with a 5' cap and a 3' polyadenylated tail. The size of its genome is approximately 28 Kb [1]. The genome comprises a 5' untranslated region (UTR); a 3' UTR; at least seven open reading frames (ORFs) that encode four structural proteins, namely, spike (S), envelope (E), membrane (M), and nucleocapsid (N); and three non-structural proteins, namely, replicases 1a and 1ab as well as ORF3 [2]. The PEDV S protein is a type I glycoprotein composed of 1,383 amino acids (aa). Similar to other coronavirus S proteins, the PEDV S protein is a glycoprotein peplomer (surface antigen) on the viral surface and contains four neutralizing epitopes (499–638, 748–755, 764–771, and 1,368–1,374 aa) [3,4,5]. The PEDV S protein has a pivotal function in regulating interactions with specific host cell receptor glycoproteins to mediate viral entry [6]. Thus, the S glycoprotein is a primary target for the development of vaccines against PEDV. The S glycoprotein is also the major envelope glycoprotein of the virion, which serves as an important viral component to understand the genetic relationships of different PEDV strains and the epidemiological status of PEDV in the field [2,7,8,9].
Porcine epidemic diarrhea (PED), caused by PEDV, is an acute, highly contagious, and devastating swine disease that is characterized by acute enteritis and lethal watery diarrhea, followed by dehydration frequently leading to high mortality in piglets [10,11]. PED was first observed among English fattening pigs in 1971 [10] but has increasingly become a problem in several Asian countries, including Korea [12], China [8,9,13], Japan [14], and Thailand [15]. In China, PEDV was first isolated in 1973 [9]. Almost two decades later, its prevalence has become a problem of the swine industry in China, but until 2010, the prevalence of PEDV infection was relatively low with only sporadic outbreaks. However, in late 2010, a remarkable increase in PED outbreaks occurred in the pig-producing provinces [9,16]. PED that occurred in several porcine farms and caused severe economic loss between January 2012 and March 2012 in Gansu Province, China was investigated in this study. The affected pigs exhibited watery diarrhea, dehydration, and thin-walled intestines. The disease progressed to death within four days. Pigs of all ages were affected and exhibited diarrhea and loss of appetite with different degrees of severity, which were determined to be age dependent. Among the suckling piglets, 100% became ill. Pigs >7 days of age experienced mild diarrhea and anorexia, which completely resolved within a few days. To identify the PEDV strain(s) responsible for the recent outbreak in Gansu, where located in west China, the east by Shanxi province, the south of Sichuan province, the west of Xinjiang province, and the north of Inner Mongolia province, we sequenced the full-length S gene of the isolates obtained from the diarrhea samples collected from pigs in two affected pig farms. One farm named Yongjing Tai Chi Breed Co., Ltd (Yongjing, China), and another named Hoggery of Science and Technology Breed Park of Jiugang Hongfeng Company (Jiayuguan, China).

2.1. Sequence Analysis of the S Gene 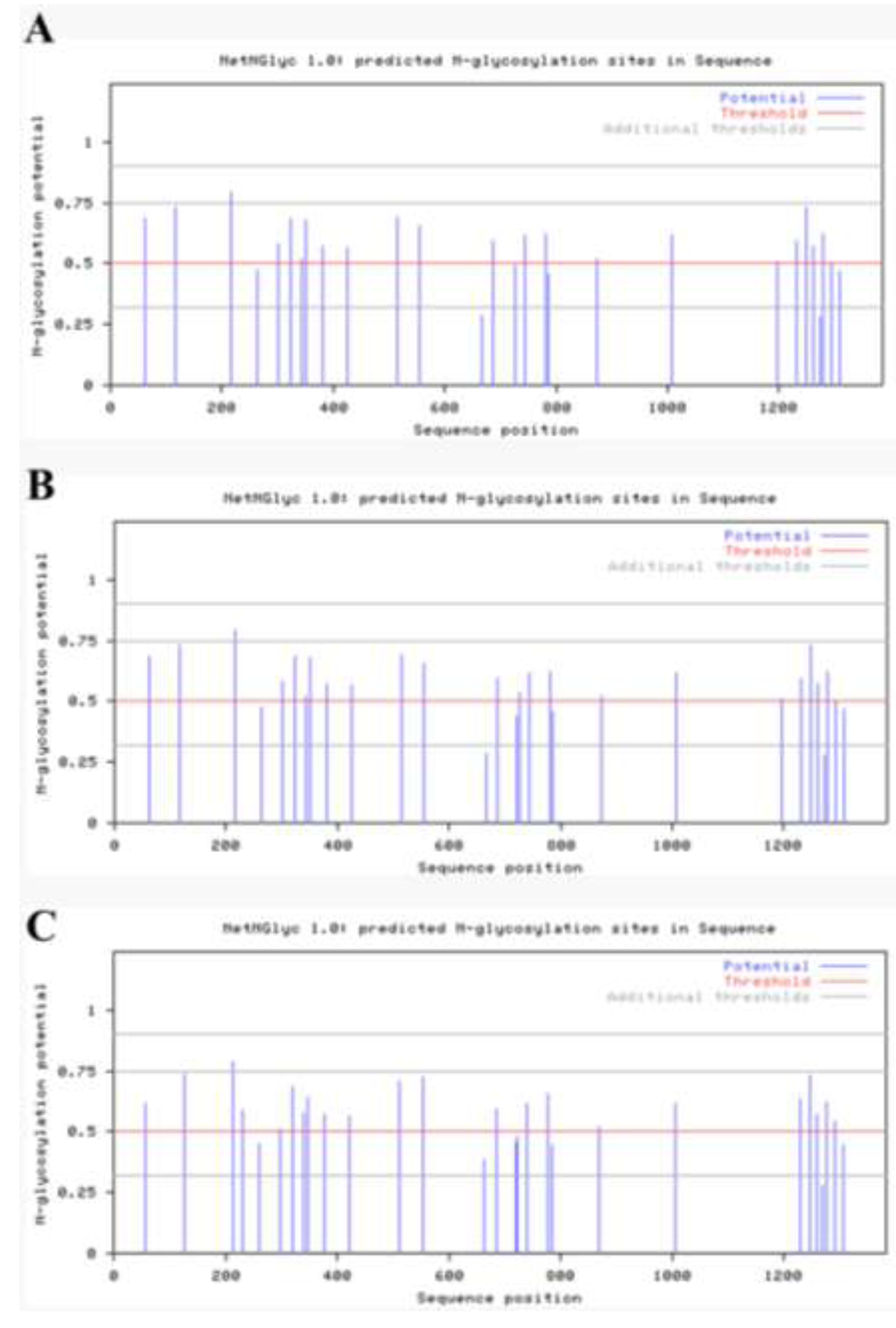 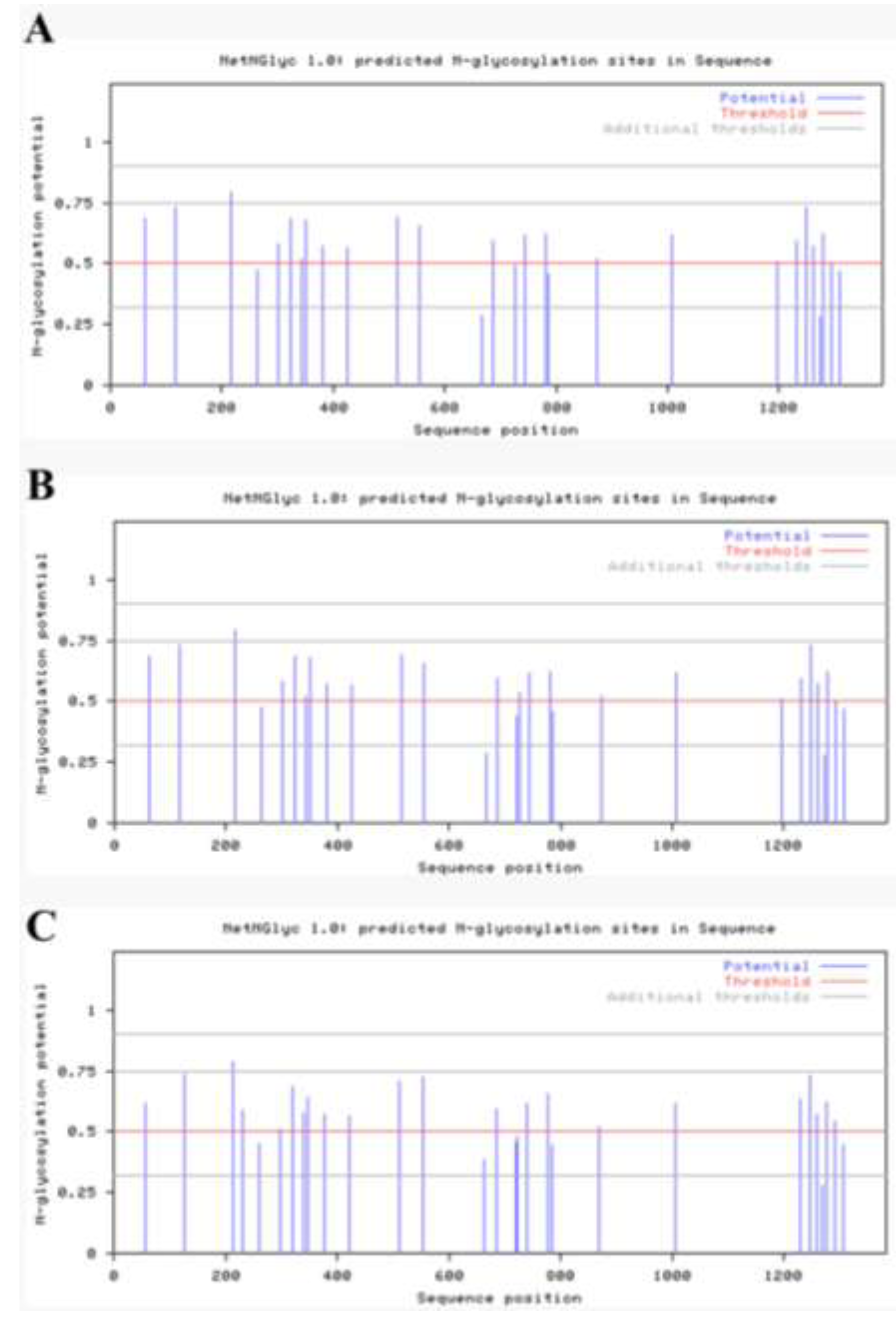 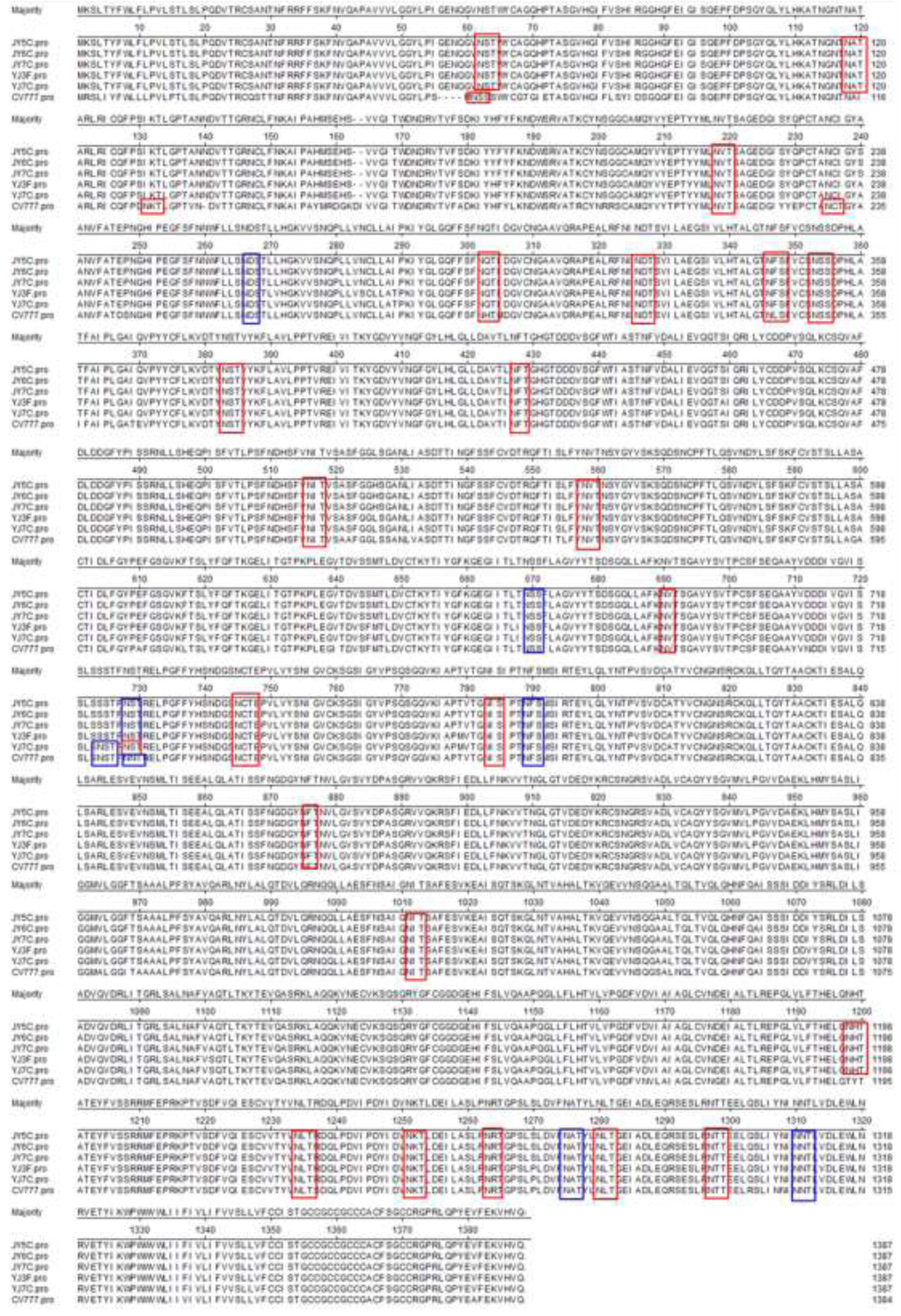 Table 2. The S genes’ nucleotide and deduced amino acid identities of five strains from our study (JY5C, JY6C, JY7C, YJ3F, and YJ7C) with the other PEDV reference strains.

2.3. Phylogenetic Analysis of the S Gene

2.4. Antigenicity Analysis of the S Gene 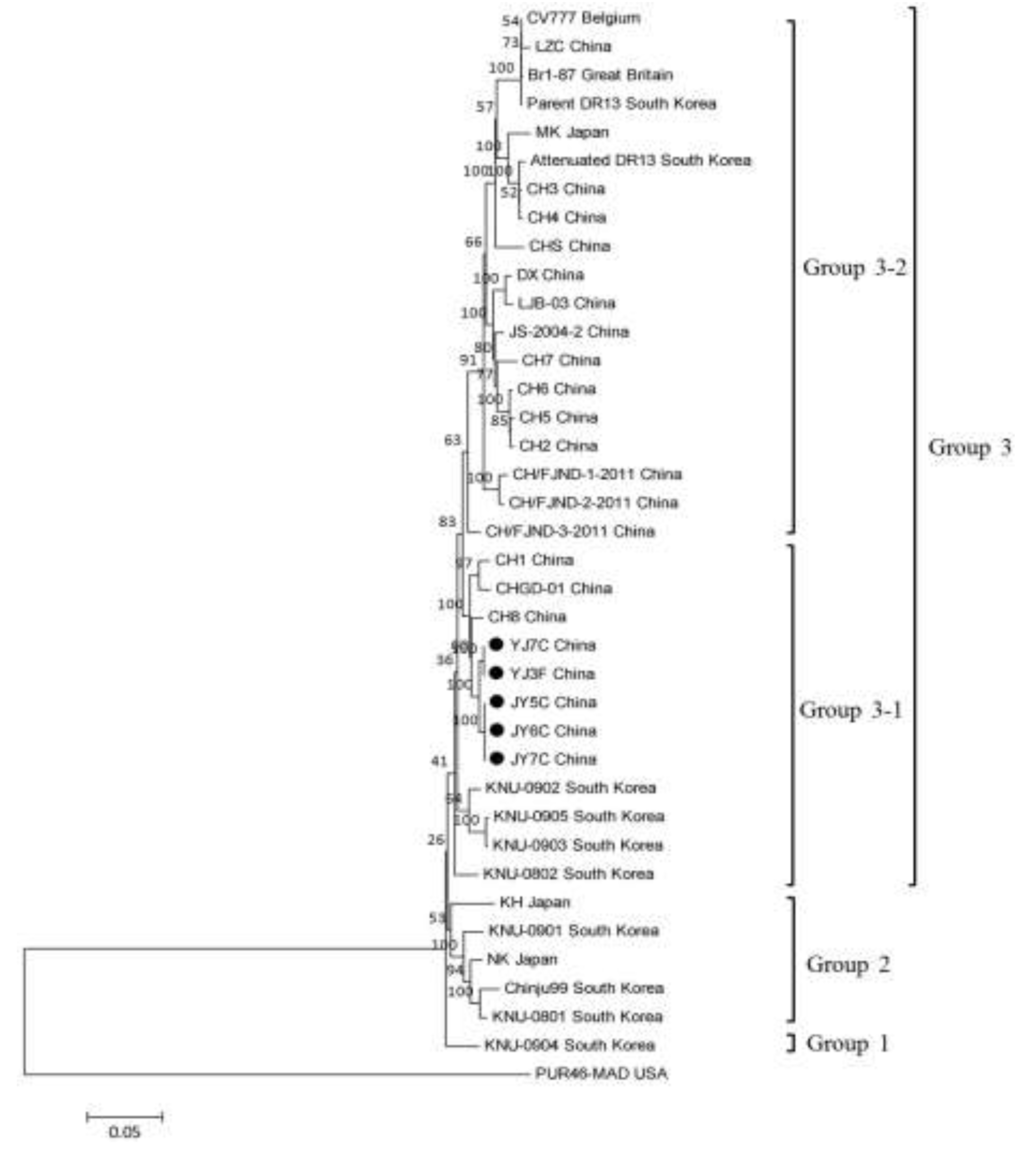 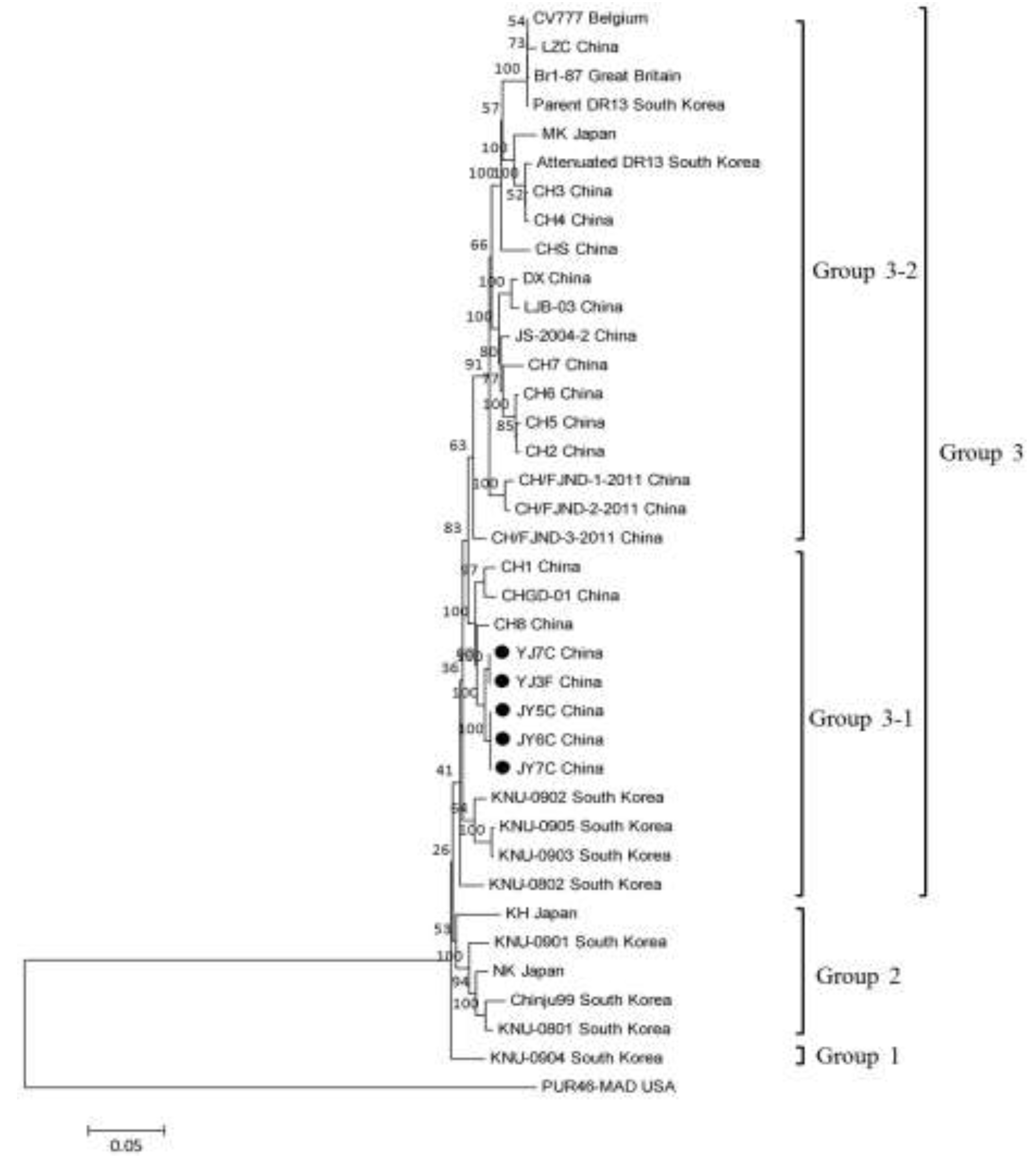 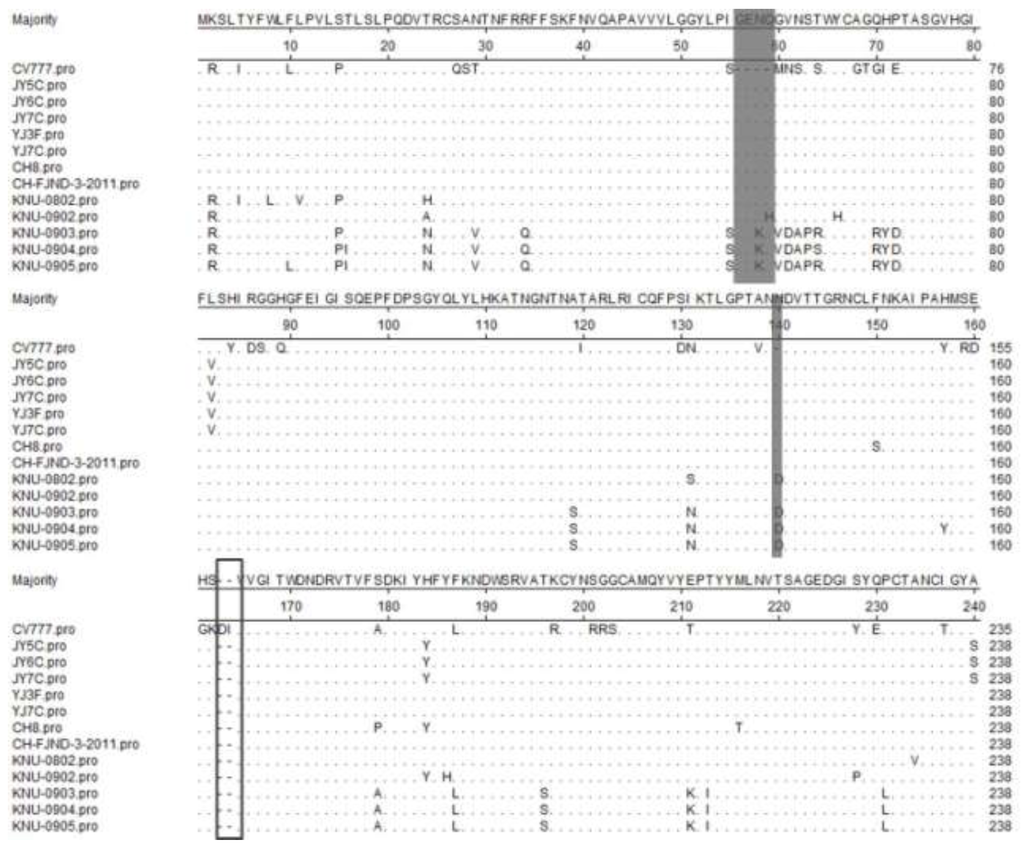 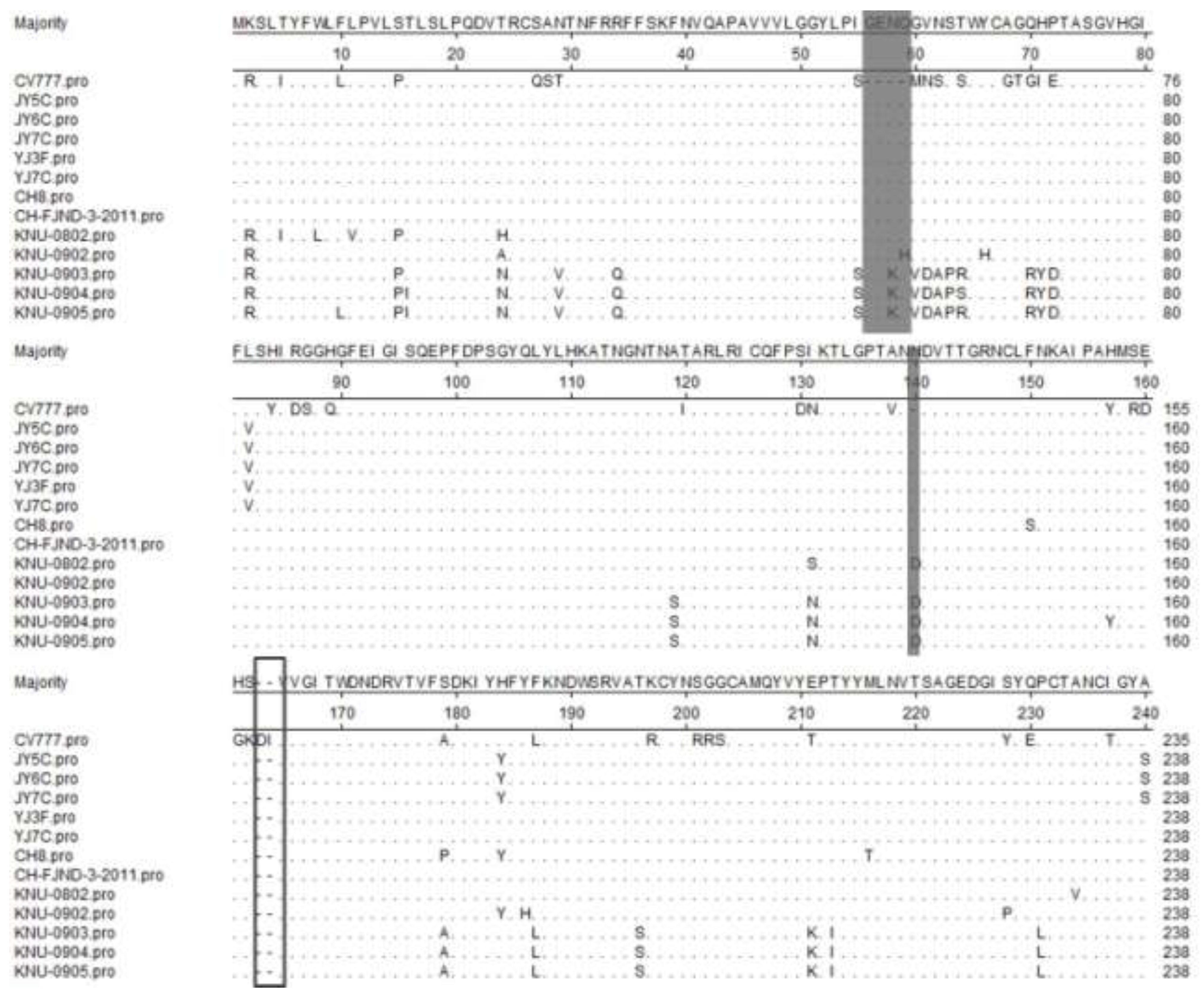 RT-PCR amplification and sequencing analysis of the full-length PEDV S genes were used to investigate the isolates from diarrhea samples from local pig farms with severe diarrhea in piglets. The variant strains were detected in this study, implying an identical distribution profile for PEDV on pig farms in Gansu, China. The sequence insertions and deletions in the S gene and mutations in the antigenic regions found in variant strains possibly provided stronger pathogenicity and antigenicity to the new PEDV variants that influenced the effectiveness of the CV777-based vaccine, ultimately causing the 2012 outbreak of severe diarrhea in the porcine farms of Gansu Province, China. Future studies should investigate the biological functions of these particular insertions, deletions, and mutations. 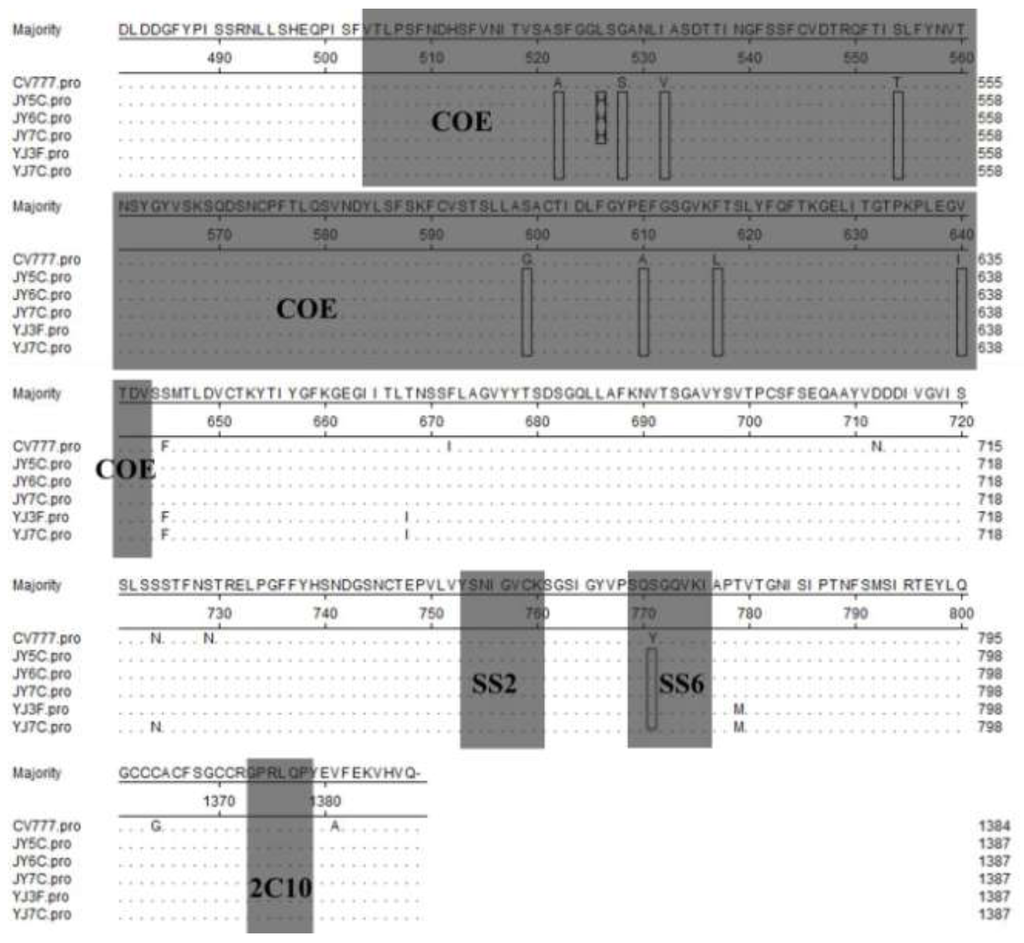 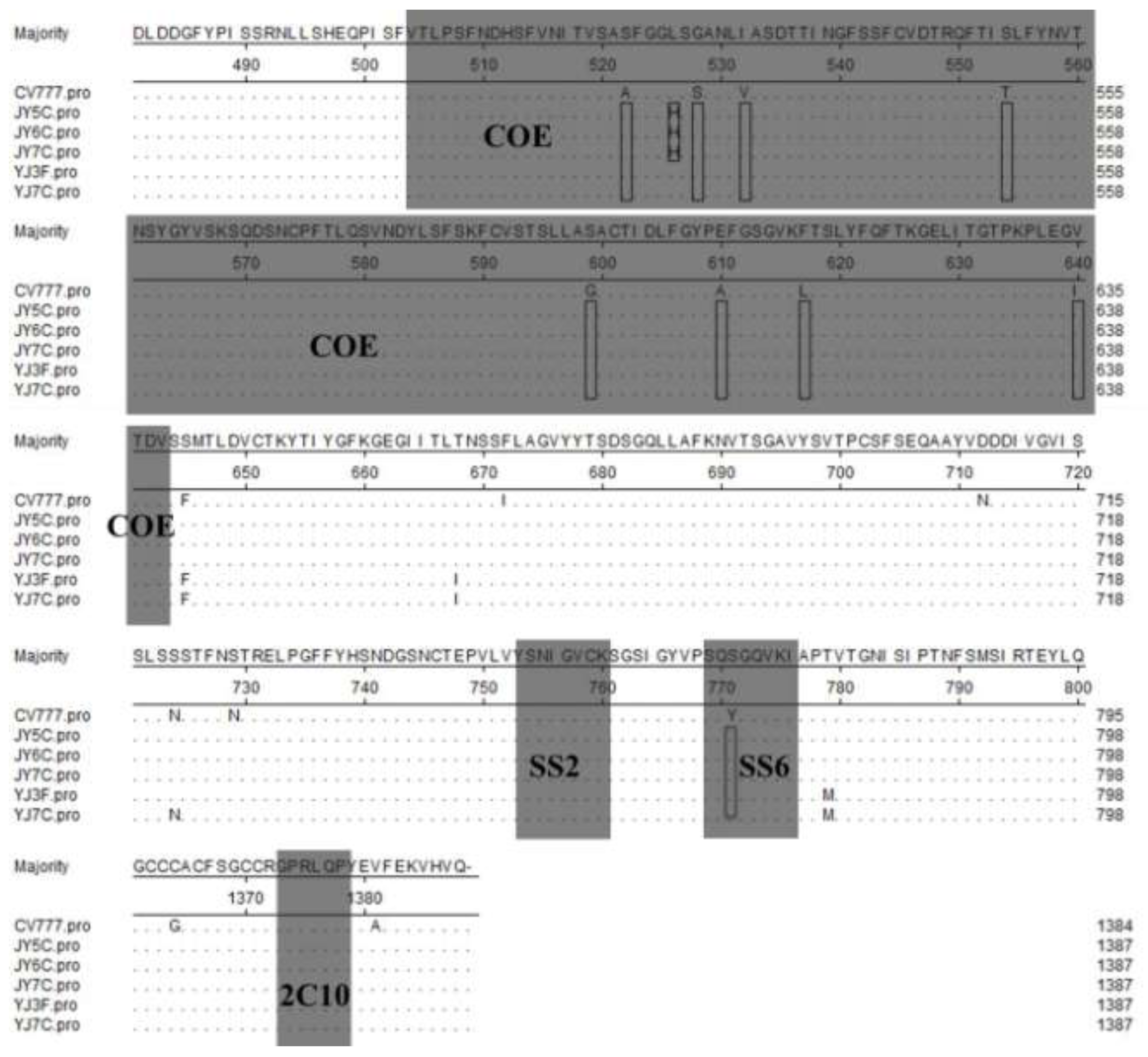 A total of 17 samples (fecal and intestinal) were collected from seven dead piglets showing signs of watery diarrhea and dehydration from two farms in Gansu Province, China (Table 3). These samples were collected individually and placed in separate sterile specimen containers. Samples were homogenized with PBS. The suspensions were vortexed and centrifuged for 10 min at 10,000 × g. The supernatants were stored at −80 °C before use.

All samples were evaluated by reverse transcription PCR (RT-PCR) using PEDV special primers (Table 4). In brief, viral RNA was extracted from the supernatants of the homogenized samples with TRIzol LS (Invitrogen Co., Carlsbad, CA, USA) according to the manufacturer’s instructions. RT was carried out using random hexamer primers (TaKaRa Bio Inc., Otsu, Japan), and the cDNA was immediately amplified with primers, which were designed based on the sequences of PEDV reference strains (Table 4) under the following conditions: denaturation at 95 °C for 5 min, 35 cycles of denaturation at 94 °C for 30 s, annealing at 52 °C for 30 s, and extension at 72 °C for 90 s. The RT-PCR products were analyzed by 1.5% agarose gel electrophoresis and visualized by ultraviolet illumination after ethidium bromide staining.

Table 4. Amplification primers for the S gene of PEDV in Gansu, China in 2012 a.
a PEDV, porcine epidemic diarrhea virus; P1, forward; P2, reverse. b Numbers correspond to the nucleotide positions within the CV777 genome. c Length of PCR products.

Five of 17 pig samples were positive for PEDV by RT-PCR. Sequencing analysis of the full-length S gene was performed for the five samples designated as JY5C, JY6C, JY7C, YJ3F, and YJ7C. In brief, bands of the corresponding size of the gene were excised, and the synthesized DNA was purified using a QIAquick Gel Extraction Kit (QIAGEN, Hilden, Germany) according to the manufacturer’s instructions and sequenced by BGI Company (Peking, China). The five PEDV S gene sequences were aligned with the sequences of 32 previously published PEDV S genes (Table 5) using the DNASTAR, DNAMAN, and MegAlign version 5.0 (DNAStar Inc., Madison, WI, USA) software packages [17]. To investigate their molecular and epidemiological characteristics and to determine their profile of genetic diversity, phylogenetic trees were constructed using molecular evolutionary genetics analysis MegAlign version 5.0 [17] with the neighbor-joining (NJ) method to calculate distance. Bootstrap values were estimated for 1,000 replicates. SignalP 4.1 software [18] was used to predicte the N-glycosylated sites.

There were few positives (5) by RT-PCR when 17 piglets with water diarrhea and dehydration were sampled. There may be two reasons for this phenomenon. Firstly, inability to amplify virus from all piglets might impact our results. Secondly, the piglets maybe have coinfections that might skew our results.
Our study of the full-length S gene revealed a more comprehensive distribution profile that reflects the current PEDV status in pig farms in Gansu Province, China, including the presence of strains similar to those from South Korea. These data indicate that the new variant PEDV strains in Gansu Province, which were first found in 2011, may have originated from South China. Thus, certain actions must be taken to prevent the continued transmission of this virus, including the development of novel vaccines for prevention.

This work was supported by the National Key Technologies R&D Program (No. 2013BAD12B04) and the Special Fund for Agro-scientific Research in the Public Interest (No. 201303042).