Inactivation of RNA Viruses by Gamma Irradiation: A Study on Mitigating Factors

Local Innate Responses to TLR Ligands in the Chicken Trachea

Avian influenza virus (AIV), which belongs to the family of Orthomyxoviridae, is an enveloped virus with a negative sense, single-stranded and segmented RNA [1]. With recent outbreaks of highly pathogenic avian influenza (HPAI) and low pathogenic avian influenza (LPAI) viruses, there is a need for better understanding of host responses, especially in the respiratory system to AIVs in order to develop and improve prophylactic procedures for control of AIV. Following infection of the respiratory tract with AIV, the host must produce appropriate immune responses in a short period of time to limit viral replication and eliminate the virus.
Host immune responses in the respiratory system, including innate and adaptive immune responses, are elicited by pathogens. Innate responses provide the first line of defense against influenza virus at mucosal surfaces aiming to block the entry of the virus and viral replication. However, when the virus passes the preliminary barriers, the airway epithelial cells are the primary target for the virus. Pathogenicity of AIV in chickens is initiated by the same phenomenon as mentioned above, by infecting the tracheal cells by influenza virus [2,3]. In chickens, despite the absence of essential lymphoid tissues or mucosa-associated lymphoid tissues in the trachea, the trachea is able to mount immune responses against different pathogens [4,5,6,7]. Chemoattractants produced by the trachea recruit other cells of the immune system, such as macrophages and lymphocytes, toward the trachea to limit spread of the virus [4,5,6,8]. Airway epithelial cells are of prime importance in host responses against AIV. AIV replicates in epithelial cells, and these infected epithelial cells then transport viral antigens to antigen presenting cells [9,10].
The attachment and entry of influenza virus into the host cells depend on the expression of sialic acids (SAs) and terminal sugar residues—such as galactose (Gal), N-acetylglucosamine (GlcNAc) or N-acetylgalactosamine (GalNAc)—by epithelial cells [11]. Chicken tracheal epithelium contains three types of cells (ciliated cells, goblet cells and basal cells) which express both SAα2–6Gal and SAα2–3Gal linkages [12]. However, distribution and expression of these receptors vary among different types of chicken tracheal cells [12,13]. AIV replicates in all types of cell of the tracheal epithelium, however, ciliated cells are more sensitive to AIV compared to goblet and basal cells [3,12].
Once the virus infects the host, host cells detect the presence of viral components by means of germline encoded pattern recognition receptors (PRRs). There are some differences between mammalian species and chickens in the way they sense presence of the virus via PRRs. In vertebrate species, three types of PRRs engage to recognize influenza virus: Toll-like receptors (TLRs), nucleotide oligomerization domain (NOD)-like receptors (NLRs) and retinoic acid-inducible gene-1 (RIG-1)-like receptors (RLRs) [14,15,16]. In mammals, TLR3 plays a key role in recognition of double-stranded RNA (dsRNA) once the virus replicates in host cells [14,17]. While the NLR and the RLR families recognize the presence of the virus in the cytosol of infected cells, TLR7 senses the presence of viral RNA in the endosome of host cells, such as plasmacytoid dendritic cells (pDCs) [18]. Like mammalian species, several PRRs including TLRs and RLRs have been recognized in chickens. In chickens, the expression of TLRs in trachea is up-regulated following AIV infection [19]. Despite the lack of RIG-1 in chickens to sense AIV infection, AIV is sensed intracellularly by chicken melanoma differentiation-associated protein 5 (chMDA5), which results in the expression of type I interferons (IFNs). ChMDA5 and downstream mediators of cell signaling, such as mitochondrial adaptor molecule CARDIF and chicken interferon regulatory factor 7 (chIRF7) are necessary to induce antiviral responses [20,21].
The activation of PRRs and intracellular signaling pathways result in the production of type I IFNs and pro-inflammatory responses. Type I IFNs trigger an orchestra of antiviral responses against influenza viruses including the expression of IFN-stimulated genes (ISGs) to limit the viral replication and induce adaptive immune responses [22]. In chickens, type I IFNs including chIFN-α and chIFN-β induce the expression of ISGs, such as protein kinase R (PKR) and the 2′–5′ oligoadenylate synthetase (2′,5′-OAS) [23]. Downstream ISGs, such as IFN-induced transmembrane protein (IFITM) and viperin interfere with the viral replication cycle at different stages [24,25,26].
TLR ligands have been successfully used in chickens as adjuvants or stand-alone antiviral reagents [27,28,29,30,31]. These studies have demonstrated that TLR ligands induce the expression of TLRs and antiviral responses and the production of cytokines and chemokines. TLR2, 4, and 21 ligands have been employed in vitro to treat chicken macrophages prior to AIV infection and resulting in the reduction of AIV replication in chicken macrophages [31]. The same panel of TLR ligands and the ligand for TLR7 have also been administrated in vivo in chickens to induce antiviral responses and resulting in the reduction of AIV shedding in infected chickens. These TLR ligands reduced oral and cloacal viral shedding in infected chickens. TLR21 ligand CpG ODN 1826 is the most efficacious TLR ligand to reduce oral viral shedding, while TLR4 ligand lipopolysaccharide (LPS) from Escherichia coli (E.coli) 026:B6 causes the highest reduction in cloacal viral shedding [29]. However, there is little information about induced antiviral responses in the chicken respiratory system following treatment with TLR ligands and the underlying mechanisms which are involved in the induction of antiviral responses. The purpose of this study was to determine first whether the chicken trachea responds to TLR ligands, and second whether these responses induced by TLR ligands are capable to limit AIV replication. In this study, we profiled antiviral responses in the chicken trachea following stimulation of tracheal organ culture (TOC) with TLR ligands. We also confirmed that soluble factors, secreted by chicken tracheal cells stimulated with TLR ligands, had antiviral activity against AIV.

TOC was performed as previously described with some modifications [2]. Briefly, tracheas were aseptically collected from 20-day-old specific-pathogen-free (SPF) chicken embryos. Tracheas were washed twice with warm Hanks’ balanced salt solution (HBSS, Gibco, Burlington, ON, Canada) to remove excess mucus. The connective tissues surrounding the trachea were removed by careful dissection. Tracheas were dissected manually into 1 mm rings using a microtome blade. Five tracheal rings from one embryo were transferred into 24-well culture plates containing Medium 199 (Sigma-Aldrich, Oakville, ON, Canada) supplemented with 25 mM 4-(2-hydroxyethyl)-1-piperazineethanesulfonic acid (HEPES) buffer (Gibco), 200 U/mL penicillin, 80 µg/mL streptomycin, and 50 µg/mL gentamicin. Rings were incubated at 37 °C on a low speed rotator for two hours and then the medium was replaced. During the experiments, the ciliary activity of the tracheal rings was monitored.

A/Duck/Czech/56 (H4N6), a low pathogenic avian influenza virus (LPAIV), was used in this study. The virus was propagated in 11-day embryonated chicken eggs. Virus propagation and titration were carried out as previously described [32].

2.3. Stimulation of TOC with TLR Ligands

Total RNA was extracted from five tracheal rings using Trizol reagent (Life Technologies, Burlington, ON, Canada), according to the manufacturer’s recommendations. There were 6 biological replicates in each group and each replicate contained five rings of trachea from the same individual embryo. DNA-Free™ kit (Ambion, Austin, TX, USA) was used to remove contaminating DNA from RNA samples before cDNA synthesis. One microgram of RNA was used for cDNA synthesis. Superscript II First Strand Synthesis kit (Life Technologies) and Oligo(dT)20 primers were used for cDNA synthesis according to the manufacturer’s protocols. Quantitative real-time PCR was performed on diluted cDNA (1:10 in DEPC treated water) using a SYBR green dye in a LightCycler 480 II (Roche Diagnostics, Laval, QC, Canada) as previously described. Specific sequences of primers were described previously [29,30,31].

In conclusion, we have demonstrated that chicken tracheal organ cultures are able to mount antiviral responses after stimulation with different TLR ligands. This was confirmed by examining gene expression in tracheal organ cultures. Supernatants harvested from organ cultures treated with TLR ligands had the capacity to activate macrophages and limit AIV replication in these cells. Future studies are required to evaluate the relative importance of the molecules, especially the ISGs, which we have measured in the present study.

Funding for this study was provided by the Ontario Ministry of Agriculture, Food and Rural Affairs (OMAFRA) and CPRC-AAFC Cluster funding. Neda Barjesteh is a recipient of the Alexander Graham Bell Canada Graduate—NSERC Scholarship. 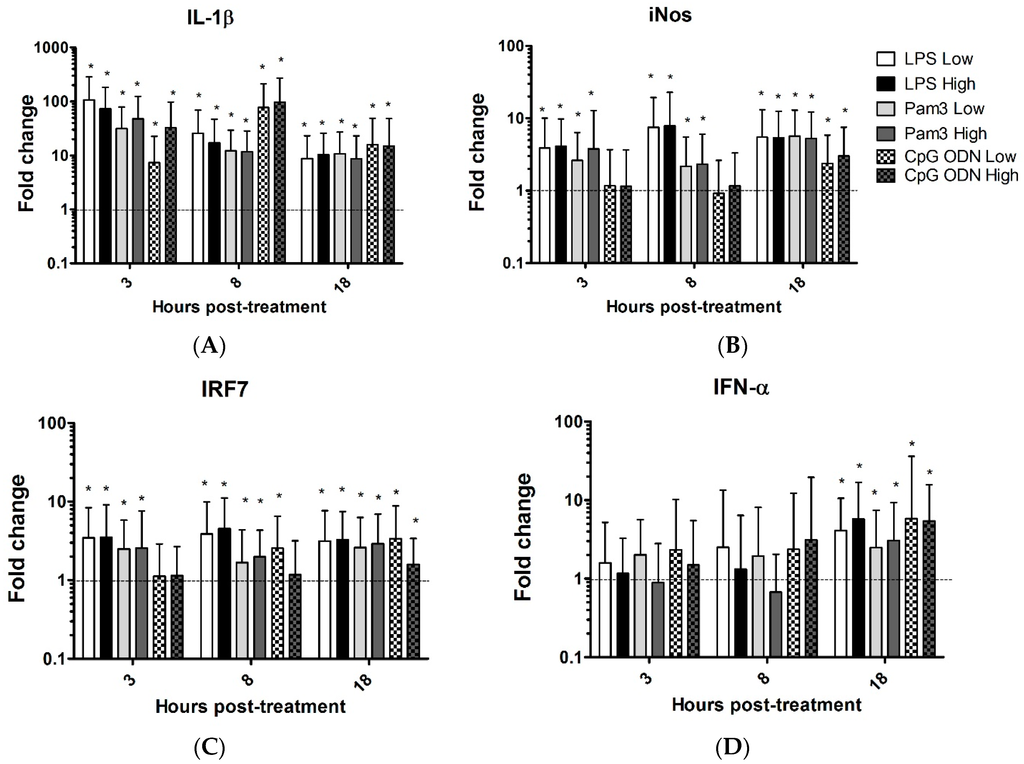 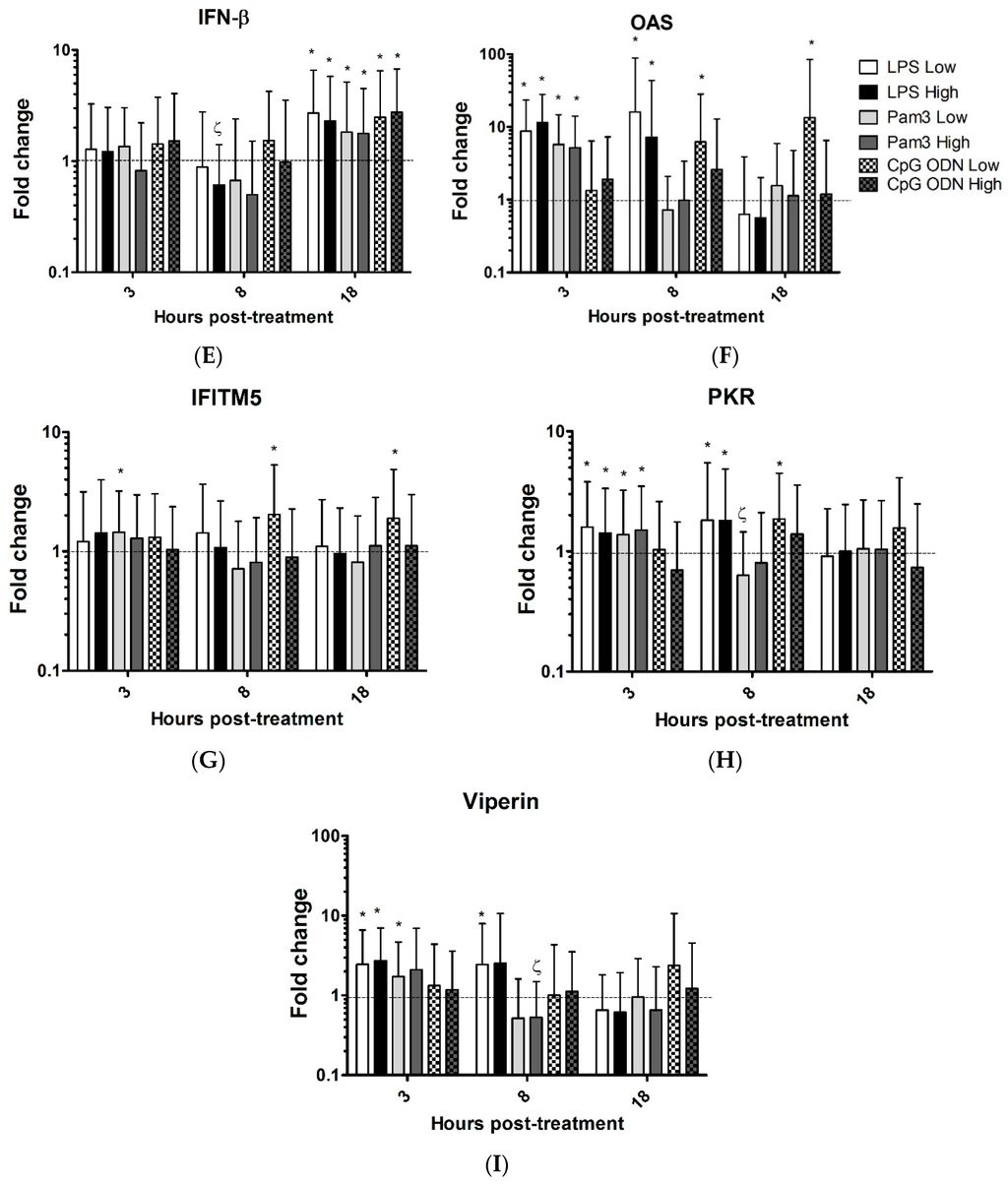 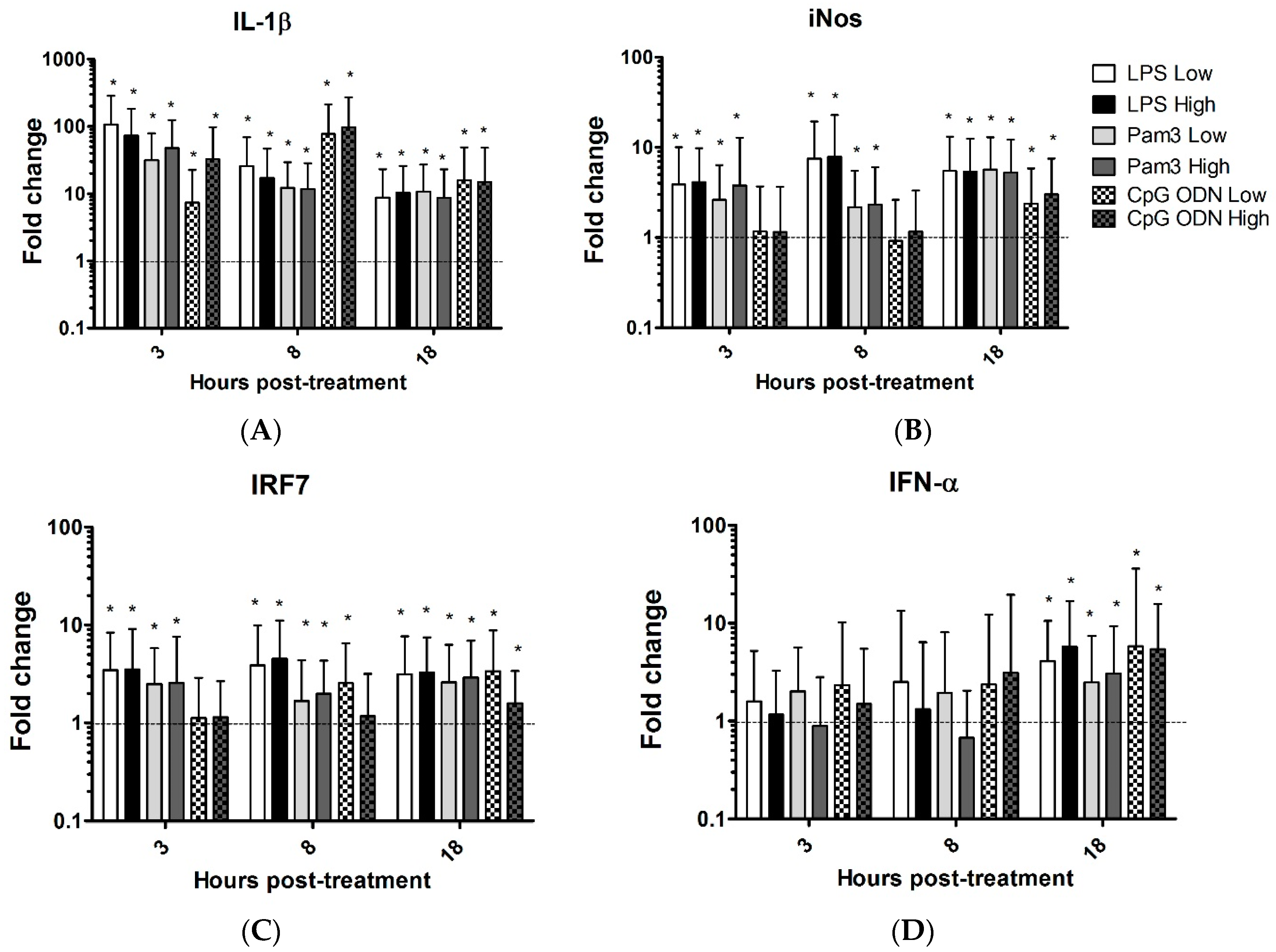 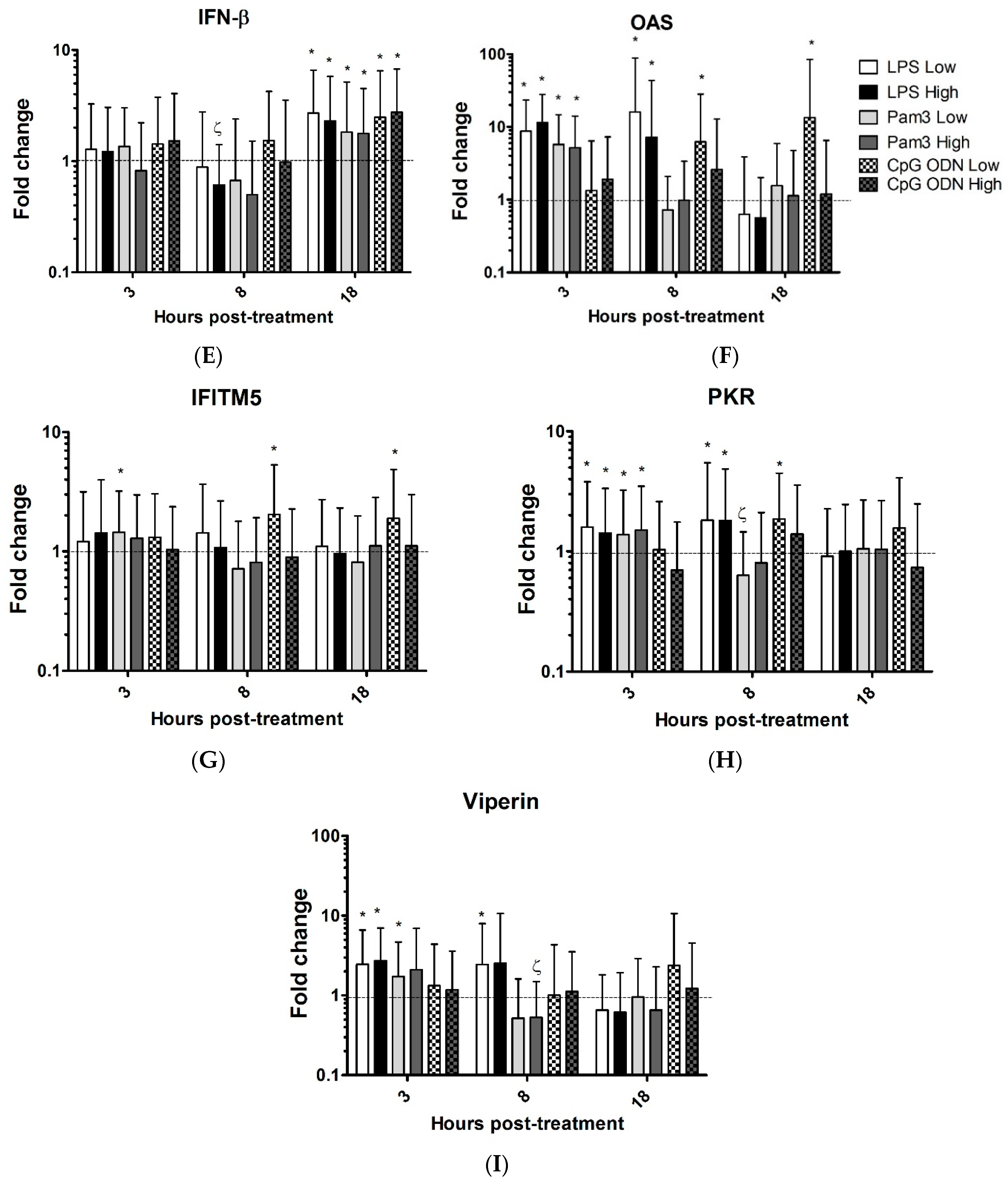 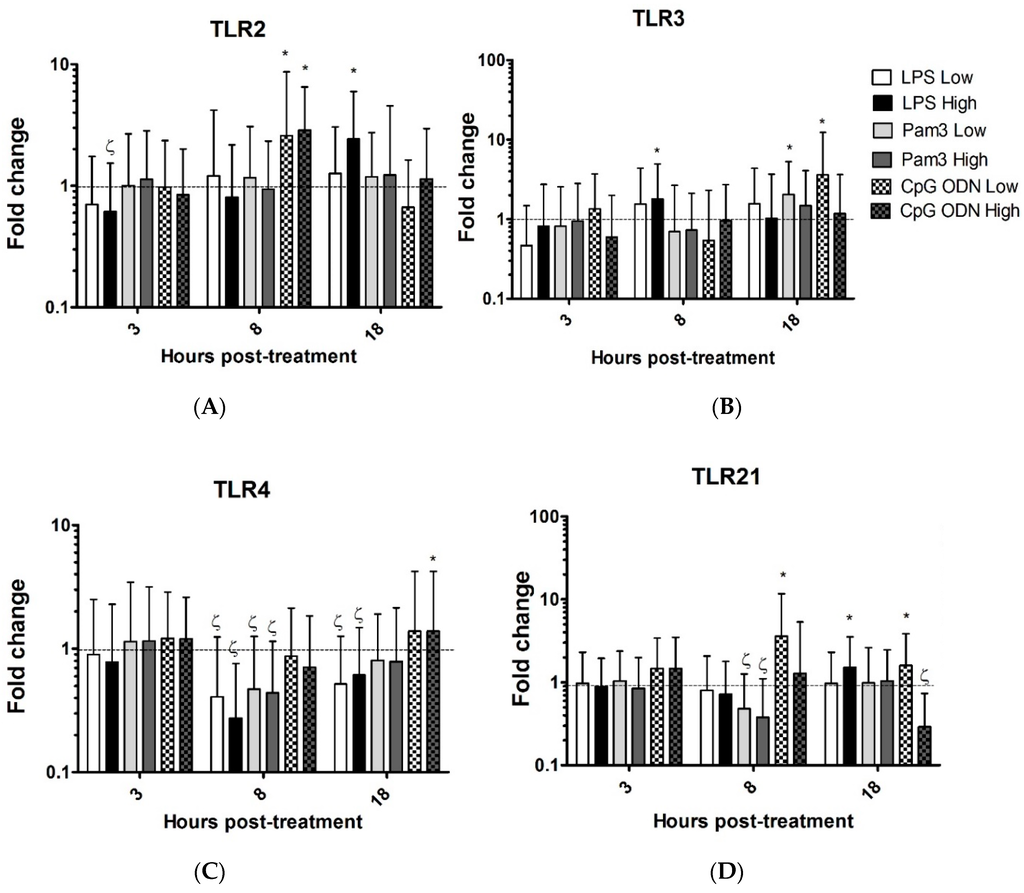 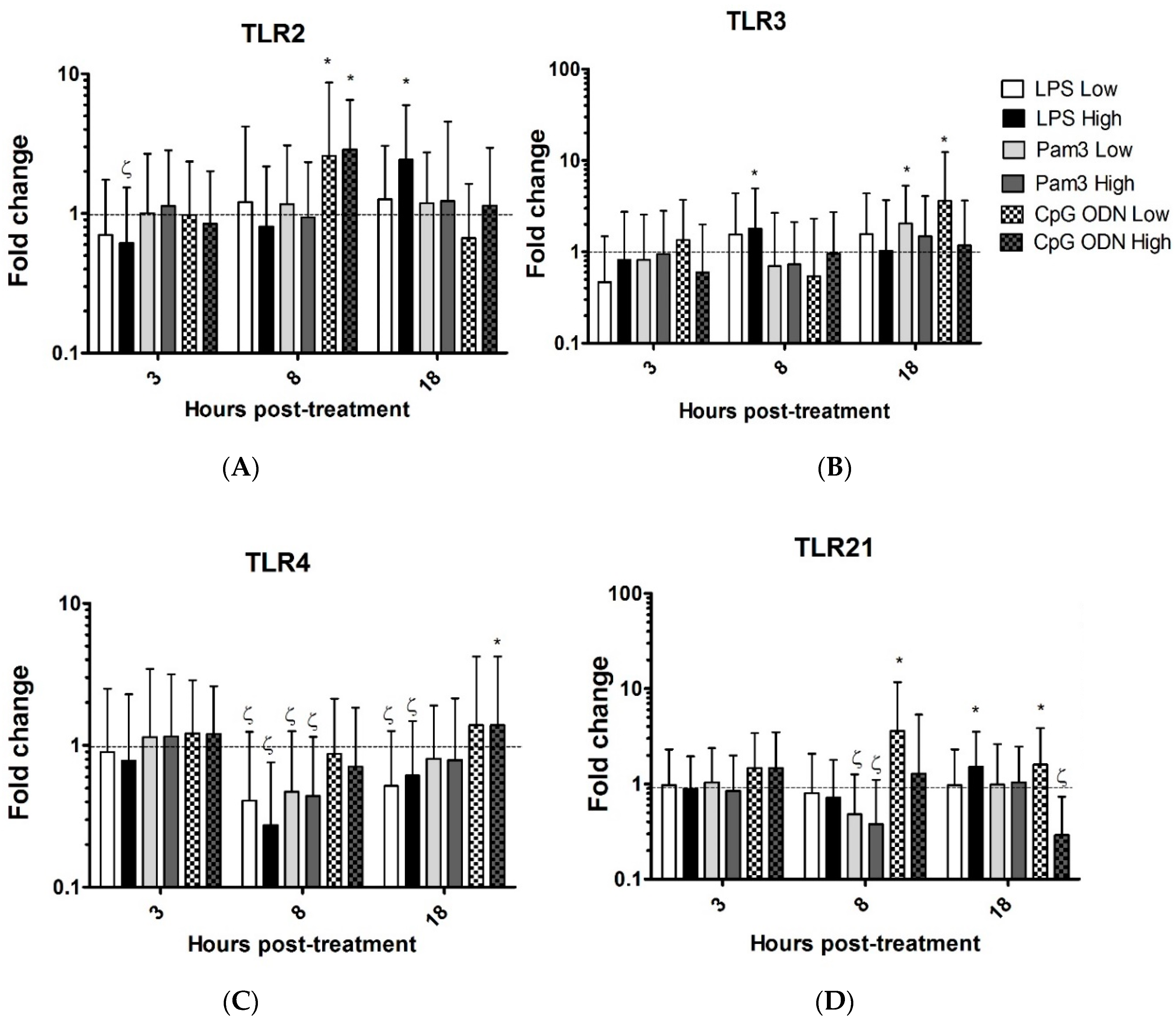 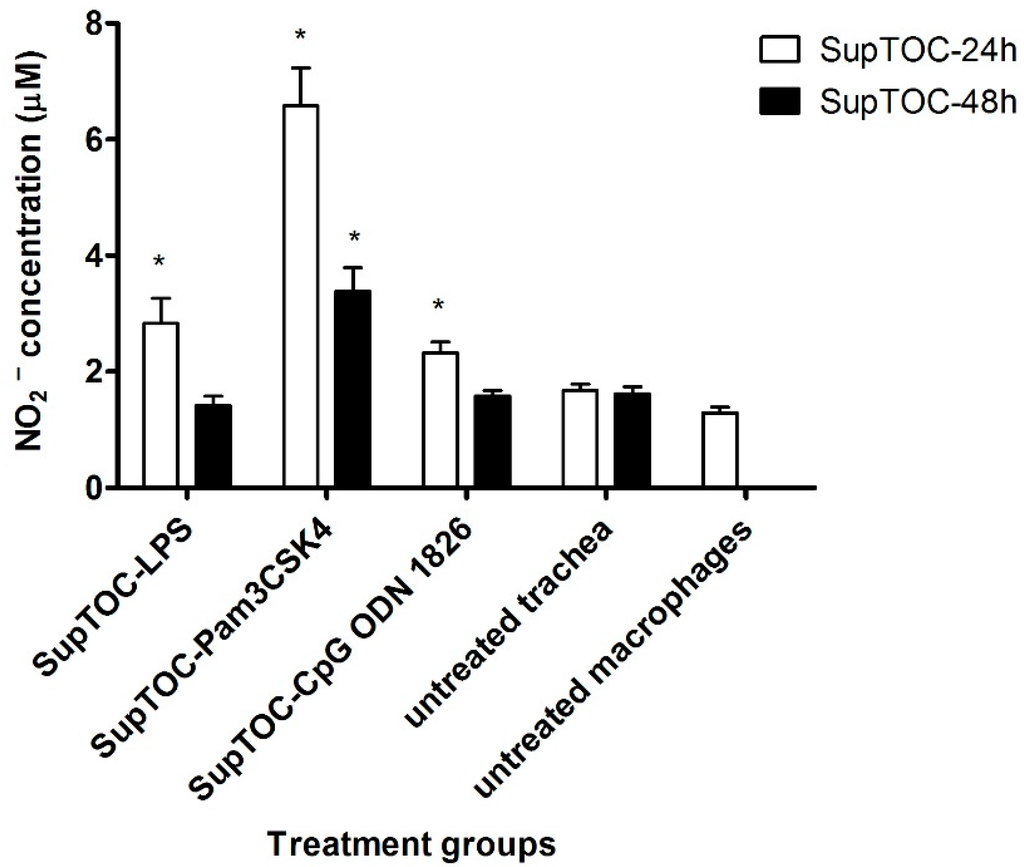 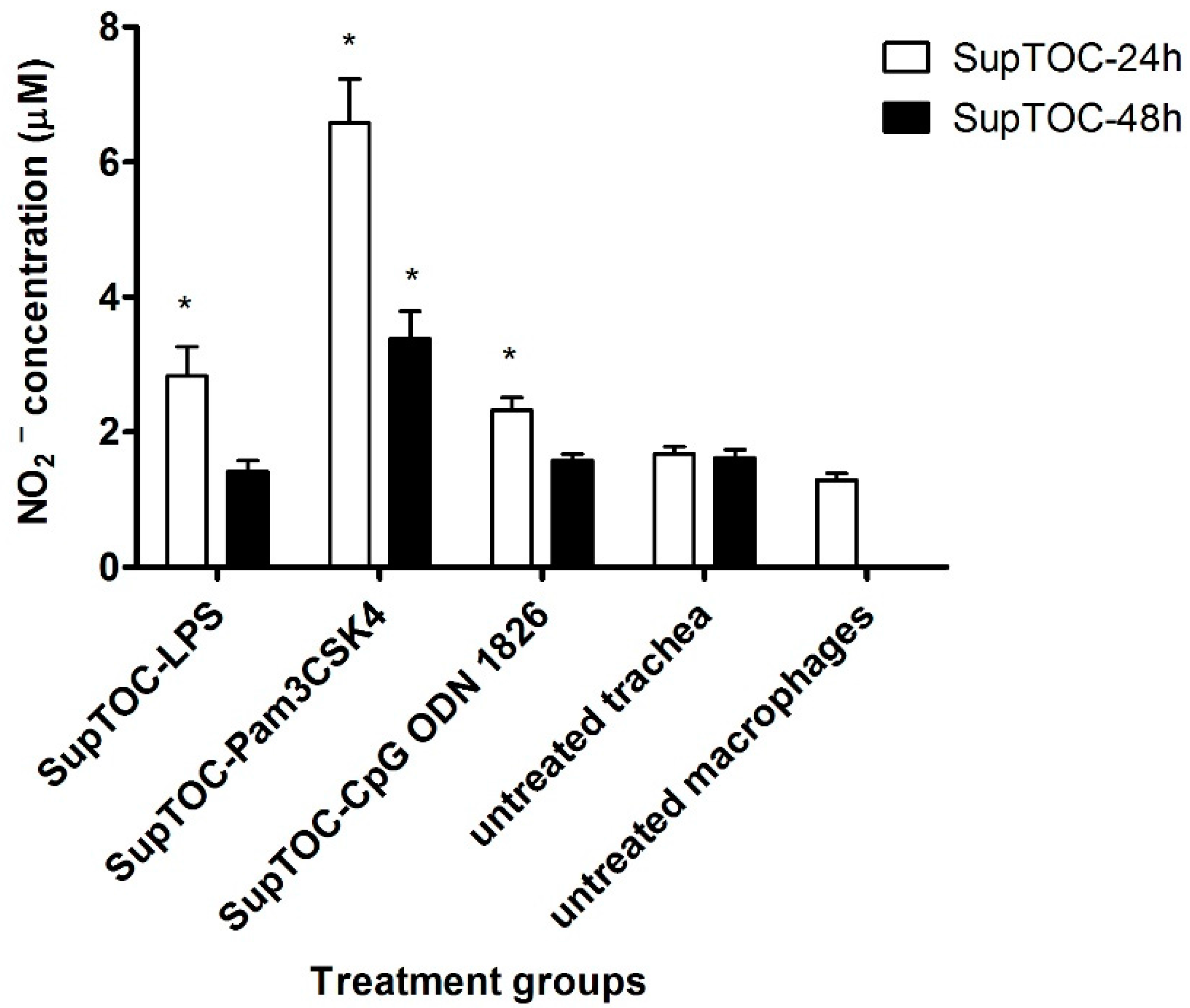 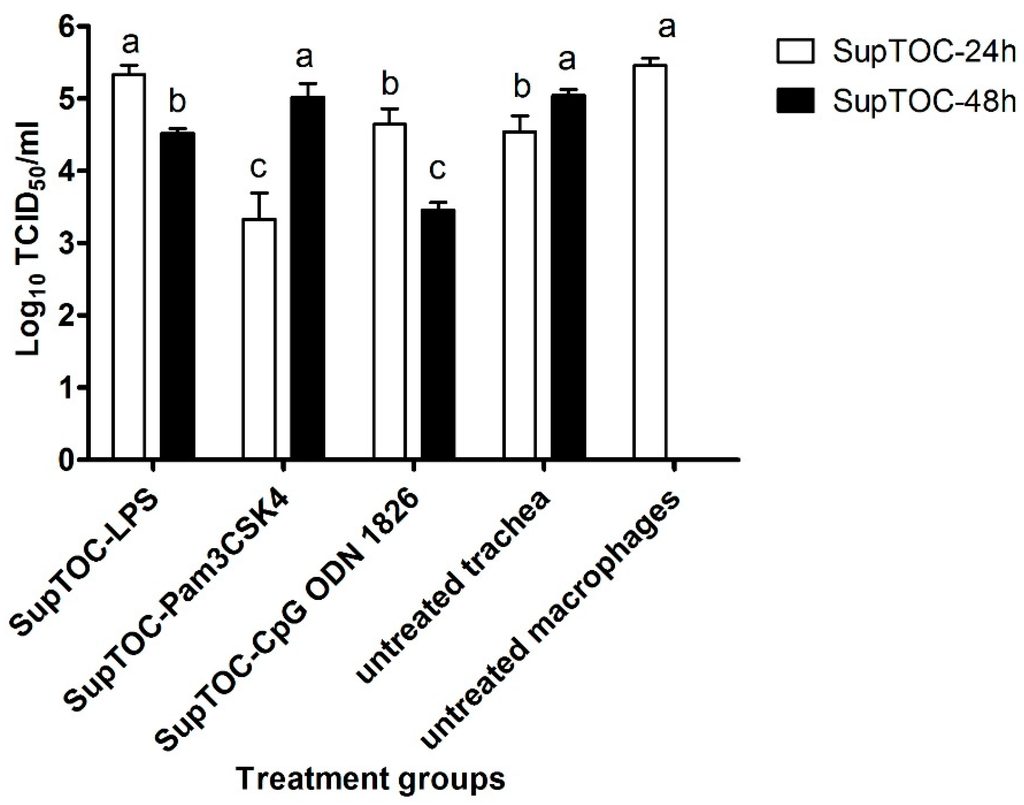 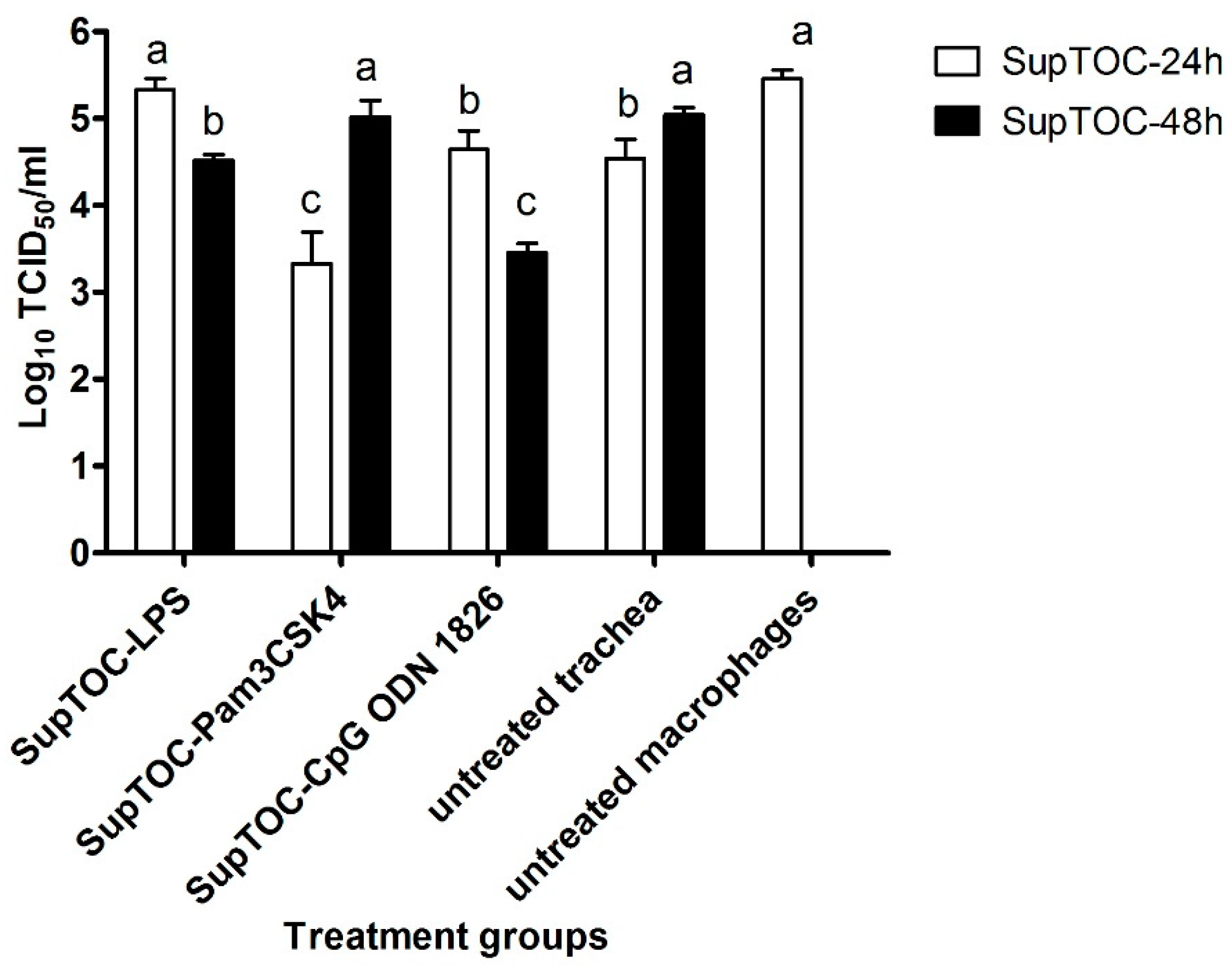